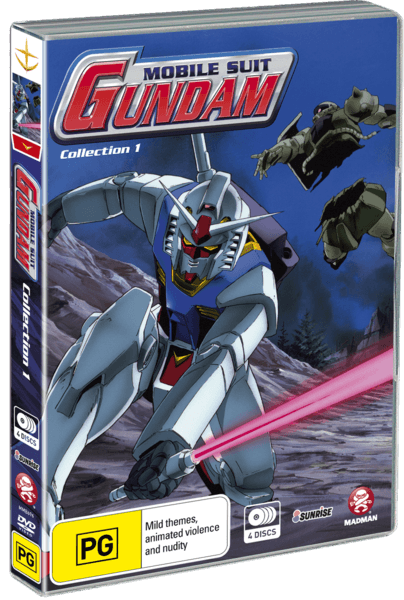 Overview
If the success of the Transformers movie franchises teaches us anything about people, it’s that audiences love giant robots. The Mobile Suit Gundam Series has stood as one of the longest running anime franchises of all time. While many viewers of anime may be familiar with the more recent Gundam series, such as Gundam Wing and Gundam 00, which were quickly adopted by western audiences, the original Mobile Suit Gundam has not had the same level of exposure in the West. However, to this day it continues to be a cultural phenomenon in Japan. You know a series has to be doing something right when an entire 1/1 scale model of the original Gundam is built in its honour. To fans of the newer series’, don’t write off the original Mobile Suit Gundam before you have a chance to truly experience it for yourselves, as the granddaddy of mech genre anime has returned, remastered for DVD. 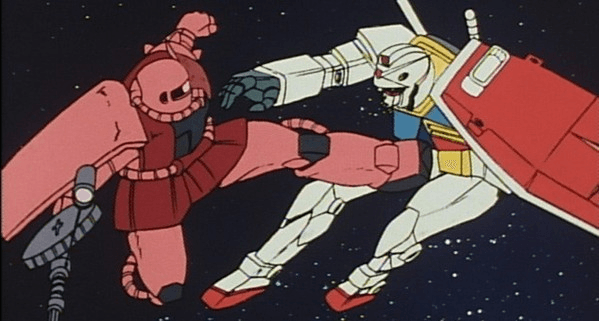 Story
The plot of Mobile Suit Gundam laid the groundwork for many successive series of anime bearing the Gundam trademark. But how many people can honestly say they know where it all began? The year is UC0079 of the universal century. As one might come to expect from Gundam series’ by now, the series set in the future. Humanity’s ever growing population has forced our race to move into outer space to accommodate our ever growing numbers. In the decades since the first humans began the migration into outer space, a large group of space faring people have declared war on the Earth Federation, seeking independence for themselves, outside of the rule of the Earth-born elite. Calling themselves the Principality of Zeon, the space fairing rebels ignite a war in the name of independence. 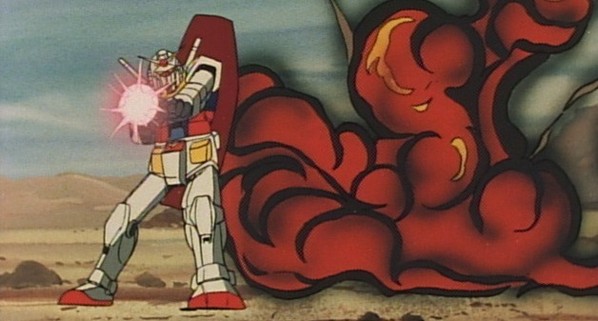 So where does the Giant Robot fit into all of this? Mobile Suits, such as the Gundam are now the standard of weapons utilised in this futuristic war. A young engineer by the name of Amuro Ray becomes roped into the conflict when his home is attacked by Zeon forces, leaving him no choice but to use the Gundam at his disposal to fight for the Federation and ensure a future peace, free from war. What Amuro clearly did not expect was to discover that the Gundam may very well be the most advanced war machine in history. Thus armed with the knowledge to pilot it, as well as the technological advances made to the mobile suit, Amuro now fights on the side of the Federation in an effort to quell the Zeon Uprising once and for all, and return peace to the Earth and Space. However, his task is monumental, as the suddenly gains the attention of an elite Zeon solider by the name of Char Aznable. With this elite pilot after him, and the war with Zeon claiming more lives every day, Amuro will need to learn fast if he is to save the Federation, as well as his own hide.

As anime plots go, this might seem cliché to the average anime viewer. What audiences should keep in mind is the fact that this anime was released in 1979. While it would not exactly be the anime you watch for an original plot, the ongoing story of Mobile Suit Gundam is well told, and was most likely considered groundbreaking during the time of production. While the pacing can sometimes feel a bit off, the series maintains a strong hold on continuity from one episode to the next. In each successive episode, the characters learn new lessons and develop deeper personalities. Amuro’s development from an awkward mech otaku to a full-fledged expert pilot is not something that happens instantly, but after many battles that temper his skills and abilities. Similarly, Char’s growing obsession with defeating the Gundam is something that begins with a mild curiosity on his part. However, over the course of the series this develops into one of the greatest anime rivalries of all time.

Visuals
For a 30 year old anime, I was actually quite surprised at the level of detail that was used to augment both social interactions between characters, but also the many battles that would be experienced throughout. I came into the series expecting it to be severely weathered and aged, with an expanse of reused footage for combat scenes. Boy was I wrong. While the colouration and effects most certainly reflect the series’ 1970’s origins, the expanse of unique combat footage really surprised me. One of the drawback I felt with other anime series, like Gundam Wing for instance was an overabundance of reusable footage for battle scenes. While a little bit of this RF can be seen in scenes like the catapult launch, by and large the battles are displayed with a generous helping of unique animation. While certain scenes might seem slow in terms of combat pacing, the anime does a great job at making the fights as intense as possible given the restraints of visual technology 30 years ago. 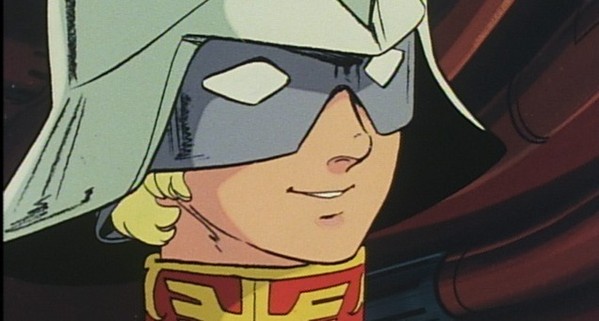 For many, the colour schemes and character modelling will seem to bright for an anime all about war and giant killer robots. This is again reflective of the original release. This is not to say however, that it is a bad thing. Viewers will still feel like the whole ordeal is a war by virtue of the animation style that maintains a strong feeling of empathy and realism to everything within the confines of the universe. Wacky slapstick anime styling’s won’t be found in this anime. It’s serious business from start to finish. More than anything, despite the rather odd colouration, the series visuals are pleasingly consistent from episode to episode. When the series wants to visually represent drama, action or even hints at romance, it does so with a very unique visual flair that you would be hard pressed to find in any other franchise.

Audio
The first thing I feel I have to get out of the way is to again stress that this anime was originally aired in 1979, a long time ago when sound technology was no-where near as sophisticated as it is today, and in a time where music impacted on the appeal of the anime to a much lesser extent. That said, the opening theme song, while certainly old-school, can get downright painful to listen to. The vocals have not aged well, nor has the soundtrack. That aside however, the musical scores used in the anime itself are well adapted, and the sound is crisp and fluid. It’s fairly obvious that the remastered DVD version of the anime has taken into consideration the benefit of remastering the audio for DVD quality. The soundtrack does a great job at complimenting the visuals, and providing the necessary fuel to draw out emotional responses from the viewers. For instance, the audiences will tense up in anticipation when they know Char Aznable is on the attack. 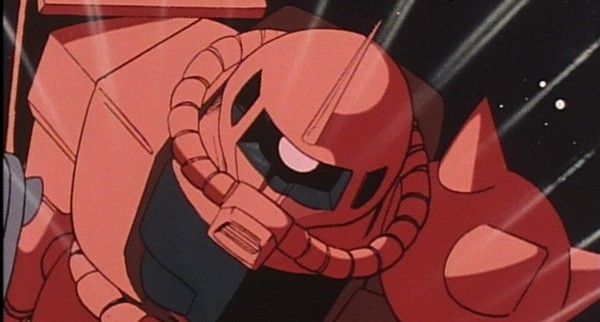 As for the voice acting, like many English Dubbed animes it’s a really mixed bag of quality. Many of the voice actors are recycled veterans of other series, including Brad Swaille (who previously voiced characters such as Setsunna F Seiei, Quatre Winner), Scott McNeill, Brian Drummond and Tom Edwards. It must be said that the VA work of many of the characters, particularly Char and Bright Noa are done exceptionally well. Brad Swaille also does a great job, though at points I think some of the lines perhaps could have been translated better so they wouldn’t sound too long winded. However, seeing the application of a modern VA cast to a series that is over 30 years old, and seeing it pulled off reasonably well will bring a smile to the face of many fans like myself.

Extras
Mobile Suit Gundam Collection 1 is the first DVD collection release to offer both English and Japanese Dubs, providing audiences with the opportunity to watch and compare the remastered English dubbing with that of the original Japanese vocals, accompanied by subtitles. Anyone who is a hardcore Gundam fan should consider watching a few episodes, switching in tandem between the two different dubs to see how the series was originally intended to be viewed. 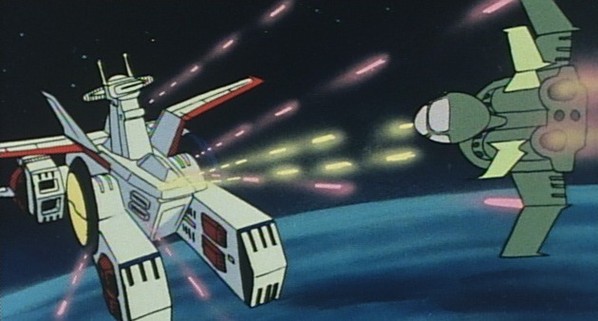 Overall
Regardless of whether or not you are a retro fan or new age Gundam fan like myself, you’ll find plenty to enjoy about Mobile Suit Gundam. After all this is where the series began. Even as a cartoon that is over 30 years old, the anime still holds up today. One thing it can attest to above all else is how well it has aged. Being the first time I’ve been introduced to the series that started it all, I found myself enjoying every moment of the story, as well as every mech battle. Some might call it old, but I think a more accurate way to describe it would be vintage. A series left to age, but in a way in which it feels strong in many degrees for it. If audiences are able to look past some of the visual dust, they will find a real gem of anime beneath the ageing exterior. Knowing that it has spawned some of my favourite series like Gundam 00 and Gundam Wing, Mobile Suit Gundam is a series that comes highly recommended to anyone that loves their mech anime, or for anyone that’s up for a good old fashioned dose of action and robotic ass kicking.