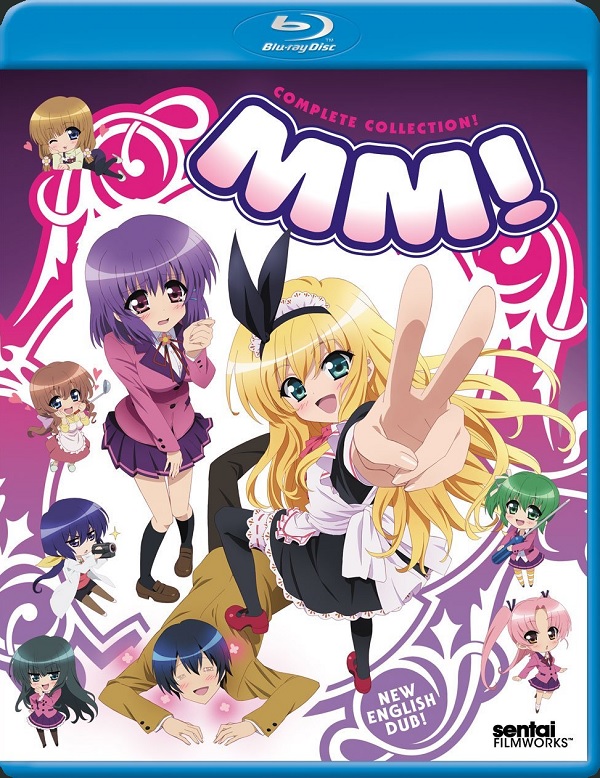 Overview
Sentai Filmworks is a company that licenses a large number of anime for Western release but not all of their titles are given an English dub. However over the past few months the company has started to revisit some of their more popular sub-only titles and re-release them with not only an English dub but on Blu-ray as well. The latest title to be given this treatment is MM! a series originally released in North America in late 2011. With a new English dub and an updated format, is MM! worth the extra effort?

Story
Taro Sado might seem like a relatively normal high school boy, but he has a dark secret that he tries to keep hidden from those around him. You see, Sado is a masochist and he isn’t just any normal masochist who might like being told off a bit by a woman, he is a super masochist to the point where anything abusive from women will cause him pure bliss, whether it is extreme physical punishment or being called a flea-ridden mongrel. Even the potential for death doesn’t seem to bother him all that much compared to the pleasure he would receive from such abuse. 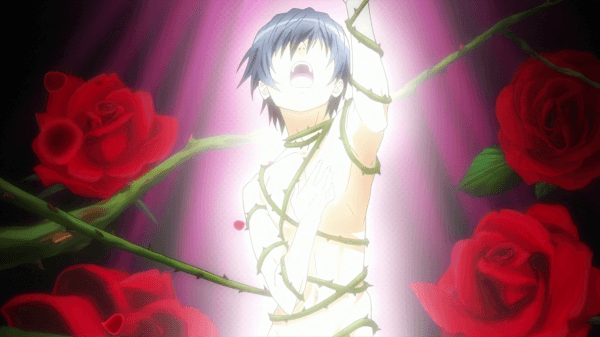 This problem caused Sado to be ostracized during middle school when the problem started and he only has his close friend Tatsukichi now. This secret is holding him back from confessing to his first love and at the suggestion of his longtime friend Tatsukichi, Sado seeks the help of the Second Voluntary Club which has been established to try and help out students with troubles. Realizing that his condition is problematic, Sado seeks the clubs help.

However when he arrives there he isn’t quite sure what to expect as he encounters a charming girl named Mio Isurugi willing to assist him. Thinking he arrived in the wrong place, Sado tries to excuse himself only for this same smiling girl to suddenly assault him and threaten him for trying to blow her off. Sado quickly realizes that the other two members of the club have just as many complexes as he does. 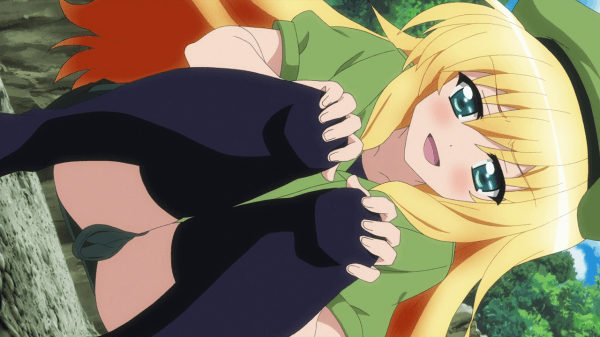 Mio happens to be a brutal sadist who also has an extreme superiority complex where she sees herself as a god that wants to grant wishes to people in need while the other girl, Arashiko Yuno is the same girl who originally exposed Sado’s masochistic nature and has an extreme case of androphobia causing her to violently attack any man that touches her. With Yuno constantly attacking him whenever he is close and Mio savagely trying to beat the masochism out of him, the club only seems to exasperate his condition.

Over the course of the series more rambunctious perverts appear and center themselves on the club. There is a cross-dressing friend that, when dressed as a woman, begins to act like a high class lady that stands over commoners, a brilliant scientist with a young appearance and her lolicon assistant, a school nurse that loves to have the girls dress up in cosplay outfits and take photos of them, a girl with strong lesbian tendencies, incestuous feelings from Sado’s mother and older sister and more. 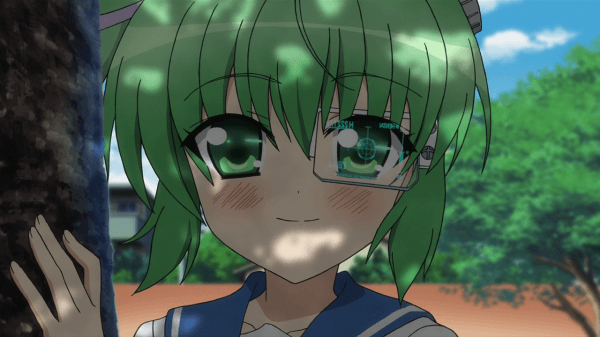 MM! is a hot pot of every perverse tendency mixed together to create an outrageous romantic comedy with a few pieces of drama laced scenes distributed sparingly. Almost all of the comedy in MM! comes in the form of slapstick as Mio doesn’t seem to realize her intense sadistic personality and continues to thrash Sado in every way imaginable even while he happily enjoys every minute of it.

There are a number of running gags at use throughout the series as well, mostly played off of the various perversions each character has, Mio’s flat chest, Yuno’s androphobic nature causing her to ruin touching moments at the slightest touch, and finally the way Sado reacts to everything that is happening around and to him. There are also a few references to other series, such as Sado turning into a Super Masochist via Dragon Ball Z transformation, and again this is used for comedic purposes. 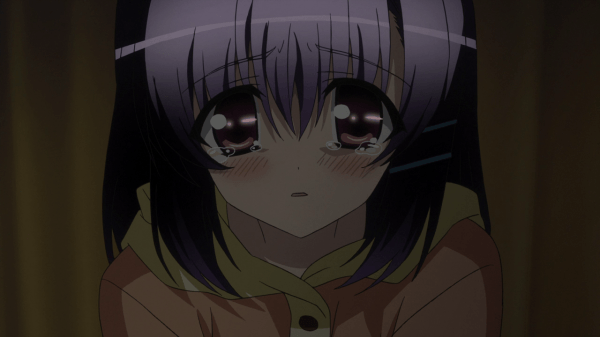 MM! is more than just a comedy about perverts, as it also has a few key pieces of character development that come to light over the course of the series. Yuno’s androphobia is a major issue that is explored in the beginning of the series as we learn exactly what caused her to become so afraid of men and adopt the policy of hitting them before they hit her. In this story we also learn that while Sado might be a masochist to the core, he is still an upstanding guy that does not want to see anyone upset and will go to any length to stop something bad from happening to others.

The romantic side of things pops up sparingly throughout the series, with Sado slowly developing a very minor harem by the end of the show. There is one obvious pairing focused on for most of the series but viewers are also shown that there is a love triangle afoot despite the one girl not wanting to admit her developing feelings for Sado. 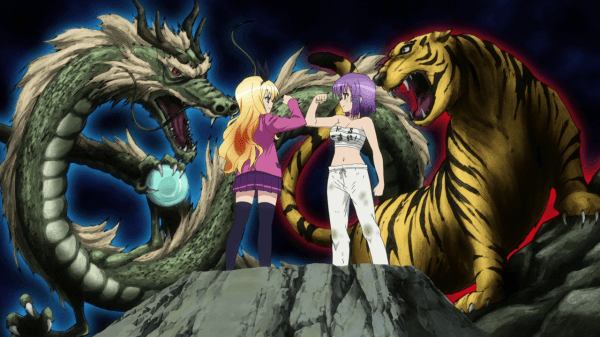 While Yuno and Sado are explored and developed, unfortunately viewers only get to see a few hints about Mio’s past and why she is doing what she does. Outside of a few minor arcs the storyline of MM! simply continues to follow Sado, Yuno, and Mio as well as other perverts as they try to get along and maybe cure Sado’s masochism but in the end nothing is really resolved. Despite this, MM! offers a hilariously enjoyable viewing experience with a few missteps here and there.

Visuals
MM! is uses a variety of brightly colored character designs and backgrounds and now that the series has been released on Blu-ray, these colors look better than ever before. The character designs are a bit simplistic and have many of your standard anime stereotypes but as far as their outfits go, rarely will there be an episode where a female character isn’t cosplaying or wearing a different outfit than the standard school uniform.

As mentioned before, a lot of the comedy comes in the form of slapstick and sight gags and many of these sight gags are based around how Sado reacts to the various forms of torture he is put through. His facial expressions and reactions as he becomes lost in the pleasure of his super masochism are well used throughout the series and almost always are good for a laugh. That being said, there are a number of extremely cheap looking scenes spread throughout MM! and the quality of the character’s facial designs becomes abysmal at mid-distance. 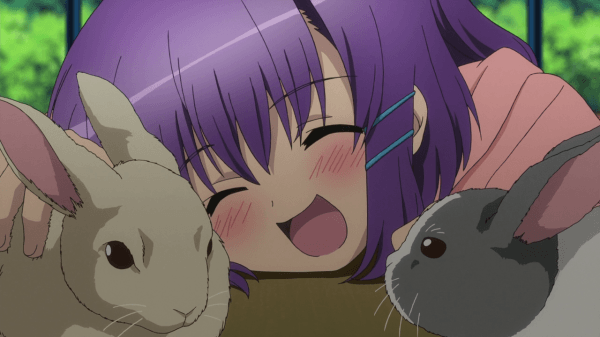 Now despite the amount of fanservice that a series like MM! may seem to offer, it is actually fairly tame on the surface. There are some revealing outfits worn and plenty of cosplay outfits with short skirts but there is actually only one panty shot throughout the entire main series, though the bonus features try to make up for that. Instead there are a number of lewd poses and of course a fair amount of masochism and sadism happening on screen.

Audio
Now the special part of this release is the fact that MM! now sports an English dub to go along with the original Japanese voice track. A number of popular English voice actors have taken up with the cast, with Monica Rial handling Mio, Blake Shepard as Sado, and Emily Neves taking care of Yuno. Monica does an exemplary job bringing Mio’s character into English and Blake always has some rather hilarious lines when he handles Sado’s masochism. There are a few issues with the dub however as they chose to almost always have Sado call Mio ‘Senpai’ in English which sounds awkward most of the time and there are some issues with the mouth flaps not matching the new dubwork. 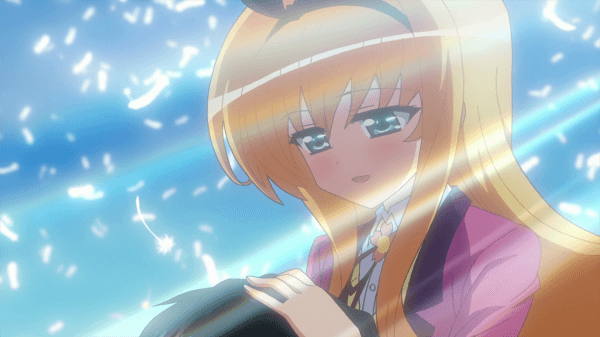 The basic soundtrack for MM! is rather bland and forgettable, but there are a few inserted songs that are enjoyable. This is made up for by the fact that both the opening and ending themes are incredibly catchy and highly energetic. The opening theme consists of two variations of the same song “Help!!” with a hell side and a heaven side sung by the Japanese voice actresses for Mio and Yuno. The lyrics are very similar to one another but the accompanying animation is altered while the ending theme “More-More Lovers!” by Natsuko Asou is always worth watching.

Extras
For this release of MM! Sentai Filmworks has provided viewers with a number of extra on-disc features. There is a Japanese commentary featuring the voice actresses for Mio and Yuno with English subtitles for the first episode of the series, numerous Japanese promotional videos, trailers for other shows from Sentai Filmworks, a clean version of all three opening animations, a clean ending animation, and disc credits. 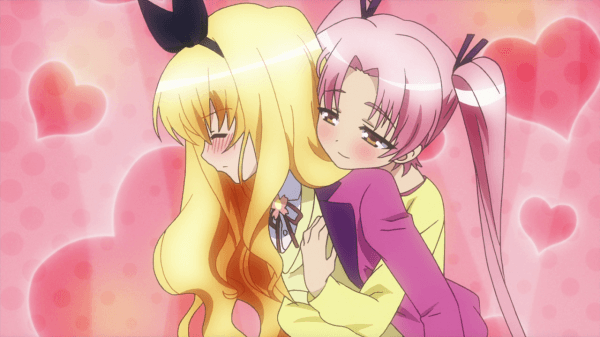 Accompanying these extras are two sets of Japanese dub only shorts that, as mentioned earlier, provide a lot of the fanservice that the show itself did not. There is the “A Rather Extreme Short Story” set with five shorts running about two minutes long a piece that feature various members of the female cast interacting with one another with plenty of panty shots and lewd poses. The other collection is the “Hidden Camera Shorts” which are four sets, three of which focus on hidden cameras spying on the female cast changing clothes and showing off their underwear while the final short focuses on Mio’s fanclub spying on her.

Overall
Now that the MM!: Complete Collection has been released with an English dub it is as enjoyable as ever. For viewers who would still prefer the Japanese audio it is still included and the Blu-ray upgrade does offer a nice jump in visual quality and for those that have been waiting for an English dub the cast handles the characters impressively well with almost every joke easily transitioning into English considering it is primarily slapstick sight gags.

Although the characters are primarily developed based on their perversion, all three members of the main cast grow a bit over the course of the season, though not enough to truly resolve everything. With the potential for romance always so close but still so far away, MM! doesn’t really resolve anything in the end but it is still a great ride with hilarious enough comedy to keep the viewer in stitches.