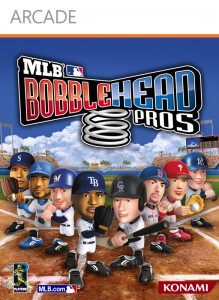 MLB Bobblehead Pros is a baseball simulation game published by Konami for the Xbox Live Arcade.  There is one big difference between this game and other baseball sims though.  MLB Bobblehead Pros has character models that are made up of, you guessed it, Bobbleheads.  Every  batter, pitcher, 3rd base coach etc is a bobblehead.  In other words, your favorite pro baseball player, in my case it is Todd Helton, is actually a bobblehead, thereby replicating the experience of bobblehead night at your baseball park (where bobbleheads of a particular player are passed out to the first 1,000 or so fans.)  In this game, you no longer have to show up early to get your grubby hands on a bobblehead though.  Plus, you actually get to be a part of the game, and you can see every player ever in bobblehead form, which is virtually impossible in real life.

Of course, besides collectors (and Dwight Schrute), who really feels that bobbleheads are more than a novelty?  Who really, truly cherishes the bobbleheads they have received?  More than likely, that bobblehead, like the one I got one time when I was lucky enough to show up early to a game, is sitting somewhere unknown (be it a landfill, storage area or shelf) right now.And that is one of the larger problems problems with this game.  The whole bobblehead idea is just a big, fat gimmick.  The game is marketed by the premise that the bobbleheads will be involved in some spectaular fashion, but in reality, the bobbleheads are just the player models and that’s it.  There is no gallery to admire your bobbleheads.  As a matter of fact, there is no way to even collect bobbleheads.  All of them are just given to you at once.  Either bobbleheads are so important to the baseball experience that they are worth creating a game around them, or, they are so worthless (like the one I can’t find.  Where is IT?!) that they can’t even be respected a little more in a game that is based around them.  Either way, bobbleheads are not the reason to get this game, despite the few laughs you’ll get seeing your personal favorite pro bobbing his head and having no legs. 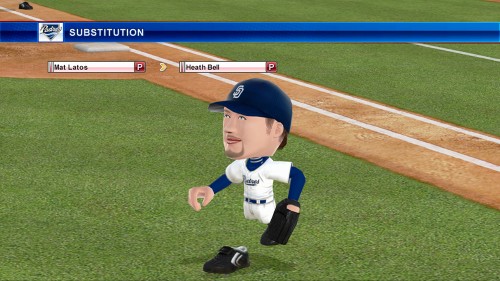 All in all, it all comes down to gameplay. MLB Bobblehead Pros is an undeniable star in this department, although this star has some issues shining sometimes.  MLB Bobblehead Pros, despite its cutesy exterior, is in reality, a very full featured sim.  Plenty of stats, a full 162 game season mode and the ability to create your own teams showcase how serious this game is about adhereing to the true nature of the game.  Once you get onto the field, matters do not change. Pitching and batting all strive to give a true to life experience, although it should be noted that pitching is super difficult and batting takes some serious practice.    In both cases, you’ll have to line up the indicator properly (its harder than it sounds) and work on your timing to the second.  There is no tutorial either, making it all the more taxing to accomplish the tasks of pitching and batting. It is very rewarding when you finally succeed in these matters though.Fielding, rather than being difficult, is nigh impossible.  The bobbling players literally bobble the ball all the time.  And the lack of legs must really slow them down too because unless the batter hits a super high pop up, it is literally impossible to get them under the ball.  On top of that, the controls for jumping and sliding are the same as those used to throw to the various plates.  So if slightly mistimed, your spectacular double play will fail miserably on account of your diving into the dust instead of throwing to first. 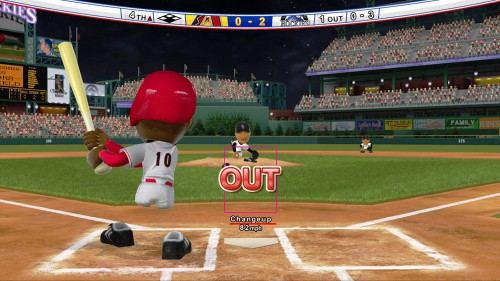 Once you have mastered the arts of pitching, batting and fielding, there are plenty of modes to get your play on.  Online and offline coop, season modes, exhibition and online competitive modes are all there to extend the life of the game.  There is DLC as well, coming soon.One feature that is really different in this game than in other baseball sims is the lack of a soundtrack.  On top of that, commentary is thin at best.  At the end of an inning, a voiceover will make jokes about bobbleheads, but other than that, there is no play by play or anything similar.  I personally hate the commentary in most games, but for hardcore enthusiasts, this will undoubtedly make the experience less fun. 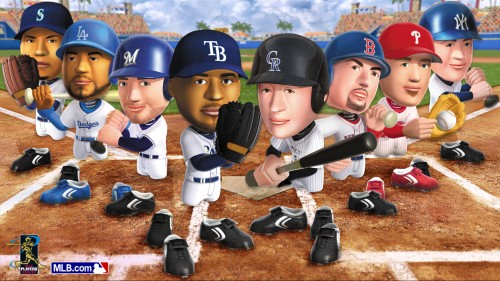 The graphics in the game also fall a little short.  There are plenty of stadiums and each is very well replicated.  The bobbleheads are also finely detailed and you can distinguish who each character is.  However, there are a lot of jagged edges and it just seems to lack that pop and polish that many HD games have.In conclusion, MLB Bobblehead Pros is a hardcore baseball sim.  There are plenty of faults, but in reality, it is one of the better baseball games for the Xbox 360, especially for those who want a challenging, realistic baseball game. It truly has all the features that many of its $60 competitors have. And for a mere $10, there is hardly any fault too big not to recommend this game to someone looking for well stocked baseball video game.