If there’s one good thing to be said about Steam Greenlight, it’s that it only reinforced my gaming mantra of “no expectations – no disappointments”. Many moons ago, I’d find myself having pretentious opinions about a game based on cover art or a title alone. All I can say these days is “well whatever it is, it can’t be that bad, I’m sure I played far worse before”. So thanks, Greenlight!

Somehow that weird opening is supposed to tie into my Mini Ghost review. But it does, seeing how I’m giving a bit of a backstory why it’s silly to be harsh on games such as these. Games who follow a simple principle of what you see is what you get. In this case, we have a great little time killer that keeps you entertained for more than you can imagine. Eventually, you find yourself not playing it for the sole purpose of beating it, but because it’s actually….dare I say it, f-fun? 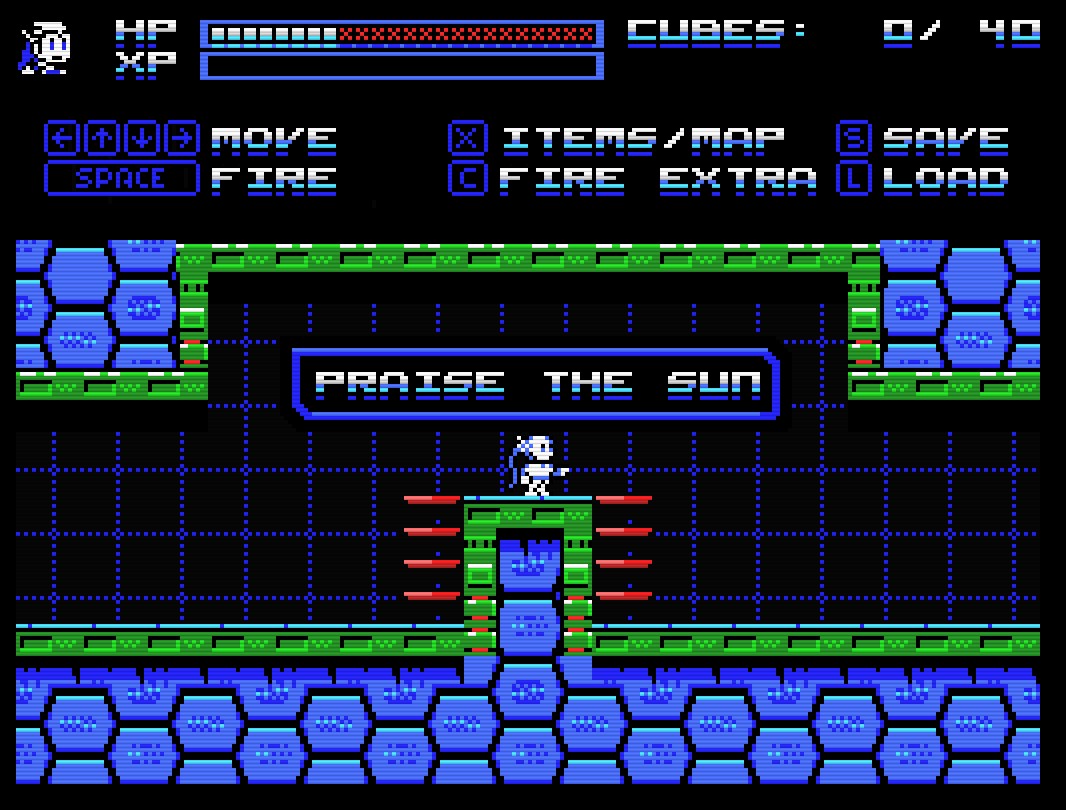 The game gives you a short story in a form of a comic slideshow. Your boss Viktor wants to make some money so his first rational thought is to orchestrate a cyber attack on a Dallas space station (we are so far into the future that even the state of Texas has a space program). Next thing we know, the chief of the space station calls Viktor to complain. All is well though since Viktor has a best man for the job. I’m talking about none other than you – the player!  The job in question is simply to find the main computer and destroy it. Really amazing how I managed to squeeze out so much story out of 10 sliding images. But let’s dive into the actual game now. 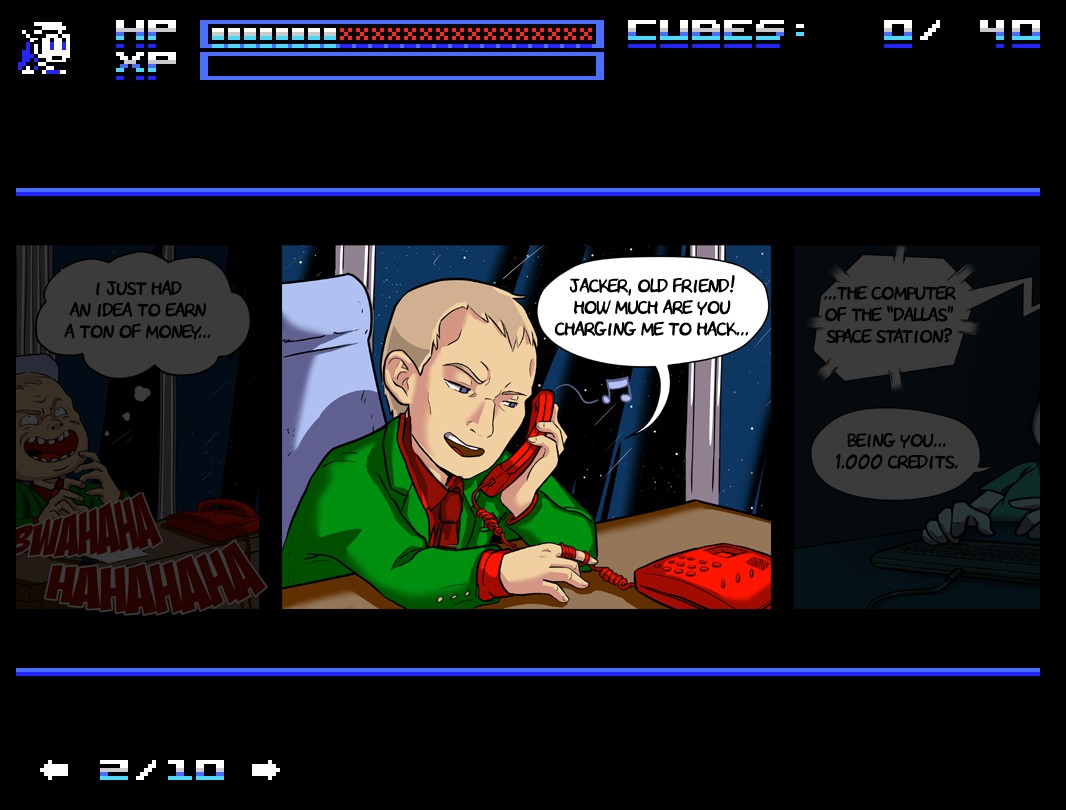 Ok, so what do we have here?  The initial screen you’re thrown at shows you a simple tutorial for keyboard controls and the first look at HP & XP bar. Experience bar is slowly filled as you kill enemies and every time you fill it another bonus HP unit is added to the health bar. Besides getting XP from enemies, another incentive for going on a murderous rampage is that they also drop cubes (aka coins) upon death. Cubes can also be found in random blue crates. It is important to wreck every single one you find since they not only hold cubes but important key items as well. By accumulating enough cubes, you can exchange them in a shop for plenty of useful items.

The game is divided into zones. Every zone has a map that you can either reveal slowly by moving from room to room or cough up some hard earned cubes for a map. I think the former approach is a better one, albeit slower. Don’t let the cutesy pixel art fool you, the game does not hold back. There’s one HP bar, one life and that’s it. You die and it’s game over all the way back to that first tutorial screen (hence the slower approach with memorizing room layouts and enemies) As you progress from zone to zone, the enemies change from cube farming resources to something of a challenge. Now you have them shooting missiles at you and moving faster. And to think I’m doing all of this so Viktor could profit in the end and not me… 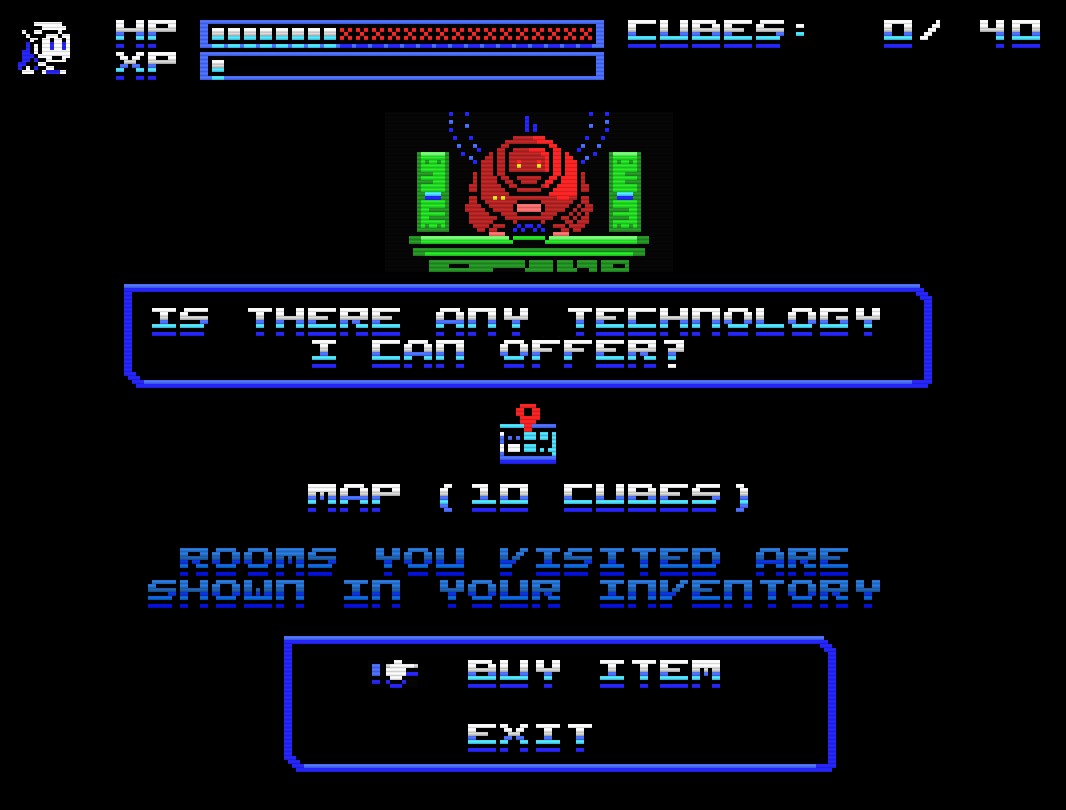 Being a simple Metroidvania game, there’s no need to expect any sort of stellar graphics. As long as you can tell what you’re looking at, things are fine. Yet after a while I got a feeling visuals could really use a tiny bit of polish. Especially our Ghost who is kind of missing some details as seen in the opening comic. Fortunately, one kind soul on Workshop uploaded a Samus Aran skin to replace our default Ghost model. That being said, it wouldn’t be fair of me to dig out any more flaws in graphics, especially how dev made quite a feat packing all of this into an impressive size of only 20 MB.

Not much to say here. There is one chiptune loop that goes on and on but it does a good job of not being annoying. Come to think of it, it actually grows on you and gets enjoyable after a while.  In most of the other Metroidvania games, I usually end up completely muting the audio before it drives me insane.  One thing I have to criticize here is that the default audio is unusually low. Obviously, your first instinct will be to turn it up quite a bit.  Just don’t make the same mistake as I did and forget about it later once you stop playing. Regardless of the next sound that comes out of your PC, it will almost definitely feel like a jump scare. 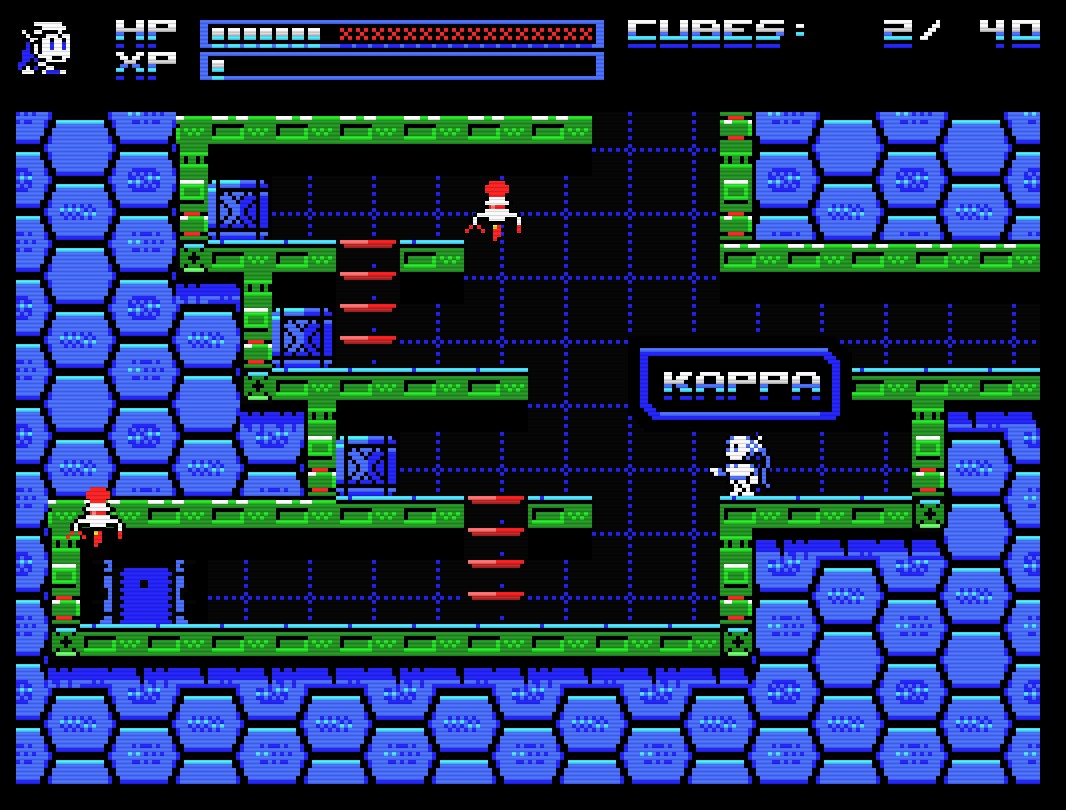 If anything, Mini Ghost is another case of “more than meets the eye”. It’s deceptive in all the good ways. You first notice a small price tag and an achievement or two implying how the game can be blazed through in less than an hour. All of that could give you an assumption of a rather short and not so challenging game. Well, you would be wrong on both of those accounts. Mini Ghost also comes bundled with a level, character and a tileset editor. So you’ve beaten the game and found everything there is? Perfect time to make your own map now, along with a new character and share it on Steam Workshop. For me, it will take a while until I reach that point seeing how I’m 4 hours in and just barely got the layout of Zone 2. All things considered, with the amount of content you get for the current price, might as well grab it now.

Mini Ghost is a classic example of not expecting much and being pleasantly surprised.
7