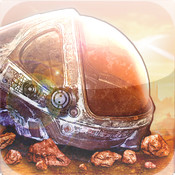 Overview
Mining is a dangerous line of work. Tunnelling deep underground, devoid of sunlight, of fresh air, of space. Definitely one of the toughest jobs on the planet…especially when that planet is Mars. As if it wasn’t already difficult, the red planet adds the extra obstacle of alien creatures. Dweeling within the very caves you wish to mine, it’s going to be one heck of a battle to make it out with your haul…and your life. 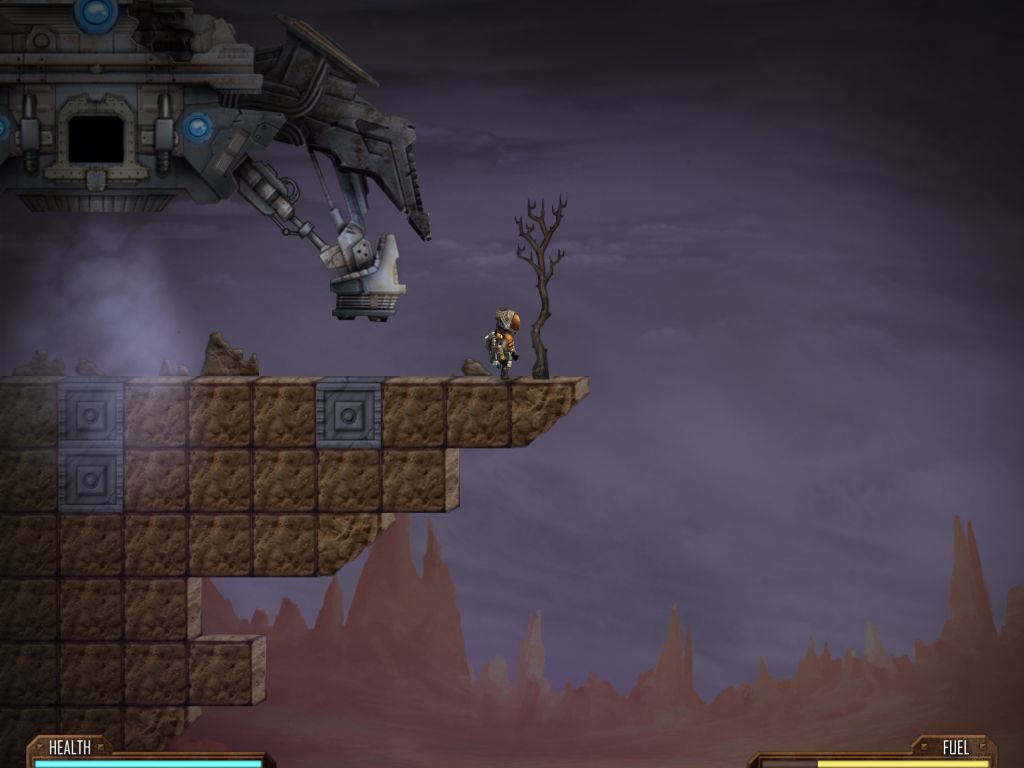 Nowhere to go but down

Story
Weclome to Mars. You have been sent here, travelling through the haunting beauty of space for a single purpose: to spend your days underground mining for gems and minerals…so not the most glamorous of missions, but hey work is work. As you carve your way through the bowels of the red planet, certain inconsistencies with the environment reveal that not only are you not alone, you may just be under attack. Not only that, but a few slip ups from your boss reveal that you may just be further away from home than you think. Like, over 100 years further…

Gameplay
Unsurprisingly, mining takes a rather central role in Mines of Mars. Viewed from a side on perspective, the environment is divided into squares organised in a randomised pattern, a feature that is really only useful should you desire to begin a new game. Though a majority of the land is nothing more than dirt, there are those few blocks that are just a little more valuable. Those are the ones you want. By mining said blocks you can obtain precious materials that can be used to upgrade the abilities of the intrepid Miner. Without said improvements, your aptitude as a miner will be greatly reduced. For example, failing to upgrade your heat sink will force you to remain at lesser depths, above the more valuable materials.

Upgrades themselves are divided into a few different categories: there’s weapon’s, utilities, armour and tools. Definitely one of the most helpful features of this system is the ability to improve your pickaxe, increasing the speed with which you mine. Which is especially useful as your mines snake deeper and deeper downwards, expanding well beyond the bounds of common sense. Special caution must be taken when mining downwards however, due to the limits of your equipped jetpack. Should you run out of fuel before returning to the portal through which you entered the mine, a type of game over will occur, resulting in the loss of all mineral acquired in your most recent jaunt through the underground. Though apart from that the only real repercussion is having the weird chief insult you, not a big deal. This obstacle may be overcome in a few different ways, the most simple of which is to upgrade the jetpack. Other options include, purchasing portals to set your spawn point deeper underground, focus on the limits of your current flight prowess or simple mine intelligently. But where’s the fun in that? 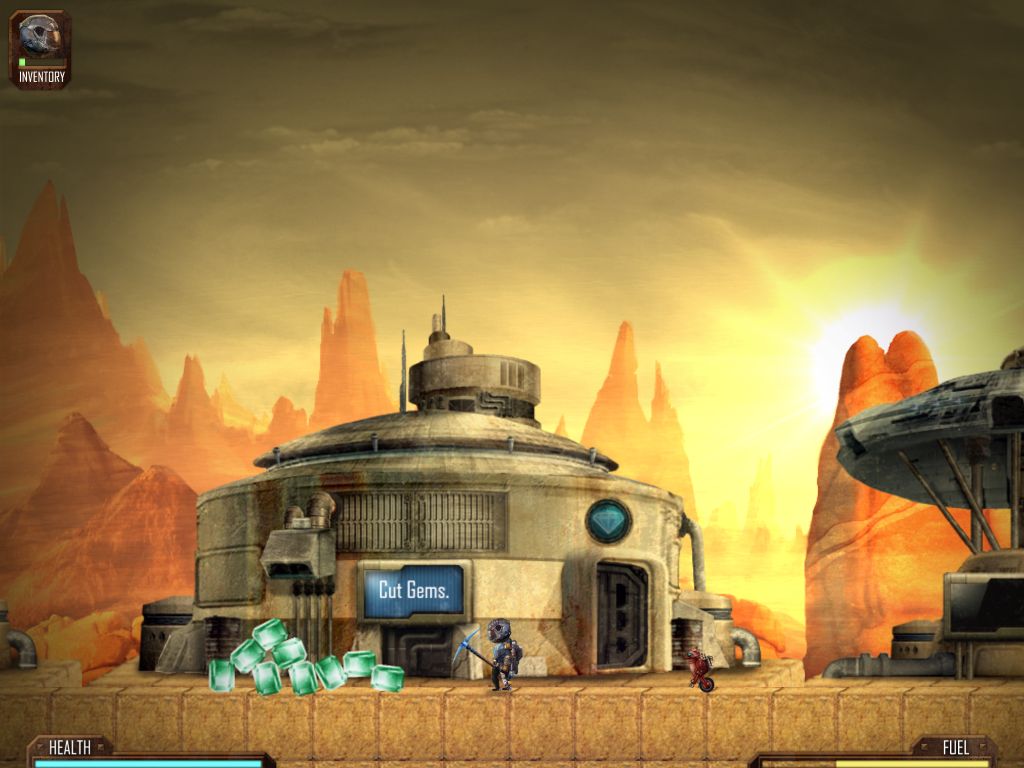 The perks of being a miner

Most upgrades do however require a tremendous amount of effort to obtain. As minerals and gems are indeed scarce, it can take hours to acquire even the simplest of materials. It’s a luck game really. That being said, each one is definitely worth it, even the ones that don’t outwardly appear to be. The boots for example. The description notes that these shoes will increase both jumping height and running speed, two abilities not inherently useful in the confined spaces of a mine. However, purchasing these will grant access to a second pair of boots with an invaluable skill: gravity manipulation. This allows you to stand on the ceiling and mine upwards. Which, in addition to being awesome, lets you acquire minerals previously missed on the path down. On the topic of clothing, it would also be a good idea to invest in some of the defensive sort, just in case you run into any monsters.

Ah yes, it wouldn’t truly be another planet if the wildlife was not bizarre and out to get you. Though not inherently strong, the more common enemies can become a problem due to the confined spaces of the underground environment. However, they are not the true threat. Should you stumble upon archaic ruins within the bowels of Mars, you may just encounter the true guard dogs of the Martian race. Without proper upgrades, these fights will become exponentially more difficult, resulting in a quick warp to the surface and the loss of on hand materials. Damn. 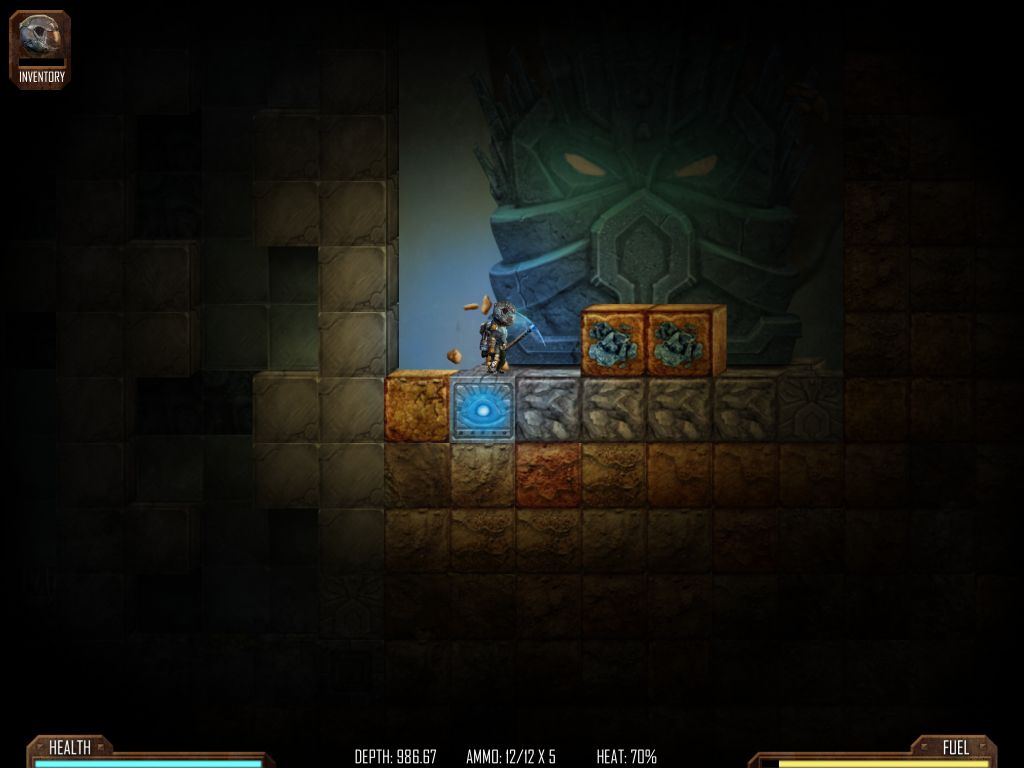 Visuals
Mines of Mars definitely has a industrial feel to it’s visual style. On the surface, buildings constructed of various metals stand against the red desert that sprawls behind them. There’s no aesthetic beauty to these structures, presented as forms of necessity above all else. Whenever a service is rendered, these buildings will also hiss steam from various vents, showcasing that they are not the most refined creations. On the other hand, the relics that lie beneath the surface possess an ancient visual style, most often expressed via archaic symbols and monuments. This serves to break up the monotony of dirt and add a sense of excitement to the occasionally tedious task of mining.

To further drive the point that you are no longer on Earth, the bright blue marble hangs in the sky. This is especially noticeable when the game transitions from day to night, as it replaces the moon as the sphere you look up to in the blanket of darkness.

Audio
The games introductory cutscene contains a brief narration by the protagonist, lamenting his new assignment. Whilst a good way to begin the game, the Miner’s voice was just a smidge on the side of dull. It was clear that the game was going for the guise of a hardened, morose worker who longs for a better life, but they instead crossed over a line of monotone and into lethargy. That being said, the vocalisation was a nice touch and served to add some sense of personality and past to the protagonist.

Whilst deep within the mantle of Mars, the soundtrack adopts a classic sci-fi feel. Echoing synth notes express both the emptiness of the caverns in which you dig, as well as the fact you are not on Earth. Which is cool. In addition, the echo provides a sense of emptiness, telling of the Miner’s lonely quest through the depths of Mars. 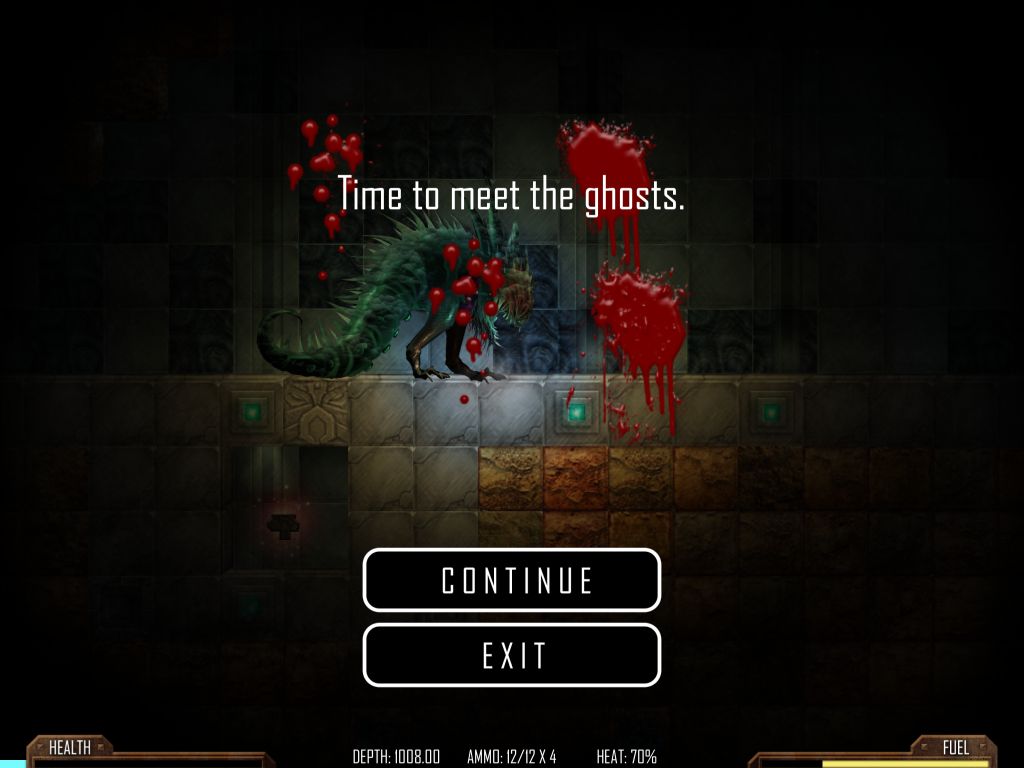 Overall
Mines of Mars is simple in concept and enjoyable in execution. Though mining is by no means a revolutionary concept in the world of gaming, it doesn’t mean that it can’t be interesting. The game does a great job in balancing the environment, making it feel like an achievement whenever you stumble upon a material buried amidst the dirt. That being said, the upgrades do cost a bundle in comparison, requiring you to search a great deal for specific minerals or gems. Combined with the storage space available to you, this results in countless trips to the surface. Of course this means that the further you go down, the furhter you have to go back up. Which can become slightly annoying, especially when your inventory fills up right before you finish depleting a rich vein of ore. Though those are the truths of mining I guess. All in all,  Mines of Mars is a fun game that will keep your attention long enough for you to care about creating a powerful Miner and single handedly discover the mysteries that lie below the surface of the red planet. Though a little back-up would be nice every once in a while…