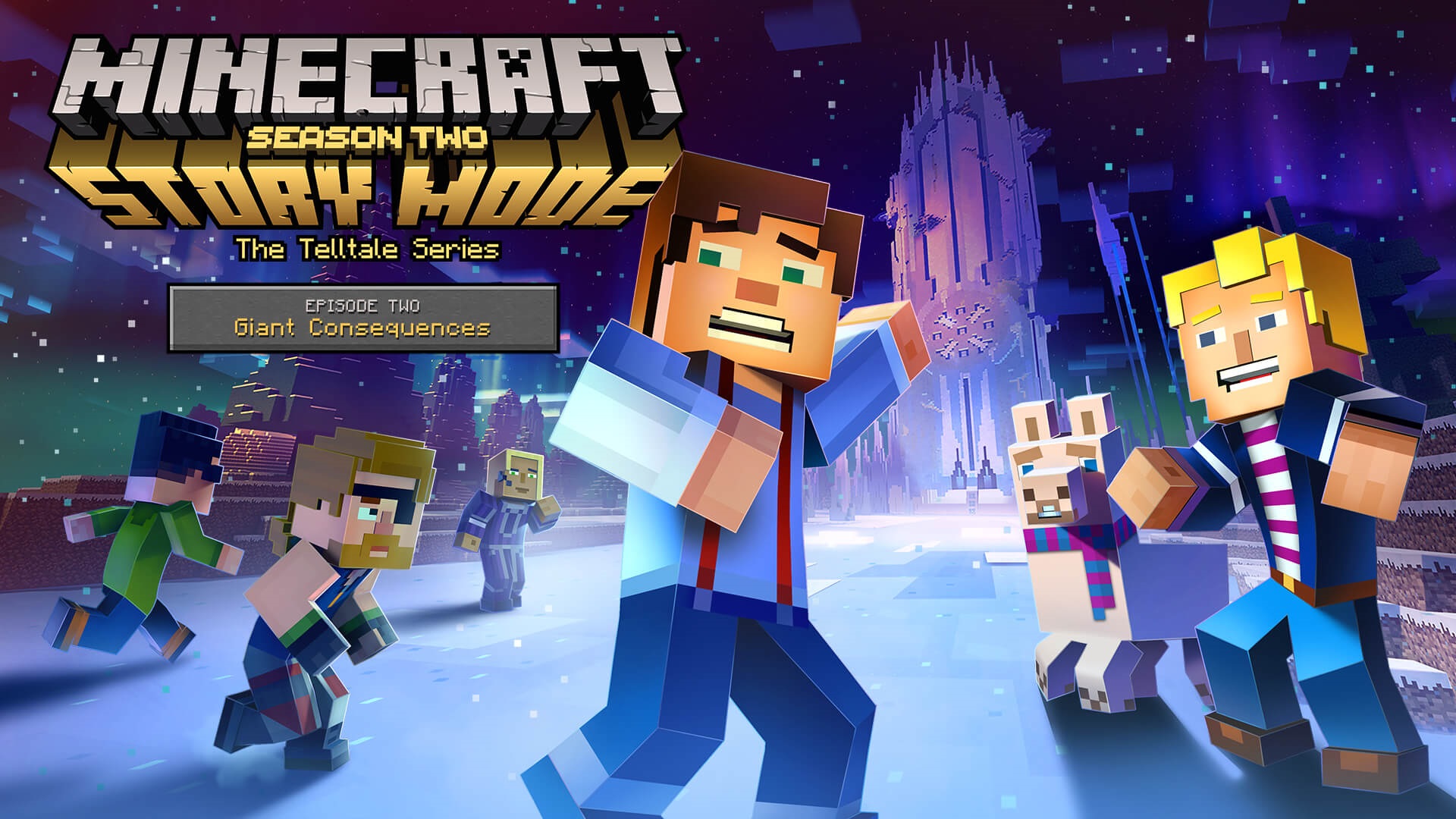 After a little under a year of downtime Telltale Games managed to kick off Minecraft: Story Mode Season 2 quite successfully by giving older characters just enough focus to show fans where they ended up while introducing a number of new characters at the same time. Following a strong lead-in and an interesting take on the Minecraft world, will Minecraft: Story Mode Season 2 – Giant Consequences manage to hold up?

After managing to complete a difficult adventure into a Sea Temple and seal a monster spawning portal one would hope to relax for the rest of the day but unfortunately for Jesse and his new group that is the exact opposite of what happened at the end of the first episode. Instead the colossal prismarine golem claiming to be the Admin had followed them back to Beacon Town and this threat is capable of far more than simply wielding its gigantic fists.

Picking up immediately after where the first episode leaves off we witness that the Admin has indescribable power at its disposal. Capable of plunging the entire world into eternal night, the Admin challenges Jesse once more to a series of trials that will prove that he has what “it” takes and with the defenses of Beacon Town destroyed, Jesse has no choice but to accept this challenge, bringing with him most of his compatriots from the Sea Temple adventure, a returning friend, and even a couple of unlikely faces that seem far less capable than the rest of the group.

It is interesting to see how quickly Telltale Games is attempting to move the story along in Minecraft: Story Mode Season 2. Events that previously may have been seen as threats that could last multiple episodes are completed in a single chapter only to find our group sent forward on another task that puts the fate of those they care for in the balance. This makes for some exciting action sequences and plenty of new environments to explore but it does end up leaving us with a storyline that doesn’t really reveal much at the moment.

Sure there are still twists here and there but thanks to the abrupt nature of some developments and the completely straightforward way that the plot is progressing down, even with an established and insanely powerful entity serving as the main villain, there is a lack of impact to the story that unfolds in this second episode. This may partly be due to the fact that there is little character development for any of your returning allies and even the new team members are given barely any time to shine outside of some obvious developments for two specific characters.

As such, with a cliffhanger once again leaving Jesse and his friends’ fates unknown Telltale really has to try and tighten the reigns a bit more going forward so that this adventure feels like it has more weight and meaning to it rather than just a series of rushed events being strung together.

For the most part players will still experience plenty of the standard gameplay elements that Telltale is known for such as making dialogue choices within a time limit, taking part in quick time events to avoid death, and fighting here and there but it is worth noting that the exploration elements do take a back seat this episode. That being said the various puzzles that players can end up completing are a bit more detailed this time around and the building section, where players can design an object of their choosing, also makes a return.

It is also interesting to note that there is a choice in this episode that temporarily separates the party into two groups and depending on which group Jesse follows, a different challenge will be awaiting them. This makes it so at least during this section players will have a unique feeling experience even if the story remains the same past this point.

One thing that can be praised about how quickly players are ushered from one event to another is the unique environments that they will be exploring. This time around an icy palace filled with challenges of various kinds awaits the group and it looks extremely impressive both inside and out. Plus, thanks to the unique abilities of the Admin there are even a number of unique looking enemies that players will encounter throughout their time in the palace.

As for the voice work, the cast continues to fit their roles quite nicely, especially in the case of Radar who plays a larger role this time around. The soundtrack for the episode is fairly standard and enjoyable though don’t expect anything too memorable.

Perhaps as a way to show just how powerful their foe is or simply due to oddly paced storytelling, Minecraft: Story Mode Season 2 ends up feeling like it is already putting the season into cruise control. While large scale combat and various twists are revealed, the resulting outcome changes almost nothing from when the episode begins, leaving Jesse once more at the mercy of the Admin’s plans. Whether it is the former or the latter will end up being revealed further down the line but hopefully along the way more meaning is given to the plight of Jesse and the gang to give players a reason to be concerned.

Despite plenty of action, a lack of meaningful character development and oddly paced storytelling hold Giant Consequences , which is at the forefront an exciting seeming episode, back due to a complete lack of consequence and progression.
6.5