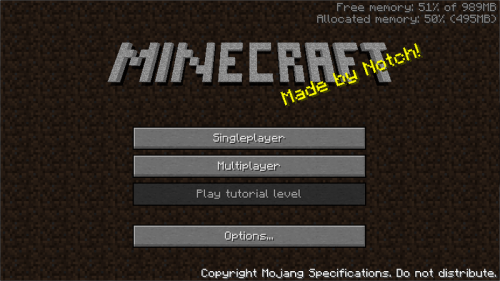 Minecraft: All the fun of Meth, without the tooth decay!

A couple weeks back, I was browsing about the internet, trying to find something that would hold my interest for longer than 30 seconds, when I came across a fan-made trailer for a game called Minecraft.

Now, I had heard a lot about this so-called “Minecraft,” nothing about the actual game, but I had heard it mentioned, and this video piqued my interest. It appeared to be a game where you mine resources, then craft them. To what end, I had yet to discover, but of course there must be some sort of end goal. I mean, what kind of game has no goal or structure, right?

So after a few days of holding out and doing a bit of digging on the interwebz, I thought, “Meh. It seems interesting, but I don’t really want to pay money to play the full version.”

This is when two very important things happened.

One, I saw this video, in which a man with perhaps the penultimate nerd voice explains how he is building a working computer, inside of Minecraft.

This video is astounding to me.  Not only for the fact that it is at all possible to make a computer inside of a little PC game, but because in the short time it took to watch that video, a gained a better understanding of how computers work at a basic level than I ever did simply trying to read (to anyone who denies that games can be learning tools, HA!).

The second thing that happened was perhaps even more important than that awe-inspiring video. The weekend after viewing that video, the Minecraft servers went down, and Notch (the creator of the game) declared that weekend to be a free-play weekend.

The stars aligned, and I downloaded the fuck outa that game.

I started it up, and saw that everything, from sheep to trees, from dirt to the sun itself, was made of large blocks; if I smack the blocks enough, they break and enter my inventory, where I can equip and place the blocks as I see fit. This, as you may well have guessed, is where the “mine” portion of the title comes from.

The “craft” portion was a bit stickier. I had heard that I was able to craft loads of objects; picks, doors, armor, ladders, fences, whatever. What I had not heard was how to do so.

You see, unlike crafting systems in other games, you do not simply take two objects and magically transmogrify them into a single, totally different object. This game makes you LOGIC shit through, something I greatly respect. So instead of selecting a cat and a fish and hitting the “combine” button to get a catfish, you actually have to place materials in a certain way within the 2×2 crafting box to get a certain item out of it. But the game doesn’t exactly tell you up front what you can craft, or what shapes you need to make to craft it. I figured you can’t go wrong with wood (ba-dum-tish), so I began collecting some by smacking the nearby trees. Which proceeded to defy gravity. 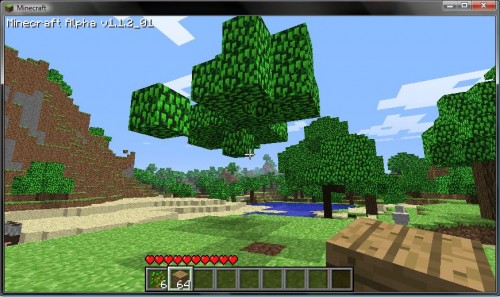 I entered my inventory, and, lacking anything better to do, put the wood in the crafting box (giggity).

And that is how I discovered how to make wood planks… ALL BY MYSELF!

But the limits of my ingenuity had been reached, and a jaunt to the Minecraft Wiki was required. I clicked around for a bit, and voila! I learned to make a pick.

So I made a low-quality pick out of wood, and began mining my way into the side of the nearby mountain. The deeper I went, the more iron, gold, and diamond I found. But I also found myself burning up in underground pools of lava, falling through the ground to be dashed to death on the floors of massive caves, and being attacked by zombies, skeletons, spiders, and suicide-bombing “creepers.” If I wanted to continue lower, I needed a way to stay alive

The combat in the game isn’t exactly complex (it consists of holding down the smack button until your enemy says “blargh”  and falls down), and I honestly think the game would be better off without it. It draws attention to a core problem with this game: the fact that after all is said and done, there’s really no point to playing.

There’s no experience system, so no reason to fight the baddies other than to survive. But wait, why are you down where the enemies are anyway? You’re only there to get the better materials, after all. And why are you getting better materials, except to get better items, like swords and armor? Which you only need for killing zombies? When you think about it, you never really accomplish anything, and there is no goal or reason to try and improve. Unless you can find some way to motivate yourself to play, the novelty wears off pretty quick, and you quickly stop playing. So what can you do to keep yourself interested, motivated, and occupied?

There lies the genius of this game. It is the ultimate sandbox. You can change the scenery as much as you want, able to both create and destroy nearly anything you come across. You want a giant castle on top of a mountain? You can build it. Underground temple to Cthulhu surrounded by lava waterfalls? You can build it. With the introduction of redstone powder, you can even create electrical circuits, switches, and traps. So as long as you can keep yourself interested in building, the game can last forever.

But a problem occurs when so much of the game is about creation: You can never be truly finished. Sure, you finally constructed a tunnel from your home base to you mining camp, but it takes a while to get from one side to the other. Maybe adding a minecart track would speed things up! And while you were making that, you discovered another vein of iron leading off from the main shaft, and had to dig that up, which led you to a patch of redstone. Well, now that you have that, you can create switches so you can have your minecart track change directions. So you add another branch to your track, leading you to a new area, etc. etc. You get locked in a continuous cycle of improvement, and you just… can’t… stop. 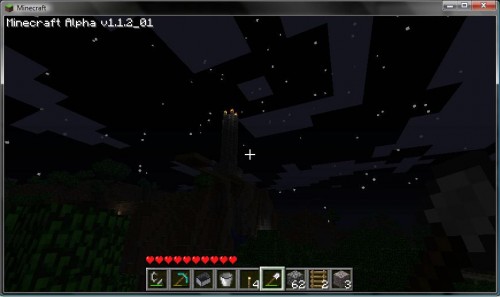 This tower started as a 4x4 wooden hut.

This incessant need to improve can manifest itself in several ways, but mostly appears as procrastination. I only signed into Minecraft again to get some pictures for this article, and ended up taking 2 more days to write this than I should have. Oops.

The game is still in its Alpha stage, so there is still a lot of work to be done. The game gets updates every couple of weeks, so there’s often new content to try out, and there is a thriving community based around the multiplayer servers that the game supports.