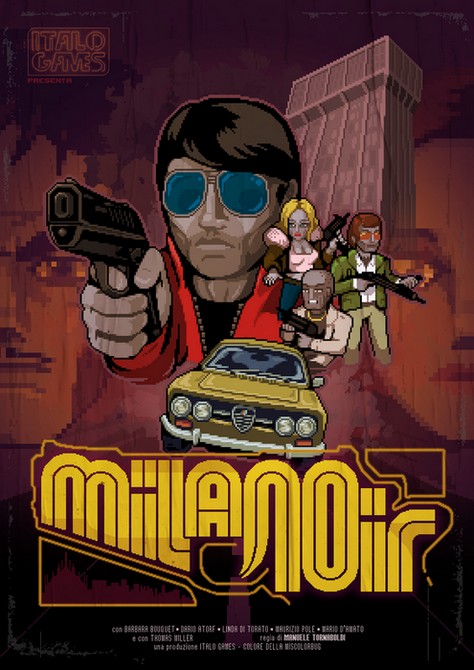 A good portion of my childhood was spent before the internet was a thing (yes, I’m that old!).  That way, most of my indoor past time as a kid went on watching cartoons and most importantly – a whole bunch of Italian Bud Spencer & Terence Hill movies. They still have a cult status in these parts of Balkan with their mix of action, comedy and spectacular fist fights. Now, why am I writing this and what does any of this have with my Milanoir review? Well, Bud Spencer & Terence Hill movies were the first thing I remember when I read the description of the game. “Inspired by the Italian crime flicks of the ’70s,  Milanoir is a pixel-packed action game set in the violent city of Milan”. So I went in expecting a nice cocktail of shootouts, fist fights and plenty of criminal activities. Let’s see what I actually found in the world of Milanoir.

You play as Piero, a slick-haired mobster devoted to his crime syndicate. You spend some time doing the usual tasks that your job requires (murders, extortion, robberies…you know, classic stuff). Eventually, there is that one job where everything that could go wrong goes wrong. While taking down the rival mob boss you end up killing some innocents by mistake and someone even snitches you to the cops as a bonus. Hello, jail time! And this is where our game truly begins. After getting out of the prison, it’s time to wrap up some unfinished business and find the person who snitched on you. Also, murder them but that goes without saying. 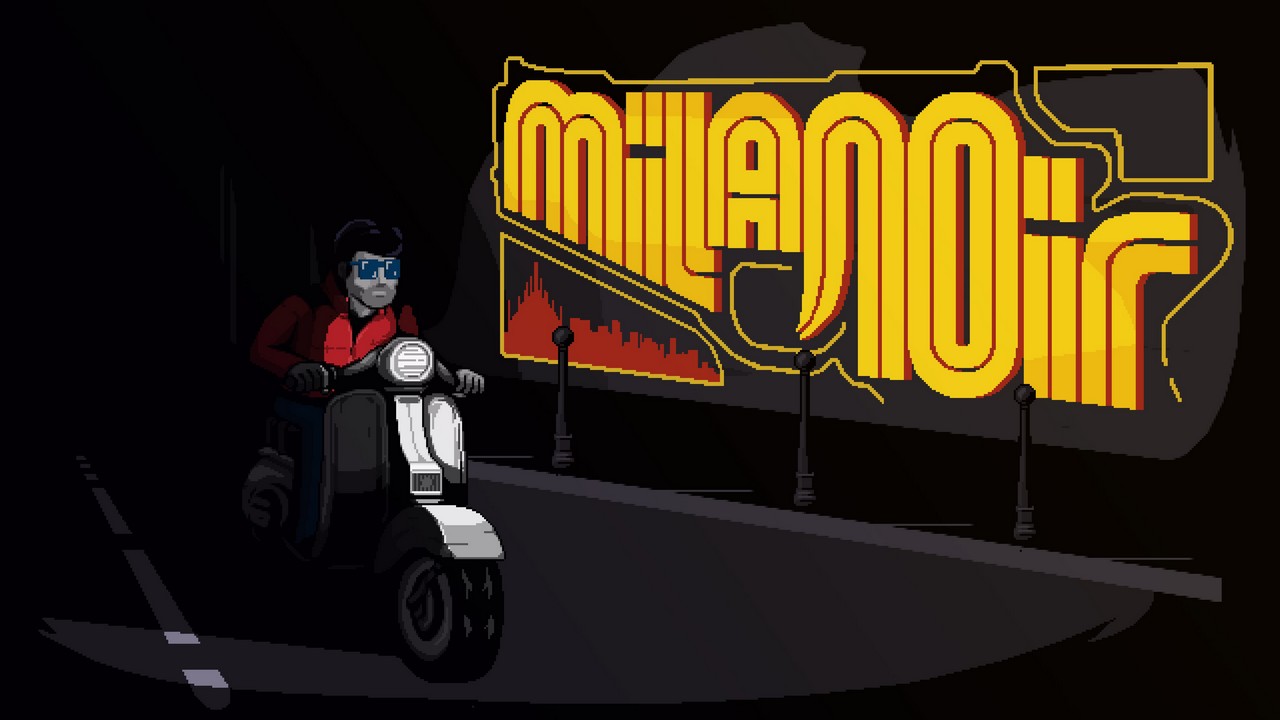 Now we are on our way to exact revenge and some fine revenge that is. What is it that makes Milanoir so fun to play? A couple of things, notably plenty of cool shootouts and engaging “just one more try” gameplay. Most of the seven chapters of the game will ask you to kill a certain rival mob boss. Getting to them is not easy since there is always a small army of goons between the two of you. They vary in appearance and in the ways of dispatching you. You have your average pistol shooting goons, shotgun baddies, Molotov bombers and even some knife-wielding moms. Your standard weapon is a pistol and it usually takes 3-4 shots to kill an enemy. Moving, rolling and shooting at the same time is a smart way to go since you will almost always have to exchange bullets with more than 3 enemies at the same time. Later on, it gets a little easier by finding occasional Molotov and a revolver throughout a level. And my most favorite thing – traffic signs. Hm, that sounds a bit anticlimactic but let me explain. By shooting at a traffic sign while the enemy is near it, the bullet will ricochet off it to the enemy resulting in a smooth one hit kill. Pretty often you might get swarmed with enemies, make a wrong move during a boss shootout and it’s game over for you (resulting in a reload to the most recent checkpoint). Be warned, this is a game where you will die and try not to die a lot, just like in Hotline Miami. Sometimes you might be close to clear the room or take down the boss but there is one last bullet that might foil your plans. Just remember, practice makes perfect! 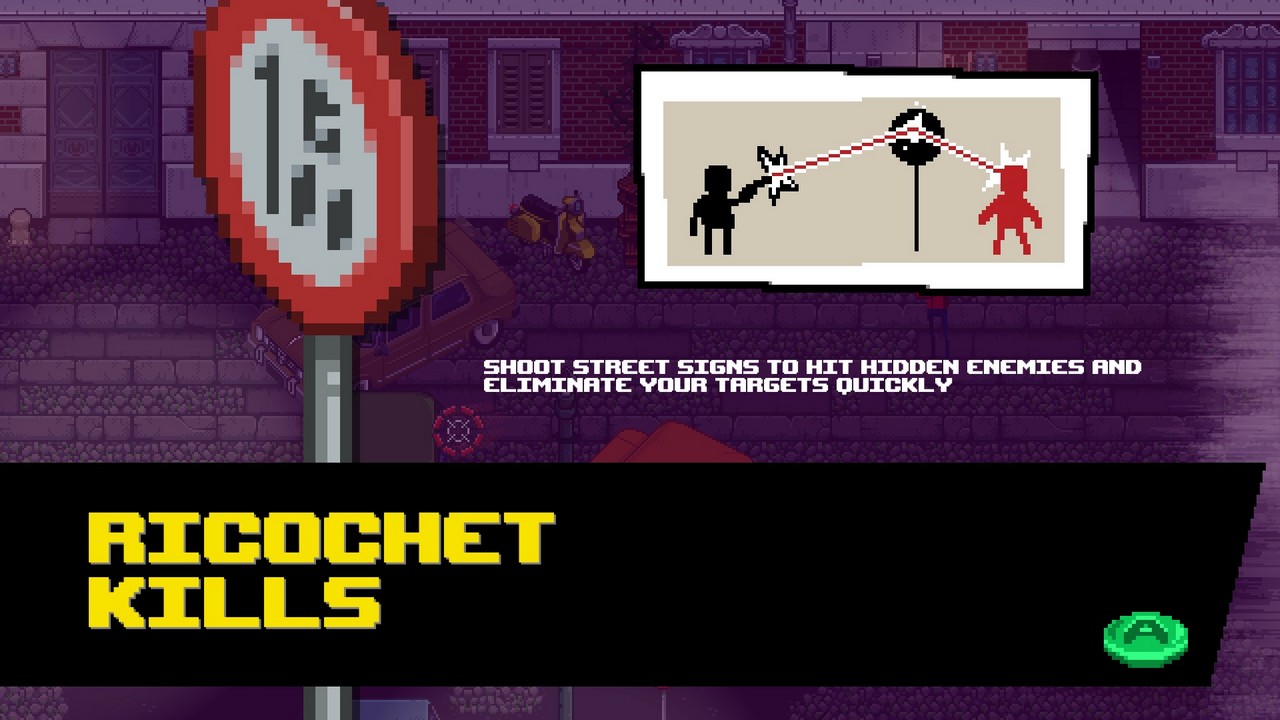 Partnering with some great gameplay, the visual aspect is also on the same level. I get to read those standard press releases or game store pages saying how their game has the best pixel graphic style that is super detailed, visually rich or whatever the new buzzword is. And I just end up looking at some average indie pixel product. Thankfully, that’s not the case with Milanoir. It makes dying so often not so bad since I get to take a second look at some really detailed scenery. Everything is so visually rich (let’s make this a new PR buzzword) from boss shootouts and car chases that I feel bad I got to spend so little time in certain levels. 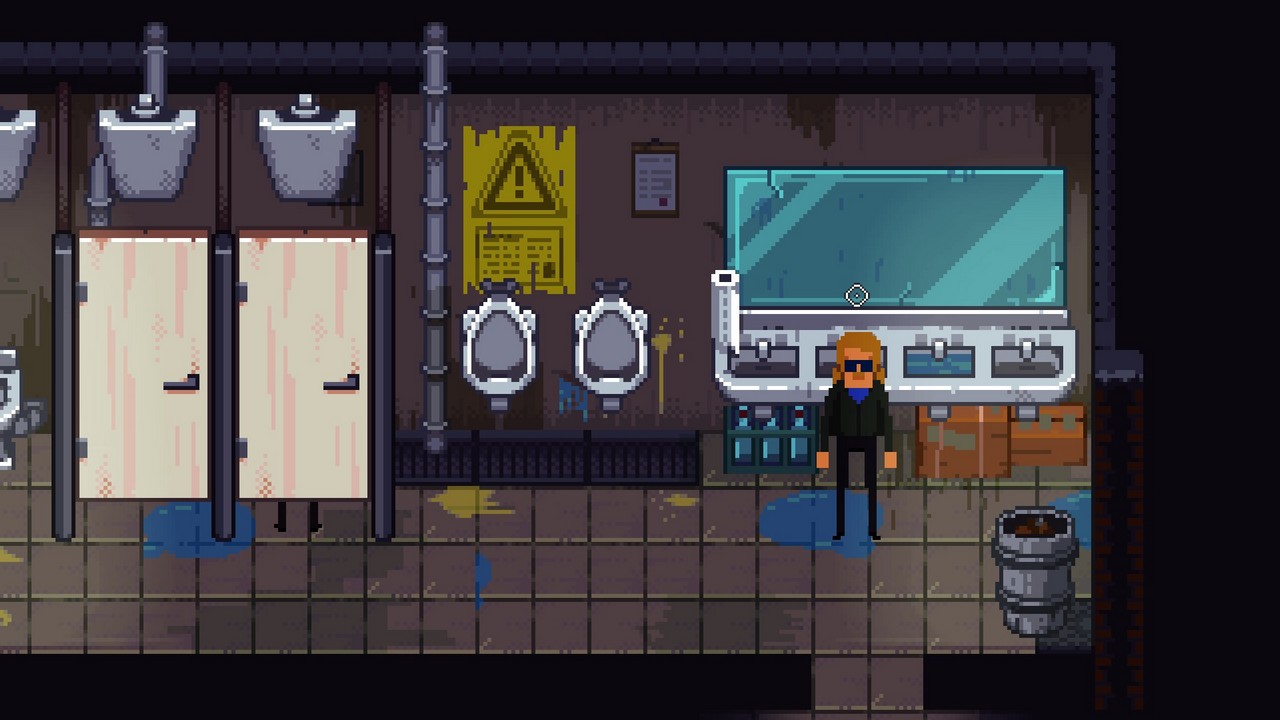 One portion of the Milanoir‘s store page description on Steam says tells me to “immerse myself in a groovy ’70s atmosphere!” While that is true and the game has some really groovy tracks there are some rather disappointing sections regarding the soundtrack. Certain parts of levels will have some undefined menacing instrumentals that took me out of the atmosphere. I expected some smooth noir jazz at least during the less intense parts of the game. Good news is that during those action-packed parts, the soundtrack is spot on and does a great job of complimenting the pixelated carnage. 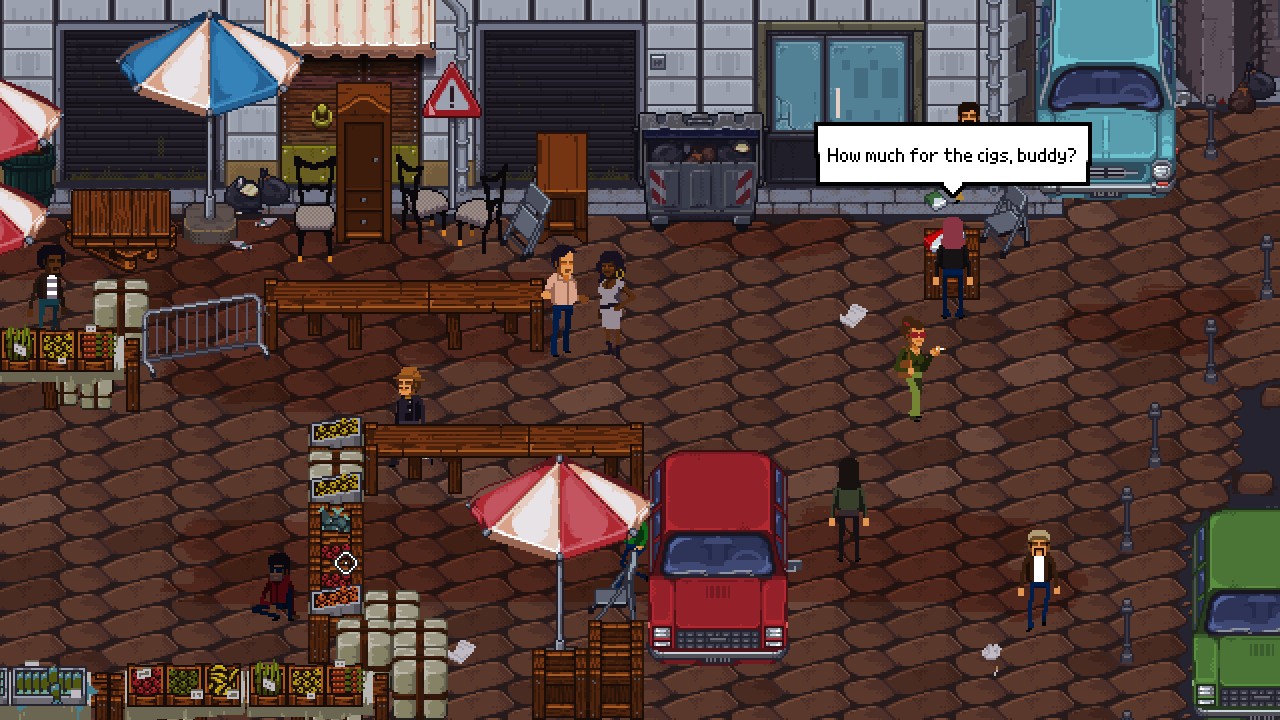 It’s really hard to find any major flaw in Milanoir. There are a couple of tiny things preventing this great game ascending to a damn good game but it’s nothing serious enough to bring down the overall atmosphere. Milanoir is a well-rounded game perfect to scratch that Hotline Miami itch but most importantly, strong enough to stand on its own.
Capsule Computers review guidelines can be found here.

Challenging, fun and a good looking game that will keep you coming back for more.
9