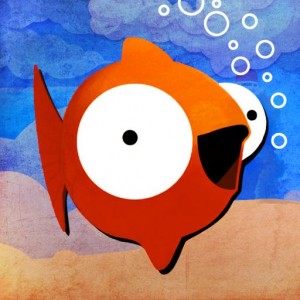 There are a lot of games released for iOS devices, and, let’s face it, a lot of them aren’t worth either your money or your time. It’s easy to lose heart in the face of such shovelware, but then games like Mighty Fin come along, pat you on the back, and tell you it’s all going to be okay.

Mighty Fin is a simple two-dimensional cartoon platformer that puts you in command of a cutesy fish, Fin, as he traverses various aquatic environments on his holidays gone wrong. You may have rolled your eyes at “two-dimensional”, “cartoon”, and “platformer”, but it’s what this game does with the tired iOS genre that really sets it above and beyond the competition. 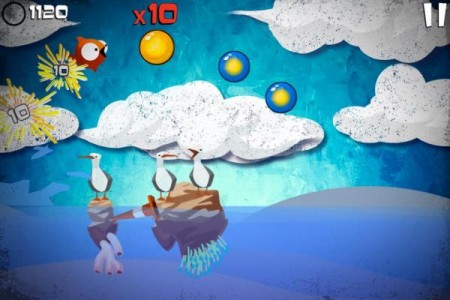 It’s a big ocean, and Fin is casually speeding forward through it regardless of the obstacles and death-traps in his way, so it’s up to the player to save him from ending up as shark food. Tapping the screen lowers Fin into a dive, releasing sends him back up; the further Fin dives, the higher he jumps when you release.

The simple controls make this game easy to get into, but challenging to master. The levels in Mighty Fin each have themes, but they’re randomly generated every time you start them, ensuring that the game is about your skill with the controls rather than level memorization. Depending on the level, you’ll have to dodge sharks, jellyfish, ninjas, or santas. Yes, it gets crazier as you go.

In a lot of cases, randomly generated levels lead to detrimental gameplay, but the game’s scoring system is based around Fin collecting bubbles along his path to the end of the level, and these bubbles act as a guide to the player, indicating where Fin should be heading next. That’s not to say, there aren’t secret areas and paths to be discovered. Each obstacle generally has multiple ways to be avoided, and choosing one over the other can lead to additional point-bubbles or even higher-scoring gold coins. The scores can, of course, be uploaded onto Games Center for use of leaderboards. 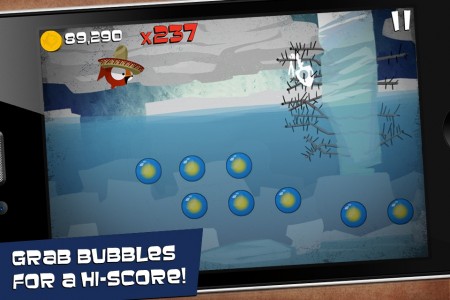 Each level also houses hidden costumes for players to find. Once unlocked, Fin can then put on different costumes, ranging from simple hats to a robot outfit. Though they don’t add to overall score, it’s surprisingly fun to get new costumes and put them on Fin, as they generally do a good job of enhancing his cutesy aesthetic.

What’s more, the game has been receiving constant updates since launch, and where the original game’s levels were grounded in either tropical, arctic, or stormy settings (with repetitive obstacles and music), the number of levels added since launch more than doubles the amount of content in game and each of the new levels is unique and different. Whether it’s the Nightmare Before Christmas ocean, or a sea entirely made up of and decorated by candy, sweets, and cakes, or a ninja-themed level, the developers at Launching Pad went crazy, and the game’s variety and gameplay are so much the better for it. 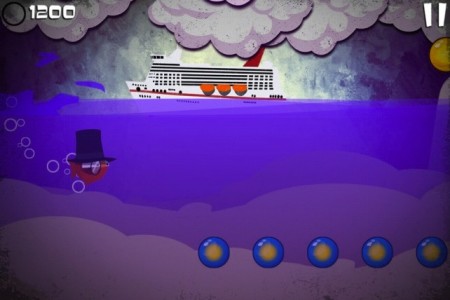 The game looks fantastic. Normally a cartoon-aesthetic on iOS is a quick two-dimensional plane with cutesy stuff thrown on to appeal to moms and kids, but the game really makes use of some great graphical techniques. Though the gameplay space is two-dimensional, there are several background planes which all move at different speeds and are drawn differently based upon their distance from the foreground. On top of that, some of the levels from the various game updates make some drastic graphical decisions that are really quite beautiful. The ninja level, in particular, was a standout. 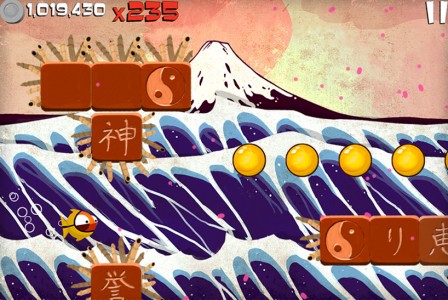 The audio tunes are cheerful and upbeat tunes, but even in the original, slightly-repetitive levels there was enough variety to keep the music from becoming the annoyance it is in lesser games. As the game goes into the additional levels, it seems as if almost each level has its own soundtrack music which was both surprising and impressive.

The sounds effects do the job. Bubbles pop as you collect them, the ocean splashes when you jump out; the basics are there, but it’s not the stand-out portion of the game.

Finally, Fin himself is a well-designed and animated character. His small body and cute bug-eyes help his appeal, and the way the character animates (half-closing his eyes while zooming through the water, or opening them wide, a big smile on his face as he jumps out of the ocean) go a long way to giving a character, who never says a word, a good deal of personality.

Many iOS games go for the cute, cartoon look, but Mighty Fin does it leaps and bounds better than most of the competition. A screenshot of the game would not look out of place among a reel of Saturday morning cartoons, and it probably even looks better than some of them. 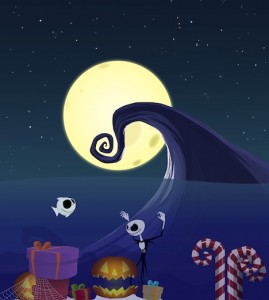 Mighty Fin succeeds spectacularly in being a game that can be played by someone who has never touched a video-game before, but mastered by those who have a history with platformers. The simple touch-mechanic and easy-to-understand gameplay make the game both a joy and a challenge to play, and on top of that, it looks great.

And though the first eight levels can grow repetitive, Launching Pad’s updates to the game have added creative new levels that not-only reinvigorate the formula presented by the originals, but surpasses them. I have no qualms in saying Mighty Fin is one of the best iOS games to come out this year, and it’s definitely worth your 99 cents.