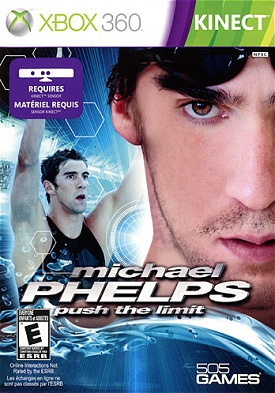 Overview:
When hearing the words ‘Kinect swimming game’, the mind conjures up some pretty wild images. Someone lying facedown on the floor, reaching out with their arms and kicking with their legs as they struggle to ‘swim’ through the carpet. Clearly Blitz Games Studios didn’t feel that Kinect’s floor detection abilities were advanced enough, otherwise they would have almost certainly had you writhing on your rug, craning your neck to get a glimpse of the screen. Instead, they’ve opted for a standing up swimming game, which make use of just your upper body.

Gameplay:
There’s no doubt about it; someone doing breaststroke in mid-air is a strange sight to behold, but the team behind the game have made mostly sensible choices with its design. Tracking just your arms does mean it cuts out kicking, a vital part of swimming, but it’s tiring enough as it stands. Including leg work could run the risk of bumping the game up into some kind of military workout category, anyhow.

The four swimming styles featured – front crawl, breaststroke, backstroke, butterfly – are a mixed bag really. Front crawl – probably the aspect everyone will come into contact with first and the main component of the game – handles well once you get the hang of it. Similarly, the Kinect responds well to butterfly, and for this stroke you can feel your off-screen actions affecting the onscreen standings. Breaststroke and backstroke, however, can be a little unreliable. 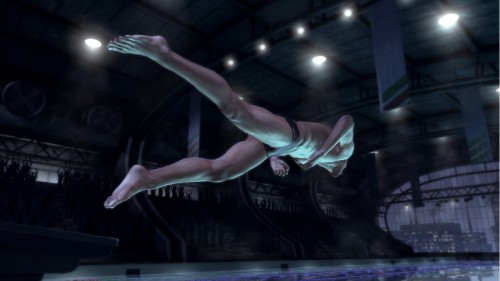 Firstly, breaststroke; while this too can become relatively consistent once you understand the exact arm movements needed for the game to agree with you, this all goes out the window once the race enters the final ‘Push the Limit’ sprint section, as, to much frustration, the game struggles to pick up the breaststroke motion when done at a faster rhythm.

Then there’s backstroke…where to begin with backstroke. Once of the great things about Michael Phelps: Push the Limit is that, because it only uses upper body, the space-deprived among us can breathe a sigh of relief. Finding the room for Kinect to see you from head to toe is challenging, so a game that only needs to see you from the waist up is significantly less of a furniture-moving strain. That is, until backstroke rears its ugly head.

The motion itself is a cross between backwards butterfly and front crawl, and you’ll be pleased to know the developers were sensible enough, despite it being a backwards race, not to get you with your back to the screen. The problem with backstroke comes from the starting dive. Up until this point, you may have been relishing only needing to be monitored from the waist up, meaning the problems Kinect has picking up the squat position that Kinect forces you to adopt for the backwards dive are all the more irritating.

Otherwise, the gameplay systems in place are fairly decent. The aforementioned diving mechanic is well handled for all other forward-facing strokes. You simply enter a crouch position and, upon hearing the starting pistol, straighten up and extend your arms. The game measures your response time and uses it to determine when you dive in relative to your opponents based on their response times. 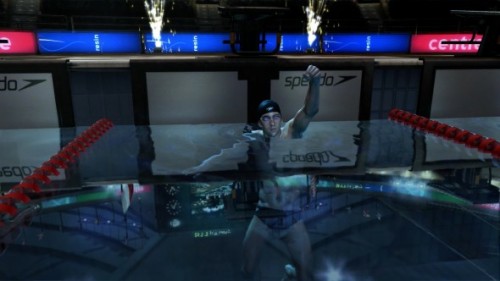 Elsewhere, the game tries to turn swimming into a science. It’s as if you have an ear piece-come-user interface software installed in your swimming cap. You have a stamina gauge which decreases if you don’t match the stroke rhythm and a boost bar which grows if you do match the stroke rate. In order to boost, you shout ‘boost; to the Kinect’s inbuilt microphone (the Kinect microphone is also used to shout ‘skip’ on automated videos). There’s also a strange middle section to endurance races where you no longer paddle, but play a mini-game to gather energy by holding your icon over the correct markers. It’s presumably present to prevent long races tiring you out, but it’s similarly frantic, if not more so.

The career mode is a fairly standard affair, comprising three seasons of swimming. You must place third or above to qualify for the next stage, ultimately working your way to the annual games to compete for medals. It does well to give you some time with all the strokes, even if your first encounters with backstroke and butterfly don’t carry a satisfactory explanation. They are explained later on through a tutorial, but this comes after you’ve already struggled through events for them.

Audio:
Unfortunately, the person who comes over your ‘head piece’ (who weirdly doubles up as commentator for the others) comes across as a bit of an arsehole, as the last thing you want to hear after physically exerting yourself only to finish last, is him calling you just short of pathetic. His semi-robotic tones soon begin to grate on you. Also, aside from the rare voiceover of a menu screen, Michael Phelps does little more than lend his name and physical likeness. 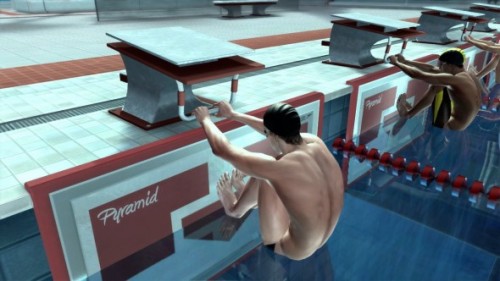 Visuals:
The graphics are nothing special, although you barely notice as you are so focused on the various sections of your HUD and matching the stroke rate. If you do pay attention to detail, the water effects are a little naff and the character models all look similar, but in reality, it makes no difference. You will be far too preoccupied with the gameplay to care about the visuals.

Overall:
I’m not sure how much demand there was for a Kinect swimming game, but I’m glad to see Blitz Game Studios didn’t go down the route of a typical motion-controlled sports like baseball, dodge ball and the like. They’ve tried an alternative and, to a certain extent, it has paid off. Some of the techniques behind the swimming are a bit iffy, as is the overall vision they’ve had with the sport, such as with the odd endurance stages or the boost ability. It has got to be one of the most energy-sapping Kinect releases – Fruit Ninja Kinect aside – although, most importantly, the movements are all fairly natural. There isn’t that straining, unnatural feeling the leaves you sore the next day – more a feeling that you’ve had a bit of an upper body workout.