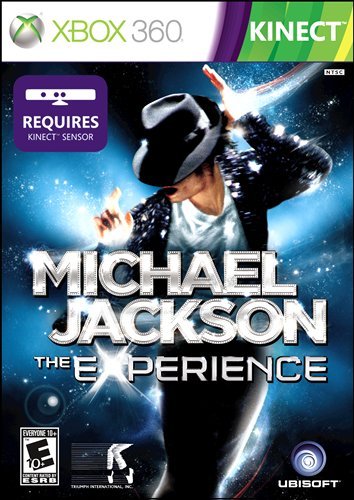 Overview:
Michael Jackson may have passed away but his memory lives on in his music. Practically all of us have heard at least one of his greatest songs and his voice will continue to be heard for generations. Now of course alongside a music legend has to come a few video games that involve his music and Michael Jackson: The Experience is exactly that. Much like other music games have created games solely for one band, such as The Beatles, Michael Jackson: The Experience focuses only on MJ. Now the Xbox 360 version of the title requires Kinect support which means you will be able to perform Michael Jackson’s songs like never before. But does the game itself stand up to the man’s name?

Graphics:
Now Michael Jackson: The Experience contains some rather impressive visuals with the Michael Jackson dancers providing plenty of flare to the stage as you dance across it. They aren’t completely visible and vibrant, instead they are outlined with neon like coloration that helps accent the stage that they are dancing on. The stages themselves often take on the impression of the songs that you are dancing too. The background becomes spooky when you dance to Thriller and the ground lights up similar to it did in the music video for Billie Jean as you step along to the song.

Now Michael Jackson: The Experience takes the same approach as Dance Masters and places the player themselves on the stage alongside the rest of the dancers. This approach is quite impressive to look at and the player is given the same grayed out and neon light effect that the other dancers receive. Unlike in Dance Masters however there is occasionally minor input lag that makes the dancing avatar on the screen act out slower than the player is actually moving. This can not only disrupt your own dancing rhythm but also looks out of place alongside the rest of the dancers on stage. 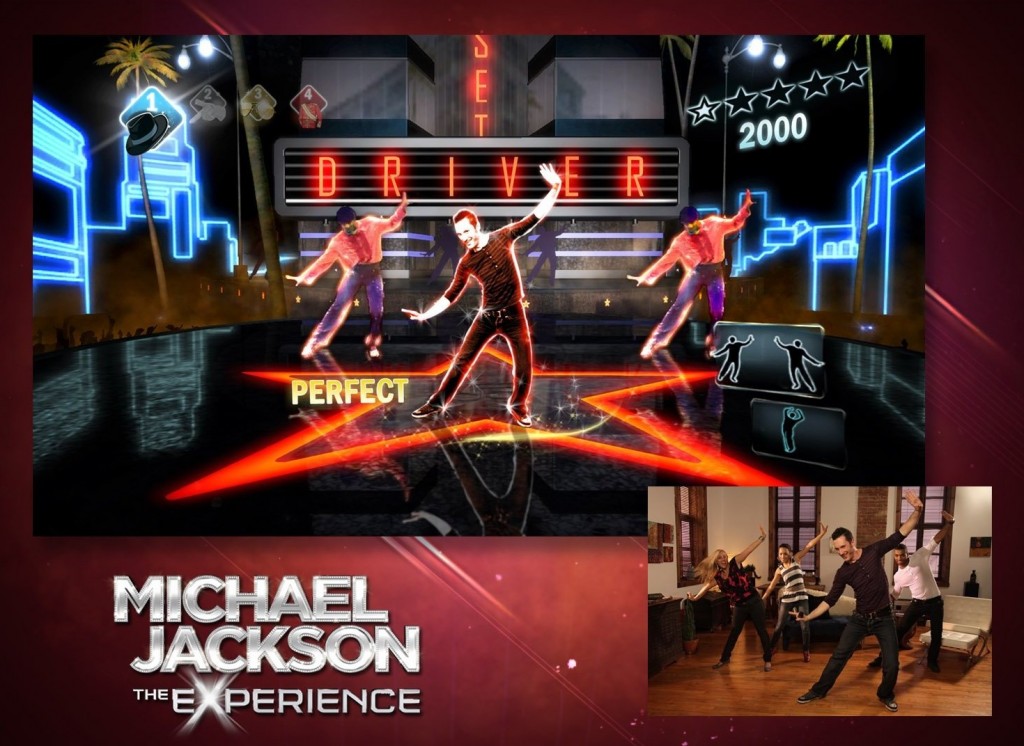 Audio:
If you want to listen to any Michael Jackson’s songs then you are in luck because practically any song that you would want to listen to by MJ is included on the disc. Some of the most popular songs such as “Beat It,” “Thriller,” “Billie Jean,” “Don’t Stop ‘Til You Get Enough,” and “Earth Song” are included in this package. These songs are all in their original format which will give players the full experience of Michael’s songs.

On the other hand there really isn’t a whole lot included in the game besides the songs. There are no music videos to sit and watch, though snippets are played during some songs, and all of the songs are available from the get go. Also at the moment there is no way to actually download additional songs to dance/sing to, the case for the game says that there will be DLC but at the moment there is no option for such content.  The MJ School training videos are well done and easy to understand if not a bit difficult to learn in the end.

Gameplay:
Michael Jackson: The Experience for the Xbox 360 makes full use of the Kinect, meaning of course that you require one to play it. The user interface is easy to use and doesn’t provide much of a hassle and is actually one of the better implementations of a Kinect controlled menu system. As you enter the dance mode you will be treated to the list of songs that are included in the game, but before you make your decision on what to perform you have to select how exactly you want to play that song. 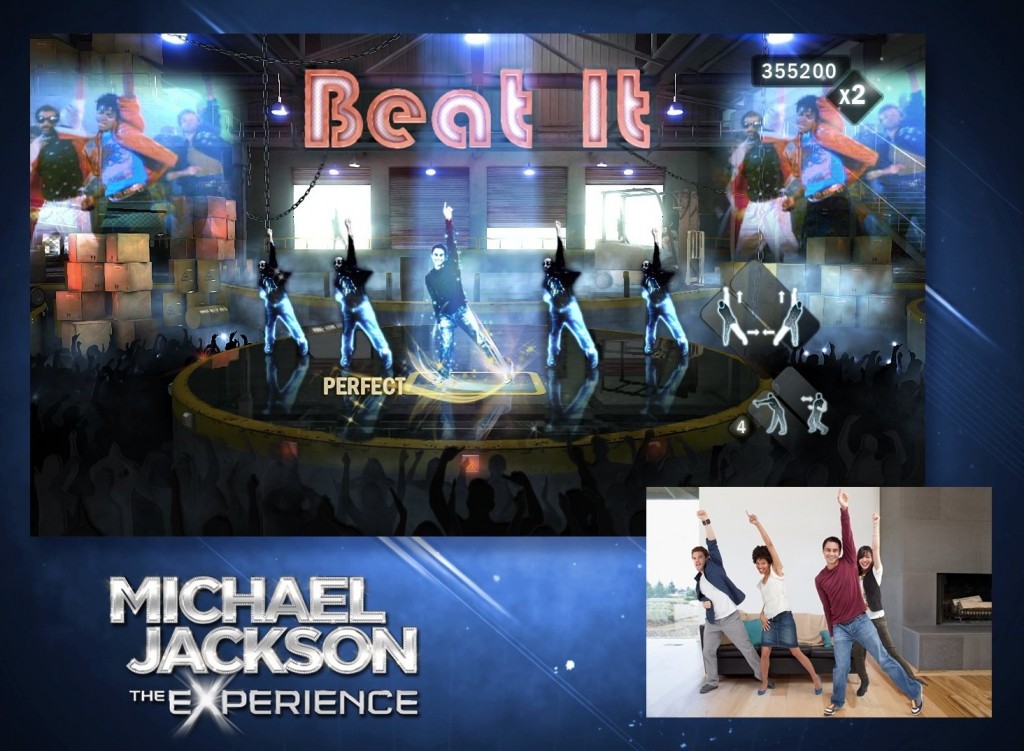 Some songs in the game give players three different choices on how they want to perform the song. They can Dance which allows the player to only dance to the song as they follow the on screen cue cards, they can do a Performance where they will be singing aloud and dancing, or even a Master Performance where they will dance and sing to a harder routine than normal. The only problem with this aspect of the game is that not every song has these options and some of the songs in the game only allow the player to sing them with no actual dance moves included in the whole routine.

Now the karaoke aspect is certainly hit and miss as far as Michael Jackson: The Experience is concerned. Whether it can be credited to the limitations on the Kinect’s microphone or something in the game itself, the Kinect’s built-in microphone picked up the song on the television and performed the karaoke 100% correct whenever singing was involved. To remedy this problem you can use any variation of a microphone peripheral and simply hold the microphone as you dance along. In the end though, the game does not have you sing and dance literally at the same time but gives a visual cue as to when you will be switching between singing and dancing.

Your performance on a song is given a five star rating but there is actually no way to fail a song. Your moves are rated as either Miss, OK, Good, Almost or Perfect depending on how close you are to the move that you were required to perform. You will be able to tell what move you will be required to perform via cue cards that appear on the bottom right of the screen. The next cue card will appear when a countdown ends which allows the player to at least know when they will have to change their movements. Unfortunately if you do happen to miss a move the game will not actually show you how you messed up that move which is a disappointment for those looking to improve for the next time they perform the same routine.

MJ: The Experience contains the standard multiplayer mode that all of the different dance games have. However it goes a step above by allowing players to pair up in teams of two against another team of two that allows four players to battle it out to see who is actually the better dancer. One team, or one individual player if you are playing one on one, performs a section of the song and then the other team has to dance after the first player swaps out. This allows players to do battle with one another or they can even dance a co-op routine this way with a combined score in the end. 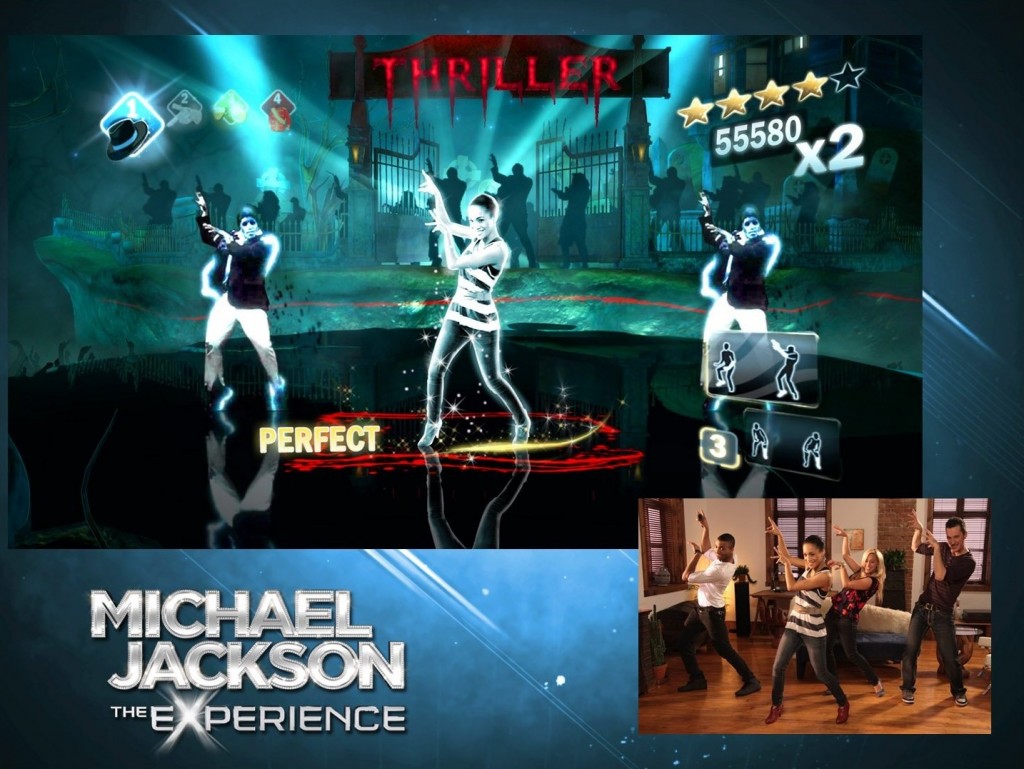 Now the game is still quite enjoyable for the songs themselves and will be great at parties but unfortunately there is zero sense of actual progression in the game. Besides acquiring achievements there is nothing to unlock in MJ: The Experience.  Other dancing games on the Kinect feature at least some sort of unlockable modes, dancing stages, or even characters but this one does not which can be a problem. Then again with the inability to actually fail a song, it makes sense to not allow unlockable content.

Overall:
Michael Jackson: The Experience for the Xbox 360 contains everything that a Michael Jackson fan will love. It has nearly all of his classic hits and some of his most famous moves are weaved into the routines flawlessly. The only let down is the fact that there karaoke is extremely hit and miss with the Kinect sensor and the use of a microphone only seems to hinder the supposed “controller free” experience. Considering there is also no feeling of progression some people may find themselves growing  tired dancing with zero reward. At the end of the day MJ: The Experience is still a pleasure to play, but its faults certainly weigh down what could have been a stellar experience.