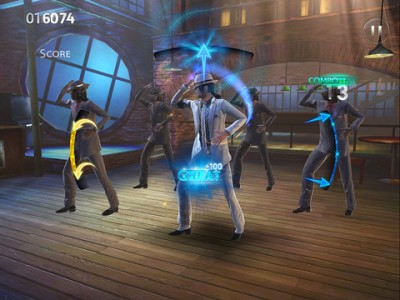 For anyone that’s played music a rhythm game on the iPad, it usually just involves one action – involves taping on the screen in time to the music. Michael Jackson the Experience HD however takes this simple notion up a notch. Players will have to draw shapes with their fingers instead of just taping on the screen. The style of gameplay defiantly adds variety to songs that you will be playing. The shapes can be drawn anywhere on the screen, not just in a selected area that you might find in other music rhythm games, which is an added bonus. 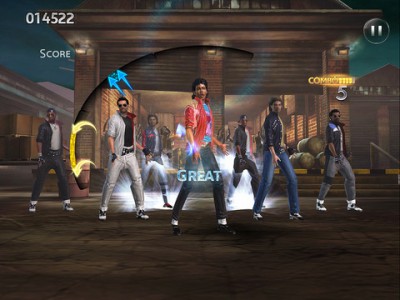 Like all music rhythm games, it takes a while to get good at song and practices of cause makes perfect. The game’s song difficulty is quite leveled in each of its three difficulties – Rookie, Medium and Expert. As you would expect, ‘Expert’ is very hard and players will need to really practice to conquer this level.

As you progress through a song and gain a high combo score, backup dancers and changes to each song’s scenery will be added to the game to create a livelier atmosphere. You can’t fail songs out right, but if you are doing badly at a song the scene will detract until it’s just Michael Jackson by himself, and vice versa if you’re doing well. This is a very nice system and feature of the game, as you’re success at a song isn’t tracked by an annoying on screen meter but by music scene itself, which means you can focus on the on-screen commands and visuals. 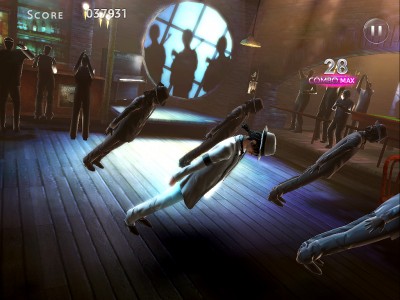 For a game that is focused around dancing thankfully Michael Jackson the Experience HD looks very good on the iPad. Animations and character models look very sharp and natural as they dance around on screen. Occasionally during a song players are allowed to Freestyle, and any shape combination drawn by the player is performed on screen by the Michael Jackson avatar. The animations here are stringed together very well. 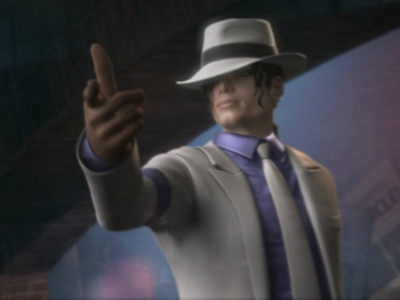 Each song performed in the game is a take on the music video/short films of Michael Jackson. Remember that club in ‘Beat It’? Well you’ll be playing in it. Each song is accompanied by cutscene which all faithfully recreate their memorable video clips.

For music rhythm game, the most disappointing thing about Michael Jackson the Experience HD is the fact that only four songs (Beat It, Smooth Criminal, Speed Demon and Blood on the Dance Floor) are included in the game. The game’s length is quite short, I managed to beat all four songs within one sitting.

If you’re willing to fork out the money, another three songs (Black or White, Billie Jean and Hollywood Tonight) are available but require individual purchase at $1.99 a song. This is really disappointing from the developers as you are not getting your money’s worth for the price you paid for the game. Four songs really is just too short for a game that is centred on music. 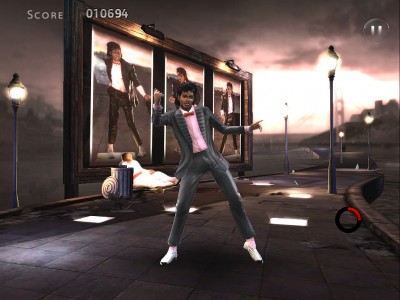 But for what it’s worth songs themselves are great, they are Michael Jackson’s hit and songs that everyone knows and loves. It is just a shame that they aren’t many of them, although the game does say that more songs will be coming soon.

Taken as a whole, Michael Jackson the Experience HD is a good music rhythm game. The game mechanics work very well and are an improvement on music rhythm games. The game presents itself quite nicely with slick cutscene cinematic before and after each song, and character model animations similarly look very slick as well. It is just strange then that the game is seriously lacking in content with only four songs includes, and an additional three songs available for purchase. This game could have been something very special but unfortunately it misses the beat and falls flat.

I give Michael Jackson the Experience HD for iPad: