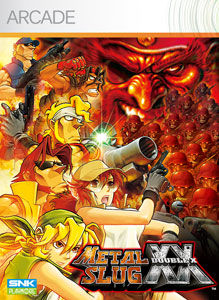 Metal Slug is a side-scrolling action series that dates back to SNK’s Neo-Geo Arcade Machines and portables. Another thing to note is that this game was released for the Nintendo DS as Metal Slug 7 and later released on the PSP and Xbox Live Arcade as Metal Slug XX. 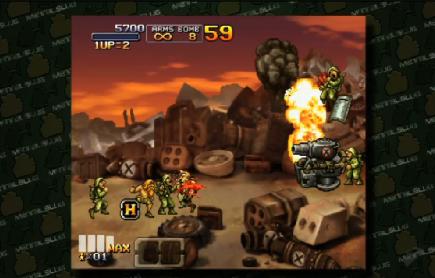 Metal Slug XX doesn’t have the strongest story but there is one there played out in animations between levels. Take out the evil general and his army. Simple story and it does seem to play out decently between levels. You have six characters to choose from the start, the familiar Marco, Fio, Tarma and Eri, and Ralf and Clark from the King of Fighters series. Leona from KOF is also available as DLC. You must then go from one area to the next and defeat the opposing army and their futuristic weaponry and save the bearded prisoners.

Gameplay
This is my favorite part of Metal Slug XX. It plays just like all the arcade classics. The gameplay is fast paced but never really became over-bearing at any point. Every character you play as has their own strengths and weaknesses so every character plays slightly different from the next.

Metal Slug XX also gives a variety of different types of gameplay. The main campaign mode is seven stages and only takes about an hour to complete. Every stage is divided up into sections where you must take out all of the enemies on the screen and move to the next part of the level. To me each level played out differently, so I did not feel like I was in a repetitive cycle like some arcade titles out there. Examples being having to dodge large death balls and dropping platforms to parachuting straight into a pool of enemies all while just trying to stay alive. The action is intense and once it gets started, it doesn’t stop. To mix it up even more, every stage has a boss at the end with the classic weak point to kill strategy.

Every time you save a prisoner, he will drop a weapon. Weapons work quite well and are easy to switch between. Some include the machine gun, rocket launcher and some other high powered artillery. Players also have bombs at their array to help take out some of the bigger enemies. You have infinite lives and continues as well which I enjoyed as I died quite a bit on my first run, but others might think this takes away from the challenge.

Later on in the game, enemies will be everywhere on your screen upping the challenge. All of the chaos runs smoothly for the most part while attempting to take down all of the soldiers, mechs, and enemy vehicles on each section. Combat school is another mode that works great as you must try to complete all 70 select missions which should keep you coming back if your looking for a new challenge after standard campaign.

The gameplay shines through and delivers what is promised, I do feel like more additions could have been made but I am pleased with how everything was fully functional and truly made you feel as if you were back in the arcade. Sound & Graphics
Like most Metal Slug titles, you get the sweet 16 bit tunes playing as you play through the game. I really noticed the music playing almost over the game play. The music blends together perfectly with the game play and delivers a much better experience to the player. Characters are voiced somewhat and play out quite well and sometimes comical into any situation, I could probably best compare this to the side-scrolling games on the genesis.It may sound like a cheap way out, but the sound used for Metal Slug XX makes it feel more like an arcade title, which is what I am looking for when I play.

The graphics are all 2-D sprites. Each character is well made and fits into the setting of the hectic warzone. Just like the sound, the graphics are made to give the full classic arcade experience. I didn’t notice any slowdown from the chaotic levels with sprites everywhere on the screen so that is definitely a huge plus. The characters also have some bonus charm to them, like when I was attacking enemies and a helicopter dropped a line of bombs killing my character and the enemy just shrugged his shoulders and walked the other way. This helps from feeling like your battling generic opponents throughout the whole game. From the bosses to the 7 stages, you will find every single world is detailed and truly makes each new section feel like a new experience. Overview
Metal Slug XX may be a port, but with anyone without a PSP or Nintendo DS for that matter, this will be a great title to add to your collection. If you love old-school arcade titles, this is for you. I do not agree with the 1200 point price due to the fact that it takes only an hour or so to complete the main campaign. This is a fun game nevertheless and the extra modes and co-op will lengthen your experience with it. For gamers wanting a true arcade experience, Metal Slug XX will grab you with it’s quality of gameplay, music and quirky animations and graphics.

I give Metal Slug XX: