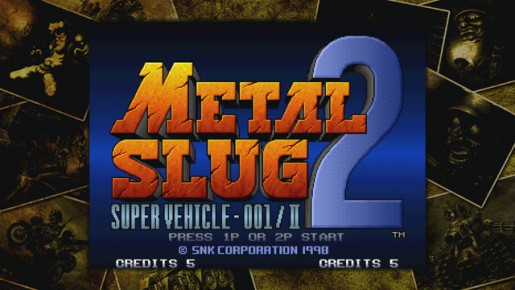 MARCO and TARMA return to the battlefront on NEOGEO Station, this time accompanied by two new recruits FIOLINA GERMI and ERI KASAMOTO, in order to thwart the new coup attempt by General Morden, infamous leader of the Rebel Army and main antagonist of the “METAL SLUG” series. Fight alone or with a buddy, on foot or aboard a tank, and deliver the prisoners for freedom in this masterpiece of run-and-gun action shooting from SNK! (Official Description of Game from SNK Playmore.)

Continuing their streak of releasing classic NEOGEO titles onto the Playstation Network, SNK PLAYMORE has updated Metal Slug 2 for the PS3 and PSP consoles. Are you up to the challenge?

Metal Slug 2 was originally designed as a simple quarter muncher complete with frustratingly hard boss battles and unfair artificial intelligence. Luckily, this release of the game fixes all those problems. First off, your PS3 does not have a slot that accepts coins (we haven’t found one anyway) so you will only be paying one flat upfront cost of $8.99 ($6.99 for the PSP version), which is way cheaper than feeding an arcade bucketfuls of quarters. By our calculations, once you have used up 18 continues you’ll have definitely saved money by playing this updated port of the game. And that is if the arcade game costs only $.50 a pop! Trust us, you will use up the lives fast too, especially if you set the difficulty to MVS, the original arcade’s difficulty setting. Fortunately, there are options for EASY and Normal difficulties in this adaption so you won’t be getting too frustrated at the intense gameplay present. 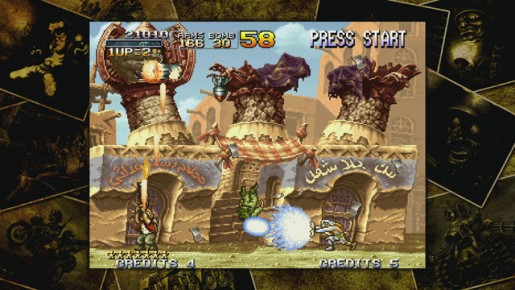 Speaking of gameplay, Metal Slug 2 features extreme action with plenty of humorous circumstances and some great explosive weapons. At its core, Metal Slug 2 is a 2D shooting game with some unique elements that help it stand out from the rest of games in the same genre. Starting off, you will receive a single shot gun. By collecting items and mowing down the bad guys, this gun can eventually get upgraded to a machine gun, flame thrower or laser shot. There are plenty of other options available too. However, the best weapons are the ones you can mount. Tanks, jets and camels are all present in the game. Yes, there are camels with uber-powerful chain guns mounted on them and they deliver a wallop.

Overall, the gameplay is solid and addicting. The controls are not as finely tuned as I would like them to be and the game is firmly rooted in an older game design, but this game offers some great fun, especially because of its unique personality. In addition to being able to ride a camel, you can also turn into a mummy, a fat guy (where your weapon turns into a fork) and other hilarious cameos. This game doesn’t take itself seriously, at all. That is a good thing too, because although the difficulty IS rough, it isn’t one of those games that punishes the player just for the heck and the funny moments keep everything humming along just fine.

The story in Metal Slug 2 is nearly nonexistent. After playing the game for awhile I still had no idea who anybody was why soldiers were attacking me or why huge boss battles would take place. Even searching through the menus and in-game booklets did nothing to help me out in this department. Only after I looked it up on the official website and Wikipedia did I get a clue as to what was going on. Sure, this game was made back in the day, but there should at least be a paragraph in the instruction manual or menus explaining the background. Even a bare bones explanation would have sufficed.

Undoubtedly the weakest part of Metal Slug 2 is the graphics. SNK did hardly anything to make them different than the ones that were already a part of the game. Although retro game fans may rejoice at being able to replay the game in its original pixelated form, modern HD fans will feel like tearing their eyes out. For $9.00, it would seem like maybe this game could be at least be remastered.

One feature that SNK did implement well was the coop. Metal Slug 2 can now be played in online or offline coop. Playing with others is always more fun and being able take down baddies with a buddy almost makes you feel like you are in an actual arcade. 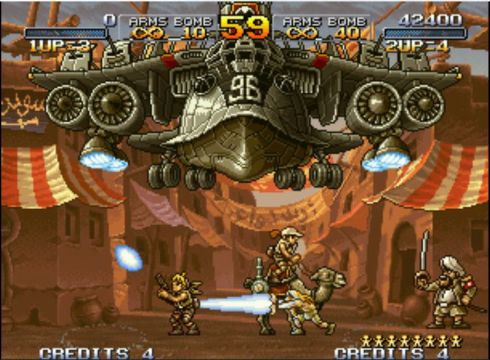 If you have a spare few dollars in your PSN account or this game is on sale, it is a a good buy. There is lots of replay value in this game and the coop is awesome. Arcade gamers will love the tough difficulty and true to form nature of the game. However, the lack of updated graphics and the lack of any other features makes this game a little disappointing. That being said, you could buy much worse on the PSN than Metal Slug 2.