Meltdown is the story of a man and his guns, in space, destroying evil robots. It is a little cliché, but it is definitely a fun experience. It has some awkward to learn controls, and repetitive visuals and audio the game has its flaws, but they are easily overlooked when compared to how fun this game is, especially with its awesome drop in/drop out multiplayer mode. 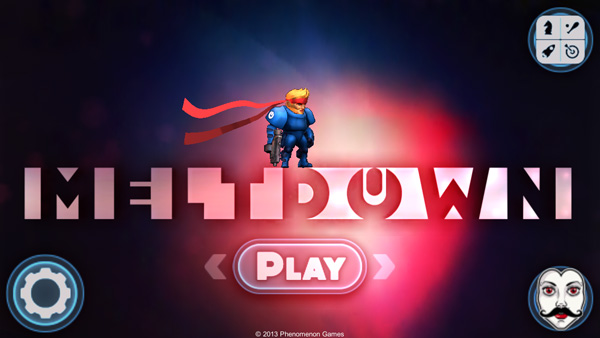 Meltdown places you in the role of Zed, a soldier who is tasked with shutting down the core of the Meltwown-Classed Base Platform; Orion. Orion is suffering from an AI malfunction that is causing all the robots and machinery on the platform to go haywire.

The story is told out in a fully voice acted cinematic that sets up the premise of the game. However it is pretty basic and really only serves as a plot point to introduce the game rather than drive it along. All in all, while it is a fun introduction, the game wouldn’t be any better or worse off without it. 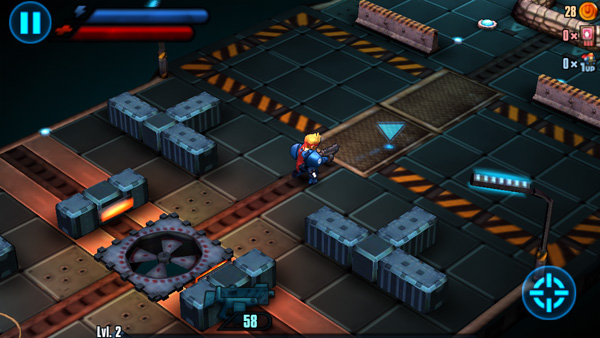 Meltdown is an action based run and gun shooter. Tapping on an area of the screen will have Zed running off in that direction. While the controls seem intuitive and familiar, they can take some getting used to. In most tap to move games, your character will always be oriented in the middle of the screen, but that isn’t the case with Meltdown. The result is frequently needing to switch which hand you will be tapping the screen with. While this feels cumbersome in the beginning, you will quickly adjust to the system, especially as the attack mechanics are made to accommodate.

Instead of simply pressing or holding down on the screen to shoot, Meltdown features an on/off system. When your gun is switched to On, you will immediately start shooting whenever there is an enemy within range. This serves to take away a lot of the confusion from the movement controls, but sometimes you can encounter a few problems with this method. 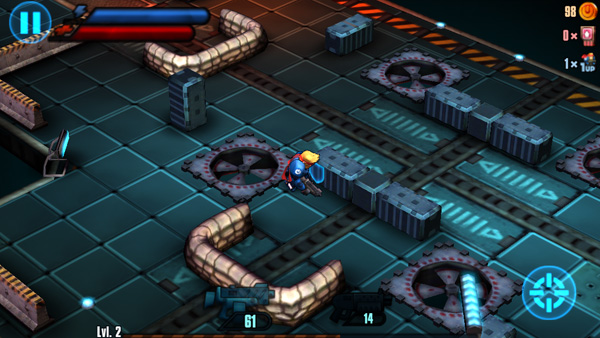 The game comes pre-packed with 30 different stages to keep you going for a long time. At the end of each stage the player is ranked based on damage sustained, enemies eliminated and time taken and given a score. Killing enemies also awards you money which can be spent between levels on upgrading your weapons and purchasing new ones. There are a tonne of different weapon options to choose from, and with two firearm slots and a melee spot there is enough to customise your character to suit your own play style. 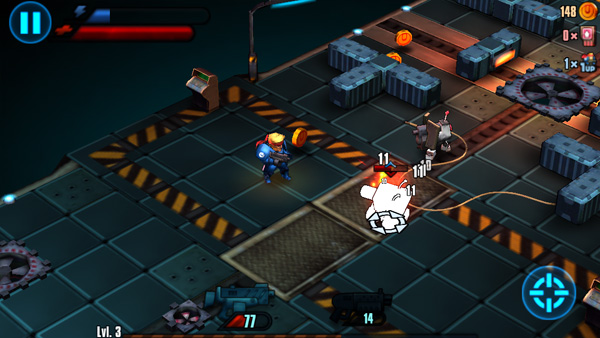 The downside is that some of the items required for upgrades can sometimes be a little scarce, almost convincing you to spend real-world money to upgrade through the game’s shop. However even after playing to level 30, I didn’t feel forced to head to the store, just that there was one available if I chose to.

What is perhaps the best draw for Meltdown is its awesome co-op multiplayer. By starting your game online, you will have players join in and help you with the robot killing mayhem. Additional players can really speed up your times and improve your overall level scores, as well as having a tonne of fun doing so. Furthermore, it is drop in/drop out play that doesn’t interrupt the game at all while you play. 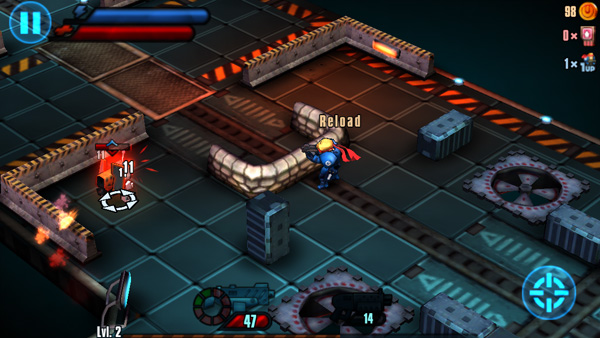 Visually, Meltdown is by no means a killer app, but it isn’t a bad looking game. Zed is outlined in a medium black boarder that helps him stand out from his surroundings. Since this game is set in space, aboard a largely AI controlled platform, there are a lot of silvers and metallic colour littering the backdrops.

The backdrops and enemy models are reused in every stage, just moving and shuffling around where they are located, so the game can look a bit repetitive. Honestly though, usually you are trying hard to not get hit that you wont often notice or really care that the same sandbags have been used for the last 5 stages.

Audio wise, the initial cut scene is voice acted, but aside from that there isn’t much to go on with sound effects. Robots clank and grind along, and guns make a surprisingly realistic sound. However the real sound comes from the 8-bit style soundtrack which is just awesome. Mixing a rock n roll style tune to 8-bit gives this game a unique sound that just works. 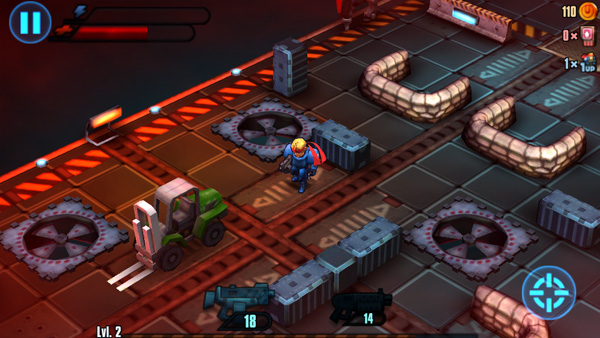 Meltdown isn’t a perfect game, but it is a fun game. It has its share of flaws, but most of these are easily overlooked due to the amount of good that this game does. Repetitive visuals and clunky controls hold this game back from being a must-have on your mobile device, but one cannot overstate the awesome co-op mode available to players, and with 30 levels already available, with more coming soon there is a lot of value to be had here.