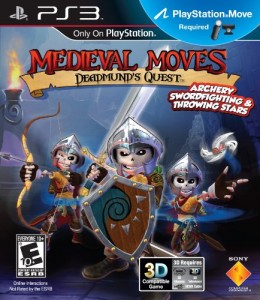 The Playstation Move is receiving a second wave of titles at the moment. I would say that Medieval Moves: Deadmun’s Quest is the leading title of this wave of games. You play as Prince Edmund and use the Move controller to swing, shoot and throw through hoards of skeletons. However, that is all there is to this game. Despite the sharpness and accuracy of the Move controller, the game will get repetitive. Adding to the flopping gameplay is the on rail design, which sucks out any freedom of exploration this game could have offered. The visuals and audio reflect the audience Sony is trying to capture and the story is pretty basic but fun. 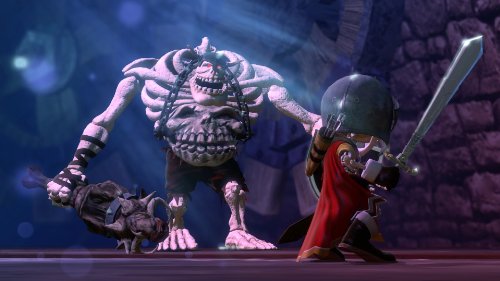 The game starts off with Prince Edmund, along with his ghostly friend King Edmund the Very First, participating in a training session (which happens to be the tutorial of the game). After an army of skeletons invade the castle, Edmund is forced to flee the scene, only to be stopped by an evil sorcerer by the name of Morgrimm. Due to the magic he exerts, everyone one in the land are now skeletons. This does include our hero Edmund, who now takes the name of Deadmund. His job is to defeat Morgrimm, reclaim an amulet stolen by Morgrimm and make everything right again.

Yes, the story does use typical fantasy tropes and clichés, but it does not mean that the story is bad. In fact, the story is quite fun. It is charming and quite humorous at times, usually from King Edmund the Very First. The writing can be witty but can also feel lazy because this is meant to be a kid’s game. This also means that some of the dialogue can be downright stupid, seeing that now days kid’s media equates to stupidity. Overall, the story, despite reliance on tropes, is quite fun and enjoyable. 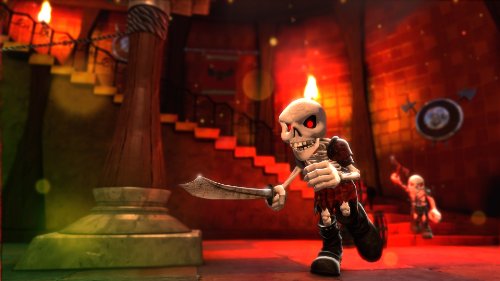 This game is pure motion control, so the Playstation Move is required. The great thing is that the player will only need one in their hand.  There is the option to play with a second Move controller. So, once who have the preferred amount of motion controllers, now it is time to play the game. The game is basically an on rail adventure with melee and ranged elements making up for the combat. Players will swing their sword, shoot arrows and use throwing stars to combat numerous foes. Weapons will be upgraded via scripted events, such as the receiving the Captain’s Sword early in the game. Players will also be involved in collecting various collectables. Coins and gems offer points for the player, as well as the task of collecting scrolls, which contain background information. Milk also plays an important role as well as it serves as the potion of the game. Milk isn’t sparse in the levels, so death is the last of the player’s worries. There are also puzzles, like turning gears and pulling levers, throughout the game.

The enemies in this game are basically the same (with minor differences), save a few bosses. They will act all the same, thus giving a feel of repetitiveness and believing that the task is just monotonous. The problem also lies in the fact that the player will be swarmed by the lowest of the enemies, which are just regular grunts. This is lazy design, as difficulty should not equate to piling multiple enemies onto the player. The player can not cover all sides of Edmund, so be prepared to be outflanked quite often. The one-on-one mini battles provide some relief but no challenge, as one will anticipate every move. They are open books, the big brute skeletons. The boss battles, although offering new enemies, have a rinse and repeat feel to them. They require no strategy to defeat, just find what needs to be done and repeat it until the player wins. It just brings out annoyance rather than satisfaction.

The motion control scheme works quite well, although there are minor inconveniences. Most of the time, the camera captures the precise ark of the sword swing. It also measures the power of the sword swing, punishing the player with a weak strike. The motions of using a bow, which is placing the Move controller behind the player like fetching an arrow from a quiver, works alright nine out of ten times. The player might encounter a situation where the camera does not register the motion, even though it was performed. This problem can also lie when attempting to heal oneself via a bottle of milk. One must hold the Move controller as if they are drinking a bottle of milk. However, at times, it would not register. This creates an atmosphere of frustration and annoyance for the player. 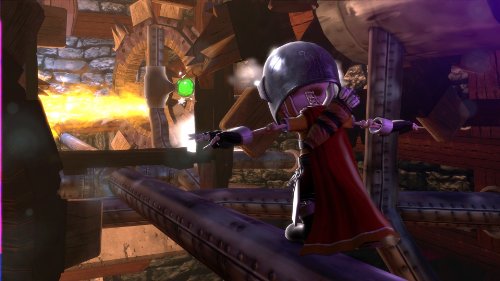 The main underlying problem of this game lies within the on rail element. This reviewer does recognise the audience being that of children and not of core gamers. However, that should not excuse the lack of freedom in this game. Considering its setting and combat system, a game like Medieval Moves cries out for exploration and adventure. Through the on rail design, the game lacks engagement to a certain extent. The fact that the player is allowed to take different paths at certain points of the game is more of a forced attempt by the developers to allow freedom within the game. All it does is shows not only that movement is important, but reinforces the repetitiveness of the gameplay. Yes, this is a game where playing for quite a period of time is not advised. The targeted audience would be the reason, but it shouldn’t isolate other audiences all together.

The game also offers multiplayer, believe it or not. There are both online and offline modes of play, but don’t expect a plethora of game modes. Instead, one would find only a couple to play with. They are not too bad for younger kids. What is a great positive is that the gameplay in the multiplayer modes don’t restrict the player with on rail gameplay, which is a welcoming change for those who grow weary with the lack of freedom in the single player story.

Overall, for who the game is meant for, then the gameplay is great. It is short burst action that will keep the kids entertained. However, the shallow combat system, tied up with the terrible decision to make it on rails and holding the player’s hand throughout the whole game, those looking for a great adventure game that utilities the Playstation Move might want to wait for the release Sorcery. Multiplayer offers respite from the on rails experience, though. 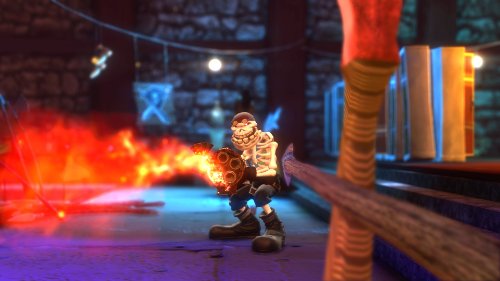 The visuals for the game are not stunning, but they are not meant to be. The game has animated charm. It is a game for kids, so the game uses over the top facial expressions and crazy 3D models, including the enemies. What was quite good was the use of comic book panels as the cutscenes of the game. They were quite bright, something that seems to differ from the usual brown tints of more core gaming. The 2D models of the comic book cutscenes also look good. The environments never look dreary, even if it is a dark building. The over the top style adds charm and downright silliness to a game that does not want to take itself serious. That overall lack of seriousness is also reflected in the audio design and soundtrack of the game. The soundtrack creates its own charm, adding to the atmosphere of the game. The voice acting is decent, with each character given a voice which would suit each role. Overall, the visuals and audio work well in the context of the game’s audience.

This is a case where so much that can go right actually goes wrong. Medieval Moves had potential, but it goes to waste. Despite a fun story, visuals and audio that fit the overall atmosphere and context of the game and the multiplayer providing a breath of fresh air, the gameplay brings this game down. The repetitive nature of combat and the fact that the designers went with an on rail movement system will force players into cries of annoyance and frustration. This is coupled by the fact that the designers will create the game more difficult in a overwhelming way. Kids might enjoy it, but no one else would. This reviewer was looking forward to reviewing this game, but, upon playing it, he will question why he wanted to do it.