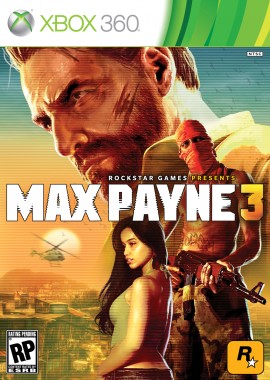 Max Payne has been a franchise that started in 2001, 11 years ago. The franchise also inspired a movie (which, no surprise, didn’t receive good reviews), proving just how popular the character is. With the last installment released nine years ago, there is no question that this is long awaited. There was also a changing of hands of the developers, from Remedy Entertainment to Rockstar Games. So, what do these changes and this long pause between installments mean for the game? Will it adapt and be worthy of the title of Max Payne, or is it just another revival that falls short?

The big thing that comes to mind when you say Max Payne is Bullet Time. That is what really set it apart from other third person shooters, and it is most certainly present in Max Payne 3. In fact, it is entirely necessary, since Max has a habit of getting in extremely sticky situations against many armed and angry men. Activating Bullet Time allows you to slow down time, enough to see the bullets flying through the air at you, and take down some of the thugs.

Shoot-dodge is another useful tactic that will send Max sailing through the air and allow him to swivel all around him to take down the bad guys until he eventually falls to the ground. Utilising these aspects into your automatic combat may take a little adjusting, but are definitely things that are invaluable to you during the bigger firefights.

Both shoot-dodge and Bullet Time are revived aspects from the previous games, and they work really well in this game as well. In fact, as mentioned previously, they’re necessary. Plus, Max falling realistically at the end of shoot-dodge is something that is pretty impressive, and speaks highly of just how much effort has been put into making it as realistic a game as possible. 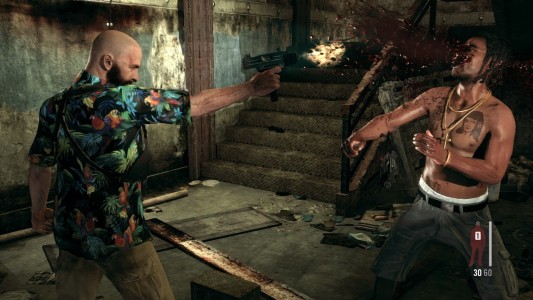 Another great slow motion mode is Last Man Standing, which allows the player to take ‘revenge’. If they are killed with one painkiller left, then if they can identify and kill the person who delivered the killing shot, they use a painkiller automatically to recover energy and come back from the brink. This is really handy in the larger of fire fights, perhaps when you’re a little preoccupied with the guys bearing down on you and forget that your health is not in great condition. Plus, there’s an awesome sequence to go with it.

The storyline really rules the day for Max Payne, even if a lot of the time the immediate scenes involve you shooting at people because they’re shooting at you. Since there are no load screens, with the game loading during cut scenes, it means that you will have to sit through a lot of cut scenes. Personally I loved it, because I love when a game actually has a good story line instead of the usual go through, shoot people, don’t ask questions. However, if you’re the type who just wants to shoot at things, then you might find it annoying that you can’t skip cut scenes while the level is still loading. And those loads take a while, which is no surprise since the levels are so detailed and the loads are happening in the background of a cut scene.

The amount of detail that has gone into the game is astonishing. Just from the simple physics of each character, including the random thugs you’re shooting. They fall according to where you hit them, and if you enter slow motion due to it being the last enemy in the group, you see the bullet enter him and the exact reaction to that area being hit. 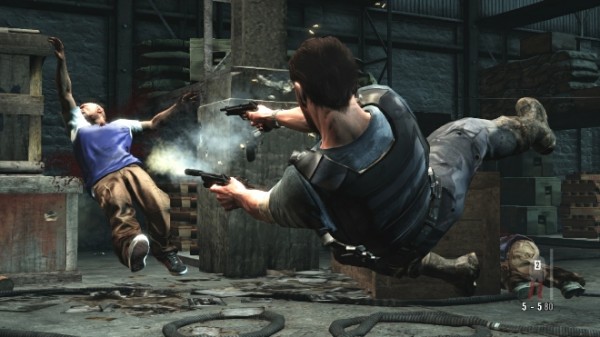 The world around you is realistically destructible. Even the places you can take cover behind. The cover mechanic has been lifted from GTA and Red Dead and allows you to snap to cover and shoot from it, which is something most people are used to doing. However, in one particular scene in an office, the flimsy cubicle walls only provided cover for a short amount of time before they were blown to pieces and Max was vulnerable once again.

I’d also recommend exploring the areas thoroughly, since you can pick up parts of ‘Golden Guns’, and once you’ve completed a Golden Gun then the gun you’ve equipped changes to gold, increases the weapon’s damage by 10% and has an increased ammo capacity for each clip. Plus you also get an achievement for collecting all of them. 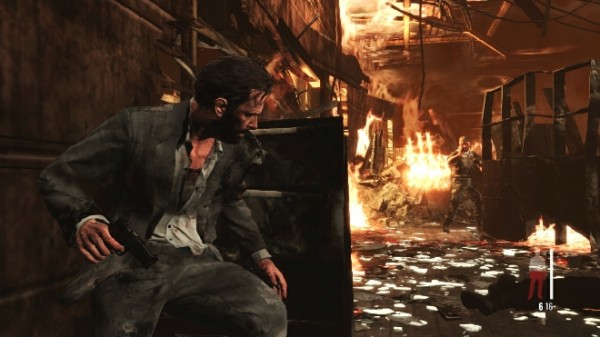 Achievements are handed out pretty regularly in the game, from shooting people in the arms (Arms Dealer, because if there’s one thing Max Payne is good at, it’s puns), shooting from cover, or just plain shooting. There are plenty of achievements, including level-specific ones, so for you achievement hungry people out there, go nuts.

There are some truly, truly hectic levels. At several points I felt like my mind had been blown by the awesomeness, and the craziness of what we were doing. There really is nothing like tearing through Brazil, or New York, with a couple of guns, dangling from various forms of transport, and taking down hundreds of guys. The game is as fun as it is difficult.