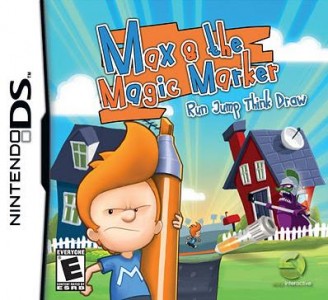 Overview
Since launching last year, Max has made quite a mark on the gaming universe. If you have never tried the indie hit yet, this romp puts you in control of a young boy who sets out on an adventure with a magical marker in a hand drawn world. The entire experience is a platformer at heart, but sets itself apart from other genres by letting the player utilize their own creativity to keep Max safe and sound on his colorful journey. After a year of success, Easy Interactive have now brought the game to the Nintendo DS. Considering that the DS uses a stylus, you would think that this would be our young hero’s true home. How does this platform fare for the already popular IP though? Here is my review for Max and the Magic Marker. 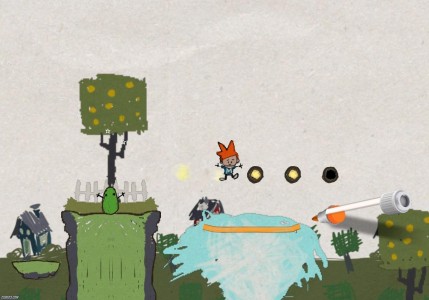 Story
Max and the Magic Marker starts off with a young boy receiving a mysterious package in the mail. As you would have guessed, that young boy is Max and enclosed is a magical marker. Max, who already loves to draw takes the tool and draws a picture of a monster. Before our budding artist can even show off his masterpiece, the monster jumps off the page and comes to life, jumping into other drawings. Max must stop his chaotic creation and doodles himself into the world. With just his newly obtained marker in tow, it’s your job to take control of Max as he tries to stop his own artwork.

As a whole, the whole story is rather charming and meshes well with the game’s concept. I mean, who wouldn’t want to be in the imagination of a child? Even though this story is heartwarming and gentle, following the entire narrative is a bit hard to do as the main story is just told through text sequences and run-ins with other characters. A few cut-scenes or even still images could have done a lot to make up for this, but most will probably overlook the lack of plot as just like the gameplay within, Max and the Magic Marker is rather light on delivery and meant to be accessible to all ages.

Gameplay
As I mentioned, the very core of Max and the Magic Marker is a platformer. Each level is broken down into several segments, all separated by checkpoints. Once the player crosses a checkpoint, they must then relinquish their ink and progress through the next area by solving one or more environmental puzzles. Those expecting Max to control like Mario, Sonic, or any other platforming guru will be a bit disappointed however as he is a bit slow, movement wise. Using the D-Pad for control, players can jump and walk throughout the world and must keep an eye out for many dangers such as water, pits, and enemies. Some of these can be avoided by simply jumping, but usually the game requires you to utilize your magical marker to safely cross longer jumps or to access platforms located at a higher point. 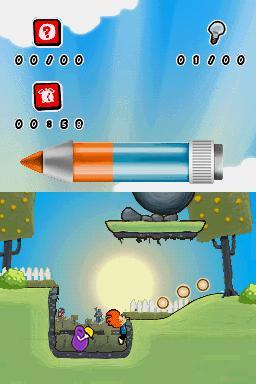 Compared to the many other versions of the game, the marker controls are much more precise due to the Nintendo DS’ stylus. If the player needs to draw a anvil to crush an enemy, you can just draw the said item and watch it plummet to the ground. If a staircase is needed, the player can doodle up a staircase and safely jump up to progress through. There really is no limit on your own creations, but after a while you will quickly learn that creativity is not really necessary for the basics. There were several occasions where I would just scribble out a ball to bash a foe or simply make one line to create a ramp to move upwards or across a gap. You see, the game leaves your own creations up to you, so if you’re not willing to use your own imagination, the entire experience will be rather bland and get stale quickly.

Even though Max’s marker is magical, it still requires ink. After each checkpoint is reached, the player will have their pen drained and must gather up enough ink to properly complete an upcoming puzzle all over again. You would think having your ink taken away so often would be frustrating, but that’s actually where the true challenge and strategy of the game comes in. Later on, ink supply can become very limited and the player must conserve and constantly “erase” previous creations to keep their pen usable. With fewer lines and strokes able to be used, the game then requires conservation and more elaborate creativity to be successful. The puzzles also get more difficult and clever as you move on, which is where the game truly shines. For example, there are many areas with clouds that pour acid rain. To safely pass, you must draw a bubble around max and push your way through. Sometimes you might also need to hit a switch that is out of reach, so the player would then have to create a see-saw and drop a bit of weight onto one end to have the other end trigger the button. Yes, it’s nothing too complex, but there were still quite a few areas where I spent a good time just trying to figure out what to sketch up. Once you do find a solution however, seeing the result play out is always rewarding and that is one feeling that never gets old. 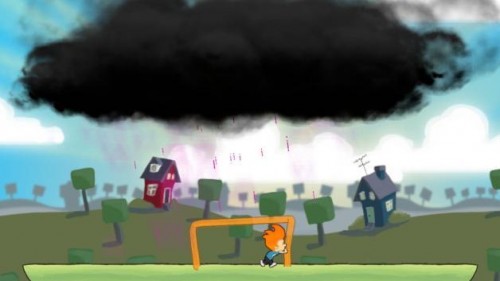 As solid as Max and the Magic Marker is control wise, there are still a few moments of frustration to be found. I had many times where I would get stuck under a see-saw and have to completely restart the level to continue. The actual response of the touch screen can also be hit and miss, with some drawings taking more than one try to properly place. A lot of these gripes don’t really effect the overall game, but having to replay a difficult level due to a bug can be a test of patience. When you finish traveling throughout the three worlds offered, there is a lot to keep you going back in as well such timed achievements, collectibles, and several hidden secrets.

Visuals/Audio
The graphics in Max in the Magic Marker are obviously the stand-out feature. Each backdrop, platform, and character within all boast a hand-drawn art style that does wonders to create a playful and light atmosphere. Animations are a bit more of a mixed bag though, as frame-rates are jumpy and seem to have gotten the shaft when Easy Interactive ported the game over to the Nintendo DS. I know Scribblenauts also had a few hiccups in this area, but other developers have proven that the DS can handle standard animation and whether it was intended or not, the sluggish animations can definitely lead to a bad first impression. Yes, you get used to it and it doesn’t really effect the gameplay, but considering the gimmick, Max a deserved better treatment. 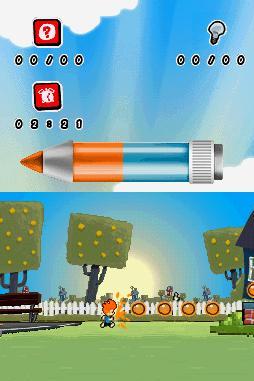 The soundtrack also is hit and miss. The main theme of the game is an absolute earworm that is catchy and pleasant to listen to as you complete the game in it’s entirety. The problem is however that there isn’t much variety. It’s that same tune nearly all the time, on a constant loop. Most enemies are very quiet as well, which makes them feel generic, even though they have an appealing design. Much like the visuals, just a little more time and love would have went miles into making the presentation and charms in the game greater, and it’s sad to see that not much attention was given in this area.

Overall
Max and the Magic Marker started off as a small game with big dreams over a year ago on the digital scene. Of course since then, we have seen the title tackle more platforms and Max himself escalate into a household name of sorts. As great as it is to see an IP grow, this port doesn’t really do much to separate itself from any other versions we have seen thus far. Those looking for a new way to play the game will fall in love with the more precise stylus controls and still get a lot out of the innovative mechanics offered, but the DS version feels almost like a downgrade in comparison due to the presentation of the overall package. If your a handheld guru and want to own Max and the Magic Marker for your dual-screened handheld, then by all means, pick this one up. If you own any of the other platforms that Max and the Magic Marker is available for however, you would do best to do your doodling in another manner for a fraction of the price.