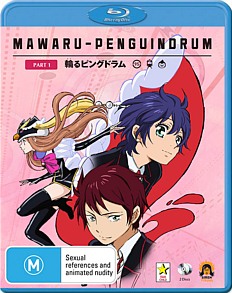 Overview
Imagine a story about a sick girl and the struggle of her two older brothers desperately trying to make her final months happy whilst keeping themselves together, now add magic and penguins. Welcome to Penguindrum. An odd little anime series that is a patchwork of the dark and sombre truth of loss and the shenanigans of magic penguins. 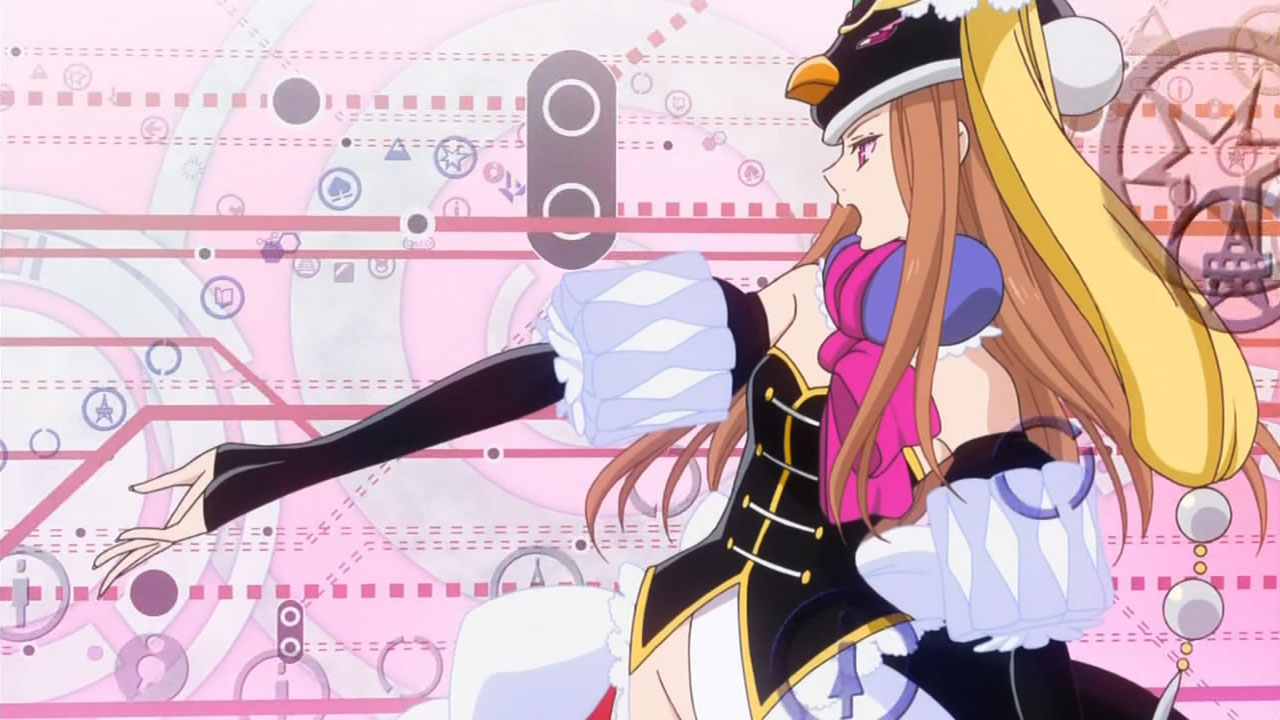 Story
Himari Takakura is a terminally ill girl. She lives with, and is cared for, by her two loving older brothers Kanba and Shoma. In the midst of school, chores and hospital visits, they do the best they can at being a family. On a trip to the aquarium, Himari succumbs to her illness and dies…Luckily for her the penguin hat her brother bought as a gift magically restores her to life. I know there was a little bit of mood whiplash there but to be honest it defines the series. Penguindrum is strange. One half quirky comedy about penguin themed magic, one half drama about loss and obsession.

The main plot point of the series is the Penguindrum itself, an object of vague description. The spirit residing in the penguin hat explains to Kanba and Shoma that they are to retrieve the Penguindrum and in return, she shall keep Himari alive. If they fail, she dies…again. The brothers naturally agree and attempt to figure out what and where the Penguindrum is. Also given to the Takakura siblings are three chibified penguins who, naturally, only they can see. Eventually (two episodes later) the spirit points them in the direction of Ringo Oginome, a girl said to know where the Penguindrum is. After this, Ringo pretty much becomes the focus of the show. Possessing said knowledge, the brothers have no choice but to stalk, talk and appease in order to retrieve it and save their sister. Unfortunately for them, Ringo is one twisted individual. Without spoiling too much, she’s a stalker. Madly in love with a teacher, she believes they are destined to be together. She believes that the writings in a diary are a prophecy of their courtship and she goes above and beyond to make them happen. 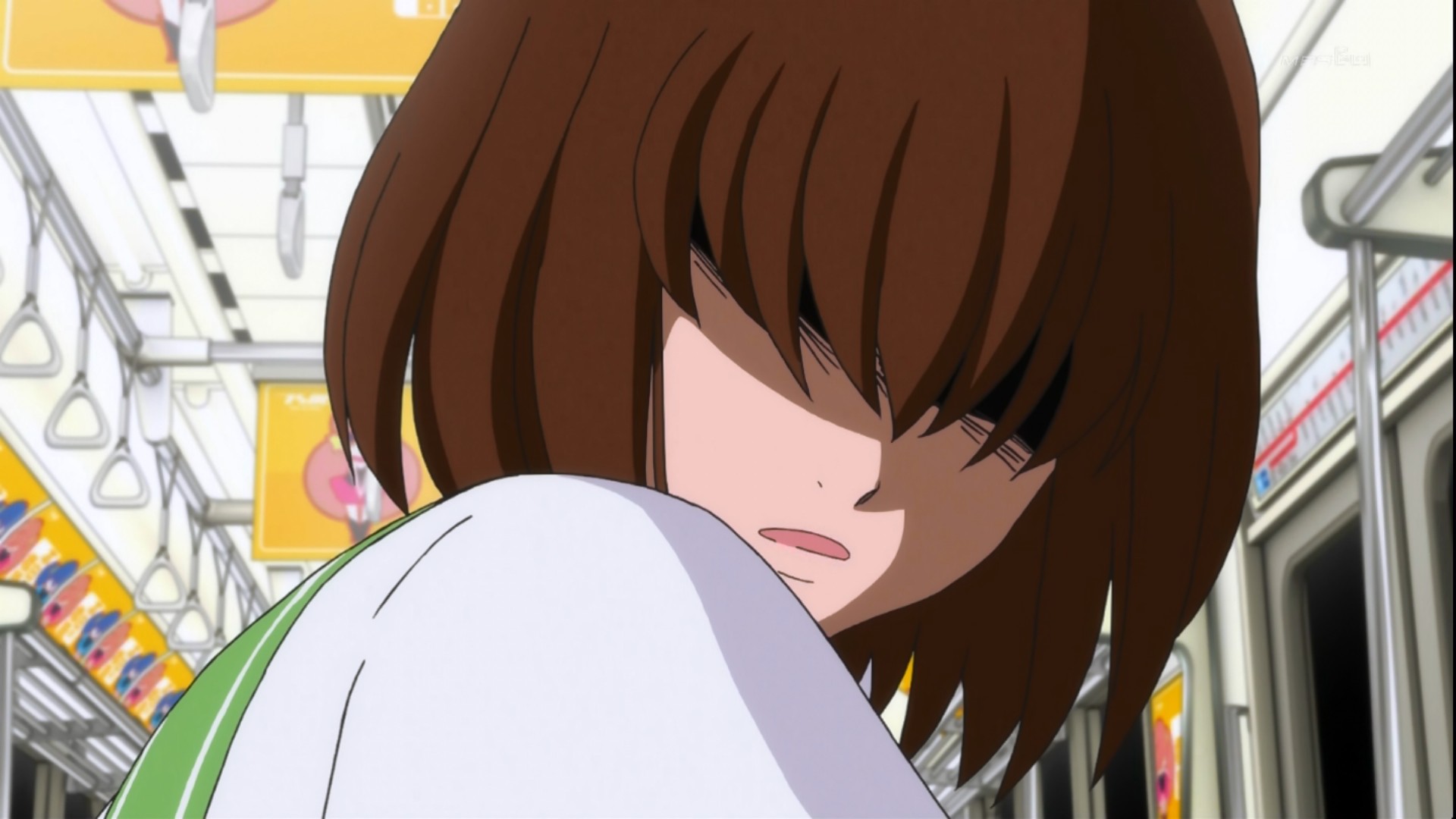 As the series progresses, more is revealed about each character. The Takakura’s past is slowly explored by flashbacks, literally labelled as such and preceded by subtitling defining the context. These often pertain to their parents or the earlier days of Himari’s diagnosis. Ringo’s past is also explored fairly deeply, shedding some light on her current mindset and her ultimate goal. Honestly, as the series progressed I came to feel sorry for Ringo. The context given by her past helped evolve her as a character, beyond crazy psychopath stalker girl…Though she still is that too.

Throughout Part I, a greater plot is hinted at and slowly furthered as the series moves forward. Characters and elements related to the strange going ons of the series are introduced and questions are raised regarding the importance of the Penguindrum to others, as well as what power it holds. 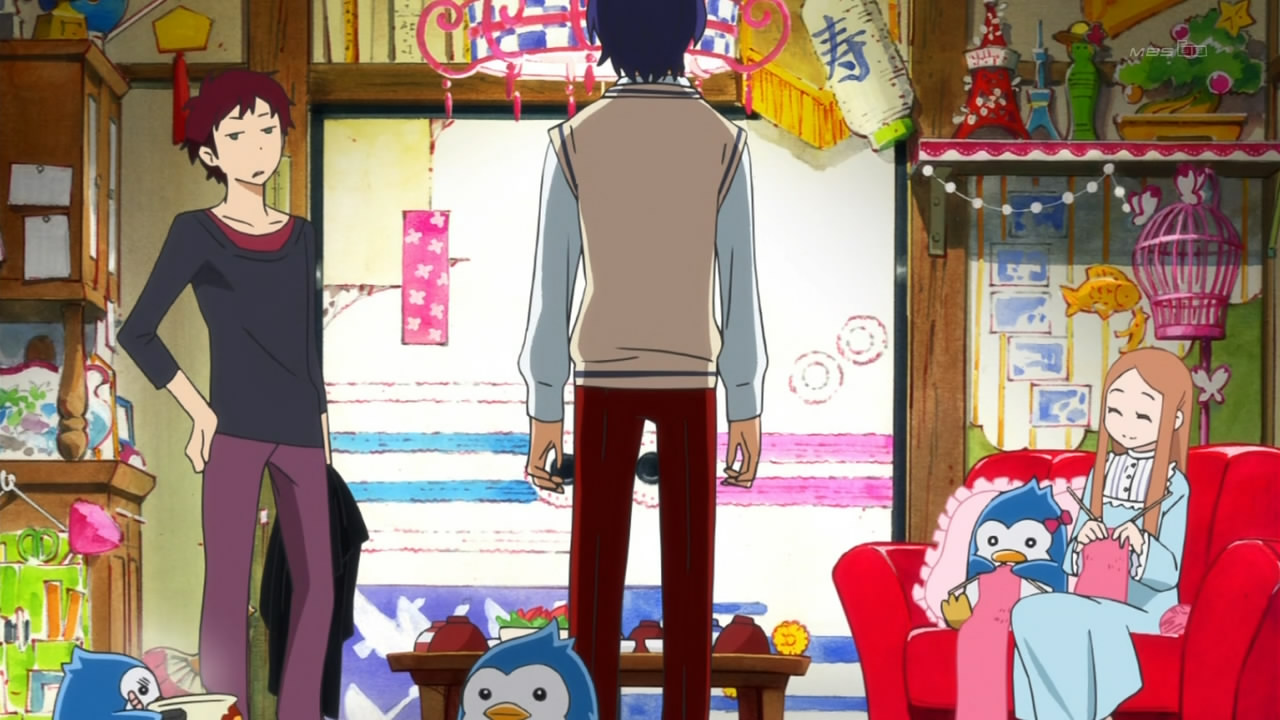 Welcome to the house that love built…and decorated

Visuals
The visuals would have to be one of the best thing about Penguindrum. If I had to pick one word to describe them, it would be vibrant. Every colour presented is very bright, especially in the “vision” sequences involving the hat spirit. Some characters possess very striking hair colours, such as Kanba and Shoma have oddly red and blue hair respectively. The animation itself is also done well, at points becoming oddly dramatic, with certain scenes being animated very fluidly. There are also certain artistic cutaways, often the musings of Ringo, which possess a style more akin to a painting or the dramatic clash scene of an anime battle. The illusion realm shown by the spirit is also very artistic. The intro sequence expressly presents the strange yet striking nature of the space, complete with CGI robotic bears a lot of random floating background objects. Though the scene does get repeated in its entirety more than a few times. Something of note is the background characters. Apart from the main cast, the streets are lined with people who take the form of the male and female figures from a bathroom door and essentially glide through the background. Specific choice or lack of funds, it certainly adds to the quirky feel of the series. 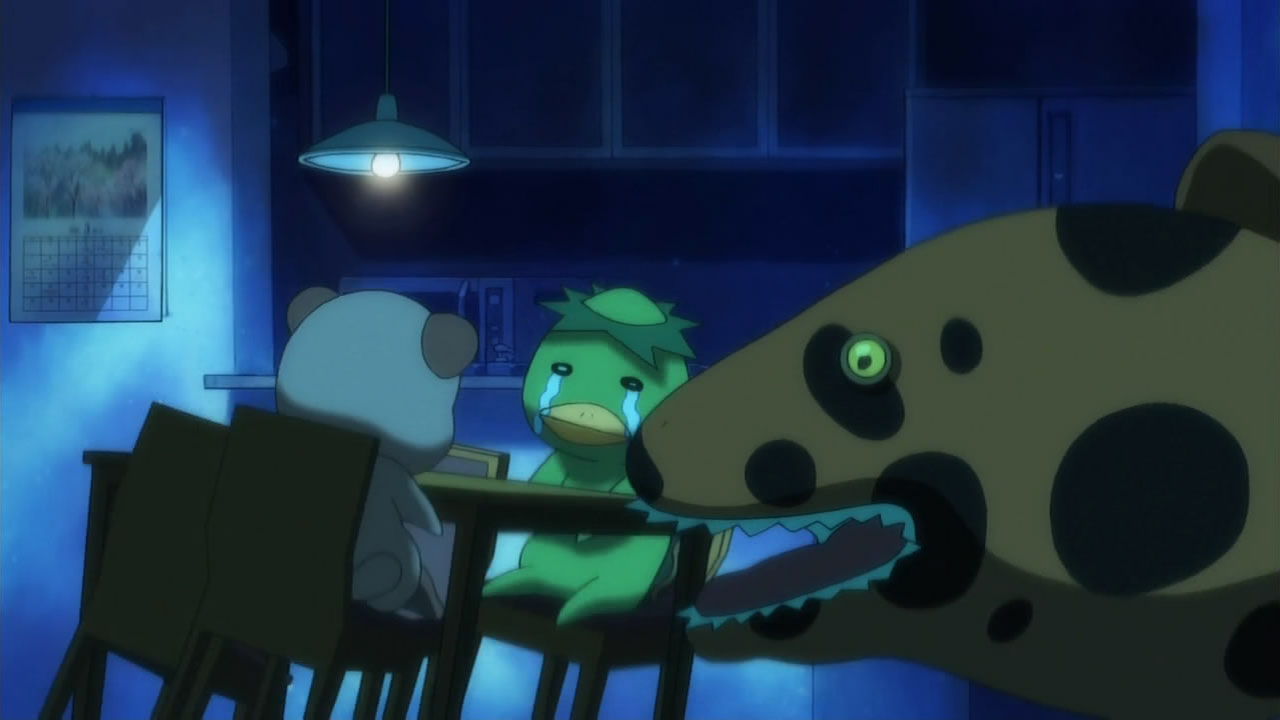 It makes sense in context

Audio
The soundtrack suited the series very well. Background songs were generally relevant to the specific scene being played or the larger episode plot, adding to the moment and enhancing the emotion. These insert songs were also often covers, being sung instead by the voice actors of an in-universe band. This adds a sense of believability and inclusiveness to the songs, seemingly coming from the Penguindrum universe. The songs are often actually being played via a radio or television within the show, further linking the music to the moment. Also notable is the song which plays in the intro to the illusion world. The song connects to the more light-heated side of the series and expresses the more quirky side. The opening and ending themes also feature a mix of both themes, possessing a pop style yet somewhat dark and sombre lyrics.

The English dub of Penguindrum was done fairly well. Though by no means terrible, there is a lot to be left desired. Characters tend to fall into the realm of under emoting when they speak, which kind of takes away from the moment. They fall somewhere between the spectrum of the hat spirit, one of the best voices in the show, and the Takakura siblings’ father, who reacted to the birth of his child with dull surprise. 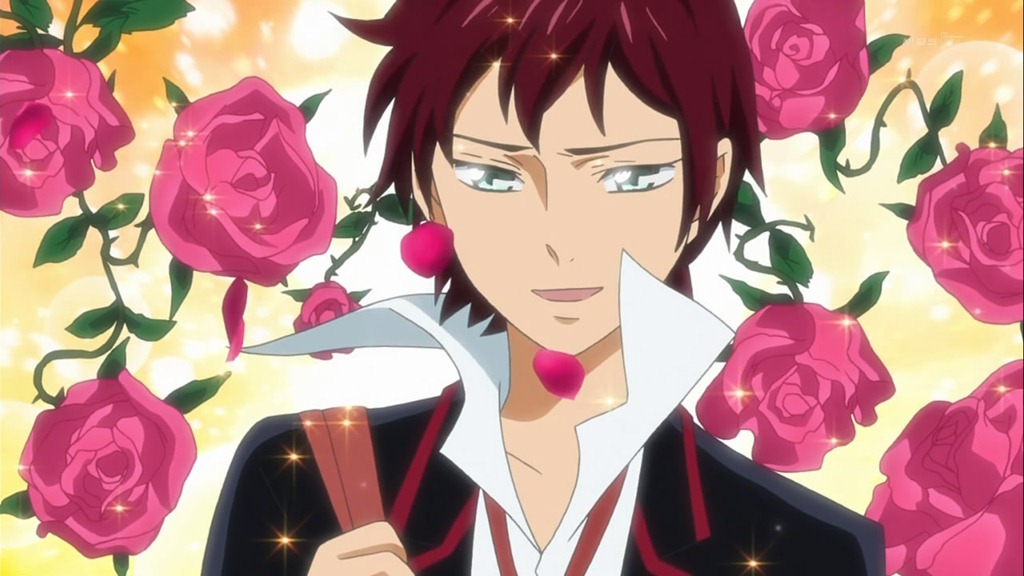 Overall
Penguindrum is an odd series to define. On one hand its a dark exploration of the impacts that loss and obsession have on people, and on the other…penguins. Though it begins to focus more on the darker side, the quirkiness tends to draw away from the drama the series attempts to create. The most powerful scenes of Penguindrum include no penguins at all, usually those focusing on the truth behind Ringo. Penguindrum seems to fall into the realm of a conversational anime series. Better in hindsight and more interesting when explaining it to another. In all honesty though, it left me wanting to see what happens, hoping that the larger plot will kick in and explain some things. I feel that the series would have been stronger if it had of been either completely about the drama or the comedy, rather than a mix of both as each seems to weaken the impact of the other. Chances are you’ll like at least on half of the series, though the other half will probably limit how much you enjoy it. Regardless, Penguindrum is definitely a unique experience.