It is no small secret to the gaming community that one of the best ways to help the promotion of a particular title is to supplement the release with a variety of additional products and peripherals. Regardless of whether these products are made of functionality or aesthetic appeasement, as long as they are flaunting the colours or symbols of a particular video game franchise, gamers WILL take notice. So naturally, as one of the biggest and most critically acclaimed titles of 2012, Mass Effect 3 has experienced no shortage of attention when it comes to gaming add-ons for the modern PC gamer.

Razer, one of the largest and most reputable brands in the gaming accessory market currently has a small collection of much ME3 branded products that are soon to be released to Australian retailers. We were fortunate enough to get our hands on several pieces of this collection early, specifically the Razer Chimera headset, the Razer Imperator mouse, the Razer BlackWidow Ultimate Keyboard and finally, the Razer Vespula mouse pad. Click on the afore mentioned links to read our other reviews of these products. 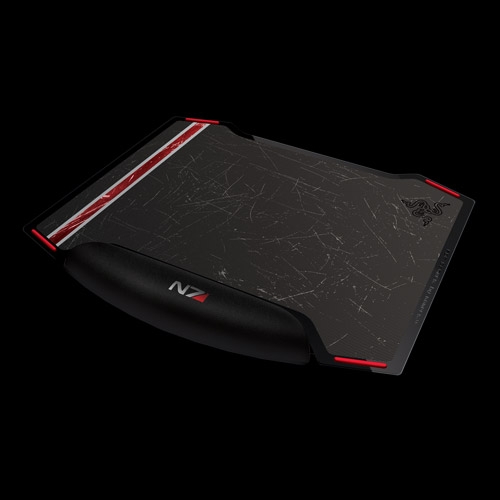 The Razer Vespula mouse pad jumps out immediately as an aesthetically appealing piece of hardware. It is an add-on that many will not deem necessary to alter gameplay, but appeals due to the visual design and the player being part of a wide reaching fanbase. Odds are that many gamers who take a look at a product like this at face value will assume that the appeal is in looks and looks alone. And while it can’t be argued that the mouse pad has a very cool visual design, there are other features that I just can help but find appealing as a Mass Effect fan.

The Razer Vespula has been branded with the familiar ‘N7’ symbol, which for all intents and purposes serves as the trademark sign of a Mass Effect related product. The use of the ‘N7’ symbol, which represents the elite soldier program in the ME universe highlights that the design of the mouse pad has clearly been fashioned with Commander Shepard in mind. In addition to the symbol, the dark colour and material weave visual are quite reminiscent of Shepard’s amour. Coloured primarily a dark grey with a black finish and complimented by a red military stripe, I couldn’t help but be reminded not so much of Shepard alone, but also of Legion and the piece of N7 armour grafted onto his arm. 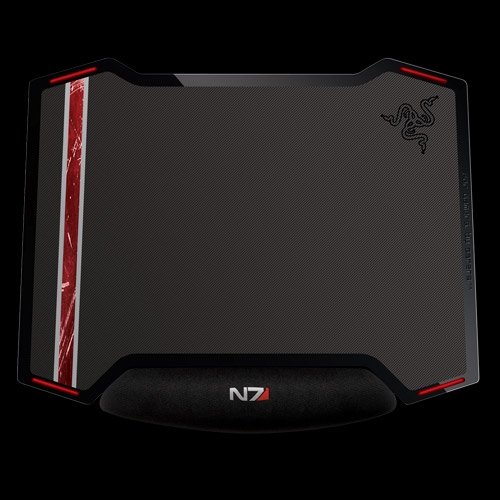 It is the small design touches like this that shows that the hardware designers really care about the intellectual property they’re handling. This is often what makes the subtle difference between ad-on products that do appeal, and those that don’t. If hardware designers rush out a product without too much thought given to the story, characters, universe, visuals and the game itself, then the product itself will reflect this. If it is sapped of any strong relation to the game, then players are not going to be drawn in to buying it as it would not offer something that the fandom can relate to. Thankfully, Razer has had plenty of practice in designing peripheral products in the past, and products like the Vespula reflect the fact that the designers really know what they are doing with the creation process and are passionate not only about their work, but their games.

In a similar regard to the mouse pad’s red stripe, the ME3 Vespula also boasts a dual sided design, allowing the player to flip and easily change the upward facing design of to one of their preference. The mouse pad itself is consisted of two separate pieces: the soft under-layer attached to the wrist rest; and the solid over-layer, which houses the interchangeable faceplate. The contrast between the two designs is quite striking. While the basic face up design appears like a relatively undamaged and clean piece of N7 armour, the flip side is identical in base design, but is completely covered with white scratches and impact marks. Because the tarnished faceplate is the one that is side up when the box is opened, it really hammers home the notion of destruction, which ties in very cleverly with the plot and tagline of ME3: “Take Earth Back”. 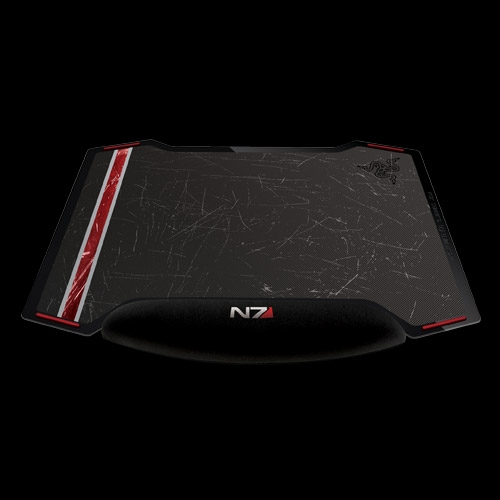 At this point it should be mentioned that the ME3 Vespula mouse pad is more than just a branded product with aesthetic value. The mouse also features a functional element, one which can directly influence gameplay flow. Of course, the surface of the mouse pad is sleek and solid, providing a wide range of motion for the hand and a clean, crisp sound to compliment mouse movement. However, the real benefits are to be found in the wrist rest and the interchangeable faceplate materials.

The soft wrist rest is located at the base of the moue pad. This feature allows for the player to rest their mouse arm comfortably for extended periods of play. When a game is as addictive as Mass Effect 3’s multiplayer, little features like this can make a big difference to personal comfort. A subtle benefit, but worthwhile. The Second functional benefit can be found if you were to look closely at the two different faceplates of the mouse pad. Dubbed separately the untarnished “speed surface” and the seemingly battle worn “control surface” the two faceplates have a distinctly different feel about them. If one were to look closely, the material composition of the two sides are different, with the battle-worn control side offering a little more resistance and friction with mouse movement. For anyone thinking of purchasing one of these for themselves, it’s definitely worth experimenting with both sides to find the one you prefer to play with. And while the placement of the faceplates on the soft under-surface does not make changing the faceplates a quick process, this is a minor compliant in comparison, and one which can be easily overlooked. 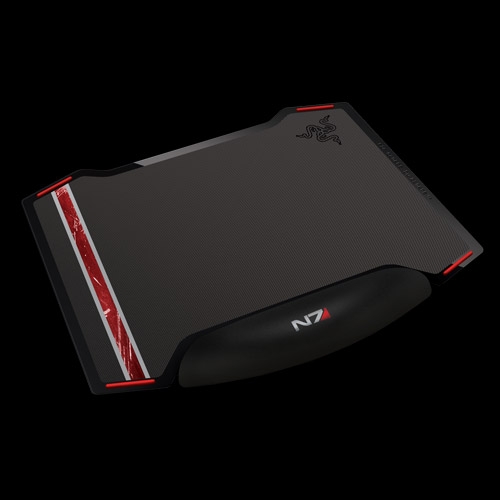 It is also worth noting that, like the other Razer products in this Mass Effect 3 series, the Vespula also comes with a Collector rifle DLC code and multiplayer equipment packs. For those that like these sorts of freebies. Which is effectively EVERYONE.

Overall, the appeal of something like the Mass Effect Razer Vespula will come down to the individual player. For all the functional benefits that it offers, most are liable to observe only at a face value when looking at it in a shop window. From me, it comes recommended for any Mass Effect fan, but ultimately it depends on how deep your fandom runs. If this is your first time playing a Mass Effect game or any kind of Bioware title, then odds are that the mouse pad won’t appeal too greatly, and you have some MASSIVE catching up to do on some quality gaming. But for those of us who have shaped Shepard’s exploits from the beginning, reloaded save files to ensure 100% survival on the suicide mission and those who have spent several minutes witnessing the back and forth conversation of “Shepard.”, “Wrex.” in-game, then this mouse pad is for you.