Mass Effect 3 is the latest installment in the main Mass Effect trilogy of games. It follows the final journey of Commander Shepard across the galaxy in a battle against a bio-mechanical race known as the Reapers. In this battle, players are needed to be at their very best and can not be limited by their own equipment. So Razer have come in as assistance to the players needs by creating a product line built to enhance the Mass Effect experience and to ensure that players are at the very best that they can be.

Keyboards have been in use for the longest of periods as the primary input mechanism for computational devices in use by the average user, so it is only natural that the average user should want the best input device for their purposes. The Razer ME3 Blackwidow Ultimate Keyboard is designed for users whose primary motivation for owning a superior PC is for gaming purposes. This is to say that the people who will be most interested in this keyboard will be people who play video games on their Personal Computers. The gamer who is likely to get the most out of owning this particular edition of the Blackwidow Ultimate keyboard is the gamer that is the biggest fan of the Mass Effect series and also takes other games pretty seriously. 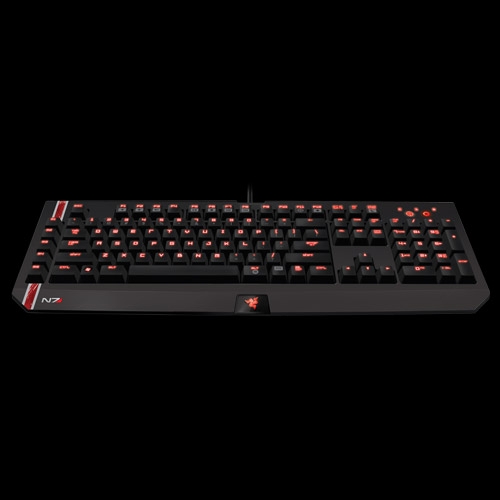 The Razer ME3 Blackwidow Ultimate Keyboard is ultimately a mechanical keyboard at heart, with several additions that make it incredibly appealing to the modern gamer. The first of these additions I want to talk about is the back lighting. The keyboard comes equipped with several back lighting features and options that are easily switched between from the keyboard itself. There are five back light modes for users to switch between, which are – no light, low light, medium light, high light and pulsating light. You can change between these modes by hitting the ‘Fn’ key and the sunny symbol (F12) at any time. What I found particularly awesome about the back lighting was that it comes from LEDs inside of each key, which makes each letter stand out in a bright red colour, reminiscent of the Mass Effect games.

My favourite lighting mode is the high light mode, the low light just seems way too dull and the pulsating makes it hard to type in the dark. I suppose that opinions will be different to my own, and that users should definitely fiddle with their keyboards and find the mode that suits them the best. And really, that’s what makes this keyboard awesome, it gives you the option to choose how you want to have it appear. It’s far better than forcing you to have just one option, even if it’s ugly as crap. 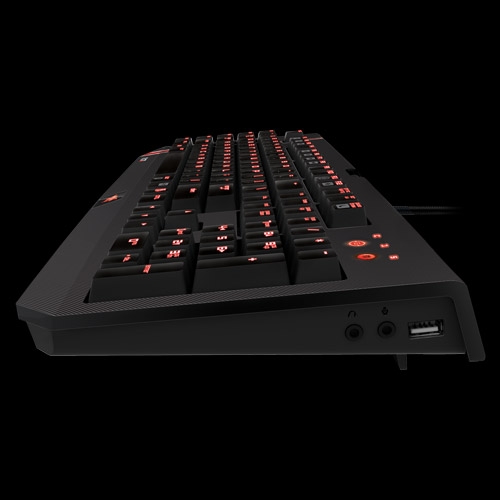 The second part of the keyboard I would like to mention is the Macro functionality of the keyboard. Lined along the left-hand side of the keyboard are 5 macro keys, each one labelled from ‘M1’ to ‘M5’ in a descending order from the top, or an ascending order from the bottom. Recording macros is an easy enough function, you simply hit the ‘fn’ key along side the ‘m’ (alt) key and then record your macro. Pressing  the same combination will stop recording and you then assign the macro to a key of your choosing. You can do this to any key on the keyboard, but I’d seriously not recommend doing this as it can become problematic. Assign the macros to the macro buttons.

The function key is probably the most important key on the keyboard. It is this key that allows you to access all of the alternate functions of the keyboard. I’ve already spoken about the lighting and the macros, but I have yet to touch upon the rest of the functions accessible by holding this key. The next function I want to talk about are the sound options. The F1-F3 keys control the volume of the computer whilst the ‘fn’ key is depressed. Pressing F1 will mute all sound from your PC, while F2 and F3 will decrease and increase your volume levels with each respective key. I found these to be particularly handy while playing some games and watching movies. I don’t why, but the gaming industry is moving towards a more cinematic sound experience, rather than a logical one, so a lot of games have incredibly soft audio levels so that you have to turn your sound levels even higher just to be able to hear anything. Skyrim is one of the biggest examples of this. 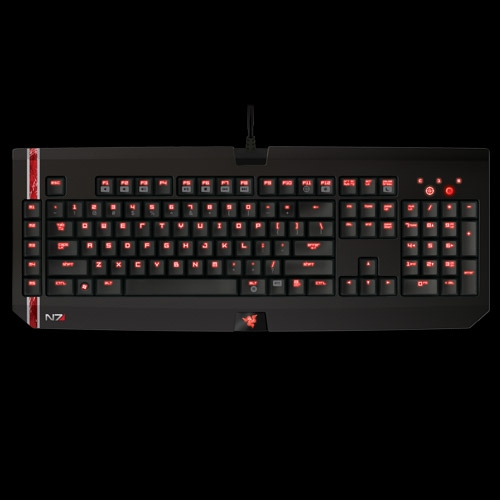 The keyboard also has media functionality so that you are able to quickly access your multimedia programs while you are gaming. You have four options at your disposal, each one assigned to the F5-F8 keys, and they are: Play/Pause, Stop, Skip-Backwards and Skip-Forwards. I quite liked having this option as I like to play games while listening to my own music, rather than the games audio, so being able to manage these things without alt-tabbing is a great addition. However I did find a problem where sometimes programs like Windows Media Player decide to freeze when skipping songs, however this is rare and is probably a problem with the way WMP handles media functions.

One of the most useful functions of this keyboard is the ability to switch off the Windows Key functionality. How many times have you been in a moment where it was critical that you do something at just the right moment in order to brush your way to victory and then slap your mates in the face with your superior gaming skills, only to have accidentally hit the Windows Key on your way to the right key, or with your palm, thus destroying your victory and making you look like a massive n00b in front of everyone? Now you have no reason to fear such an occurrence for with the ‘fn’ key and the F11 button you enter the keyboard into gaming mode, a mode that is surely to be useful under many a circumstance. What is also useful is that whenever you want the Windows key to be useable again, you can just use the same combination to switch the Keyboard back to normal. 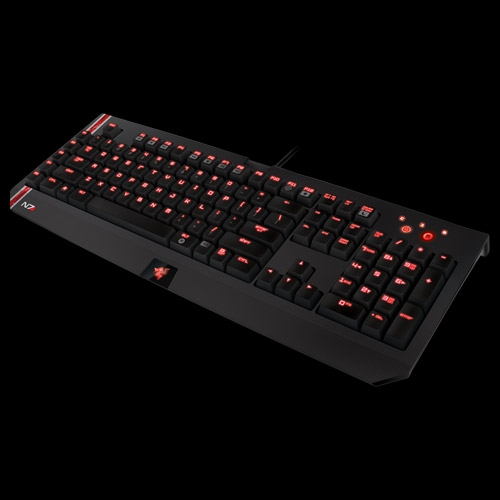 Keyboards are personal to the person using them and, well, what makes this Razer Mass Effect 3 Blackwidow Ultimate Keyboard stand-out and become something that people would want to be personal to them? To be honest, sure it might be all the features that I have listed already, but I think it’s got more to do with the little quirks of a device that are something that make it stand above devices with a similar offering. For me, the main selling point of this keyboard was the way that it gives a satisfying click every time you hit a key, so that you definitely feel as though you’re typing and doing something great with the keyboard. Having that feedback, for me, made the experience with this keyboard absolutely amazing. I mean sure, a lot of keyboards click when typing, but coming from a keyboard without that satisfying click, it feels like something awesome has typed its way back into my life.

Each key on the keyboard has a kind of finish that makes each key feel much different to any other keyboard on the market. They are quite comfortable to hit with your fingers as you type and aren’t prone to stainage, which is a pretty good thing, considering some keyboards can look pretty grimy after a few days of use. Even more awesome is that the lettering doesn’t rub off the keyboard as you use it, this is primarily because the lettering is LED back lighted and therefore much more resilient to that kind of abuse. 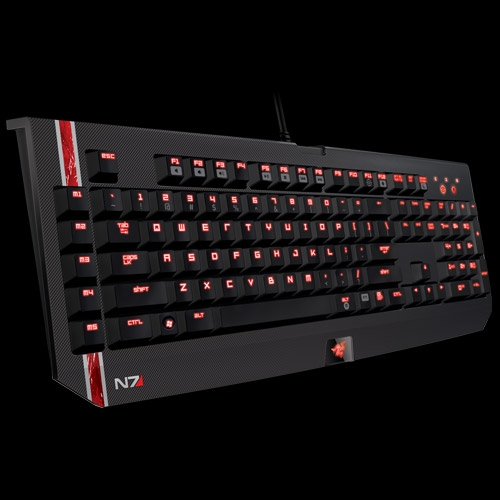 The most Mass Effect part of this keyboard, isn’t so much that it has much Mass, and Effects, but that it is Mass Effect themed. Adorning the bottom left corner of the Keyboard is the N7 logo, which is now synonymous with the Mass Effect brand and flying down across the Macro keys is the Mass Effect white and red strips that are also recognisable within the Mass Effect brand. What will make this package even more enticing is the limited edition code that unlocks new weapons and features in the Multiplayer portion of the Mass Effect 3 game. Mass Effect fans will love this.

Now the part you’ve all been waiting for, how it performs while gaming. I’m not going to exaggerate and say that my gaming skills increased by godly amounts while gaming, but the keyboards higher reaction times and LED lighting made it much easier to play games that it was previously. I noticed a slight increase in my movement (not movement speed) which made dodging incoming projectiles that much easier and responsive.

I would heavily advise any gamer that does not yet have a decent gaming keyboard to purchase this keyboard immediately, or at least, as soon as possible. This is only because unlike Mass Effect 3’s ending, this keyboard is actually good.