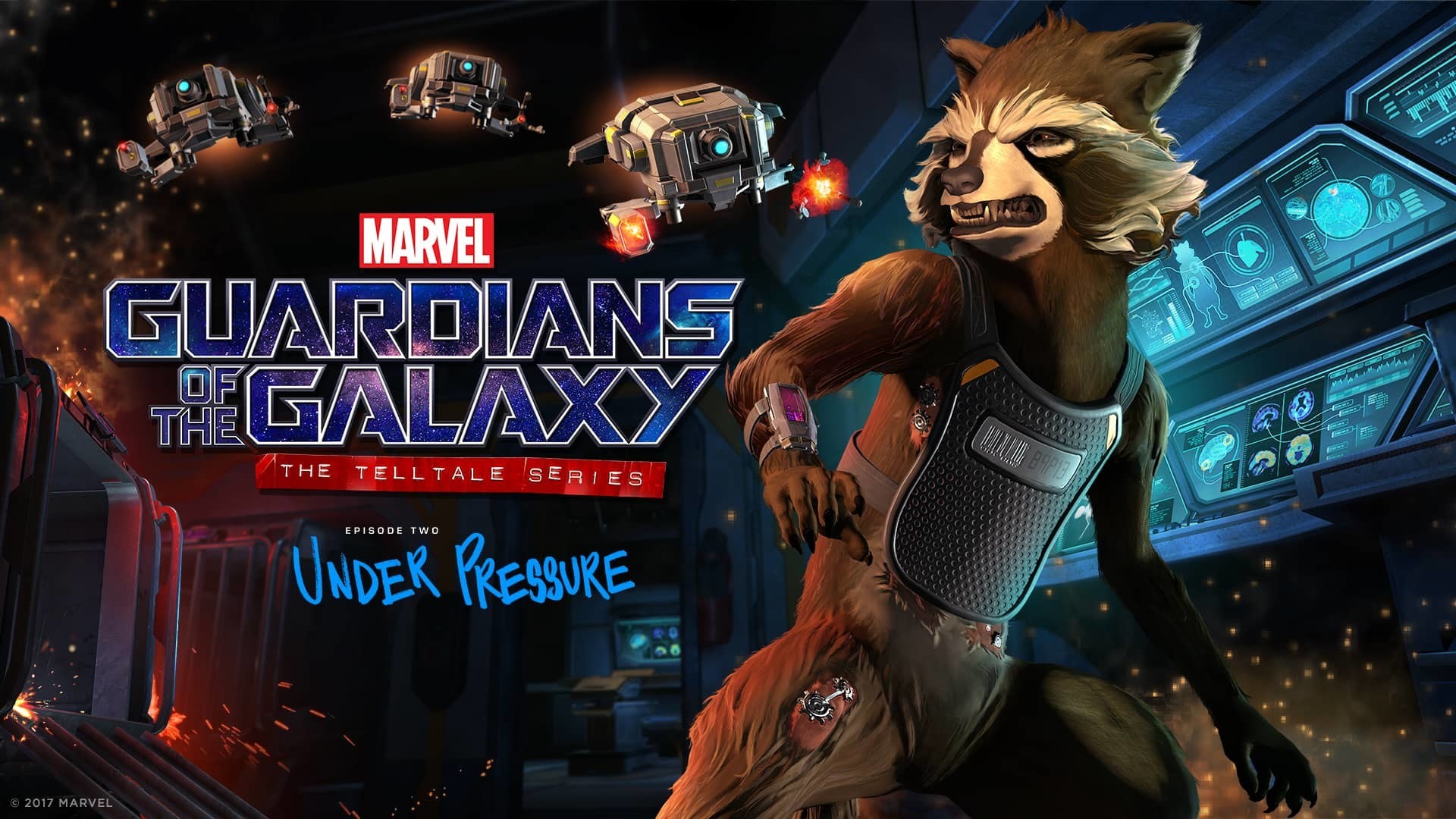 Marvel’s Guardians of the Galaxy: The Telltale Series: Under Pressure

With fans of Guardians of the Galaxy fresh from the theaters of the second film, Telltale Games isn’t about to let some great timing pass by taking too long with a second episode for the series. After successfully kicking off the episodic journey in Tangled Up in Blue, how do they follow up in the second episode of Marvel’s Guardians of the Galaxy: The Telltale Series, Under Pressure?

Although we will avoid discussing major events that take place in this second episode, it is highly recommended that readers play through the first episode before continuing to read this review as various events will be discussed from that episode that will spoil certain twists.

When we last were with the Guardians they had managed to put down the biggest threat to the galaxy and obtained a strange relic known as the Eternity Forge. They had little time to celebrate their victory as a new villain was quick to pursue the group with their eyes set on the Forge and it doesn’t take long to see why. Not only is this relic capable of revisiting the memories of the one holding it but it also is capable of resurrecting the dead as we see Peter come away from a mortal wound with just a torn shirt in the end.

With the Eternity Forge serving as such an unknown but incredibly powerful object and the likes of Hala the Accuser chasing them down, the Guardians must try to work together as much as possible while trying to uncover the secrets of this newfound relic. What makes this story interesting is the fact that the journey for the relic’s origins serves not only as a solid point in its own right but the way that the writers have handled the characters in this series.

As we’ve seen in the previous episode, despite being a tightly knit group that can be called a family at times, the Guardians are always bickering with one another and constantly tease breaking up anytime someone gets on another’s nerves. The balancing act players will have to do with their crew remains the same as before as most of the time they will introduce various choices that will anger at least one of the group. This feeling continues into this episode only this time rather than focusing on a little bit of everyone, the spotlight is mostly focused on the origins of Rocket Raccoon with other group interactions serving as something similar to teasers that will likely come to a head later on.

Regardless of a seemingly big decision that players make during this episode players will follow Rocket as he goes on a journey that presents to us his backstory and how he transformed into the hyper-intelligent and sharp-witted mammal that fans have come to love. The writers have managed to put together a satisfying flashback here that not only gives fans plenty of information about Rocket’s past but it also explores a more emotional side of the character that we rarely get to see.

Outside of Rocket’s spotlight the core storyline continues to move forward a fairly slow pace though we do see some small developments here and there. This includes the appearance of a couple of familiar faces who interact with the crew as they try to uncover the secrets of the Eternity Forge and leave players eager to see what will happen next, especially with the way things leave off and the rather unique way of presenting previews this time around.

Telltale Games seems to have found an enjoyable balance between lengthy dialogue sequences, quicktime based battle scenes, and exploration in Under Pressure. Rarely will any of these single segments feel as if they are running on too long and help keep the relatively standard length episode moving forward at a brisk pace.

Speaking of action sequences, players will find that the developers are continuing to deliver plenty of fast-paced battles that are not only a joy to look at but also are accompanied by some great music most of the time. While a few events may be a bit simple, there are quite a few variants in combat already thanks to certain branching choices you made during the previous episode as well as this one. Even the various environments you visit this time around, including a little quirk you’ll notice in a familiar face’s home, are well varied and interesting to explore.

As mentioned before, the soundtrack is filled with satisfying classic rock though this time around a few of the tunes may be a bit unfamiliar to some at first listen. Alongside this music  track the voice work continues to be very impressive with the voice actor for Rocket really knocking it out of the park during his backstory segment.

Although Telltale does step on the brakes a bit to slow down the plot progression, Under Pressure still gives us plenty of interesting action sequences and focuses heavily on developing the characters as well as the relationships between them, as tense as they remain to be, during these slower moments. Marvel’s Guardians of the Galaxy: The Telltale Series continues to impress, especially with the way that the writers handle the characters, leaving the slower core story something easy to forgive in favor of focusing on the Guardians and their interactions with one another.

By focusing heavily on developing Rocket and presenting us plenty of great character moments Under Pressure makes up for its slower story pace with ease and offers an intriguing storyline that we can’t wait to continue.
8