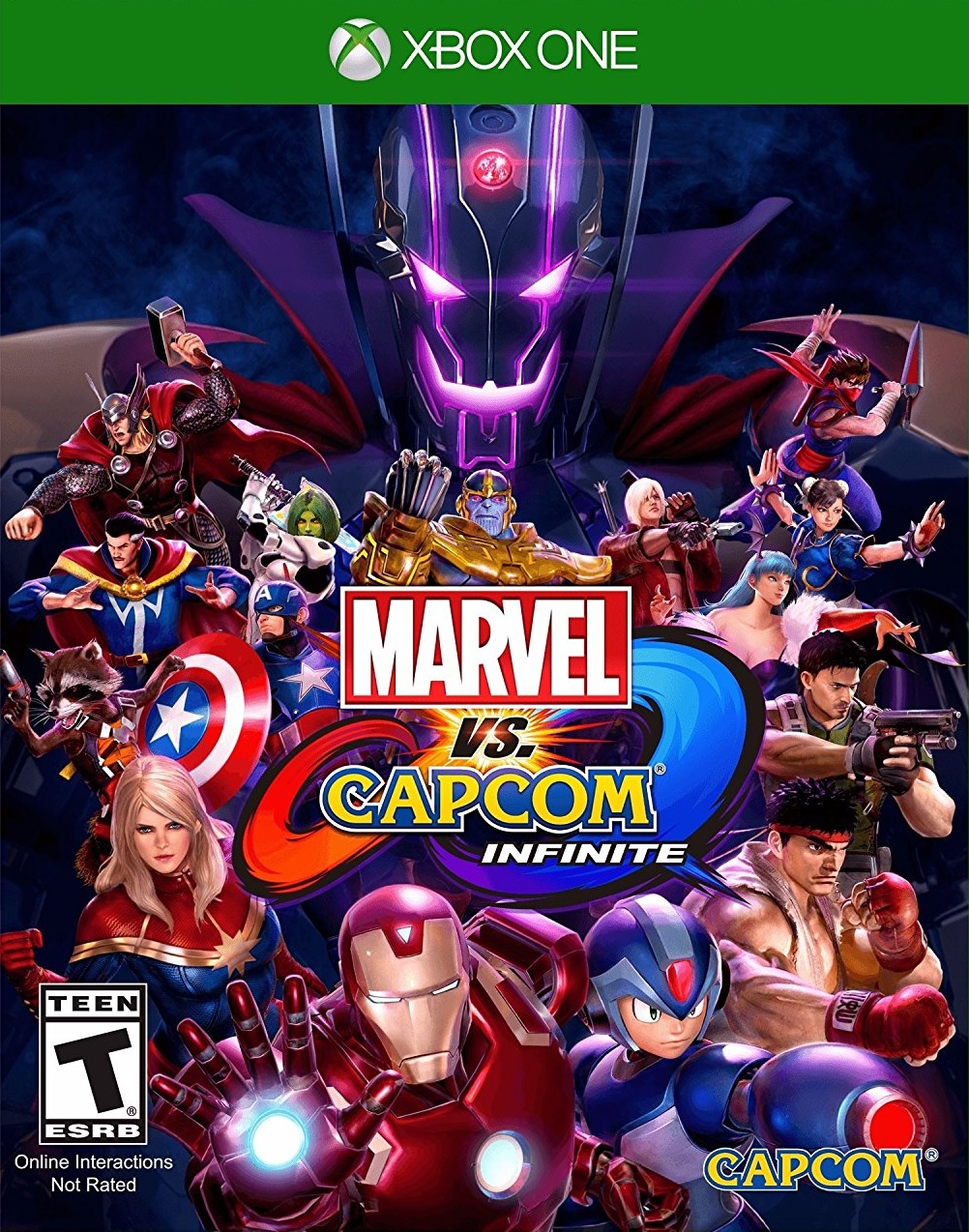 Most video game crossovers tend to rely on combining characters that are owned by a specific company with very few titles taking the risk of bringing in a completely different company in an attempt to blend their characters together. One crossover that manages to do this quite successfully happens to be Marvel vs. Capcom and after some time the franchise has returned for its twentieth anniversary with Marvel vs. Capcom: Infinite. With Capcom trying out a few new things with this entry, should fans look forward to picking this one up?

Fans of both Marvel as well as Capcom’s various series will be happy to hear that there is a story mode available in this game and although it only lasts a few hours, it does serve to explain, at least a bit, about how these two worlds have merged and why certain characters have ended up where they are. Despite an incredibly rough opening chapter the story does grow into something that fans will get a kick out of thanks in part to Frank West and other more comedic characters as they make various quips about their situation. 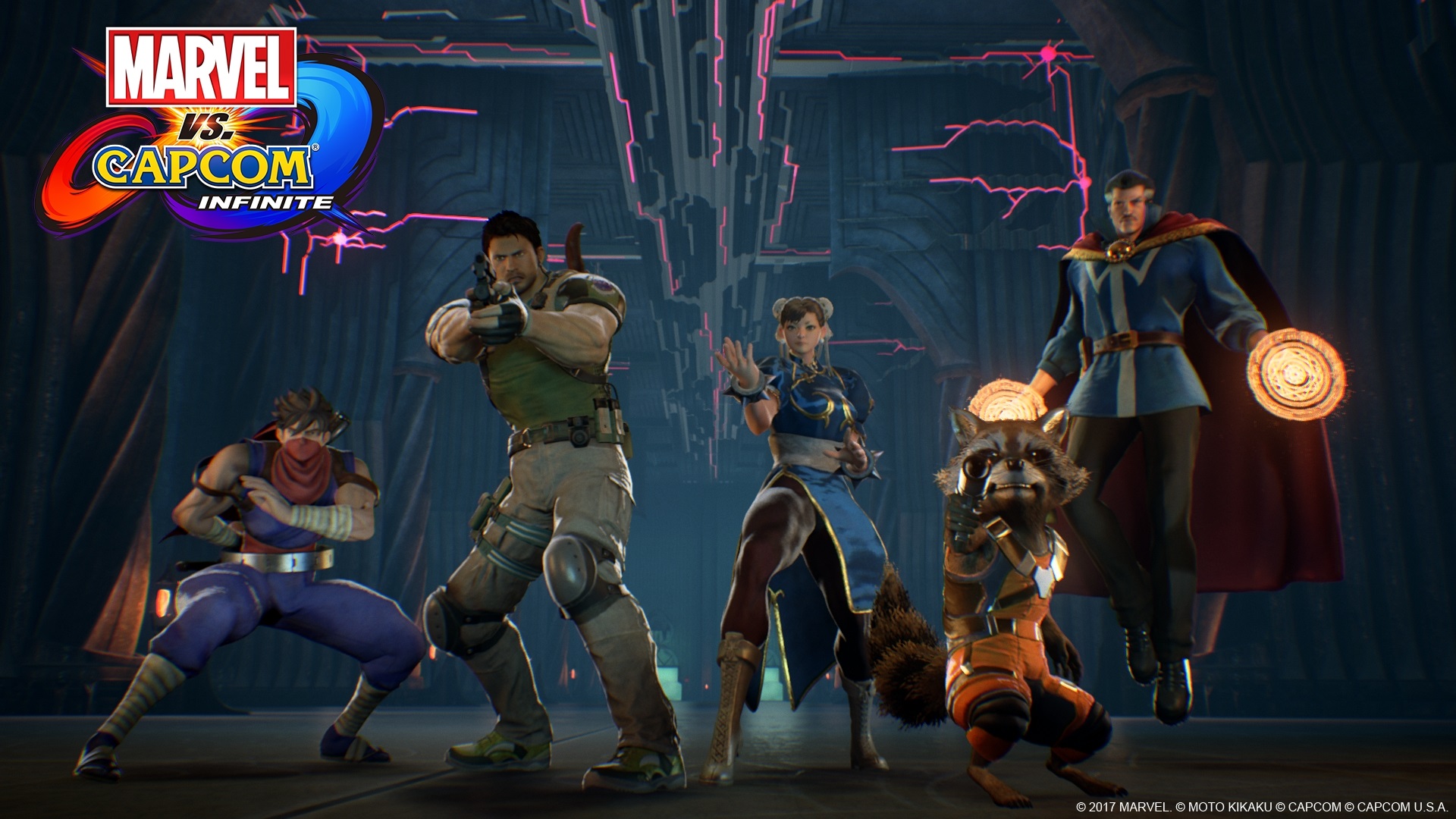 That being said, not only does the story resolve poorly but the potential for character interaction is barely tapped, meaning those who are expecting some unique character pairings will end up being disappointed, especially since far too many fights involve faceless drones. In fact, despite Marvel vs. Capcom: Infinite featuring an arcade mode the company has decided to completely avoid giving even the slightest bit of extra story here as there are not even ending cards offered for the characters used to complete the mode as in previous entries.

One of the first things that players will notice is that Marvel vs. Capcom: Infinite has dropped the three character teams as well as some of the other mechanics that players are familiar with such as Assists that allow your allies to provide a wide-range of moves on a cooldown. Instead the teams are limited to only two characters but now players will be able to select one of six Infinity Stones to bring with them into a fight. 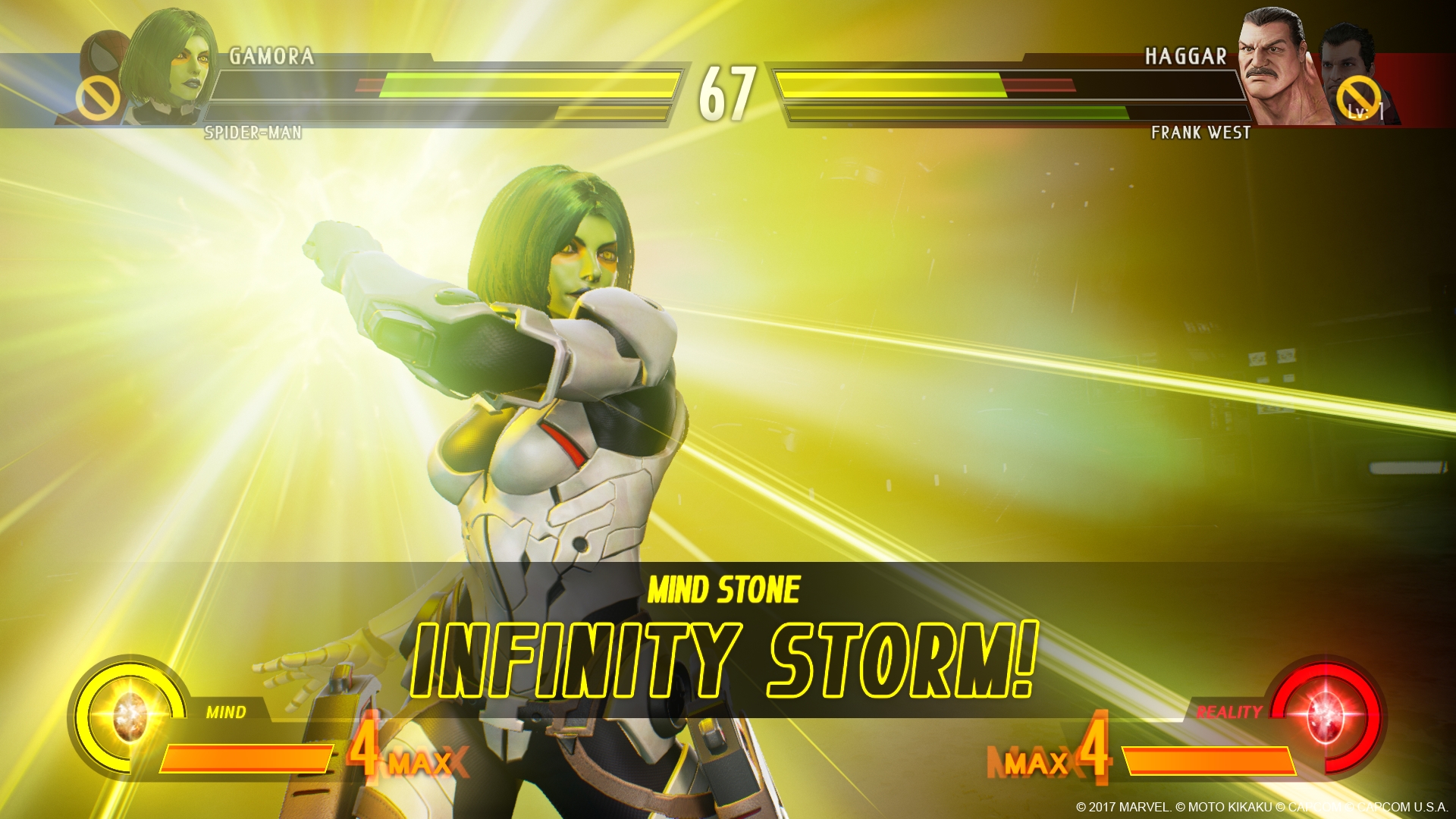 Each of these Infinity Stones provides players with two new abilities that can be used during a fight and add an extra layer of strategy to help out your team. Each stone has its own unique power such as the Time Stone being used either to close a distance quickly or perform a quick crossup as its “Infinity Surge” ability and giving your characters a massive speed boost when your infinity gauge fills up, allowing the use of an “Infinity Storm.” Each stone has abilities such as this, with the Mind stone refilling your Hyper Combo meter and allowing a stunning grab, Soul Stone reviving a downed team member, and more. This type of experimentation can create some unique combinations and adds extra depth to character selection. That being said, each stone has weaknesses of its own so players shouldn’t find it too frustrating when it comes to finding ways to counter their usage.

As for the whole dropping of assists, players will now have the ability to trigger “Active Switches” that allow for your partner to be swapped in immediately even while you are still in the middle of a combo, regardless if you are in the air or even performing a Hyper Combo. This means you can easily chain together some exciting looking combo attacks and, if you have the meter for it, unleash a devastating storm of Hyper Combos. This allows for team compositions that would otherwise be thought completely weak being able to chain together unique combos that make them more than worthwhile in the long run, rewarding players for experimenting. 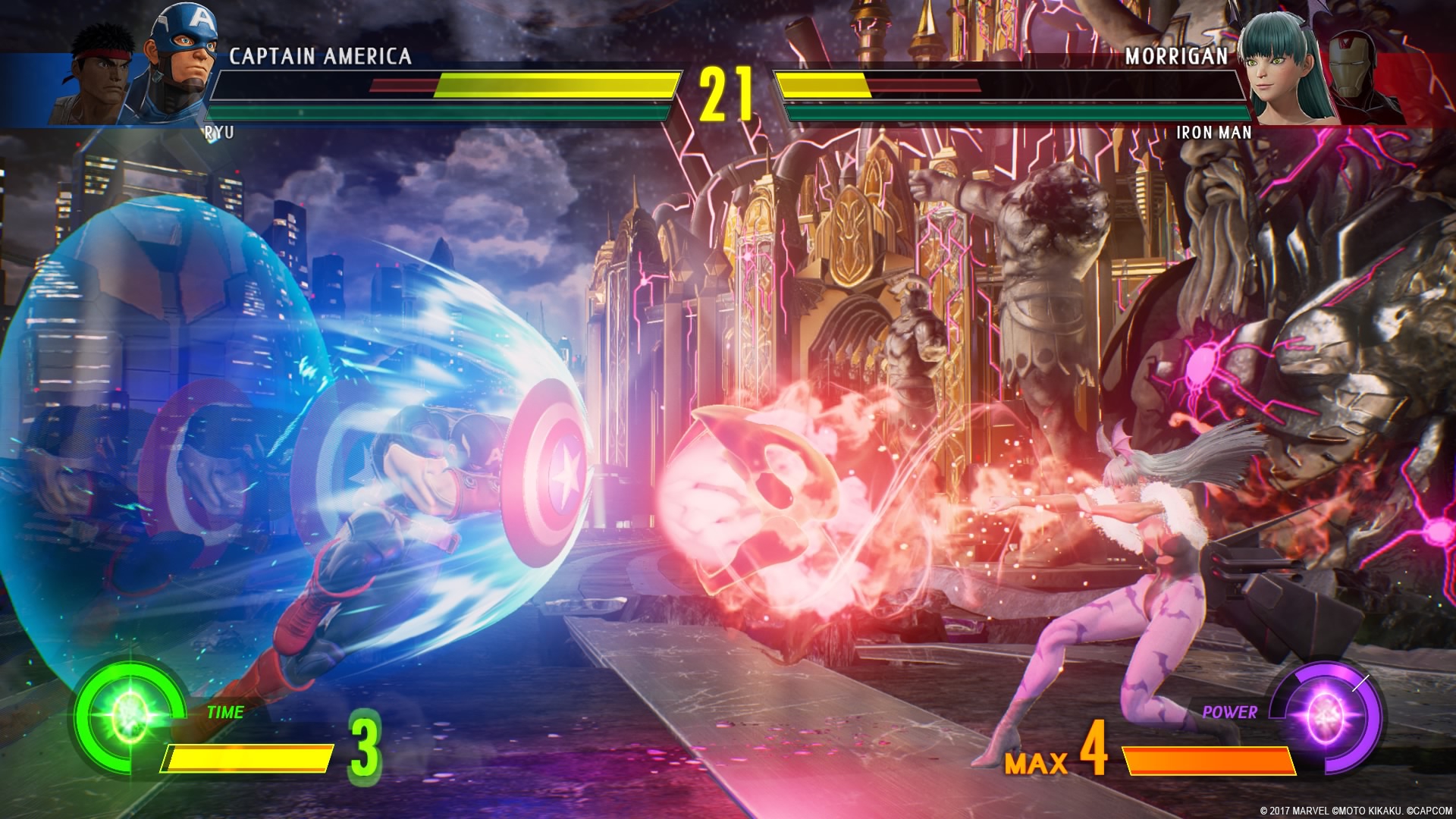 That being said, despite the ability to mix together your teams’ combos in new and unique ways and the ability to use Infinity Stones to accent your skills, it is worth noting that the thirty character roster is the smallest that has been included in a Marvel vs. Capcom game since 1998 and although plenty of fan favorite characters have made their return alongside a handful of fresh faces, there is a glaring lack of other characters from signature franchises on both sides of the field though. What is on offer will keep most fans of the series playing, especially since a large portion of the roster has also been reworked in various ways to help fit in with the new styles of combat and increase the accessibility of the game.

In fact, accessibility is given a decent amount of focus in Marvel vs. Capcom: Infinite as new players have a variety of tools at their disposal here. The game features auto combos that can be pulled off by pressing repeatedly pressing the light punch button to perform a decently damaging auto combo and there is even the option to allow for easy hyper combos to be performed if you so choose. This option can be turned off in the settings and, at least in my experience turning off auto hyper combos felt essential to give myself extra freedom, and even then these assists don’t swing things heavily in the players favor. These shortcuts instead are meant more as a way to give newcomers a chance to ease into characters and learn certain move chains as high level play still requires the same level of skill as before. 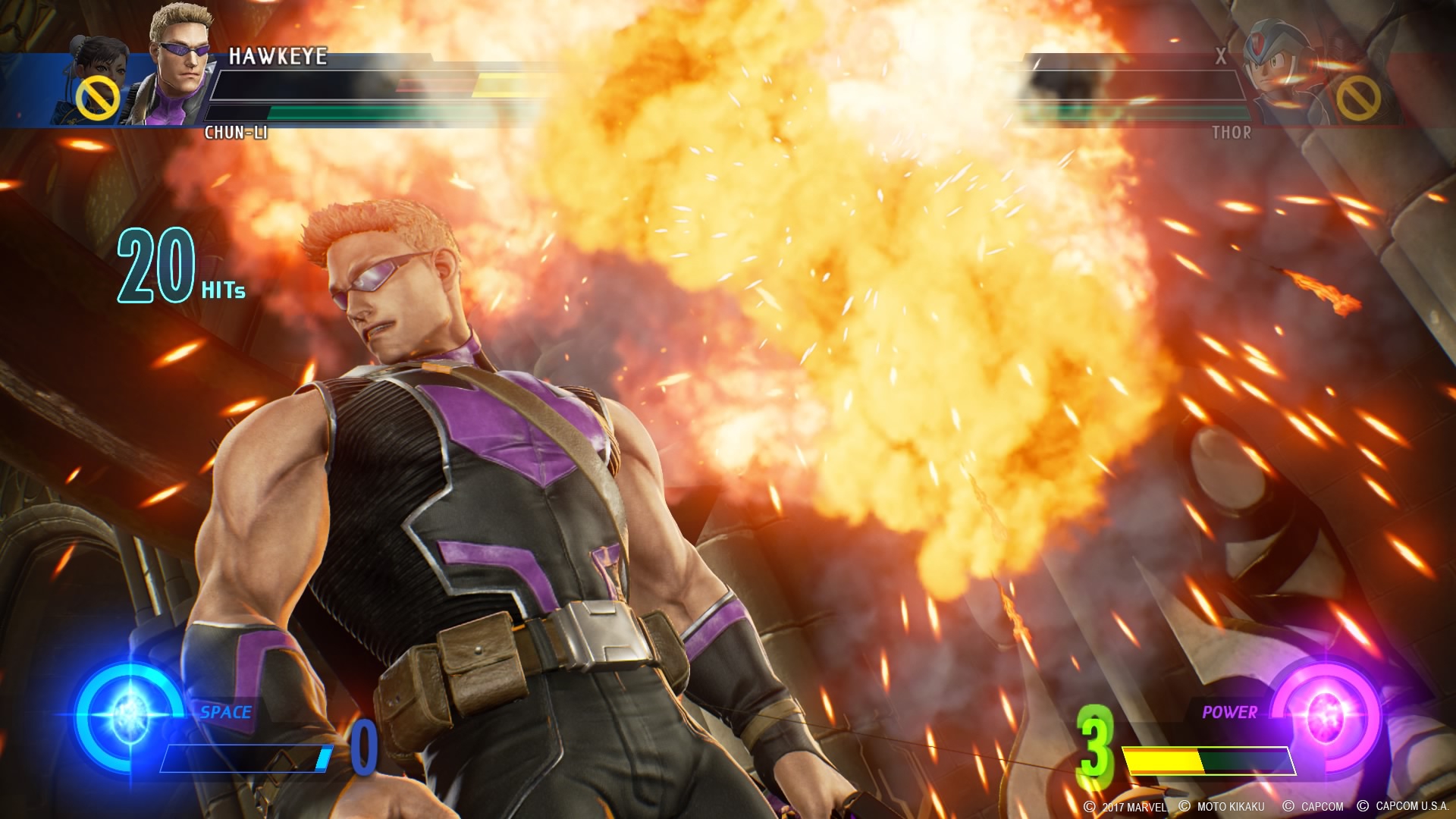 Nowhere is this more apparent than in the game’s “Mission Mode” that doubles as a tutorial of sorts. While the game does feature the bare minimum of modes required for a standard fighting game, a practice arena, a barebones Arcade mode, simple matches against the AI or a friend in couch co-op, the Mission Mode is where you’ll be able to spend time learning various special moves and how to chain them together. Each member of the roster is given ten missions alongside the standard tutorial missions and these tend to be incredibly difficult at first so be prepared for some frustration here as you try to learn just how to perform certain move cancels and more with little obvious explanation.

Outside of the aforementioned story mode and the various single player modes, the time most players will be spending their time is in the online section of the game.  Players have the option of selecting from a standard set of options such as ranked matches, player matches, and creating/joining lobbies to simply play with others in a more organized way. There is also a Beginner’s Lounge meant to be a place where fresh players can take part in ranked battles against other equally fresh players though this unfortunately is rarely the case. It is also worth noting that you can also opt to have the game search for online opponents while taking part in the training mode as well as while you make your way through the arcade fights, keeping your downtime with the game to a minimum. 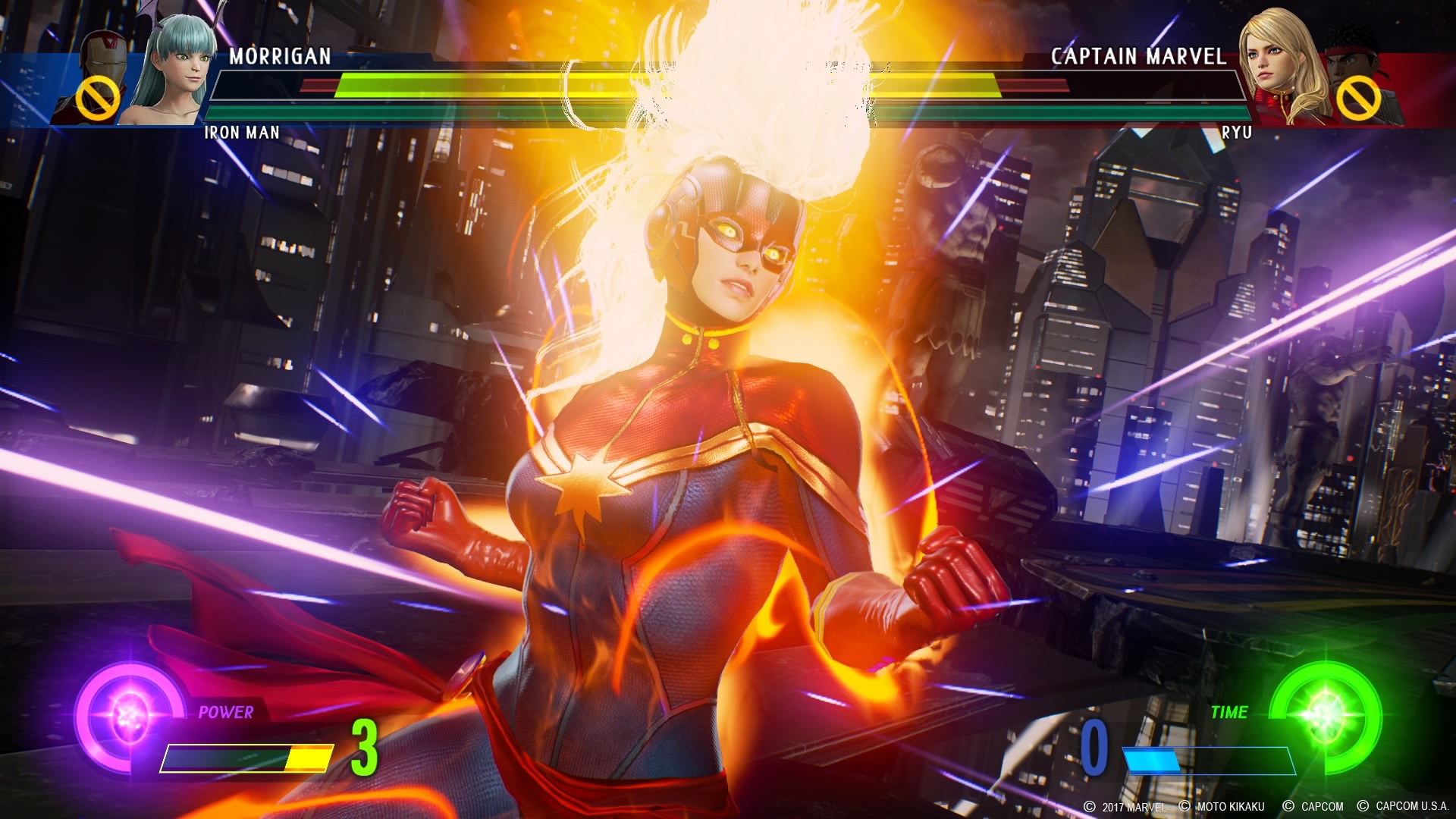 This is something that ends up being quite necessary as there have been more than a few times while playing that it took quite a bit of time to find a match even with the search parameters set to the widest available outside of the aforementioned lobbies. It is also worth noting that Marvel vs. Capcom: Infinite features some rather long load times for a fighting game, with the worst times being during the story mode, though even the simplest matches in arcade can take quite some time to load.

Looking at Marvel vs. Capcom: Infinite it is difficult to believe that it is even a game that has been released years into this current console generation without being a port of a mobile title. There is a complete lack of artistic direction when it comes to the characters as certain ones, such as Rocket Raccoon, Nemesis, Firebrand and Jedah, look quite detailed and unique but look far different from nearly everything else on the roster, especially when it comes to the rest of the human cast.

Rather than use a comic style like previous entries, a more realistic looking approach has been taken for the designs of the human characters and almost across the board they look incredibly bad. Frank West, Morrigan, Chris Redfield, and many more look like knock-offs compared to their usual facial appearances and even the body models of the likes of Hawkeye and Spiderman are woefully designed with awkward body design looking horrible both in the game’s story scenes and even during the actual gameplay where even some Hyper Combos have suffered a drop in quality. In fact for the majority of the stages players fight in there is little going on as players fight against a  nearly static background that, while imaginative with the way certain stages are melded together, lack the type of impact of a modern fighting game. 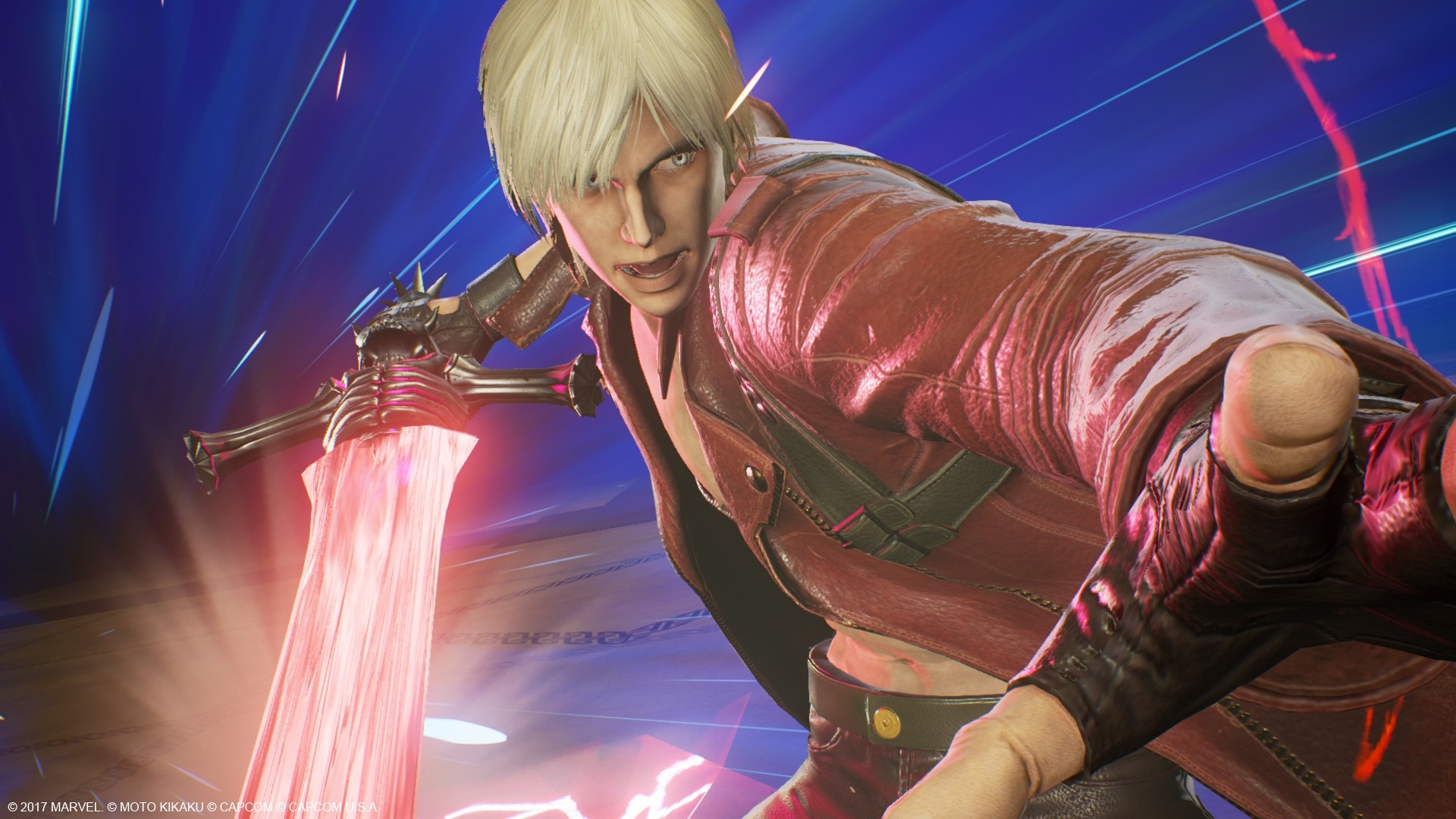 To make matters worse, outside of the fights even the main menu appears to be as done as simplistic as possible, giving them a generic feeling, though the background does mimic your fighter card which can be nice. Along those same lines the themes that are used for each character have taken a noticeable dip in quality as players will find it difficult to even remember most of the background music that is used throughout the game. Thankfully the voice work is at least handled well with the numerous voice actors fitting well into their roles.

Marvel vs. Capcom: Infinite features a refined combat system that introduces a number of new features, such as the fast paced Active Switch system and the modifications available with the Infinity Stones, to excite returning players while giving newcomers a helping hand with assists, but there is a bit of a tipping point where production values do come into play and with woeful character designs applied to an already middling offering of a roster, poor attempts at stage design, a disappointing soundtrack, and story details that may give longtime fans some laughs here and there but leave others disappointed, even appealing combat mechanics begin to fall to the wayside.

Marvel vs. Capcom: Infinite may offer a solid fighting experience that should hook longtime fans of the series but it happens to be buried beneath such poor production values that one will wonder just where this game’s development started and what they were aiming for in the end.
7