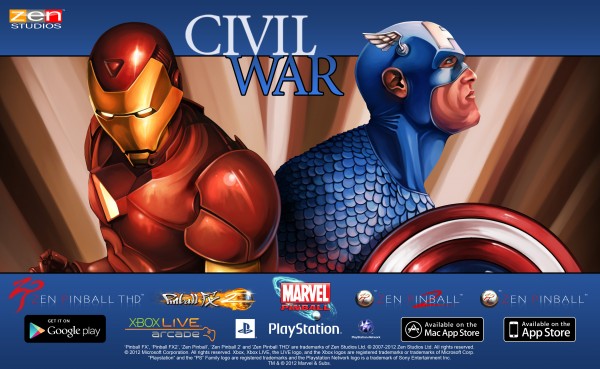 Overview:
Let’s get this out of the way from the get go, Zen Studios are good at what they do, damn good in fact. Now while their titles are for the most part very simple, they are also very well made and quite addictive. The Zen Pinball series is one of their most popular and most well produced franchises. The most recent installment is of course part of their line-up of Marvel spin-off, Marvel Pinball: Civil War. It’s a simple concept, Pinball with Marvel characters. But is it worth your time? 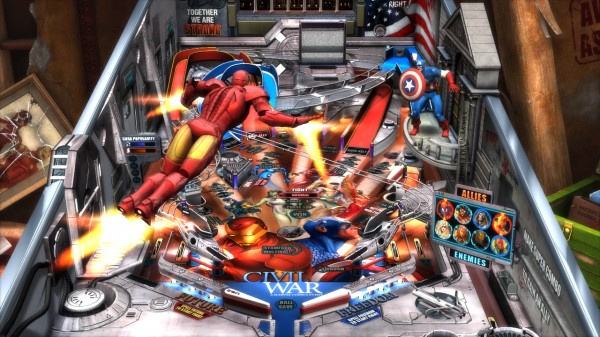 Gameplay:
Marvel Pinball: Civil War is your standard Zen Pinball game at it’s core but there are enough differences to make it worth a look in, especially if you are Marvel fan. The game features a very loose story regarding some kind of civil war between Captain America and Iron Man, two members of the infamous superhero group The Avengers.

As you play through the game, hitting different things will activate a number of reactions on the pinball table, for example certain characters will slowly start siding with either Captain America or Iron Man. This all leads to an ultimate clash between the two in the end which really doesn’t matter too much.

Like I mentioned at it’s core it’s a standard pinball game, your goal is to get as high a score as possible while simply controlling the two bumpers. It’s simple, yet addictive gameplay that anyone can pick up and play.

While the Marvel aspects of the game don’t really serve much purpose in terms of gameplay it does at the very least make it feel like a different game, even though in actuality there is not much different gameplay wise to other Zen Pinball games. It’s really just some fan service for the Marvel junkies out there and that is good enough for Marvel Pinball: Civil War. 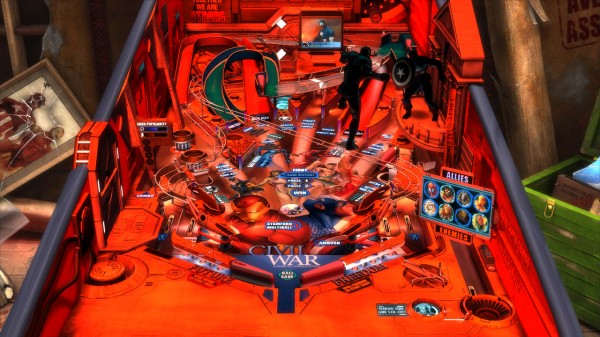 It may not be the most interesting looking pinball game on the market, but it is serviceable enough for Marvel fans that it does an admirable job visually. It doesn’t have a whole lot of flair but it does look pretty damn cool and isn’t that what Marvel comics are about, cool superheros doing cool things?

Soundtrack wise the game features one of Zen Studios best works to date with a powerful and engaging audio experience that really adds another layer altogether to the gameplay. Zen Studios are nice enough to even allow the soundtrack to be downloaded for free here. 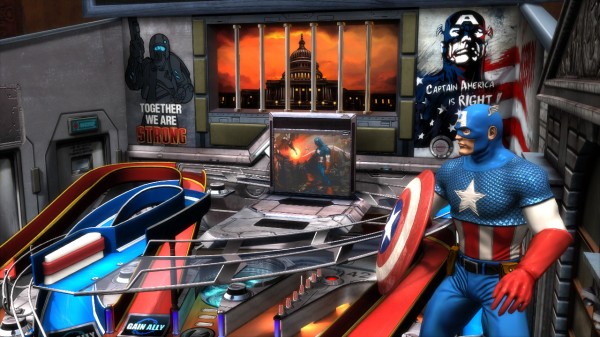 Overall:
You can’t do much better in terms of a video-game pinball experience than Marvel Pinball: Civil War. It is an addictive game that will have you hooked. Whether you are a Marvel fan or not there is a great deal of enjoyment to draw from this game. It doesn’t matter if you are playing to achieve a high score or just to see what happens in the epic clash between Captain America and Iron Man, this is undoubtedly well worth the purchase. This is a truly exciting pinball experience and a true showcase of why Zen Studios are just so very good at what they do – making genuinely fun games.