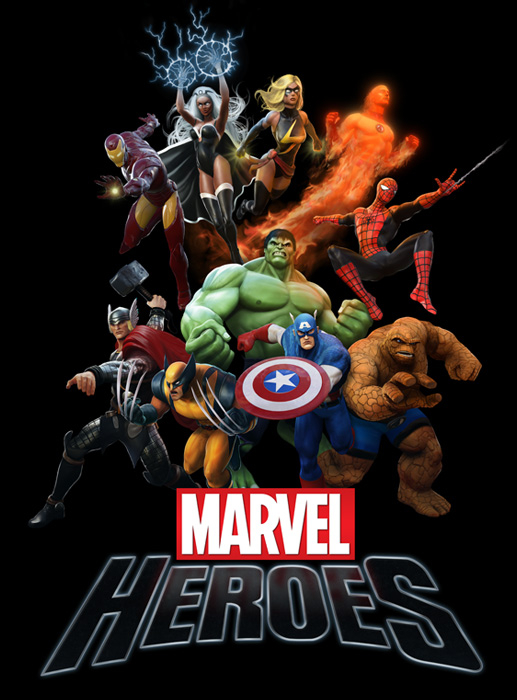 Marvel Heroes is an MMO-ARPG in the vein of Diablo II, which is largely due to the involvement of now President and COO of Gazillion Entertainment, David Brevik – a game developer who worked on the concept and development of the Diablo series. The game is free-to-play and gives players an expertly-written story by Marvel super-scribe Brian Michael Bendis to sink their teeth into, presented in-gameplay and through well-drawn motion comic cutscenes. 26 playable characters are available at launch, but the question is; is it really any fun being a superhero in this instance? Read on to find out.

Uatu the Watcher has been observing the Marvel Universe. Through all major events, nature’s course has been corrected, but the mystical guardian must now intervene in affairs as Victor Von Doom has acquired the Cosmic Cube. This is the opening cutscene – the confrontation between Earth’s protector and the evil doctor, where the side of good loses out and it becomes instantly clear that Earth’s very existence is in serious danger. Cutting away from this event and focusing on the more immediate issues at hand, we are tasked with ‘Retaking the Raft’ – a prison which houses the worst villains in the world, whom have escaped the facility and threaten havoc. 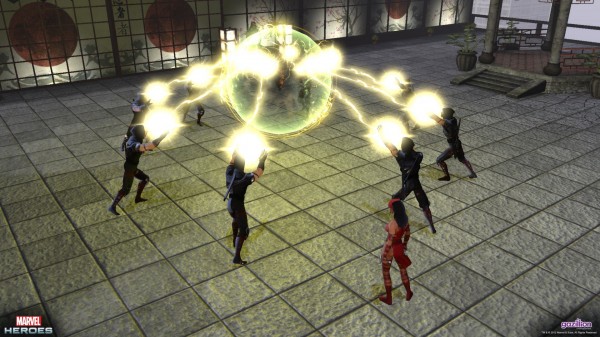 S.H.I.E.L.D. has spared no expense in getting the best of the best on this containment job, but not every baddie could be rounded up. It’s from this point on that hell breaks loose across the world as the player (as their chosen hero) then comes into contact with the likes of organisations A.I.M, the Maggia, the Hand, Hydra and numerous others, over 8 Chapters of story-based missions. The campaign element of the game fits right in with some of the more grand Avengers tales found in its comic inspirations. Brian Michael Bendis’ signature writing shines through, whilst also conforming to the medium and structure of a video game narrative.

When I said Marvel Heroes was reminiscent of Diablo – gameplay-wise – it’s ostensibly true. It subscribes to the point and click, Action-RPG play-style that was established by the latter back in 1996. Attacking an enemy is as simple as clicking on them with the left mouse button. Clicking on a point on the ground will lead your character to that spot, or if you want you can use ‘W’ key on the keyboard with the cursor position determining your direction. You can also click and hold the LMB in the direction you want to travel. The Avengers Tower is your central hub, which you can quick-travel to using the “bodyslider” button on the top right of the screen. Likewise, there are phsyical checkpoints throughout the lands that are organised by the Chapter they are encountered in, so you can easily return to any given location to complete a specified mission. 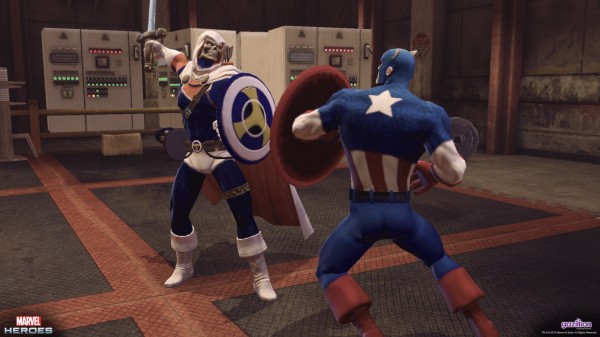 As you gain XP and level up through combat, you will unlock upgrade points that you can allocate to certain skills, broken up between three trees. The abilities they enable vary depending on your chosen character and their specialities. I, for example, played with Daredevil for most of my play-through, whose skills were divided between his billy clubs, his heightened senses and his agility/movement abilities. You can then assign those to keys on the keyboard, customising their position for optimal efficiency. All of these special abilities (excluding the basic attack) take mana, which regenerates when you go on the offensive, or through mana drops and concoctions that you can craft.

Crafting is achieved by speaking with Hank Pym aka Ant-Man, who is stationed in Avengers Tower. Through interacting with him, you can create health kits, develop serums, health balms and adrenal formulas, upgrade your gear and costumes (with a defensive or offensive affix) and more. You do this by combining elements, most of which you will acquire through drops in-battle: enhanced genomes, nanotech filaments, ionic particles and astral essence. Vendors also have levels attributed to them, which can be raised by the player donating an unwanted item (which you can sell instead if you’d rather the cash). The higher their level, the more they can offer/do. 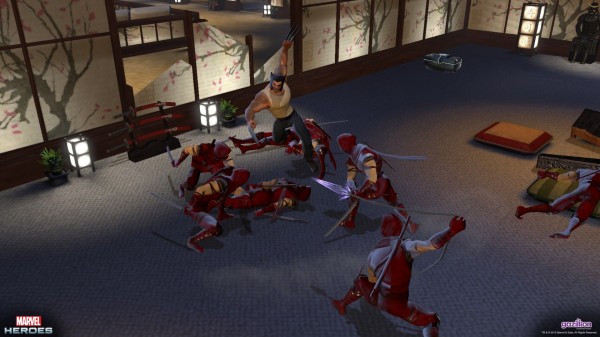 In reference to the “cash”, that can be spent on weapons, armor, etc. But then there are Gs – a form of currency that is used in the micro-transactions space. This is how the developer makes money, but you’ll be happy to hear that most of the items that can be bought with real money can also be unlocked, although it would take a large amount of playtime to attain something as significant as a new costume or character. Regardless, you are not being suckered into paying for progression. I know that is a common concern with F2P, so I’d like to alleviate that trepidation right here and now.

Communicating with other players is easy. You can send out a general message through the chat channel, or invite specific members to join your party. Sometimes you may find yourself working on a public combat event or within a party organically, with the option to leave it always open to you. You can even create a “Supergroup” – the equivalent of a guild. The level cap at the moment is set to 60; you may reach level 20-25 by the time you complete the story driven chapters (which isn’t a very long journey by any stretch). 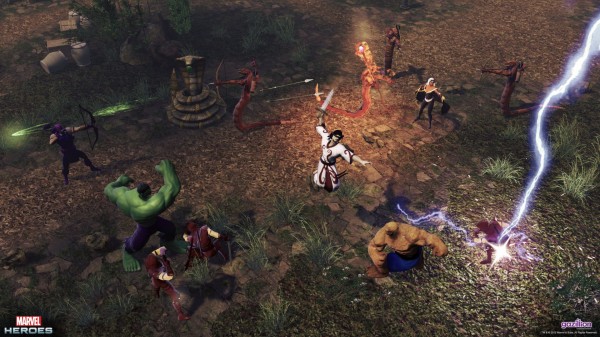 “Endgame” will be waiting for you post-campaign, where you can try your hand at Group Challenges, Survival Challenges, Daily Challenges and PVP (still in beta form). These can be accessed through the green, red and purples terminals inside Avengers Tower’s north wing. Endgame bosses features, and the higher difficulty level you tackle, the better the loot you can attain upon completion. There is a lot here to keep you busy and challenged. This is where the brunt of your time will likely be spent, so it’s nice to see so much content and support being put into ensuring longevity for the title.

Marvel Heroes was built on Unreal Engine 3 – it looks good, but let’s be honest; everyone knows what to expect from a F2P title graphics-wise. That’s not to say it lacks style though. There is no ambiguity in the visual cues and all of your favourite heroes and heroines have been recreated with great attention to detail and accuracy; the same goes for the myriad of alternate costumes available. You’ll be exploring virtual playgrounds as diverse as the Bamboo Forests of Madripoor, the Nightclub District of Hell’s Kitchen and the communal hub of Avengers activity, the Avengers Tower. In regards to the U.I., everything is laid out in a clean, straight-forward manner without looking too basic or simple. 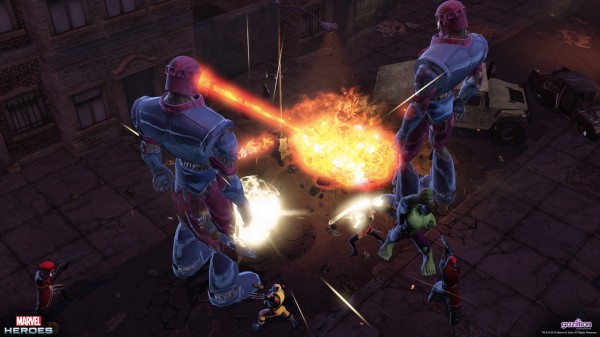 Audio-wise, if you’ve played the Marvel: Avengers Alliance Facebook game (now on iOS also), you’ll have a good idea of the audio design direction Marvel Heroes takes – certain sound effects are strikingly similar. The music is appropriately heroic in tone, and each character has a few choice lines that they speak depending on who they come into contact with. E.g. Daredevil says “You want me to patrol Yancy St. Ben? Even I’m not that fearless!” when in the vicinity of The Thing. The voice-over cast is top notch with many reprising their roles from other mediums, such as the various animated series, and so those who are familiar can expect the narration and voice acting to be of a consistent and recognisable quality.

Marvel Heroes has its moments, especially for the brand’s comic book aficionados. The interface is efficient and uncluttered (looking at you World of Warcraft!) and it has the potential to be a whole lot of fun when playing in a party of friends. If you are more of a loner type who is trying this out solely because of your fandom for the superheroes within, you can explore and play at your own pace whilst still coming into contact with others and maybe even automatically joining a bespoke group for a random event here or there. It’s very free-flowing, but it’s also inherent in the genre that boredom will set in faster when playing a more private game – if you have friends who are MMO-RPG fans, get them onto Marvel Heroes and join up in-game for maximum enjoyment.

The story/campaign portion itself is considerably short in comparison to other like titles, which factored into that boredom setting in faster for me. You will reach “endgame” rather quickly, which does provide a rather robust set of challenges and replay-ability in all fairness. But it also doesn’t help that you level up relatively slowly in the process. It all just feels more than a little unbalanced. It is free-to-play, which is fantastic, and new characters can be unlocked so you’re not necessarily being forced into micro-transactions if you commit your time, but the game just didn’t maintain my interest nonetheless. But again, if you’re a fan of Marvel and the genre, and have like-minded friends, give Marvel Heroes a go. Tip: If you decide to try it out, download it through Steam… the standalone BitRaider Client pre-installs everyday and is God awful.