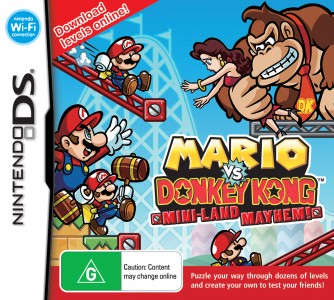 Mario vs Donkey Kong: Mini-Land Mayhem is the fourth installment of the successful Mario vs DK spinoff series which has you guide wind-up Mario toys to a particular goal, avoiding many obstacles along the way. In many ways, this entry stays true to the same formula that we have seen in previous incarnations, but with much more content and some brand new game-play mechanics that add quite a bit to the growing franchise. Here is my review for Mario vs Donkey Kong: Mini-Land Mayhem! 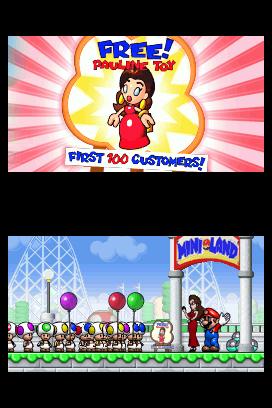 Story
The plot for Mini-Land Mayhem kicks off with Mario and Pauline sponsoring an opening for a brand new theme park where mini-Pauline toys are being given away to the first 100 attendees. Donkey Kong soon shows up to claim his toy, but when he is just a little too late for the give-away, he becomes enraged and kidnaps the real Pauline. It is now up to Mario and his wind-up friends to travel through 8 worlds, level by level, to save Pauline once and for all.

If you remember the original Donkey Kong titles, Pauline was the victim in those games and in many ways, the whole Mario vs Donkey Kong series is more of an evolution of that age-old formula. We also see many other classic characters throughout the game in wind-up and real form, so Mario fans will be happy to see many familiar faces along the way. Being a puzzle title at heart, the story isn’t really a big presence of the game as this title is all about the unique form of gameplay, so let’s move on to that area. 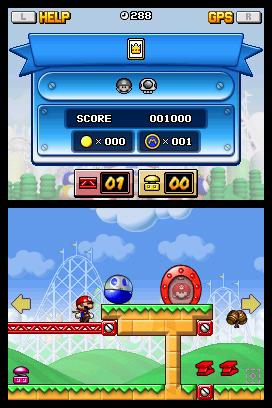 Gameplay
In previous Mario vs DK titles, the focus of the game was to control the minis to a certain destination while collecting coins and various items along the way. Mini-Land Mayhem is the same for the most part, but now the controls are much more environment based so instead of controlling the minis along transparent blocks, you must now drag and pull on various mechanisms to clear a path for your little soldiers to reach their goal.

When a level starts up, we see the famed plumber winding up his little minions, and then they set off into the environment. The minis do not stop for anything though, so keeping a close eye on each one is pivotal in completing each stage. Using the Nintendo DS’ touchscreen, girders are used to connect platforms to each other on the map. If you see a rivet, simply pull and release a girder between one rivet to the next and a platform will then be available for your minis to safely cross. It may sound simple, but the game truly uses strategy for each level, as there are many obstacles such as spikes, standard Mario-themed enemies, pitfalls and many other traps that are ready to take your minis down one by one. You also are only able to have a certain number of girders in an area at a specific time, so switching these out must be done quite often in the game, which adds the element of timing in to the gameplay. How many pieces you are allowed to use is judged by however many are collected within the stage by your minis.

Of course girders are not the only thing that gets the wind-ups from point A to point B. Many areas have barriers with that can only be opened by having a mini hit a certain trigger. Since these minis cannot jump, there are plenty of spring-loaded launchers that must be used, launching minis in the air upon contact to a higher point in the stage. Timing is yet again used with these contraptions, as each can be moved to fill a transparent spot and many times if you are not there to catch your mini, it will meet its doom due to an environmental obstacle or enemy. Ladders, power-ups, conveyor belts, warp pipes and many more passages can also be found as you travel through the varied worlds, each adding their own new techniques to add different twists to the puzzles. 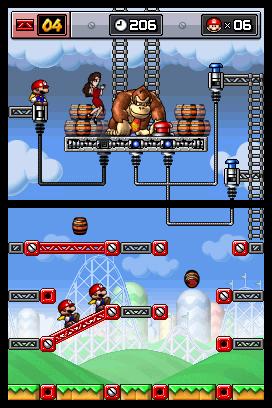 As you move throughout the game, gameplay changes up in different ways. One of the prime examples are the other wind-ups which are used such as Toad, Princess Peach and few other familiar characters. These wind-ups differ as they must pass through their own specially marked door. My favorite levels in Mini-Land Mayhem though come down to the boss battles themselves, though. The boss stages are crafted more as an ode to the classic Donkey Kong games by design, but with the same core style of the Mario vs DK series. You must guide your minis in the same way as before, but instead of reaching a door, they must hit a trigger point which damages the big ape. Each boss battle is different from the next so reaching these feel like an extra reward in itself, as the way they are presented gave off an old-school nostalgic feel that truly lets each world end with an exclamation point.

As a whole, Mini-land Mayhem really isn’t too different from the past titles in the series, but the fresh and varied level design kept me going for hours at a time. Each puzzle is well thought out and the pace of challenge grows as you complete the game, so you really must think a lot more and use strategy to safely guide your minis to the correct doors later in the game. The menu system is well integrated into the game as well making everything easy to access at anytime. Nothing felt that repetitive either with each world contributing something new to the equation, mixing up the gameplay mechanics as you progress. With the addition of coins and trophies which can be collected and earned to get better scores, perfectionists should get even more time out of the whole experience as many coins are well hidden and can take some serious planning if you want to grab them before the timer ticks down to zero. 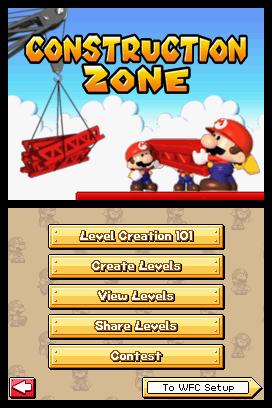 After you complete the game as a whole, it doesn’t stop there. The Construction Zone lets you construct your own levels with all of the features from the main game. Once you make a level, you can go back and play it at will, or you can also upload it to Nintendo Wi-fi to stump other players all over the world. Players have already created a ton of levels, so just going in and downloading new areas can add an infinite amount of replay value.

Graphics/Audio
I was very impressed by how Mini-Land Mayhem looks. The whole game is bright and cheery throughout, and each area is heavy in detail that reeks of that Mario charm that fans have come to know and love. The minis themselves are also full of character and life and share this same high-end detail. With the worlds constantly changing as you progress design wise, each area not only plays differently, but has it’s own special themes to add that rewarding feeling of progression. Some stages have a lot going on at certain points, especially boss battles, but fret not as there was absolutely no hiccups or slowdown during my play-through and everything flows smoothly. 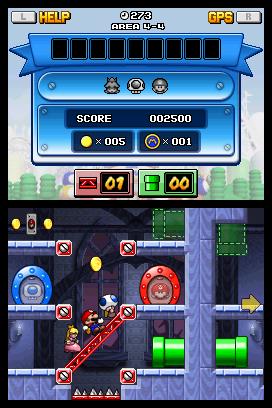 The music in the game might just be my favorite soundtrack for a Mario title on the system period. With remakes of classic familiar tunes from both Mario titles as well as Donkey Kong Country, and even a few new tracks thrown in, it is clear that Nintendo wanted to appeal to their core audience with this title. Sound effects are also woven in well as the little voices of the minis and characters such as Pauline are all clear and well acted. These little things like getting to hear your little minis shout in victory as they reach a door or Pauline scream in agony as she is taken to the next level add a lot more charm to the title, so all of the high quality work done on the audio should not be ignored to get the full experience here.

Overall
Mario vs Donkey Kong: Mini-Land Mayhem is not a groundbreaking sequel, but it does extend the series’ lifespan with new elements of gameplay that add some new puzzle mechanics as well as fantastic level design which is challenging and simply fun to complete. Nintendo have filled this title full of their classic charm and the overall quality of presentation make it clear that this game was crafted for old and new fans alike. Along with the jam-packed main story mode and the Construction Zone, this is the perfect title to pick up and play anytime as it never really ends. Not only is Mini-Land Mayhem now a necessity to a Nintendo DS library, it simply tromps many other addictive puzzlers on the console proving yet again that Mario still holds the throne when it comes to putting out fantastic titles.

I give Mario vs Donkey Kong: Mini Land Mayhem!: