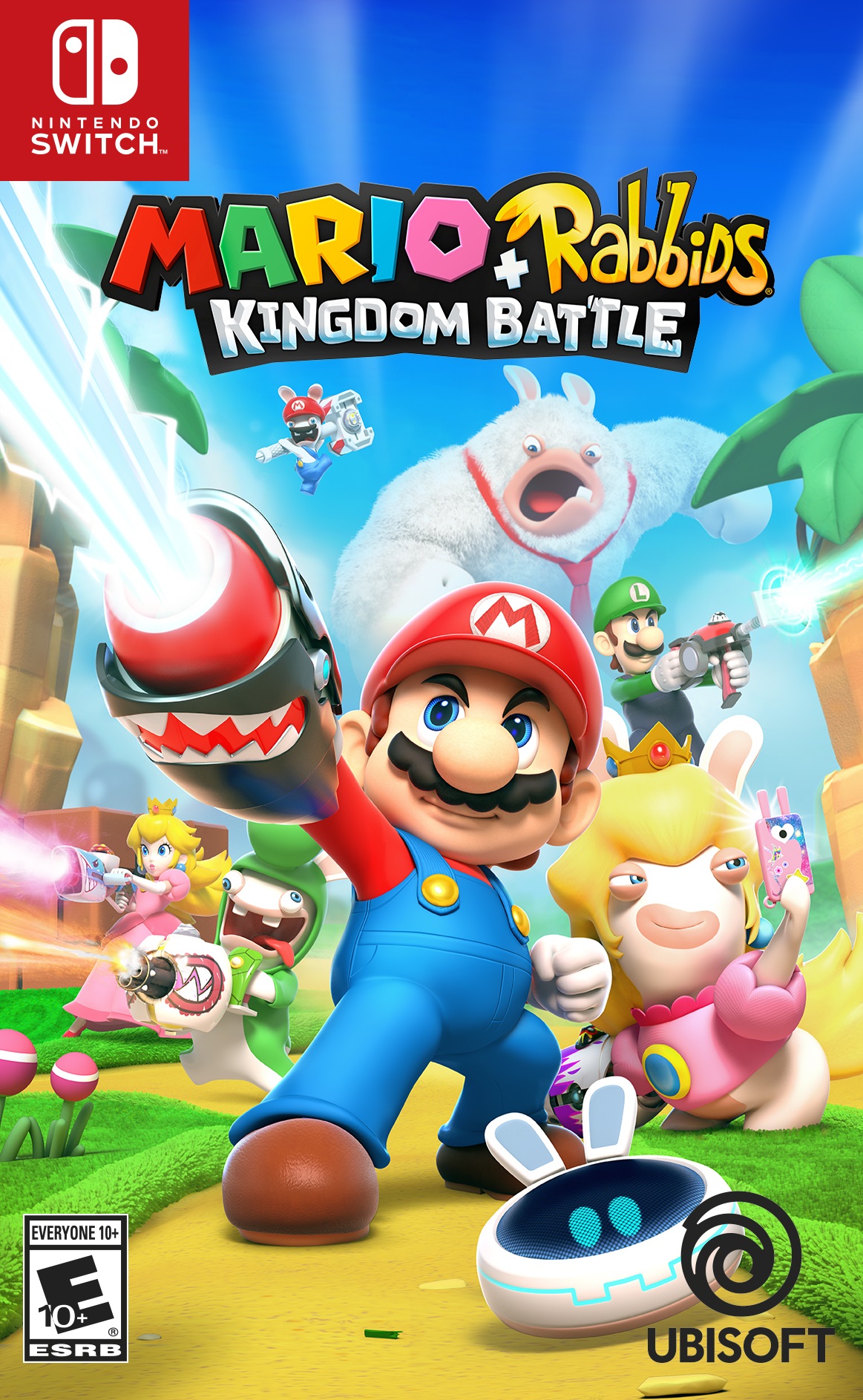 There have been many types of crossovers in the history of media but most of the time these types of crossovers are at least somewhat predictable. In the case of Mario + Rabbids Kingdom Battle, very few people could have ever guessed that Nintendo’s iconic mascot would be joining forces with Ubisoft’s hyper and idiotically crazy Rabbids in a video game but here we are. With a heavy XCOM-style influence in the game’s squad shooter combat system with a sprinkling of Disgaea here and there, does Mario + Rabbids Kingdom Battle turn out to be a satisfying strategy RPG worthy of Nintendo’s trust?

A brilliant young scientist has nearly perfected a creation called the SupaMerge, a helmet that gives the wearer the ability to merge two items together to create a new object. When this girl leaves her lab, which is decorated heavily with Mario themed merchandise and promo material, the Rabbids manage to find their way in with the help of a time machine made out of a washing machine. With the complete lack of impulse control that the Rabbids are known for, they quickly begin messing around with her stuff and soon take a keen interest in the SupaMerge. Even going so far as to fuse a Rabbid with a cell phone and wig to create a Princess Peach Rabbid, and much more. 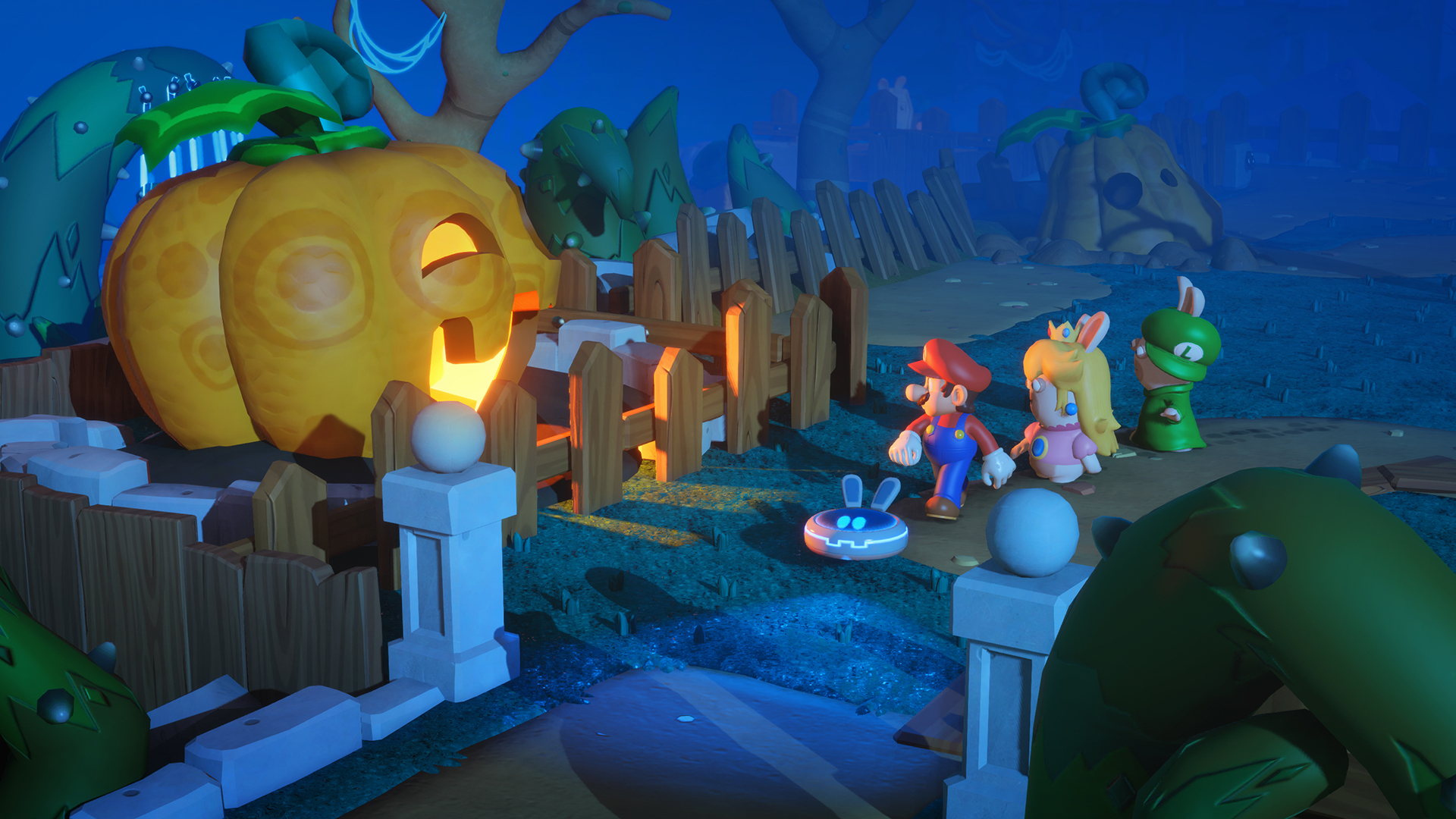 Thanks to the issues still needing to be resolved with the SupaMerge and the Rabbid’s time machine, a portal is created and sucks all of the Rabbids, as well as an AI crafted by the girl named Beep-O, to the Mushroom Kingdom where the Rabbids begin running amok. After altering numerous elements of the world with Rabbid features and running off on their own, Mario teams up with a pair of Rabbids merged to look like his friends in an attempt to save his real allies as well as restore order to his home world with Beep-O assisting him along the way.

The writers for this game have managed to successfully craft a scenario where the Mario world and Rabbids could co-exist and that alone deserves some praise but they also have managed to create an enjoyable storyline at the same time. While lacking in major twists, those playing the game will be pleased with the weird nature of the developments are handled as well as the right and colorful charm of the world, though you also shouldn’t expect witty humor here as most of the comedy is handled in an extremely simple manner.

As players begin the game they will see that there are a number of different lands that Mario will need to travel through and complete various journeys throughout these areas and while this may make the title appear on the shorter side, these lands can be revisited at any time once completed allowing players to experience them again if they choose to. Each of these areas will feature the player taking part in exploration parts where they will solve puzzles to continue on, discover secrets, and more before arriving at battle sequences that are usually very easy to spot. 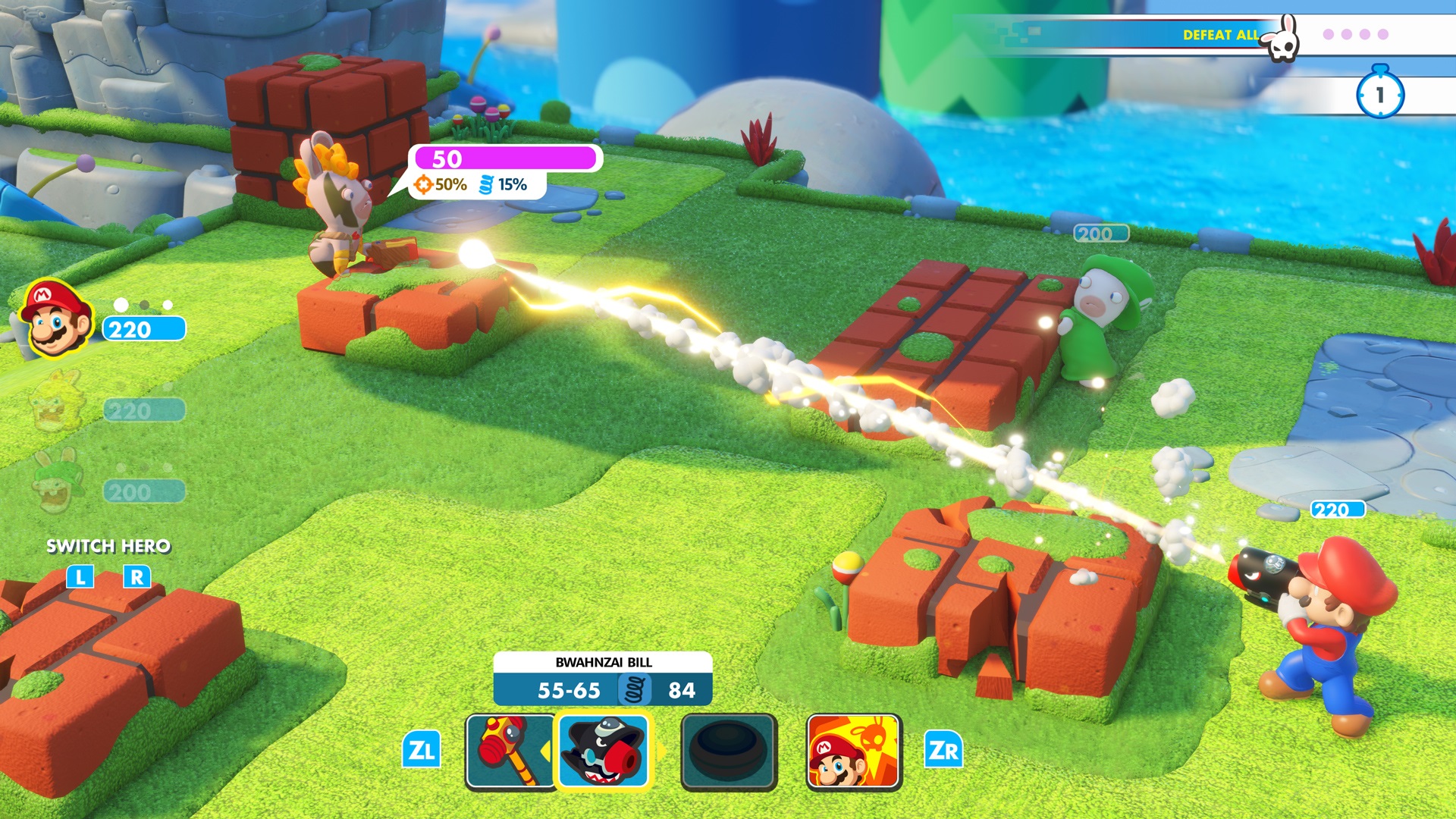 It is interesting to note that despite featuring childish humor and being bright and colorful, the tactical combat of this game isn’t something to simply ignore as it can be quite challenging at times, especially once the kid-gloves come off, though an “easy” option is available before battle to make the game a bit more kid friendly and more accessible to those not familiar with tactic games.

Players will need to worry about character health as characters do not regenerate heath between battles in a single area players cannot even rely on only using specific characters once their available roster grows beyond the initial few. Thankfully even though the game difficulty does have a few spikes in it and the AI can be quite cunning, especially when numerous new enemy types begin to roll onto the field, the way that the combat system is presented and the numerous options available for the player to take advantage of in a firefight make for a highly accessible game. 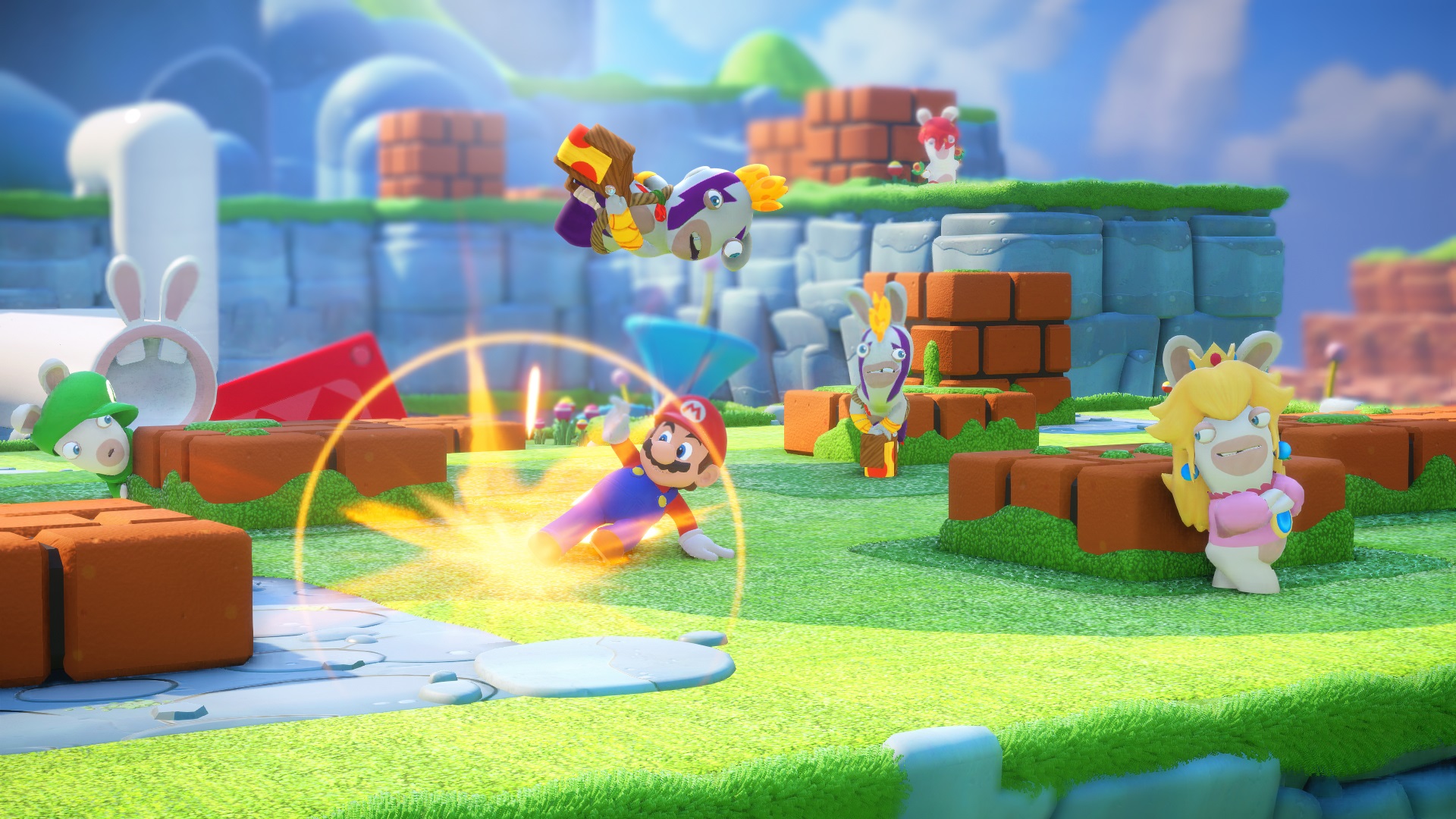 This is especially true thanks to the fact that every character in the field can perform a number of tasks during their turn, including movement, performing a special ability, and attacking in any order they choose. This gives the player far more freedom than your average tactical shooter and allows for a large number of moves to be chained together to swing the fight to your advantage. Combine this with the fact that every character has a unique set of skills that can be upgraded and customized through coins and power orbs, which allows for purchasing of new primary and secondary weapons, some of which can have special status effects such as “honey” that prevents movement, as well as unlocking character skills. There is even an option to reset your skill trees at any time, giving players a chance to change their abilities between fights if they find their new moves lacking for an upcoming battle.

This high level of flexibility allows for players to take big risks and witness some stellar combinations, especially if you take advantage of the “team jump” ability that allows a unit to be launched by another friendly character to a new location, including areas that would otherwise be inaccessible. There are even dash attacks and abilities that allow friendly units to take a free shot at enemy characters on the move. Most fights will have different goals to them such as defeating all of the enemies, reaching either a certain point in the field, surviving a number of turns, or simply defeating the boss which can be challenging in its own way as each boss has a unique feature that leads to their defeat. 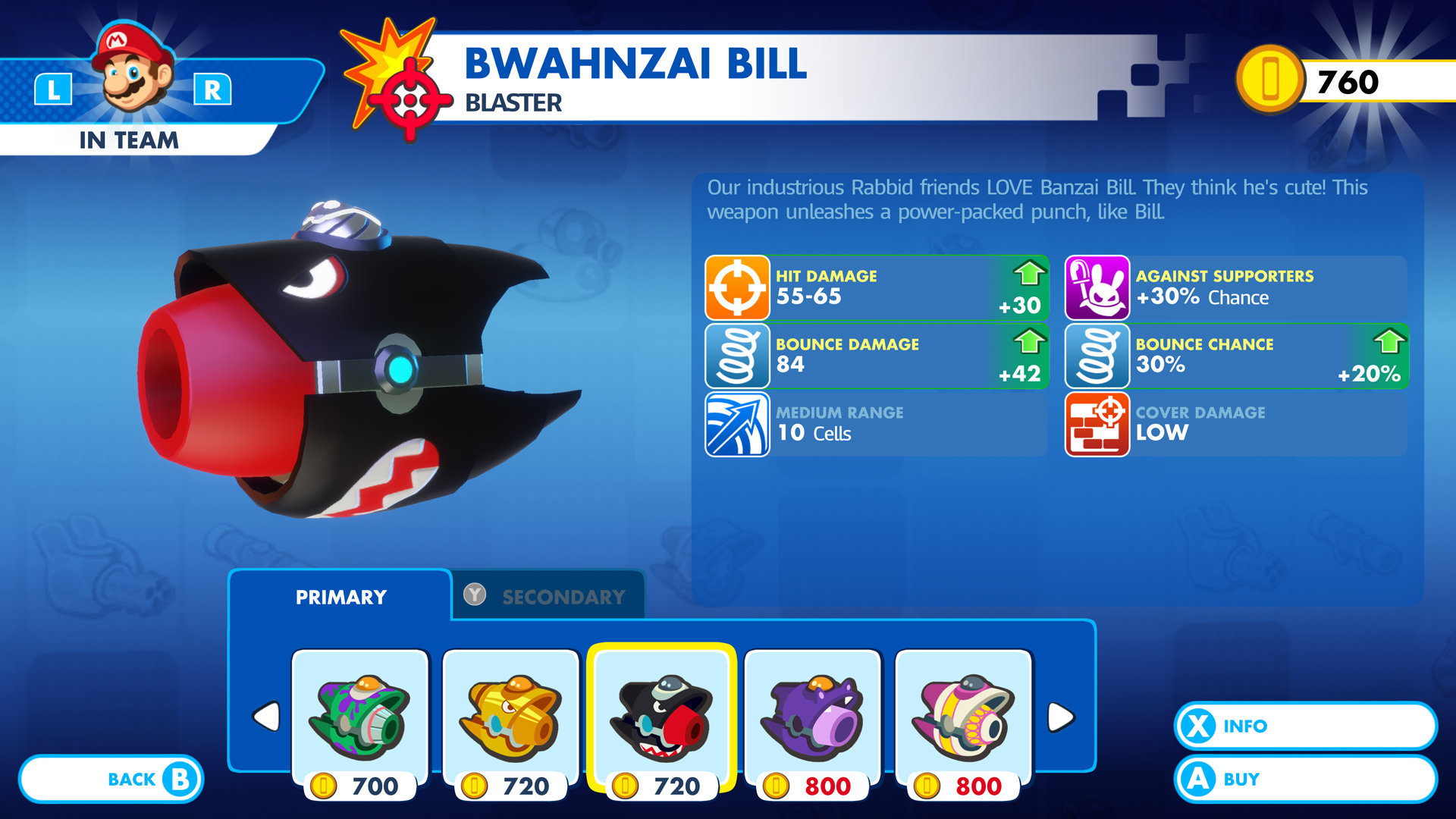 If you happen to end up making a bad initial move there is also no punishment for restarting a battle and trying again with a different set of fighters or with modified/upgraded characters. This can happen far more often than one would think thanks to the fact that the enemy AI can unleash devastating attacks and most cover in the game can be destroyed by incoming fire. As such your carefully laid plans may fall to the wayside once your cover is down and Mario is left wide open for the rest of the enemies to unleash on him.

There is even a two player aspect if you so wish with both players able to make use of a single Joy-Con if the wish. These maps are unlocked as you progress through the single player campaign and allow for four characters to be brought into battle instead of the standard three. With each player taking control of two characters, there are plenty of new combinations that can be used and planning in this mode is a bit more necessary as these co-op maps can be more difficult than your average map. 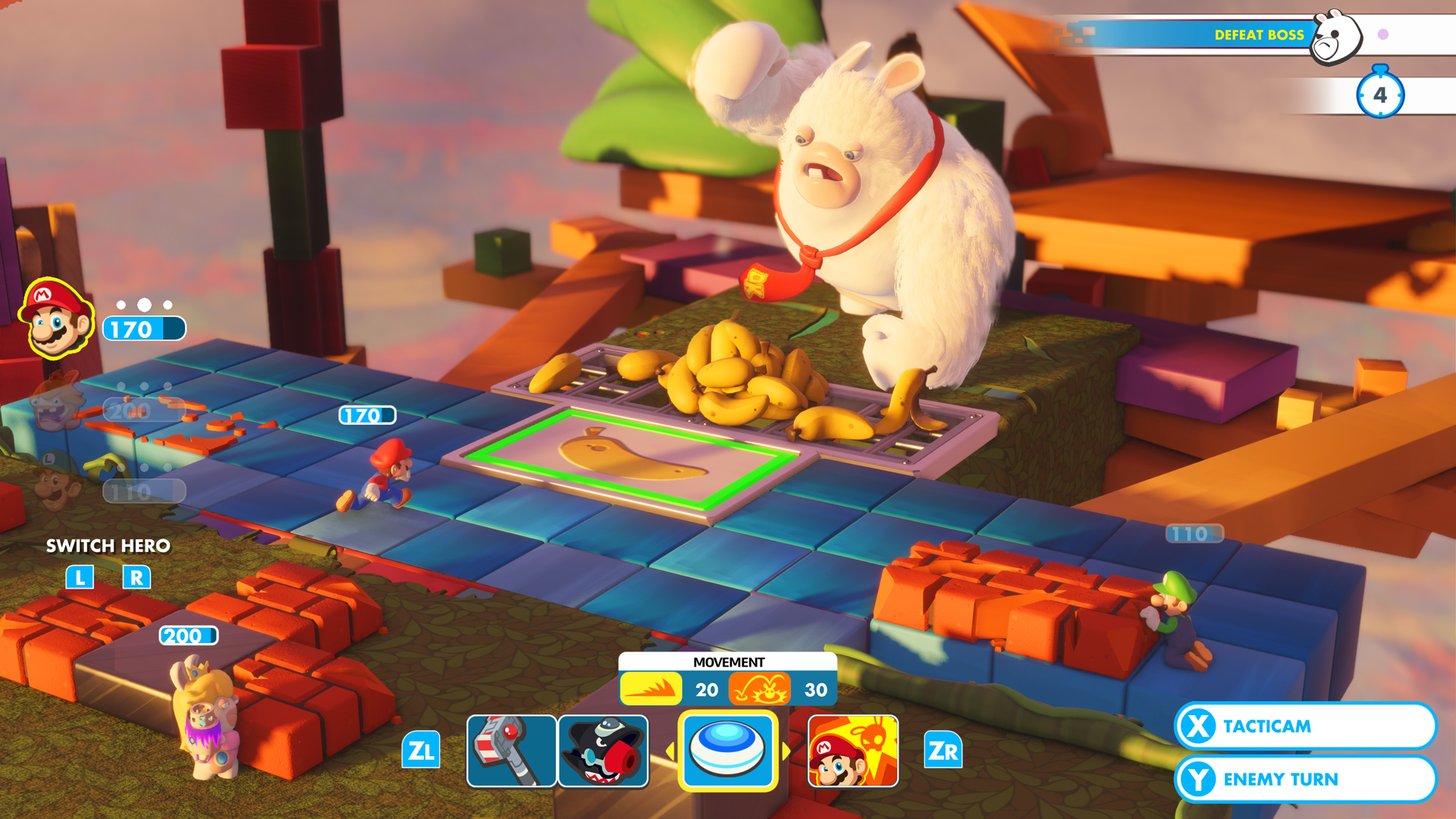 Outside of the standard battle modes players will find that there are plenty of fun little puzzles are just the right kind of difficult and even bonus like stages such as the classic coin rooms. In fact as we mentioned earlier, players are encouraged to revisit areas once they’ve advanced further in the story as they will be able to access new areas that will contain special treasures and collectibles in an effort to give completionists and those looking to extend their time with the game a little something extra to look forward to.

Combining the colorful art style that the Mario series is known for with the wacky nature of the Rabbids series creates a fantastic looking world with plenty of unique looking objects to examine. This is primarily due to the way that numerous objects now have Rabbid features so even older and familiar areas that Mario fans might recognize look a bit different. Traversing a world like this and taking parts in battles against numerous themed enemies make every area in the game a delight to fight through. 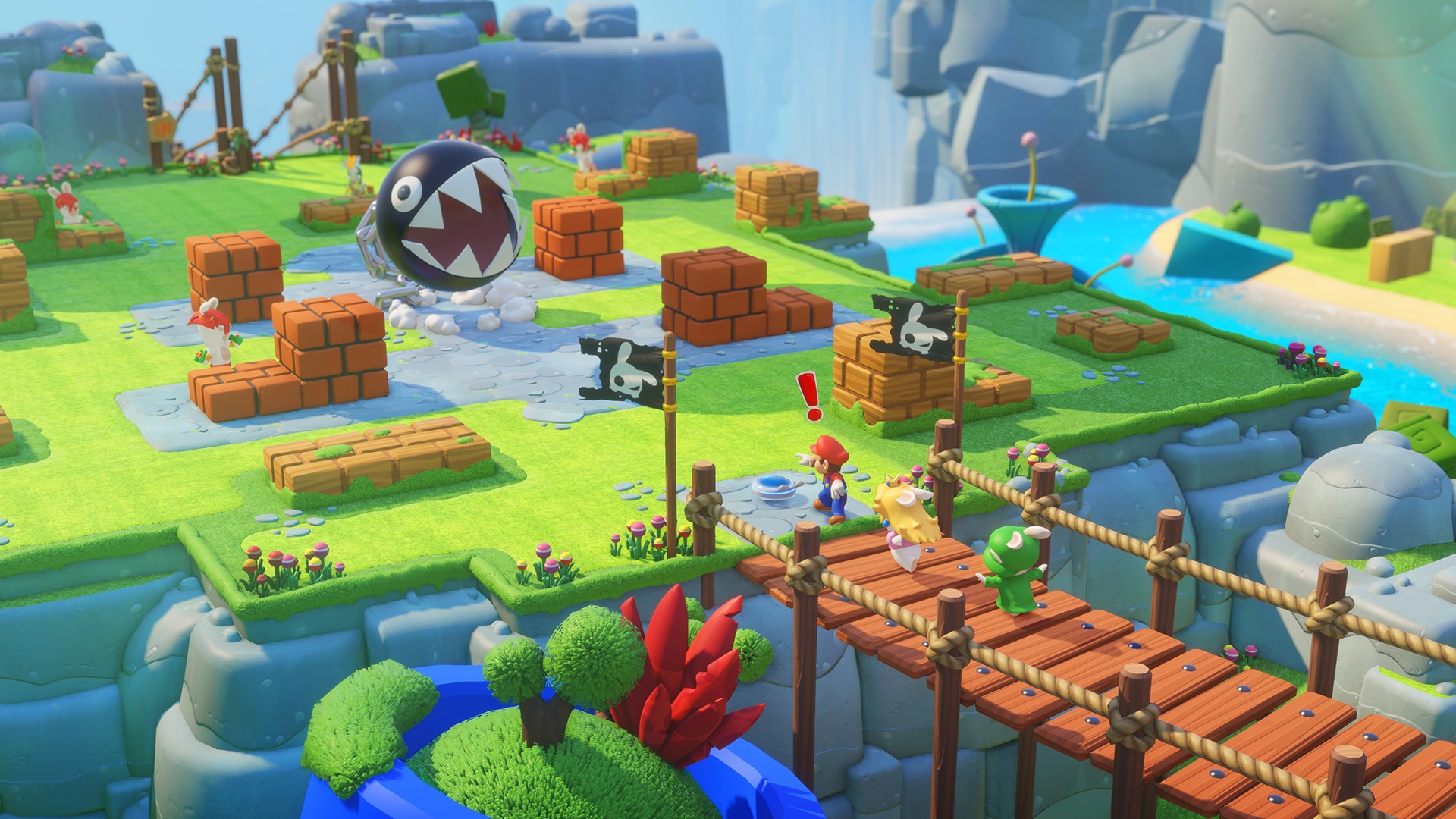 It is worth noting though that there is some slowdown here and there during certain parts of the game, usually while exploring more active environments. The soundtrack for the series is also fitting with the theme of the game as it blends a number of tunes together to fit the strange scenarios players will come across.

Many people wondered just how this crossover would turn out as it not only took two unique properties and merged them together but combined this merger with a unique tactical element that even fewer saw coming but not only has Ubisoft managed to combine this strange mixture into a great game with plenty of unique mechanics that helps it stand on its own but also one with a lighthearted sense of humor and a satisfying enough story that ties things together. With enough challenge to satisfying fans of tactical games and more than enough charm and options for newcomers to the genre that are fans of the Mario series, Mario + Rabbids Kingdom Battle more than lives up to the Nintendo brand.

With enough challenge and unique enough mechanics to satisfying tactics fans and plenty of charm and options to appeal to fans of both brands, Mario + Rabbids Kingdom Battle proves that even as outlandish as a concept may sound, it can become an amazing game more than worthy of your time.
9