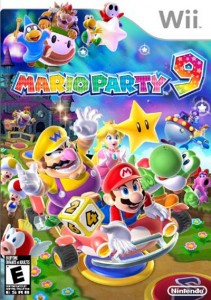 Of Mario’s various ventures, the Mario Party series is perhaps the most quickly dismissed amongst gamers. Announced very quietly at E3 2011, Mario Party 9 was lost amongst some huge titles, and to many, it will probably seem like a pointless iteration of the series. On a console notorious for mini-game compilations, how relevant can yet another party game be?

Nintendo take care of their first-party franchises, and Mario Party 9 is a lot more fun – and more innovative – than you might expect. 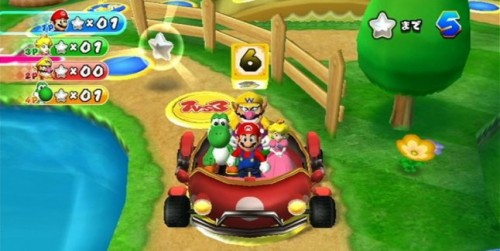 There’s almost no story, but in games like this there’s no need for one. The game is framed by something about Bowser stealing the stars out of the night sky, and carelessly leaving them in easy reach of our heroes. Whatever.

No, Mario Party 9 is all about frantic multiplayer fun, spread across over 80 co-operative and competitive mini-games that focus on skill, strategy, and luck, all wrapped up in an interactive board game.

The ninth iteration of a franchise (and that’s not including handheld versions) could reasonably be expected to do nothing more than polish the formula, upgrade the visuals and throw in a few gimmicks. Mario Party 9 actually shakes things up a fair bit, changing key elements that have remained unaltered since the first game.

Play still resembles a board game, as players roll dice to move around a path, land on spaces with various consequences, and regularly partake in crazy mini-games.

However, gone is the dollar/cent relationship between stars and coins: this time players simply compete for “Mini Stars”, picked up at certain points along the path or won in mini-games. 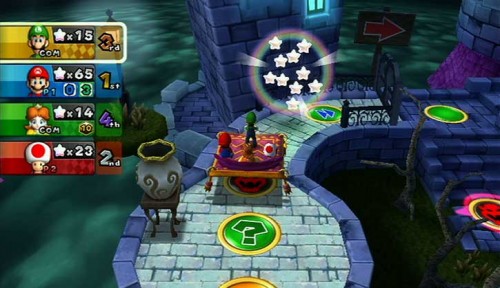 But the real game-changer here is that each player no longer makes their own way around the board: all four travel together, taking turns driving a vehicle. Players of earlier Mario Party games might be sceptical of how this works – including myself at first. Much of the series’ gameplay revolves around racing each other to a certain point, and sabotaging each other’s efforts based on relative location. How could this work when you’re always at the same spot as your opponents?

While travelling together does promote a higher degree of co-operation than in previous games, there’s no shortage of ways to troll each other. It just works differently. Having each player take turns at determining the direction  and distance everyone will travel encourages competition, as players try to achieve conflicting goals at each other’s expense. Say there are Mini Stars on the road ahead, but you won’t reach them on your turn. Rather than continuing that way and allowing an opponent to claim the prize, you choose to turn left, down a more punishing path, forcing the next player to deal with the consequences.

Designed for this type of scenario, the boards allow for strategy to play a greater role than pure dumb luck. As such, the boards are livelier than ever, with regular events and mini-games triggered from certain spaces. 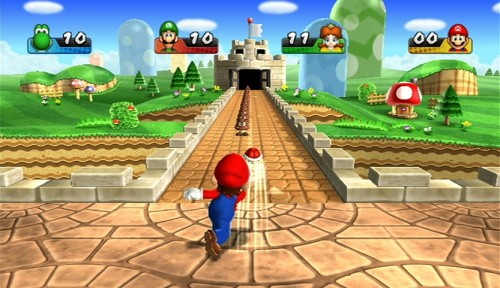 And that’s really the focus of the package: the mini-games. This time around, more than 80 different activities have been crammed into the game, and generally, they’re more enjoyable than the standard Mario Party fare. That’s not a criticism on previous games, but a compliment to this one – whether players are working together or duking it out, it’s never dull.

Whether you’re fighting to push each other into lava, dodging Bullet Bills, bowling for Goombas, Searching for Toad, counting characters, or just racing in classic Mario platformer style, the games are basic at first glance, but often hide a surprising depth beneath the surface. Skill, strategy and chance all have their place.

The mini-games you play are no longer dictated by the spaces each player lands on. You don’t even play a game after every player has had a turn any more. Instead, specific spaces will trigger free-for-all, team, 1 vs 3, or battle mini-games. Competing against or cooperating with other players will vary depending on the game, so sometimes it may be necessary (in our household, at least) to take a dive in a game, to ensure a particularly disliked opponent doesn’t score any higher.

One of the new ways of encouraging cooperation is to have all four players team up to take down a classic Mario enemy. These Boss fights are triggered at the halfway and endpoint of each board, and are among the most fun mini-games on offer. They’re structured as an interesting middle-ground between competition and cooperation:  players scramble for the same goal of reducing the boss’ health bar, with more stars awarded at the end to players who deal more damage or deliver the final blow. 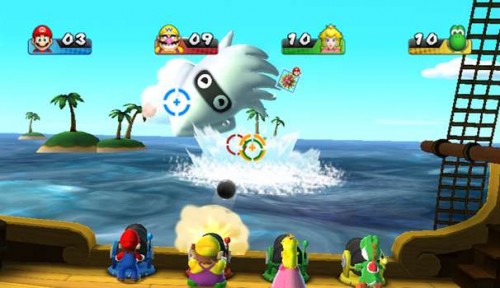 Interestingly, there’s less of a focus on Wii remote “waggle” than in Mario Party 8. Many games will simply use basic movements, have you point at the screen, or turn it sideways to use as a classic controller. With the gimmick of motion controls relegated to the background, the gameplay is allowed to shine. Where it’s used, motion works well, but it isn’t shoehorned into every mini-game.

The game can be played on your own, but that’s not the focus here. I tried single-player, out of necessity for this review, and found it quite dull. No, this is a game best played with friends in the same room.

The multiplayer Party mode, which is essentially what I’ve described above, is the meat of the game, but there are other modes. Solo play has you play through each board with three AI-controlled opponents – one of which is a minion of Bowser. If that character wins, you must replay the board to proceed to the next one.

You can freely play any of the mini-games, or use wins to decide outcomes in other meta-games. There’s a bingo variant, and an interesting tetris-like game, that has the winner getting first pick of blocks, arranged to complete a square grid before your opponents complete theirs.

The game has the standard colourful Mario visual style, with detailed character models and environments that invoke memories of previous adventures through the Mushroom Kingdom.

It looks pretty good, but with the usual qualifier “for a Wii game”. It won’t blow away anyone used to HD visuals, but the graphics perform well to vividly present the Mario universe. Of particular note are the character animations, which give a cartoony fluidity to their movements and add a whole lot of character. 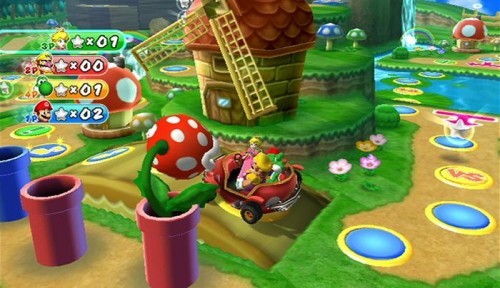 That sense of character is only improved by Charles Martinet’s efforts giving voices to half the cast. The various grunts, cries, catchphrases and cheers present the characters with their own identity, even if they all perform equally on the playing field.

Every character, enemy, pickup, and setting in Mario games have their own iconic sound effects, and as usual, these are all present and accounted for. The pleasant “Ding!” of collecting coins, the satisfying “Plonk” of hitting a Goomba with a shell, the “growing” sound when a mushroom appears; the sound effects are as much a part of the experience as the iconic look of the items and characters.

Mario Party 9 also upholds the tradition of remixing classic Mario tunes: there are several great new versions of the Overworld and Underworld themes from the original Super Mario Bros – pieces of music synonymous not only with Mario, but the entire medium of video games. 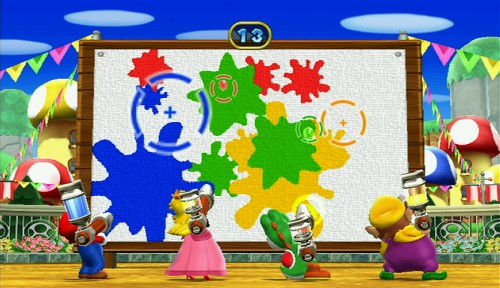 Mario Party 9 will probably fall under the radar for many players, but on a console notorious for shovelware mini-game compilations, Nintendo once again prove that they are masters of their own first-party domain.

There are few games on the Wii – or any platform, really – that foster frantic, same-room multiplayer quite so well. You know what you’re in for, but there are enough changes to warrant another go of the series. Get a few mates together with some drinks, ignore your prejudices and just have some fun.