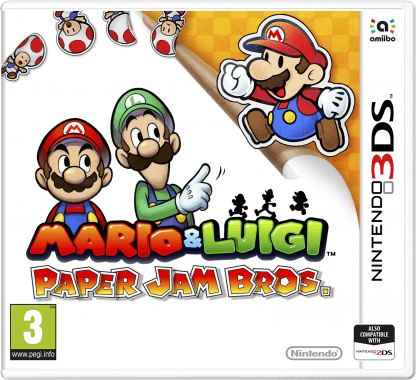 Mario & Luigi Paper Jam Bros. could be seen as a classic TV crossover, mixing together two of Nintendo’s most loved RPG franchises. This is the fifth entry in the well received Mario & Luigi RPG series which started back on the Game Boy Advance in 2003 and is definitely a sequel to that series as opposed to a true Paper Mario game, however the series have their obvious similarities. Does the addition of Paper Mario make a good series even better or should these two worlds have never met? Read on for our full review. 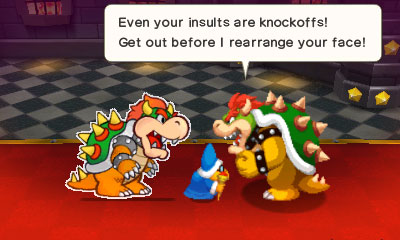 Luigi in all his intelligence manages to knock over a book filled with the contents of the Paper Mario series. The book opens up and all the living characters and even some of the world manage to spill into the ‘real world’ of Mario & Luigi, meaning we now have two of Mario, two  of Peach and most important to the plot, two Bowsers! If I am remembering correctly this is the first time characters in the Mario universe have ever met themselves and it has some great results, particularly the two Bowsers. There’s a lot of self aware back and forth that borders on breaking the fourth wall and most of it is clever and pretty funny.

Unfortunately, having two of everything does little to change the simple Mario story line here. Both Bowser’s steal both Peach’s and two Mario’s (plus Luigi, and I won’t spoil what Paper Luigi is up to) head to Bowser’s Castle to defeat them. It’s still an enjoyable adventure however and the familiar characters and interactions between both friend and foe alike deliver that sense of nostalgia the Mario series now likes to ride on. If you aren’t a fan of the story or are just a quick reader, you can hold down the R button which speeds up both text and cutscene in what is a feature I’m sure some people would like to see implemented into other games as well. 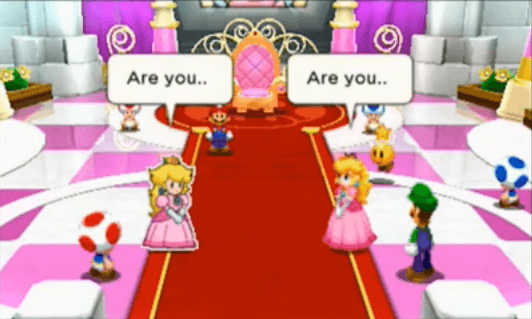 The way tutorial’s are handled here is also excellent. Every tutorial raises the question if you would like to skip it. This means expert players or those who think the mechanic trying to be taught will be simple enough can simply skip it and refer to the ever present guide book should they get stuck. When you do opt to listen to a tutorial, there is normally a bit of humour involved such as stopping enemies in their tracks so that your star helper can explain something to you. Like the cutscene speed up function I mentioned above this is another thing I’d love to see implemented in more games.

Mario & Luigi Paper Jam Bros. features two main types of gameplay, wandering around the over world and the battles. The over world is very typical RPG in nature. You run around, talk to NPC’s, visit shops and explore and re-explore all areas of the map while enemies walk around that can be hit with a pre-emptive strike for extra damage or ignored if you wish to avoid a fight. Like the battle system which I’ll go into more detail about below, it’s a familiar but fun experience. 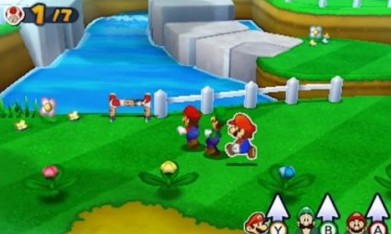 I will say it does take a little time to get used to controlling all three characters at once, particularly where jumping is concerned as you have to learn to press Y, B and A at the same time. This mechanic does work itself very well into some fun mini games which are scattered around the over world and the battle system as well, which makes the addition of Paper Mario a welcome one.

There are also a variety of side quests you can complete over your 25 hour or so journey through the Mushroom Kingdom. Not all the side quests are a hit though, it wasn’t long before I got tired of the Finding Toad quest, despite the different locations and smart hiding techniques of the Paper Toad’s. There are a few good Toad quests that mix it up with puzzles and other tricks, but a lot of them seem to be either finding Toad’s or chasing them down. 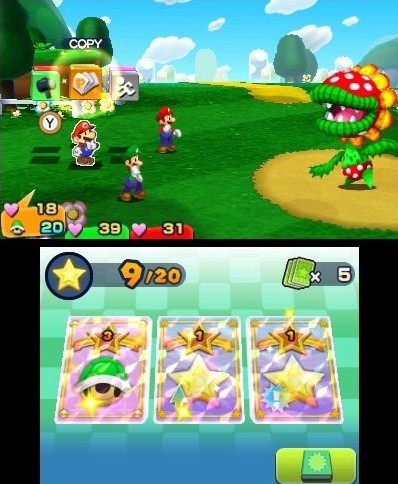 Now for the main reason I am really enjoying this game, the battles, which are simple yet brilliant. I had only played the Mario & Luigi series briefly before but I am a big fan of the first two Paper Mario games and what I played for the most part was very similar to the turn based battles from those titles. On your turn with each of the three main characters you select some form of attack, use an item or a support ability and on your opponents turn you attempt to dodge their attacks. Each enemy is different including the paper version of the same enemy, so knowing what attack is most effective is a big part of securing victory for your trio.

The variety in the attacks and the rewarding real time element are what makes the battles so much fun. Each character has a basic jump and hammer attack, while Mario & Luigi have unique Bros. attacks and Paper Mario has the ability to copy himself making his attacks more powerful while his copies are still around. There are also Trio Attacks which are kind of like Bros. attacks but more powerful. Timing a jump perfectly or dodging an opponents attack is rewarding each and every time both visually and because you deal extra damage. 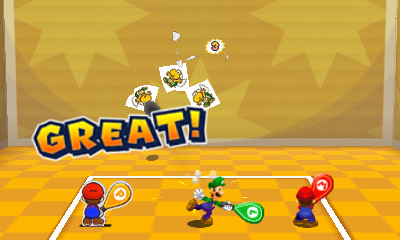 As you progress in the story you unlock battle cards which are another nice compliment to the battle system. These battle cards all have different effects and you have to earn their use which stops them from being overpowered . Add to this each character’s stats that increase upon level up and the different gear they can equip which have even more variety in their effects and the game really opens up to let you play how you want to in what is an inviting and familiar, yet expansive RPG.

A small part of the game but one that comes up just enough to note is the real time paper craft Battles. Where you pilot a giant paper craft character against a paper craft enemy. These just didn’t hit the spot for me with their overly simplistic controls and mechanics. For some reason your abilities are tied to a meter as well, which means if you run out of energy you have to recharge at a certain spot which forces you to play a ridiculously easy rhythm mini game to refuel. Like the Toad quests there is some variety here with different paper craft characters to pilot and fight which vary mildly, but it wasn’t enough to stop me groaning as I approached a paper craft boss. 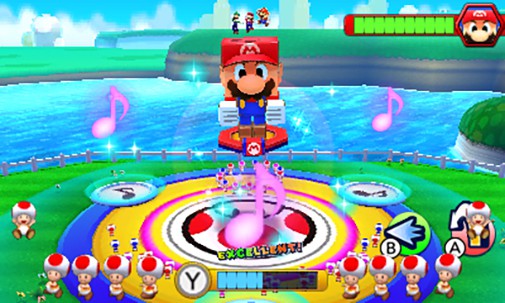 I was very impressed by the visuals of the game with the limitations of the 3DS. The 3D sprite look from Mario & Luigi and the paper visuals from Paper Mario meld surprisingly well and are represented faithfully to their respective series. In typical Mario fashion, the game is bright and colourful and has a variety of different world types for you to explore.

The variety of animations that each character had, particularly the three main characters is fantastic. The game just oozes charm and polish. For instance, if Mario faints but Luigi is still alive Mario doesn’t simply fade off the battlefield but Luigi will run over to Mario, pick him and then help him avoid the incoming attack. Developers AlphaDream could have taken the easy way out here but they didn’t and that little scene and others like it put a smile on my face. 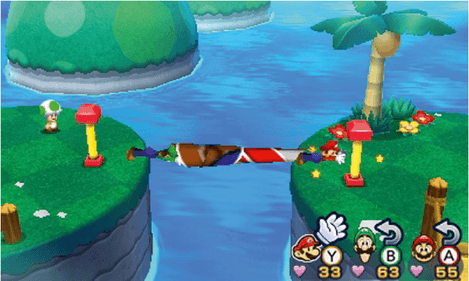 The way 3D is used here actually tempted me to play with the 3D on for a while which is something I never do on my original 3DS XL. The depth of field works really well in conjunction with the visuals and can aid in getting the timing for certain attacks down in the midst of battle. If I had a New 3DS with improved 3D effect I would definitely be playing with it turned on the entire time.

Like the visuals the audio will also feel familiar to fans of the series. For the most part the soundtrack is cheerful and happy but is appropriately epic when it needs to be, especially when Bowser becomes involved. Mario and Luigi both speaks some sort of strange gibberish in this game while Peach speaks in proper English for short sentences which is strange but most likely done for comedic effect. All your other classic sounds from throwing fire balls to Bowser’s roar are here and just as recognisable as the characters. Whoever was in charge here has done a great job with their sound design here which adds to the story and the battles to deliver a complete experience. 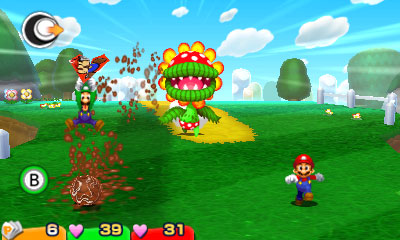 Mario & Luigi Paper Jam Bros. is a fantastic addition to the Mario & Luigi franchise. All the new elements courtesy of the Paper Mario Universe open plenty of new opportunities for story and gameplay which, for the most part, this game really capitalizes on.  If you’re a fan of RPG’s then all the staples are here and implemented very well and as usual for a Nintendo title the visual and audio design is of the highest quality. Not all aspects of the gameplay are going to appeal to everyone and the story perhaps could have done more to deviate from a traditional Nintendo title, but the witty dialogue and fun battle system give these minor issues a pass. Mario & Luigi Paper Jam is an excellent time whether you’re a fan of the series or simpler RPG’s in general.