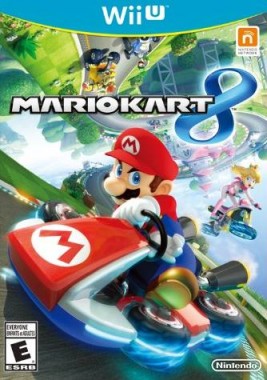 Overview
Nintendo have come a long way during the past 30 years. Mario has also come a long way as well, starting as a simple mascot from a platformer and evolving into something more special, with loads of spin-offs that each take the same universe and dive into other genres. Back in 1992, Nintendo strapped the plumber into the drivers seat for Super Mario Kart, and racing titles were never the same. These days, a Mario Kart installment typically sells more than the standard platformers we see from the franchise, which makes the Wii U’s Mario Kart 8 one of the most important releases in history. With new visuals, a blend of old and new elements, and the same gameplay attached, does Mario Kart 8 set the mark for the console, or is this racer one to pass up? Let’s find out.

Gameplay
I won’t sugarcoat it. Mario Kart 7 for the 3DS was good, but played it completely safe. We enjoyed the new features such as the in-air and underwater additions, but truthfully – the game felt like it was done before, and kind of left the more hardcore audience wanting more. Mario Kart 8 in many ways however takes notes from Super Mario 3D World, taking all of those new ideas captured in the portable version and expands upon them entirely, creating the most unforgettable Mario Kart release to date. 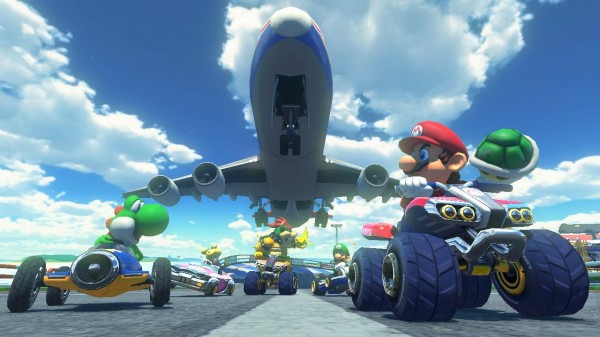 So what is new this time around? Well, the first thing players will notice are the tracks. Each location features ramps and hoops that can allow the player to partake in some anti-gravity kart racing. At first, this seems like something that wouldn’t change much at all, as its just a loop. In some ways, that is true, as the loops and riding on walls doesn’t redefine the game. When you add in the hang-gliding and other fare however, it brings a huge burst of fresh air that not only makes things more fluid, but finally shows some intuitive track design, which is something this franchise has needed for years.

Imagine you are riding on a track and see a blue ramp that leads you to hop up and cruise alongside a wall. With boosts planted in place, the player can capitalize on speed before launching into the air, where they can then instantly glide and get right back on the ground without missing a beat. Whether it be in water or any other terrain, this is the type of fluid gameplay that Mario Kart 8 delivers consistently, making races more exciting than ever while keeping the polish one would expect with a first party Nintendo release. 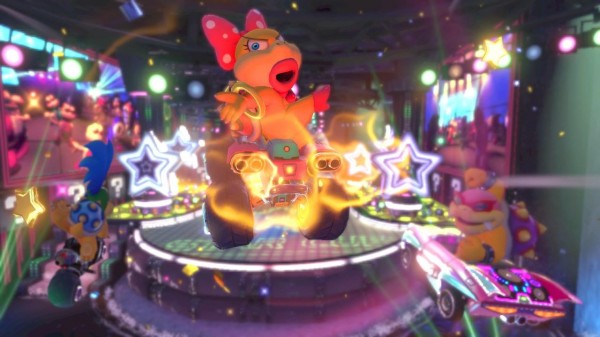 Overall, there are 32 tracks within the game. Sixteen are brand new and I must say, quite wonderful to put it lightly. Tracks such as Mario Kart Stadium start the game out at a high point, with scenic routes that capture a city atmosphere, while others like Sunshine Airport bring a flavor of nostalgia, capturing past worlds to perfection while allowing us to revisit the locales in a brand new way. Like every racer, the favorites within are going to come down to preference. There are no speed bumps in terms of quality, but I did feel a few tracks were a tad too cluttered with obstacles that interfered with speed. Yeah, the point is to be sharp and dodge, but when you have twelve participants in a race that are obtaining frequent items, it chaos builds quickly and the last thing the player will want to see is a giant pit ready to swallow them up as they jump out of harm’s way. 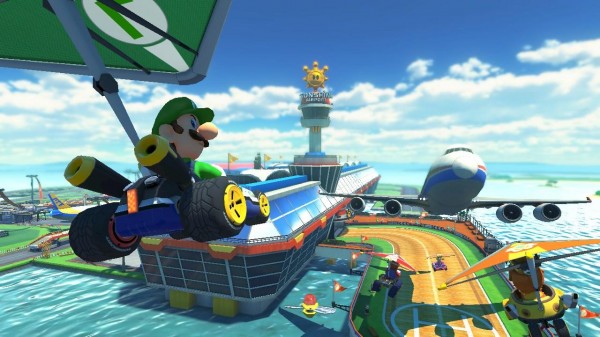 The other sixteen tracks are not new locations, but have been rebuilt from the ground up to fit with these new mechanics and gameplay stylings. At least one track has been put in from other installments, such as Moo Moo Meadows from the Wii version, Dry Dry Desert from Double Dash, and DK Jungle from Mario Kart 7, just to name a few. The recreations are breathtaking at times, as seeing a course as old as Donut Plains 3 remade with fresh components and such a large scope changes the way that classic race is won entirely. Add in the 30 racers overall and you have a fantastic smorgasbord of fresh races spanning generations of Mario Kart titles. 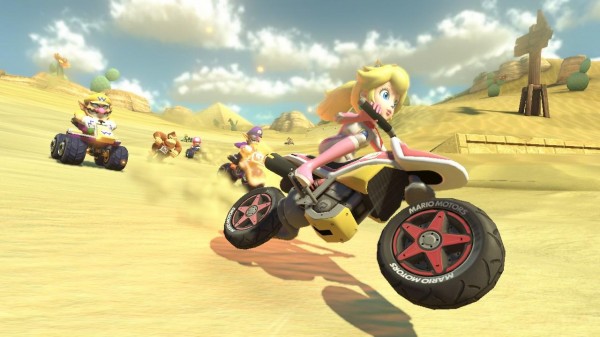 Items are usually the hit or miss part of a Mario Kart game. That really isn’t any different here. While most of the classics are back such as the red and green shells, star, and so on – the blue shell has also rose up again to remind us that some parts of Mario Kart simply rely on luck. This item is still unavoidable and seems to hit at the worse possible time. Now if it were block-able (there is a rare item that can block it, but is extremely rare) or varied on choosing a target (outside of first place), I would complain a lot less – but the blue shell to myself is nothing more than a way to punish victory. It also seems that the top players are only awarded boosts or very weak items yet again, but there is a bit more balance in that compared to Mario Kart 7, which is a plus. Coins in my opinion stand as the most important collectible however, as each coin out of ten obtained boosts speed dramatically, and can allow a player having a bad lap to catch up 11 spots in no time.

As far as modes go, the difficulty bases 50cc, 100cc, and 150cc Grand Prix options are back without much change outside of rewards, along with Time Trial Mode and Battles. Battle Mode has been completely retooled as well, and now has the player run along a normal track with the option of going in any direction to knock off the opponent’s three balloons. Sure, it works and can be fun – but arenas were more fit for the mode and not seeing them in this installment almost makes it seem that Nintendo simply ran out of time. While that is one of the game’s only sour notes, the online mode allows for up to two players to take to the servers and participate in battles and standard races. Mario Kart TV is also a great new feature that allows players to re-visit, edit, share intense bouts with others. Again, this sounds like something simple, but the presentation factor makes it feel much greater as you see all of the Miis come together to cheer on the tape. 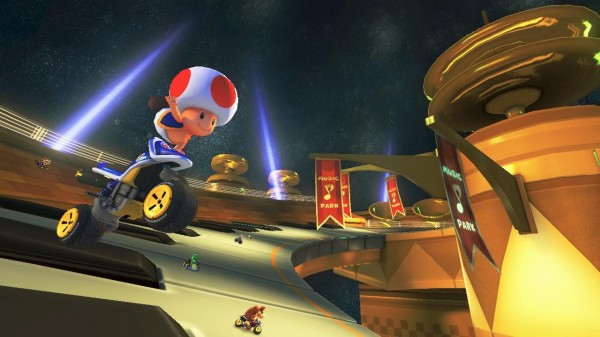 Couch multiplayer is of course back as well. Many are going to argue about the Gamepad’s use here, as split-screen is still split-screen on the device as well as the television. The thing is, I could have cared less as when I played, everyone used Wiimotes aside from one person, and not one complaint was made the entire session. The Gamepad is great for single player however, as the player can change the screen from a horn to a map, or simply put the action on their screen entirely with a couple drags and taps.

Visuals
Where do I even begin? When I reviewed Super Mario 3D World, I bragged about how great Mario and company looked in HD. If I would have played this first however, even that would have felt like a downgrade compared to how utterly phenomenal Mario Kart 8 is visually. Every single location explodes with color and smooth textures, with animations running fluidly at 60 frames per second. Not only that, but these worlds are incredibly detailed with so much happening in the background that I had to play many races several times just to take in a portion of the lively atmospheres present. Everything is fluid, the models look incredible, and the tracks are pure eye candy with substance attached. This is the best looking title to ever hit a Nintendo platform thus far, and sets a new high standard for what the Wii U can do visually. 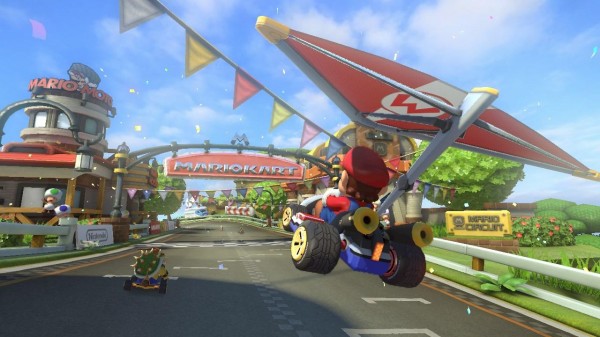 Audio
In this area, I will start with the voicework, as in my opinion it is an important factor as hearing your opponents (I hate you Yoshi) gives you a sense of who is coming up on your tail and who is next in line to beat. With baby Mario, baby Luigi, baby Peach, and baby Rosalina (way too many babies), it can be a bit confusing of which one is next. The same goes for all of the Koopalings, but that is a small gripe as they at least have minor differences and are find additions to the roster, even if I miss a few of the omitted past faces. The soundtrack however is simply divine. From sweet and calming tunes rushing out of a water based Dolphin Shoals to the more intense and nearly dubstep beats of Electrodome, the music is highly varied and enjoyable within Mario Kart 8, giving us some great background to drown out those loud motors.

Overall
Mario Kart 8 is the system seller for the Wii U. There is no other way to put it. While it tends to tread in familiar waters a tad too much with items and balance, the crisp and outstanding visuals and anti-gravity gimmick have redefined the franchise entirely, making it the most refreshing entry to date. Nintendo didn’t have to go out of their way to recreate Mario Kart to be honest as lets face it, this game is going to perform fine on whatever platform it is placed on based its legacy alone. Nintendo however have needed to show that the Wii U is not a force to be reckoned with and is not the same as its predecessor however, and no game is more proof of that than Mario Kart 8.