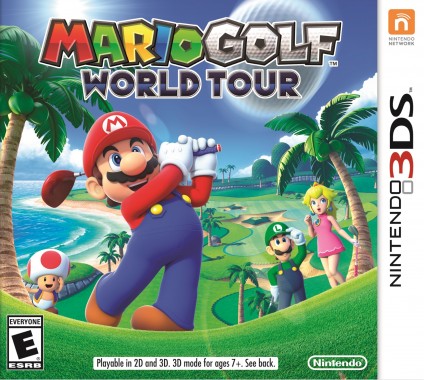 It’s been over 10 years since Mario and crew picked up a set of clubs and took to the Mushroom Kingdom for a good old fashioned game of Golf. Camelot is back on the green with their latest Mario Golf series entry, Mario Golf: World Tour for the Nintendo 3DS. The duo of Camelot and Nintendo has always produced something special in the past, from the original Mario Tennis and Mario Golf (and their respective Gamecube follow ups) to the acclaimed Golden Sun RPG series. Have they teed up another successful entry with World Tour, or should Camelot pack up their 9 Iron and head back to the club house? Read on for our full review.

There isn’t much here in terms of story which will probably disappoint those looking for the more RPG experience presented in the Game Boy Advance predecessor Mario Golf: Advanced Tour. You enter the esteemed Castle Club as your Mii and basically try to win the Triple Crown by beating your opponents in the three 18 hole standard courses. In between victories the main cast get together to celebrate your victory and all offer a typical comment you would expect from them. It’s pretty cool to see the likes of Bowser and Mario congratulate you on your golfing achievements and the atmosphere makes this game Mario Golf instead of just Golf. The ‘story’ is unfortunately over quickly and there isn’t much reply value in Castle Club outside of the online tournaments and a few challenges to unlock some Mii outfits. While it is cool to interact with the Mario gang (the few times it happens), the mode doesn’t really have much purpose except to serve as a glorified menu to access the tournaments and shops, with alot of the rooms such as the gym and locker rooms existing just for the sake of it and not offering any unique challenges. The Castle Club definitely had alot of potential but has been heavily under utilised here and it’s sad more wasn’t done with it. 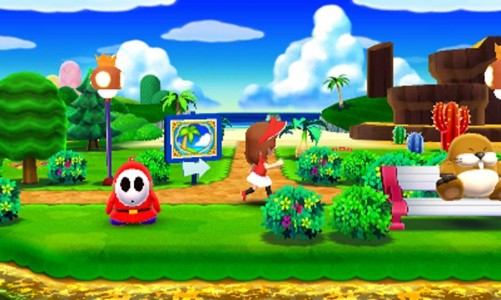 The game’s other mode (strangely titled ‘Quick Round’ Mario Golf) is where you will spend alot of your time once you complete the main story. There is alot to do in this mode with 100 challenges to complete (plus unlockable ones), local and online multiplayer and a heap of constantly changing online tournaments. The challenges bring great variety to the game and include tasks like shooting through rings and achieving par or trying to collect a certain amount of coins in 9 holes. More traditional challenges like beating a difficult A.I. opponent in a classic golf match help balance the crazyness with classic golfing action.

While I didn’t get a chance to test out the local multiplayer (which unfortunately doens’t have cart download play meaning everyone must have a copy of the game) the online multiplayer portion is terrific. You can easily join alrady created communities or create your own with specific rule sets like allowing items, allowing players to vote for their chosen course etc. The online is incredibly streamlined; you take your shot and if you complete the hole before your opponent, you then get to watch them finish up. It’s a great system and is much better than the old multiplayer way of waiting for your opponent to finish the hole before you can start. Another cool feature in online tournaments is the ability to see ghost data while you take your shot. This allows you to see how your shot compared to people who have previously completed the tournament. 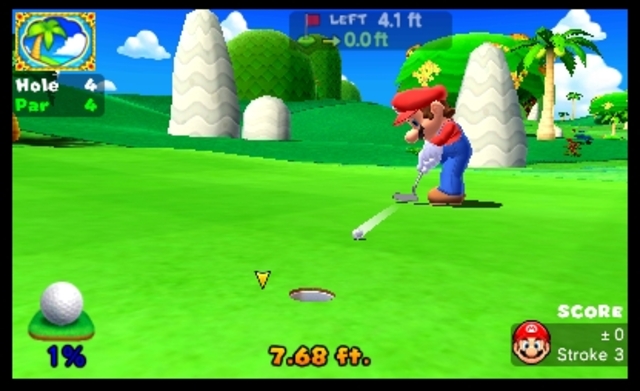 Strangely, accessing these game modes is another issue, as Mario Golf: World Tour features a very jarring menu structure. Tournaments are a perfect example of the poor design here. In the Castle Club, there is an entry floor where you can enter regional and worldwide tournaments. However, there are also more tournaments hidden away in the Mario Golf mode. Once you learn where everything is it’s not so much of a big deal, but it would have been nice if the menu system was more accessible so that we can get to the fantastic golf game play sooner.

Camelot has always offered a satisfying and well polished golfing experience and Mario Golf: World Tour continues this tradition. If you wanted this game to play like the two previous console Mario Golf titles you will be pleased, as the actual gameplay has really not changed at all. The simple three tap method holds up strong here as you tap A (or the touch screen) to start your shot and A again when you’ve reach your desired power on the meter. If you’re on auto mode that’s it, but if you want a bit more control over where your ball lands then you can go manual and try to stop the meter right on the line to ensure a perfect shot that can have top spin, super top spin, backspin or super back spin applied to it, which can have a huge effect on where the ball lands. The system still holds up amazingly well here and there is still alot to consider before you even get to hitting the ball. Club selection, wind speed, what surface your ball lies on, obstacles, slopes and more all have to be considered so that you can get the ball going where you want it to. The one big difference made to the system is that you can’t change the impact point on the ball before you take you shot. This is now done while determing your shot’s power on the meter which can be alot to take in before you get used to it and also means you can no longer preview how the change in impact point will affect the balls trajectory. 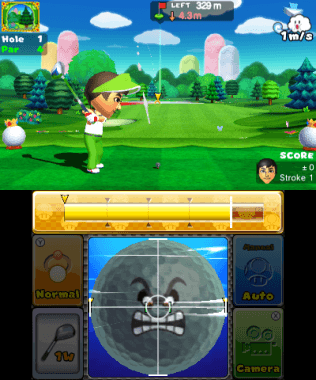 The controls are mostly intuitive but there is a small learning curve. At times when in camera mode it kind of feels like you are fighting with the grid to get it to go where you want as the d-pad controls left and right movement but you need to use the L and R buttons to move the trajectory back and forth as the d-pad up and down is mapped to changing the club selection. Practice makes perfect here and once you do adjust to the controls the golfing system offered here gives you alot of control over the ball and can be as rewarding as it is punishing when you make a mistake. One other small issue is with the putting where sometimes your character gets in the way of the view of the hole and are not made transparent enough for you to see through them. It happens often enough to be a nuisance and means you have to adjust the camera to get a better view of the hole.

Mario Golf: World Tour has also introduced a heap of items into the mix and they are all fun, varied and easy to use. Some of the more awesome item examples include the Bullet Bill which gives you a massive drive in a straight line unaffected by wind and the Ice Flower which creates a block of ice for your ball to land on when it is about to enter the water. The items open up new possabilities for how to tackle the courses and aid in extending the replay value. 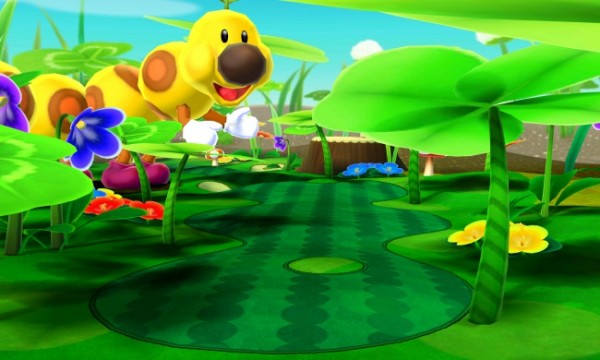 Visually the game is one of the best looking 3DS games we have seen with all the models looking on point and everything looking colourful, vibrant and lush. The courses are full of imagination and contain all the Mushroom Kingdom nuances that you would expect from Mushrooms to giant Wigglers and Goombas. Each character looks fantastic and all have different reactions to the score they achieve on a holes. For example if Mario hits a birdie he will grab a star and run around the course while Yoshi will do a massive flutter jump. They’re fun to watch and don’t really get too repetitive as you’re celebrating right alongside them as the sense of achievement is great right after sinking a long putt or hitting a chip in. One tiny gripe is that characters no longer have unique ball animations for a perfect shot like they did in previous games, but it’s nothing to cry about.

Another cool thing Camelot have included is the ability to collect a ton of cool Nintendo inspired outfits to collect for your Mii and you can mix and match these to form your own unique style. As this is a 3DS game we should mention the 3D effect and it’s hard to really say anything other than it’s there. It really doesn’t add anything to the game and if you’re like me and prefer playing with the 3D off then you won’t be missing out on anything or at a disadvantage against your opponents with the 3D turned on. All the in game cues and indicators are easy to follow when you are taking your shot and really assist you in nailing where you want the ball to go. 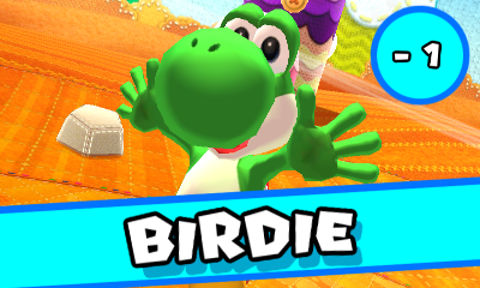 In terms of audio, all the sounds are great (especially nailing a perfect shot) and all the character voices you know and love are there (who can get tired of Mario saying Woohoo!). The music here is exactly what we have come to expect from a Camelot Mario Golf/Tennis soundtrack, which is by no means a negative as the tracks have an epic, regal sound that really fits the golfing atmosphere. There are also a few tracks thrown in to fit the respective Mario world courses, for example, Yoshi’s Lake course features music that sounds like it’s from Yoshi’s Story. On a whole, the soundtrack isn’t as catchy and doesn’t sound as grand as Toadstool Tour, but still fits the action well. That being said, the sound is not integral to the game or anything so if your one of those handheld gamers who prefer to play with the sound off you won’t be missing much.

If you’re looking for the sequel to 2003’s Mario Golf: Toadstool Tour then here it is. The perfect mix of satisfying, rewarding and challenging gameplay mixed with the bright and colourful visuals make this a hard title to pass up for the 3DS if you’ve ever been into the series or love the Mario sports titles. While the menu design could have been improved and the Castle Club mode was underwhelming, these short comings fail to take much away from the large amount of fun content and Nintendo charm offered within the game. With a constant flow of new tournaments to keep the online mode fresh and more courses and characters to come through somre fairly priced DLC, Mario Golf: World Tour is a definite winner.