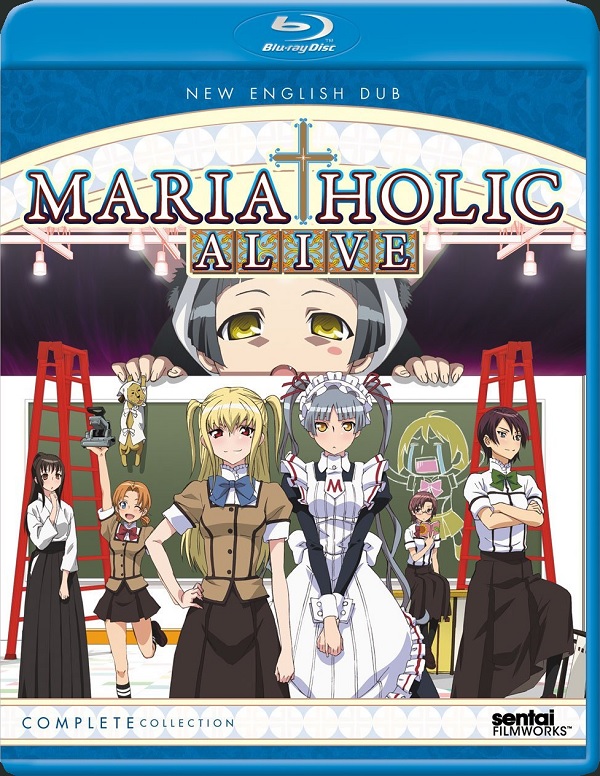 Overview
Anime where the main character is a pervert that has nosebleeds over anything lewd and gets lost in their own delusional fantasies are easy to find. However that main character is almost always a male, and Maria Holic thrived in its first season by showing how a perverted lesbian girl can be just as prone to nosebleeds and lewd thoughts and be rather hilarious because of it. Now that Sentai Filmworks has released Maria Holic Alive, the second season of the series, with a new English dub, is it worth continuing this story?

Story
For those unfamiliar with the series, Maria Holic follows a girl named Kanako Miyamae who has transferred into a private all-girls Christian school named Amenokisaki in order to find her true love similar to what her parents did at the academy when they were her age. The only problem is, unlike her mother and father, Kanako only has eyes for girls and now that she is at an all-girls high school, she has just entered a proverbial paradise. 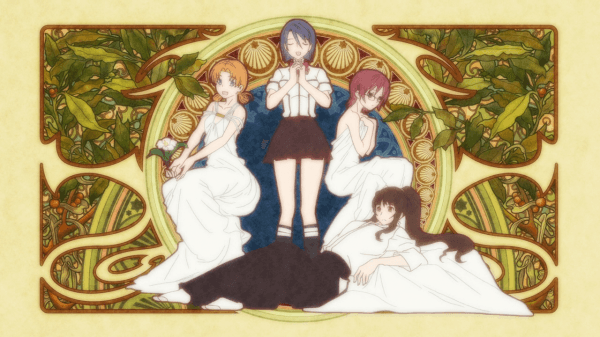 However that paradise quickly becomes a hell when she finds out that the most popular girl in the school and the previous headmaster’s granddaughter, Mariya, is actually a man in drag. Forced to keep Mariya’s secret and constantly watched by both the sadistic Mariya and his cold maid Matsurika, Kanako still manages to become friends with a number of girls at her school despite the fact that she always seems to be having nosebleeds everywhere and breaks out in hives anytime a man touches her.

Anyways, Maria Holic Alive takes place in a bit of an odd place thanks to some time shenanigans that seem to place the beginning of the season somewhere in the middle of the first season and continuing past the events that occurred at the pool involving Mariya and Shizu. Thanks to the way that the series places itself, and also simply due to the way everything unfolds, little has changed in the way this show is handled. 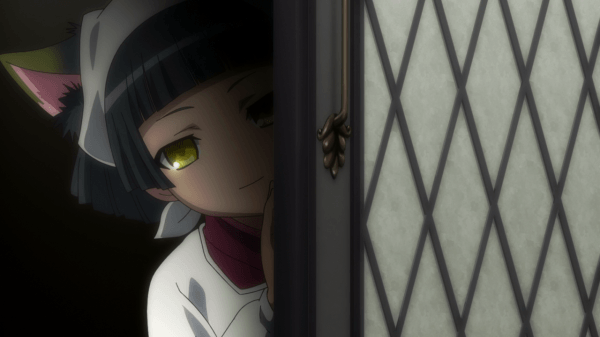 The story continues to follow Kanako as she interacts with her fellow classmates and has to deal with not only her own delusional thoughts and constant blood loss but also the constant torment from Mariya and Matsurika as well as constant misunderstandings with a male priest named Kanae who seems to always be struggling with possible feelings for the girls he comes across.

This pattern continues throughout the entire season, making Maria Holic Alive something of a random slice of life comedy with a perverted lesbian since there really is no semblance of an actual story being told here, though a few new characters are introduced in this second season. Even the whole rosary issue that was hinted at during season one is never followed up on, outside of a throwaway gag during the last episode. 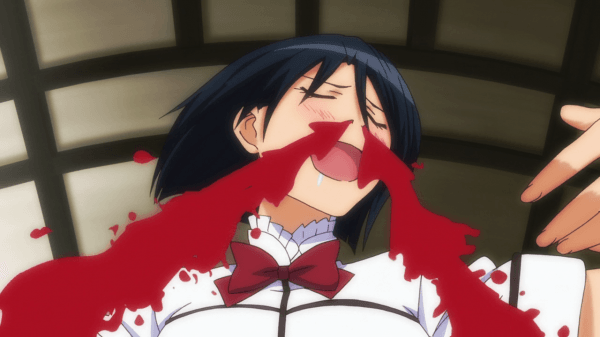 You know what though? This ends up being okay for the most part thanks to the amount of comedy and build-up many of the gags in Maria Holic Alive receive. All of the standard jokes from the past season return, such as Kanako’s fantasies and fountaining nosebleeds, but this time around there are a number of gags that end up being referenced a few episodes later, revisiting these jokes and often building upon them further.

It is often difficult for a comedy series to stay fresh during its second season, but Maria Holic Alive manages to do so by keeping all of the jokes that people loved from the first and building upon them. It is a shame unfortunately that any hint of story progression and even character development, although there is some of the latter, is left by the wayside to make room for all of the gags.

Visuals
Considering how Shaft handled the first season it would have been impossible for another studio to step in and take its place and as such Shaft has returned in Maria Holic Alive with all of their signature moves. All of the characters normal designs are nicely detailed with a lot of attention to detail included in most of the environments that characters spend time in. 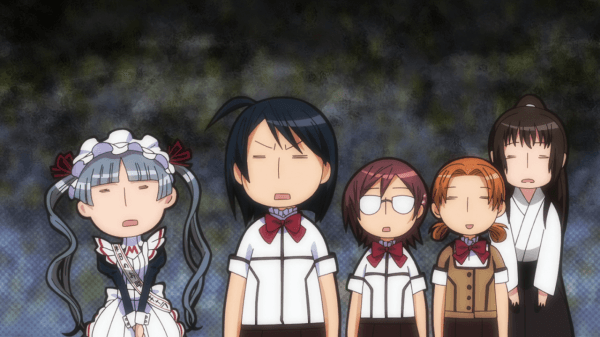 The constant shifting in art style remains the same as well, with many scenes being portrayed with characters looking extremely deformed and chibiized for comedic purposes and most of the fantasy sequences looking like shōjo artwork taken to such an extreme level that the characters barely look human. It is nice to note that Sentai Filmworks has done a great job with the amount of Japanese signs that appear in the show with everything from sound effects to side-text and various cultural notes to help viewers understand some of the more obscure references made in the show.

Audio
As with the first season, Sentai Filmworks has went back and revisited Maria Holic Alive and have given this release a complete English dub. The English voice actors all retain their roles from the first season and I am pleased to say that they have not lost a step working in this second season. Jessica Calvello and Monica Rial sound excellent when they are dealing with one another as Kanako and Mariya. Of course for those only looking for the Blu-ray upgrade, the Japanese voice track is also included. 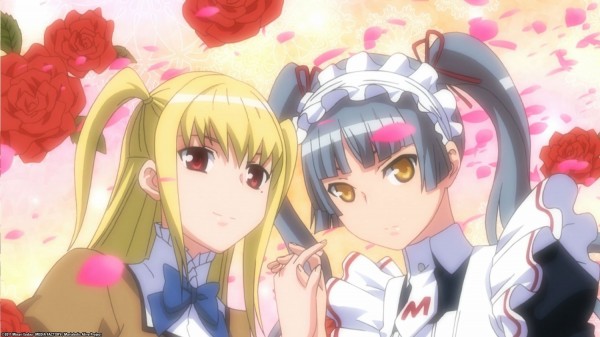 As for the background music, the odd nature of this series where it often flips from one tone to the next rapidly is impressively matched by the various pieces of background music in the show. There are a number of different opening themes in Maria Holic Alive, with two standalone songs for the first two episodes played for parody and amusements sake until the main opening song “Run Run Riru Ran Ran Rara” by Yuu Kobayashi, the Japanese voice actress for Mariya, takes over as a surprisingly enjoyable opening that rivals the opening from the first season. As for the ending theme, it is a bit more subdued with “Dounimo Tomaranai” by the Japanese voice actresses for Mariya, Kanako, and Matsurika singing the ending theme.

Extras
As far as bonus features go, the key inclusion with this release are commentary tracks for all twelve episodes from the original Japanese voice actors. This is then followed with some more standard inclusions such as trailers for other Sentai Filmworks anime, Japanese commercials, a clean version of the two comedy opening themes but oddly enough not the main opening theme, and a clean version of all of the different ending theme animations, with there being a slightly different ending animation for each episode.

Overall
Maria Holic Alive may skimp on any actual story progression and be rather scarce on character development, but it makes up for it with a large amount of comedy with a high rate of accuracy. While a few jokes may start to feel stale near the end, almost every gag, reference, or parody remains consistently funny all the way until the end. Now that Maria Holic Alive has an English dub and the already colorful and unique looking Shaft style has been released in Blu-ray, fans of comedy anime would be doing themselves a disservice to pass Maria Holic Alive up.