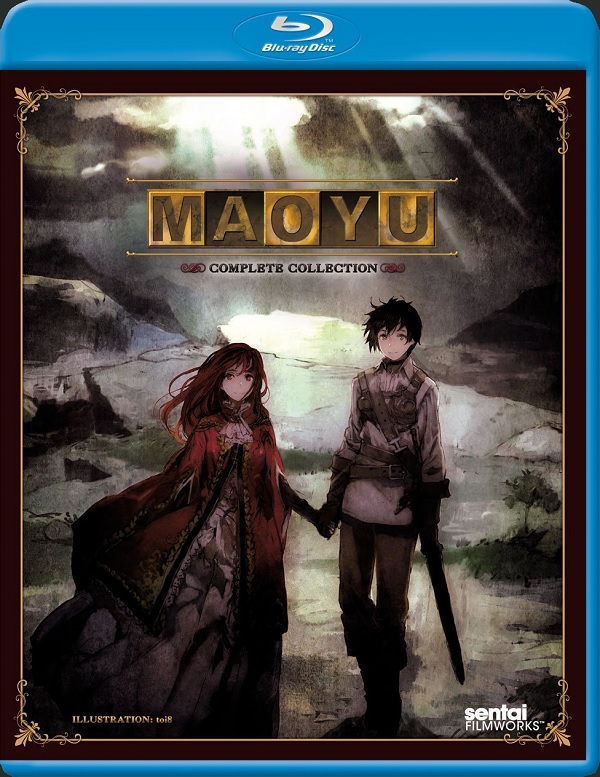 Overview
While many anime are action packed tales, romantic comedies with girls everywhere, dark twisting tales, mysteries full of twists, or simple fun for kids, there are also anime series that try to focus on a story of a different nature. Such was the case with Spice and Wolf, a series that focused on a man and a wolf deity with a heavy emphasis on economics. Now while Spice and Wolf focused on microeconomics, Maoyū Maō Yūsha, or simply called Maoyu in the West, is a series of a hero and a demon king but this time focused on macroeconomics. The question is, does Maoyu tell a story worth following?

Story
Humanity has been battling a long and bloody war against the demons with no clear victor in sight. Because of this never ending cycle of death, the humans have sent forth their Hero and his compatriots to drive into the heart of the Demon Realm and put an end to the Demon King. Not wanting to bring his allies into danger, Hero leaves one night and strikes out towards the Demon King’s castle like an arrow, ready for blood. 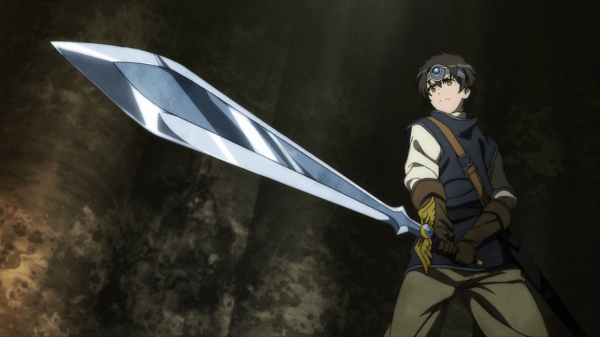 When he arrives at the castle, he is surprised to find that this Demon King is actually a Demon Queen and despite the fact that these two should be tearing each other apart, Demon Queen cordially welcomes him to her castle and declares her love for him, hoping that the two can work together rather than fight. Although Hero is unsure of her motivations, he soon learns that the that this war has went on for so long is due to how beneficial it is to both humans and demons, with each side not really wanting a true end to the war.

As such he relents to work alongside her, to see what lies beyond the war in a world where victory and defeat do not exist, but peace reigns. Taking the guise of a human called Crimson Scholar, Demon Queen and Hero hope to start influencing the world by tackling a number of issues on the human side of things, such as lack of food, low education levels, and dependency on war funds to stay alive. If it wasn’t clear already, Maoyu is far from your standard fantasy anime and it is one that will give viewers something to think about as they watch the series. 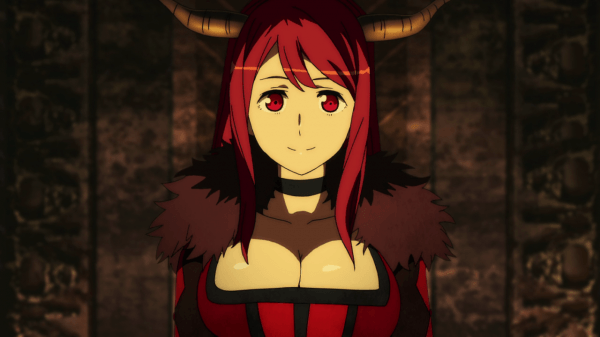 Now before we move on, it is worth noting that all of the characters in the story are actually named after their position, Hero is called Hero, Demon Queen is called Demon King or Crimson Scholar, and other characters such as Merchant, Big Sister Maid, Female Knight, etc. are all called as such. Speaking of those characters, that is another major part of Maoyu, the fact that although the overarching story follows the plans of Demon Queen and Hero, it takes time to focus on the side characters as well.

While a lot of characters grow under the tutelage of Crimson Scholar and then use their knowledge to help advance the world, no one’s rise in position compares to the story of Big Sister Maid and how she goes from being a serf who can do nothing but take orders and run from everything to a woman full of conviction in what it takes to be human. This all comes to a head during a poignant speech delivered at a pivotal point in the series that stays will stay with viewers long after they have finished watching the series. 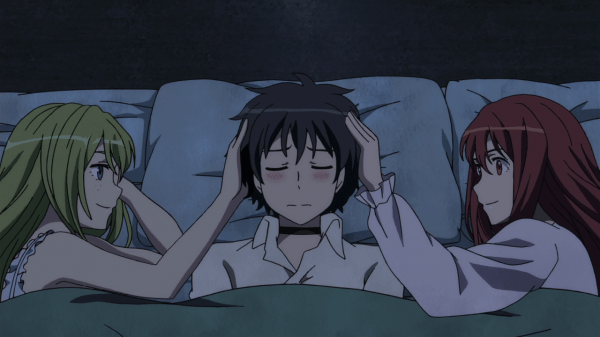 It is interesting to note that although there is a decent amount of action to be seen, the focus on a world full of magic, armored cavalry, and medieval weaponry is on developing said world instead of harming it. This means that although the series takes breaks here and there to create a budding romance between Demon Queen and Hero as well as establish Female Knight as a rival/co-lover, there are plenty of times where the story will involve political maneuvering, economic warfare, tariffs, insider trading, and more.

Things can get a bit too slow at times but those who are interesting in a slow but well told story such as this will be delighted in seeing Demon Queen’s plans come to fruition. Unfortunately because of the slow pace of the story and how grand the scheme is, a lot of things go unsaid and this becomes an issue later in the series when numerous developments occur one after another, likely in hopes of driving a second season, but feel leaves viewers feeling a bit let down as it feels like we are only getting half of the story here, especially since some major points are either gleaned over or simply left to be developed later on, which may never come.

Visuals
Maoyu is a series that has some very unusual looking artwork at times thanks to the way that the backgrounds and environments in the series are handled. The backgrounds have a unique textured look to them as if done with watercolors or something similar which gives the series an outstanding backdrop to place the more standard looking characters up against. 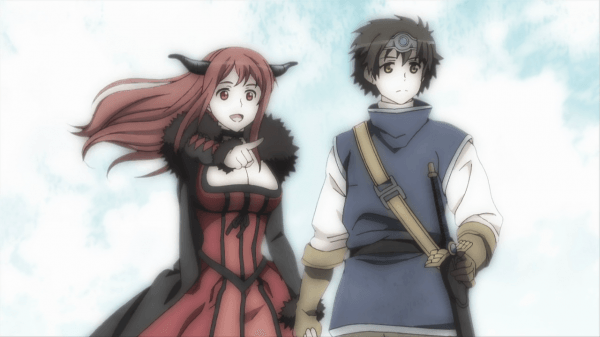 Considering the series is stylized after a medieval European setting, most of the architecture and clothing resembles such a timeframe with a fair amount of detail put into each aspect while the characters themselves are standard fair, though Demon Queen and Female Knight will probably be many viewers’ favorite characters. It is worth noting though that any time the series uses CG for large group shots, the CG is atrocious looking which makes the thankful that they aren’t used often.

Audio
It is unfortunate that Sentai Filmworks did not give Maoyu an English voice cast as it would likely have made some of the more complicated aspects of the series easier to tackle for those unfamiliar with the material or handling such a dialogue heavy series such as this. That being said, the voice work by the Japanese cast is handled very nicely with the Demon Queen, Female Knight and Female Mage’s personalities standing out the most. 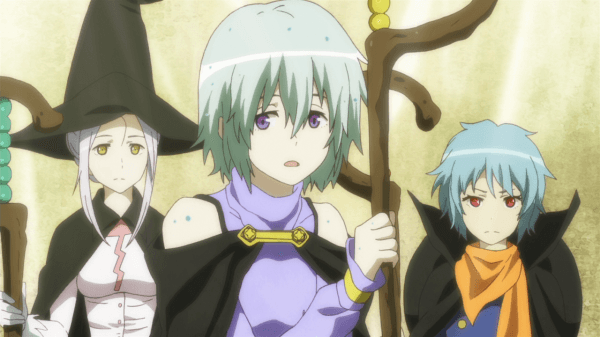 The background music for the series is fitting enough at times but does little to stand out, though it is worth noting that the opening theme “Mukaikaze” from Yohko is an underrated gem while the closing theme “Unknown Vision” by Akino Arai is a suitable closing theme with a fairy tale-like tone.

Extras
For Maoyu: Complete Collection’s release there are only a few bonus features on the disc and many of them are fairly standard. There are Japanese commercials, previews, and Blu-ray spots to advertise the show, a clip advertising the social card game made from Maoyu in Japan, a clean version of the amazing opening theme as well as the simpler ending theme, disc credits, and trailers for other Sentai Filmworks anime.

Overall
The series seemed to pass under the radar of Western publishers for a while and it is great to see that Sentai Filmworks took the chance with the somewhat unconventional series. Although it hurt by how large and detailed the scope is, the story of Maoyu is one that is populated by a likable and interesting cast of characters with an incredible focus on building up a fantasy world that is handled in a way that is far from the norm. Maoyu may be a series that falters near the end and leaves things hanging for a second season, but it is a series with plenty to offer for those willing to take the chance.