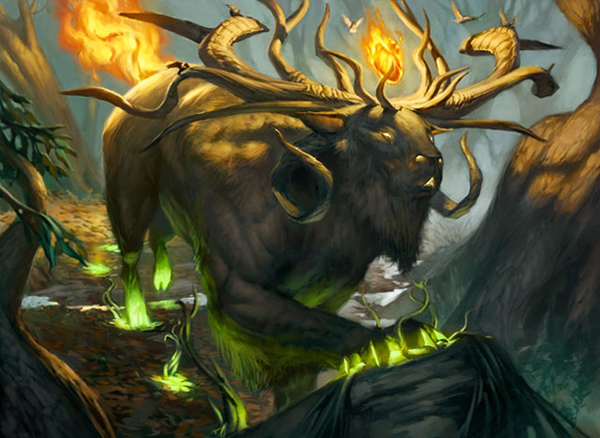 Nature of the Beast Commander Deck

Magic: The Gathering’s Commander format (also known as EDH) has blown up massively in the last few years. Taking the core rules of Magic, and slightly tweaking the rules really opens up the game to a whole world of deck types, crazy combos and otherwise useless cards seeing a tonne of play. However, Commander can be very daunting to get into, especially since they require a 100 card deck, so Wizards have constructed some of their own to get new players in on the action.

NOTE: When it comes to Magic: The Gathering, I primarily play Standard and Limited formats, so I am not as fully versed at the intricacies and nuances of Commander as some other players. If you disagree with anything I say in this review, please let me know in the comments below.

Nature of the Beast is one of this year’s five Commander Decks. It is a 100 card pre built deck that is red/green/white aligned. The focus here is on big beasts, and making them bigger to simply walk over your opponent with sheer strength. The best thing about this deck is how drastically the play style changes depending on which of the three included Commanders you use. Regardless, the deck revolves around building an army of behemoths and simply demolishing everyone in your path.

The primary Commander of this deck is Marath, Will of the Wild. Lets take a quick look at him: 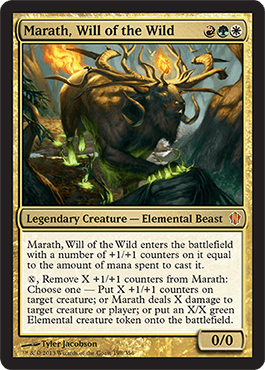 So ok that’s a lot of writing, but lets break it down. Firstly he is a 0/0 but gains a +1/+1 counter for the amount of mana used to cast him. Already we can see that he is simply MADE for this format. Every time he dies and you recast him, he will get stronger. While this is great, Marath truly shines with his second ability. You can pay X mana to remove X counters and either move them to another creature, deal X damage to target creature or player or put an X/X beast token into the battlefield. Being able to kill Marath with his own ability, only to bring him back bigger and do it again is awesome.

Obviously the drawback is that the ever increasing mana cost will at some point mean you just can’t bring him back, so you will be playing a risk vs reward game, “do I bring him back now and hope he isn’t removed, or do i wait a few turns and straight away use his ability?” Obviously the potential here goes a lot deeper than that, but it usually boils down to summoning him now, or waiting a little later on.

When using Marath, you will normally find yourself wanting to either burn your opponents creatures, or building up your own for massive swings of damage, even aiming for lethal damage in a single swing. To this end, Marath can serve as a serious control card (something that this deck largely lacks). “Oh you played a 5/5 creature? I remove X counters from Marath and burn it.”

The deck’s second commander is; Mayael the Anima, and using her can really speed up this deck: 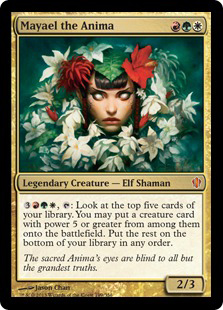 So, Mayael lets you look at the top 5 cards of your library and to place a creature with power 5 or greater onto the battlefield. This particular deck contains 11 creatures with power greater than or equal to 5, so while the odds aren’t astronomically great, you still have a decent chance of letting something big hit the battlefield. All in all however, her ability is pretty unreliable and she doesn’t combo too well with many cards in the deck. One notable exception to this is Where Ancients Tread (However, this combos with almost every card in the deck anyway). 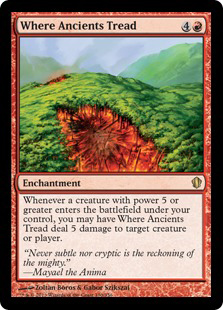 Last but not least, the final included commander is Gahiji, Honored One. Check him out: 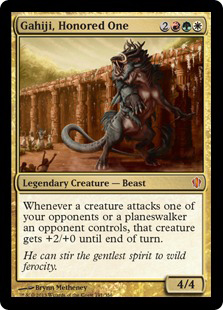 Gahiji is helpful. He puts a target on every other player’s head, as anyone not attacking you gets a +2/+0 bonus to their creatures. This serves as not only a disincentive to attack you, and hopefully to pass off some of the heat you might be gathering, but also makes your already beefy creatures simply massive. He is a rather versatile commander in two-player games, or massive multiplayer matches. During a multiplayer game, you can further keep the heat off you by using the deck’s three Curse cards. Each of these will benefit players who AREN’T attacking you. If you keep the heat off you just long enough, you will be able to simply steamroll the competition. 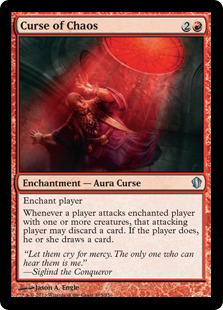 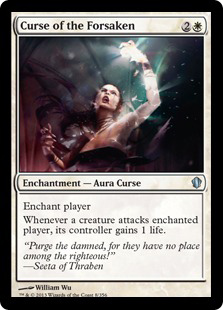 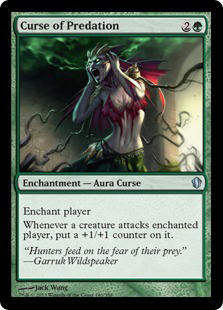 So after playing against the other five pre-constructed Commander 2013 decks, I found Nature of the Beast to be rather he weakest of the bunch. Only4 creatures out of the 22 included in the deck cost less than or equal to 4 mana, and two of those are commanders. This slows down the whole deck considerably. Combine this with the most lands out of any of the decks at 42, it can be hard to come out swinging. However, once the deck does get swinging, it is really hard for anyone to stop it.

The deck’s other massive weakness aside from its speed is the fact that it is useless against flying creatures, with only two of its own to hold opponents back. The Evasive Maneuvers Deck in particular can just walk all over Nature of the Beast, no matter what commander you have chosen.

I also personally found it to be weak in one-on-one matchups. The deck, no matter which commander you use really relies on the multiplayer format for a lot of its cards to work. Gahiji, Mystic Barrier, Witch Hunt and Naya Soulbeast are all basically dependent on there being multiple players in the game (Mystic Barrier just flat doesn’t work otherwise). The deck can pick up speed relatively quickly in a multplayer game though, especially if you have Gahiji out as your commander, as it can take the heat off you for enough time to bring out your heavy hitters and sweep the board. 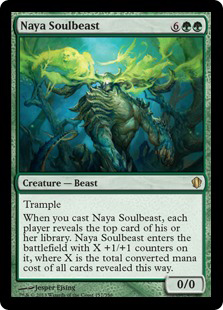 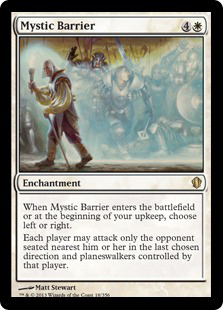 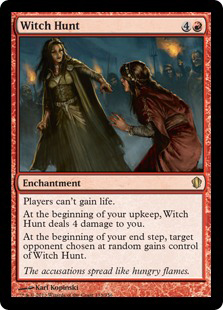 All in all, while Nature of the Beast is a pretty strong deck, with a tonne of variation and abilities to combo your cards for insane amounts of damage, it is easily the weakest of the five, and practically requires you to be playing a multiplayer game for it to have much use at all. However, it serves well as an entry into the world of Commander, and will be appreciated by anyone who loves playing big beasts and hitting for 40+ damage in a single turn.