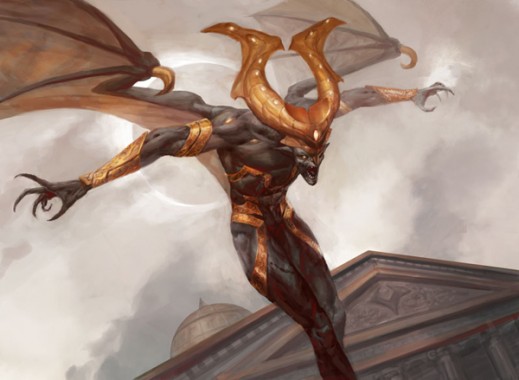 Magic: The Gathering Intro Decks aren’t designed  to win tournaments, or be unbeatable in any of the game’s formats. Their primary purpose is to provide a pre-made deck that new players can pick up and play, secondary to this is that they typically introduce and make use of the new rules implemented in the set they are from. In this way Intro Decks provide a great first stop for anyone jumping into Magic: The Gathering.

NOTE: Since Intro Decks are made for newer Magic: The Gathering players, I wrote the review to reflect that, and used some terminology that only Magic players will understand. This review was constructed using the Death’s Beginning Intro Deck, alongside a Fat Pack of Magic The Gathering: Born of the Gods. Suggestions on how to improve the deck revolve around the Born of the Gods set.

Intro Decks are the first stop for players looking to get into Magic: The Gathering. They introduce new concepts, new mechanics and all in a way that makes the game seem approachable despite its complexities. While many Intro Decks like to delve into the mechanics that were introduced in their particular set, Death’s Beginning ops to go a different way. Instead, it is an intro to one of Magic’s most powerful and complex strategy styles – self-milling.

Discarding your own cards willingly seems to the newer player as a bad decision, after all cards are the lifeblood of the game. Death’s Beginning however shows that this strategy is not only a viable option when it comes to the game, but also very powerful. There are a lot of cards in Death’s Beginning that grow stronger depending on how many cards you have in your graveyard, but before we get to them lets take a look at the focus card in the deck – Eater of Hope 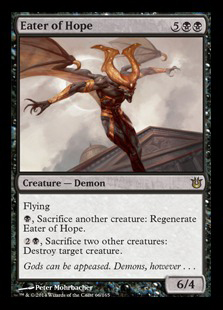 Now I will admit – I don’t like this card. 7 Mana for a 6/5 flier is decent, but his abilities are just not costed well enough. He would have a home at a deck that produces tokens, but other than that he is just a big flier… Well except of course unless you want there to be creatures in your own graveyard. The fact that he can put your own dudes into the graveyard can be a real boon, especially if you combine it with the deck’s other rare card; Nighthowler. 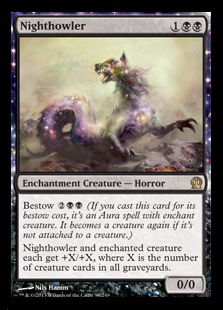 Coming to us from the Theros set, Nighthowler is one of the more interesting Bestow creatures. Either he, or the creature he is bestowed upon will get +X/+X where X is the number of creatures in all graveyards. So here we have a reason to put your own guys there. If you have a guy like Satyr Wayfinder who has already served his usefulness on the battlefield, then getting him into the graveyard could give you that little bit extra power to swing in big, and after all that is what this deck is all about.

So we know that you want stuff in your own graveyard, but lets take a look at some of the cards that will put them there

While there are a few more cards in the deck to fill up your graveyard, these will be your main go-to’s. With 2 of each of these cards in the deck, you wont be running short of ways to empty your library and power up your creatures.

Now, while Nighthowler gets a massive boost from the creatures in graveyards, he isn’t the only one. Here are a few more of the creatures that turn from imposing threats to giant monstrosities if you have enough dead creatures; 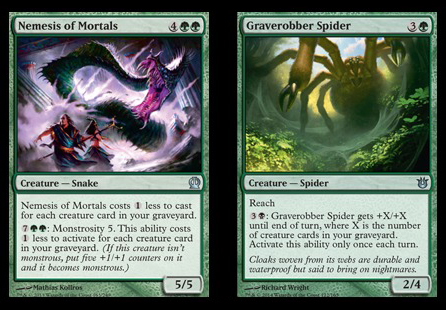 Nemesis of Mortals is one of my favourite cards from the whole Theros Block to date – a 6 mana 5/5 is not the most aggressively costed creature, but the fact that he costs 1 less to play for each creature in your graveyard is insane. You can drop him for a little as 2 mana, and make him monstrous for as little as 2 more if the conditions are right. Not only that, but Graverobber Spider can be pumped up depending on the number of creatures in your graveyard – talk about heavy hitters.

Lastly, the deck also has a fair few answers for just in case something goes terribly wrong and you need your creatures back from the graveyard; March of the Returned, Rescue from the Underworld and Pharika’s Mender.

These cards can, and likely will absolutely turn the tide for you in this type of deck. Return from the Underworld is especially good for bringing your bigger creatures onto the field for a lot cheaper, while Pharika’s Mender and March of the Returned can bring out some of your guys that have accidentally been destroyed by your opponent or sent to the graveyard by mistake.

So while this deck is by no means competitive, it does a great job of introducing new players to one of the more obscure and difficult strategies in the game. I personally love that it does this, as it will teach players that emptying your own library into the graveyard can have its benefits. If you wanted to make the deck a little bit stronger, then I would suggest adding in Champion of Stray Souls, which although expensive allows you to swap out creatures on the field for those in your graveyard. All in all however, for an intro deck, Death’s Beginning really shines.