Magic: The Gathering Intro Decks aren’t designed  to win tournaments, or be unbeatable in any of the game’s formats. Their primary purpose is to provide a pre-made deck that new players can pick up and play, secondary to this is that they typically introduce and make use of the new rules implemented in the set they are from. In this way Intro Decks provide a great first stop for anyone jumping into Magic: The Gathering.

NOTE: Since Intro Decks are made for newer Magic: The Gathering players, I wrote the review to reflect that, and used some terminology that only Magic players will understand.

Blazing Beasts of Myth is a red/green Intro Deck from the Theros set. Magic players all have one thing spring to mind when someone mentions red/green: Aggressive play! Instead of focusing on particular mechanics or monster abilities, this deck hits hard and hits fast. Satyrs are used here in order to speed up the production of mana so that you can slap down your giants, snakes and elementals early in the game, and hit your opponent before they can even blink. Monstrosity is used here to great effect, as big creatures become insurmountable challenges for your opponent, and to top it all off can really screw with the way they play their game. A prime example of this is the face-card for the deck: Ember Swallower 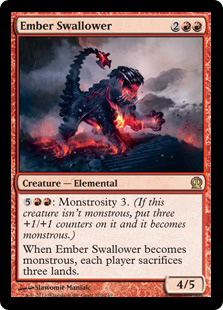 A 4/5 for 4 mana is great no matter which way you slice it, and as you can see above he has a nice little Monstrosity effect. Aside from becoming a 7/8, he also forces each player to sacrifice three lands. While this seems like it is a detriment to you too (as you have to do it), by the time you trigger this bad boy, you should have more than enough mana producing capabilities outside of your lands to keep you sitting pretty, while hopefully setting your opponent back a few turns. As I mentioned above, Satyrs are here to help you do this, check out two of them that will really help you out: 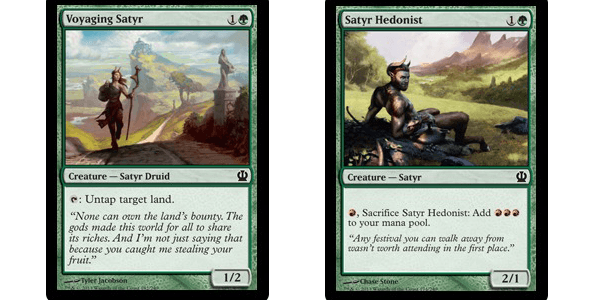 As this is a deck with red in it, that means burn spells. Hitting your opponent or their creatures (usually the latter) for damage is a godsend, and can help you quickly clean up the field, or pick off that nagging threat on the board. With 2 Lightning Strikes and 2 Magma Jets, you will be sitting pretty, especially since the latter lets you Scry for 2 cards (look at the top two cards of your library, and put them on top, or on the bottom of in any order you choose). Scry is a great mechanic, and it becomes really helpful while you are trying to fish for land or for your big creatures to hit the field hard. 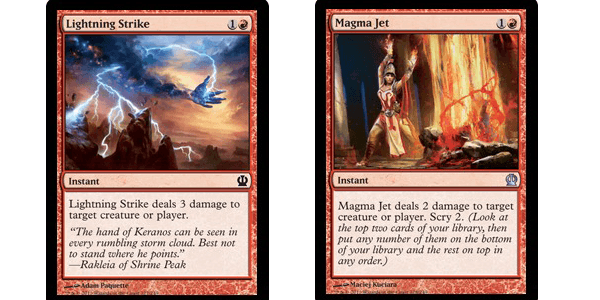 As with all Intro Decks, this one also contains a second rare: Polis Crusher. This red/green giant will allow you to walk your way through your opponents defenses in no time. It has Trample, AND protection from ehcnantments. “What good is protection from enchantments?” You say? Well, aside from being able to be affected by the any Enchantments already on the field, Theros has introduced a new type of creature called Enchantment Creatures.  Polis Crusher is immune to these Enchantment Creatures, and he can’t be blocked by them. Also, when he goes Monstrous, he is able to destroy one enchantment on the field, so he can target one of those Enchantment Creatures if you choose. 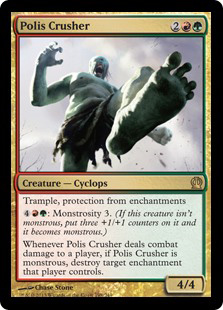 Blazing Beasts of Myth is a really fun deck to play with, and while It wont be winning you tournaments anytime soon, if you are new to magic and are looking for a deck filled with giant beasts and quick mana sources, then you can’t go past this one. One final thought on the Intro Decks in general: I noticed when I was playing with them, that the cards feel quite different, almost slippery in comparison to normal. Due to this, they got dirty quicker and were also harder to shuffle, so if you plan on using them a lot you might want to invest in some sleeves (although you should be doing that anyway!).