Magic: The Gathering is one of the biggest game franchises in the world, and the Duels of the Planeswalkers series has allowed players to experience a sampling of what the games have to offer for the past few years. Each game brings enhancements and updates to the predecessor, and Magic 2015: Duels of the Planeswalkers is no different. With a cleaner and more fluid UI, combined with a coherent and enjoyable story make this a great addition to the franchise. However, with all the good it does, Duels 2015 manages to make some choices that will undoubtedly ostracise and upset long-time fans of the series. 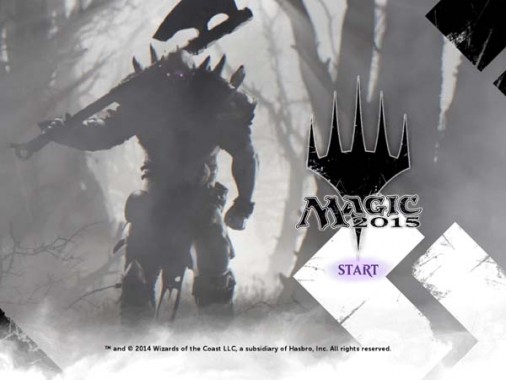 The story of Magic 2015 takes places after Garruk Wildspeaker has been cursed by Liliana Vess during the game’s Innistrad block. Losing his grip with nature, the most fearsome hunter in the multiverse has set his sights on a new form of quary; Planeswalekrs. His thirst for destruction takes him around the multiverse, slaying Planeswalkers (including the player character from magic 2014). You, a nameless Planeswalker have taken up arms to stop Garruk and with the assistance of Jace Beleren will do just that.

It is good to see coherent story in the Duels of the Planeswalkers games, and in the Magic Core Sets in general. Traveling the multiverse isa a great way to revisit some of Magic’s past sets and bring us new forms of characters that we haven’t seen in a long time. It is all tied up nicely too, with the resolution easily hinting at the future of the series. All in all the story is a short but enjoyable romp that any Magic player, be they rookie or veteran will enjoy. 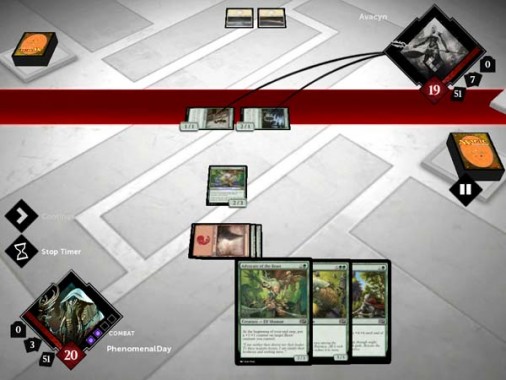 Duels of the Planeswalkers has always been a series that has managed to not only introduce new players to the world and rules of Magic: The Gathering, but also allowed old players of the game to enjoy its bit-sized sample of the game at large. Magic 2015 keeps this alive by giving players access to hours of the world-beloved trading card game. This year’s sampling managed to bring in some new mechanics like free-form deck building, and a coherent story that spans Magic’s multiverse. However, it should be noted that these enhancements are not without a few caveats.

Firstly lets talk about the UI which has been given a massive overhaul from previous years. Now we get battlegrounds that feature the same stark black and white stylised art style as the M15 Core Set. Aside from being a marked visual improvement on last year’s iteration, Magic 2015’s UI is a lot slicker and responsive than ever before. Gone are the clunky controls and huge wait times between actions, and the gameplay feels a lot smoother and more enjoyable this time around.

The most important new addition to the game is the free-form deck building. Unlike previous Duels games, players now have the freedom to completely dismantle their deck and build one from scratch from their acquired collection. With over 300 cards available for use in-game, there are a LOT of things you can do. However, the game is not as free-form as you might think. You are limited to the number of cards of each rarity that you can put into your deck. You can have 4 of a single common in the deck (similar to the paper game), then 3 of each uncommon, 2 of each rare and one of each mythic. So while you can still do a LOT with these decks, you wont be able to make them into the extreme powerhouses that you might think.

The cards themselves are pretty varied, including adding Guildgates (the first time a player has been able to use dual-lands in the series) but they are nothing compared to what you will be facing. The opponents have access to cards and abilities that not only do you not have access to, but that players in the REAL world scarely see. During a match with Kiora she played a Tropical Island, which hasn’t seen print since Revised in 1994 and is one of the more sought-after land cards in the game. When playing, I found myself really wishing that I had access to some of the amazing cards (and even some of the less than stellar ones). I so badly wanted to build my Maze’s End deck! 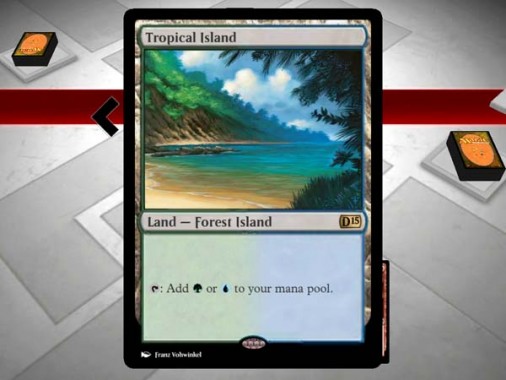 The game itself is broken into chapters, and each of these chapters take place on one of Magic’s various planes (universes). You start off in Innistrad, a plane based around horror mythos, and after you have proven your worth to Avacyn, the guardian angel you are able to unlock additional chapters on your way to find and cure Garruk. The planes themselves all have 4-5 decks that you have to face in order to progress and these are really quite difficult. The only way to make them easier is by making your own deck stronger and to do this you must “Explore the plane.”

Exploring basically triggers a random encounter against a challenge deck, and once you have defeated that deck you will be able to earn a booster pack and add some cards to your collection. Boosters start off at only a couple of cards, but as you progress you will earn more and more. Cards are also specific to the plane that you are on, so if you really want that sweet Brimaz, King of Oreskos for your white deck, then you will need to explore a LOT of Theros.

Multiplayer is back but sad to say does not feature the 2-Headed Giant format that players have come to love. Instead you can now have up to four players engaged in a free for all duel. Players can use any of the cards they have gained access to and any of the decks they choose. Hopefully 2-Headed Giant will be added in a later update, but I wouldn’t hold our breath.

It should also be noted that although the client is free to download, the game is not free to play. You will only get access to the Innistrad plane with your free download, and everything after that costs extra. To unlock the remaining planes, you will need to shell out $12.99 (or if you buy them individually they are $3.79 each). This isn’t too bad as it puts the price on par with Magic 2014. Unfortunately, even if you buy all of the planes, (or the $25 complete bundle that is supposed to unlock every chapter and collectible card in the game) there are still 14 booster packs worth of cards that cannot be gotten during regular gameplay and have to be purchased as “Premium Booster Packs. Each premium pack will set you back $2.49, which means that to unlock every chapter and every card you will be set back $47.85 (or you can skip the middle man and buy the whole shebang for the discounted price of $43.99).

I don’t have an inherent problem with micro-transactions, but I feel that they are a very quick way to ostracise your fan-base. This is especially true in a game like this where you need to purchase the game before you can even play. 13% of the game’s playable cards are hidden behind a pay-wall, and while you obviously don’t need them to play or to win, not being able to attain them in any way without paying is more than a little rough. 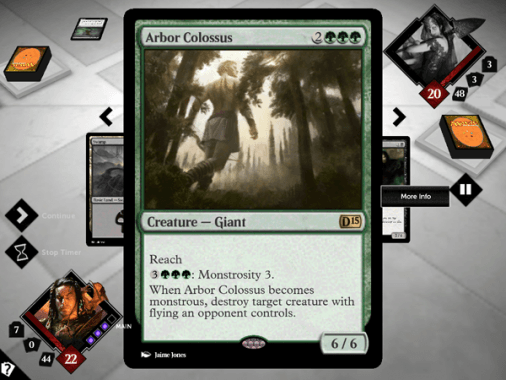 The visuals of Magic 2015 are simply beautiful. The physical card game and the DotP game both use a highly stylised, minimalist black/white colour scheme with splashes of colour. This works surprisingly well for a video game, and creates a battlefield that remains unobtrusive during the battle but is still by no means ugly. When you attack with your creatures, a red bar appears across the screen so you can quickly and easily see who is attacking and who is blocking, then the battlefield collapses at the end of combat and goes back to its off-white texture.

The cards themselves all look great, and have the newly introduced border around them to help new players to the game see what they will look like when they crack open real-world booster packs from M15 onwards. Lastly, the game’s few cut-scenes are all done in greyscale with little highlights of colour that really make it pop. Things like Garruk’s eyes or Jace’s magic really stand out from the rest of the world and are quite enjoyable to watch. 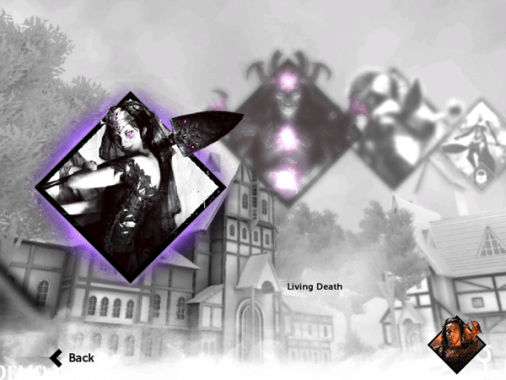 The audio is very low-key here, with only a small amount of music and even less sound effects. The sounds all represent different facets of the game like combat, drawing a card or casting a spell and are quick and quiet so as to let you stay in the zone of the game.

The game’s cinematic sequences are largely unvoiced, with the exception of Jace Beleren (who out there didn’t see THAT coming) who instructs the player on where they have to go next. Despite the lack of voice acting, the scenes themselves are all filled with music and sounds ominous enough to legitimately fear what Garruk will do to the multiverse if he isn’t cured. 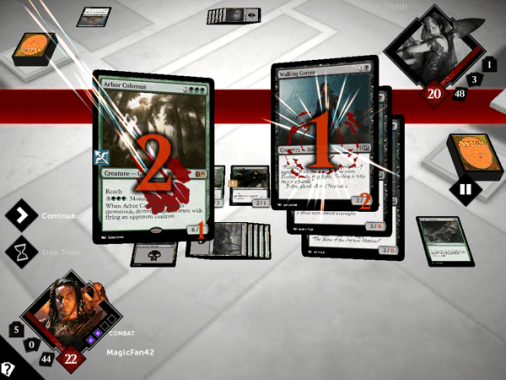 Magic 2014: Duels of the Planeswalkers was the game that got me back into Magic: The Gathering after an extended hiatus, and while it had it had its problems, it was still a pretty good showcase of the world’s largest trading card game. 12 months later and we have a game that manages to do-away with many of the problems its predecessor had, while still throwing up a few of its own.