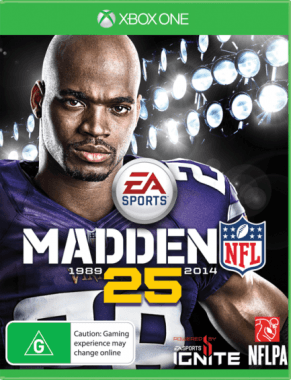 Overview
With the next generation of gaming consoles upon us, a number of sports titles have made the jump from the 360 and PS3 to the Xbox One and PS4. One of these happens to be EA Sports’ biggest franchise in North America, Madden. Being the 25th anniversary of the Madden series and the first one to grace the Xbox One, we have two things to look at and while a fair number of things have remained the same when compared to Madden NFL 25 on the 360 which boasted some minor improvements but few actual additions to the game, the Xbox One edition features a number of upgrades, but is it worth jumping to the next-gen?

Gameplay
While there have been a few instances in the past where a next-gen version of a game may suffer from a few modes being taken out or trimmed as the company prioritized graphical improvements over bringing additional content, thankfully Madden NFL 25 has made the jump in-tact with all of its modes intact and with a few refinements here and there to help tighten up the feel of the game. 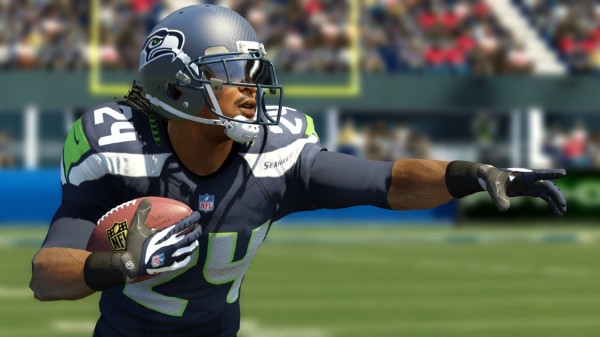 While there have certainly been additions to Madden NFL 25, most of what the game still plays the same as last year’s iteration and this remains true in the Xbox One version of the title. Of course there has been fine-tuning to a number of mechanics, though many of these are not clearly apparent outside of new plays in the playbook and mostly fix back-end issues from last year’s iteration.

As for what has been added into this version of the game, the Connected Franchise mode has been revamped with the option to play as not only a player or a coach, but also as an Owner of a team. Players can still choose to create a player of their own of course, play as a current player or select from a larger list of football legends than ever before and play as your role only or as the Coach to the team and having complete control over every aspect of the game, drafting and signing players etc. However despite being the Owner of a franchise, there really isn’t a whole lot added in this mode.

Being the Owner is simply being the Coach of a team but with a few extra fringe gameplay options such as the ability to set prices for tickets and merchandise and of course, being able to move the team to an entirely new city or state, revamping your stadium or demolishing and starting from scratch and trying to balance the books so that the team stays profitable and earns cash while also being successful on the field. While a nice addition, it feels like a rather basic inclusion that likely could have been fleshed out more. 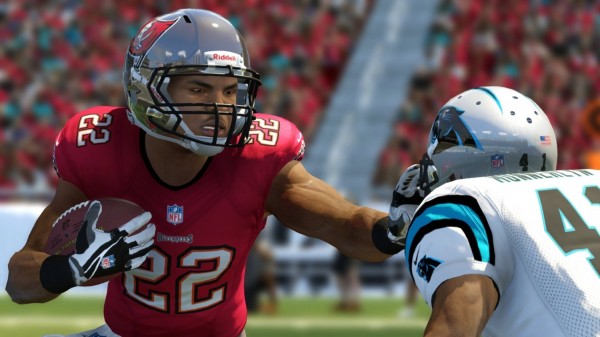 Another minor inclusion in the game is a bit of an addition to the MUT (Madden Ultimate Team) card system where players have an option to work on team chemistry to help their team’s performance, adding more depth to a gameplay option that already is likely the deepest and most time consuming outside of the Connected Franchise mode.

Once the player actually gets on the field, they will find that a few more additions and a refined physics engine which will be discussed later, have made it into the game, but again nothing very groundbreaking. Gameplay remains very much the same as what was offered in Madden NFL 13 but the main revamp this time around is refined running mechanics in what is now called ‘Run Free’ and a precision modifier. It is worth noting that it may be tricky to get used to some of these new running techniques at first, but thankfully a newly revamped ‘Skills Trainer’ provides a tutorial for these various new additions to the game.

The whole run free aspect has adjusted and enhanced the various running moves that players have always had access to, such as the juke, stiff-arm, spin and more. These various techniques have been made easier to use and the aforementioned precision modifier helps make these moves more useful, as holding the precision modifier trigger will help turn some small runs into a first down or a break-away run for major yardage. 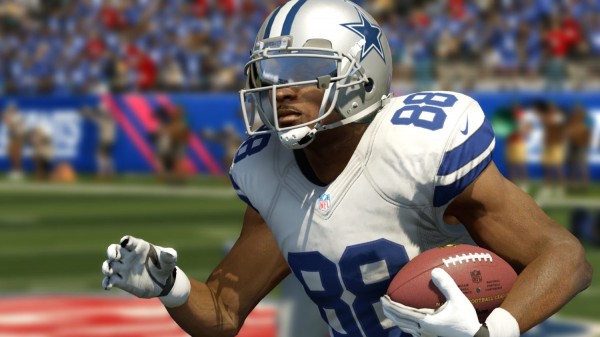 With the Xbox One version of the game, the offensive line seems to respond better to the movement of the player as they will often manage to open up a hole in the defense where it needs to be or actively move to defend a runner that is in the open which helps immensely as the defense has also seen an improvement in AI which makes them much more difficult to overcome compared to their 360 counterparts.

Away from the offensive side of things, the defense has been given a bit of an upgrade as well thanks to the ability to perform quicker switching between players to take down a ball carrier or set up before the play and a ‘wrap tackle’ that makes it easier to take down the ball carrier with low-impact but usually effective hits. Though considering the fine touches to the physics engine this time around, players may opt for more brutal hits thanks to the hit stick as they level an runner or take down the other team’s quarterback for a morale draining sack.

As mentioned earlier, the defensive AI has been enhanced this time around and while it is still possible to blow past a cornerback or even a free safety with proper running technique, the AI has made it a bit more difficult this time around as they will try to play safer on the run game. As far as passing goes, the defensive AI  has also seen a decent upgrade, allowing the defense to better respond to your passing plays and even predict some of your play calls, forcing players to change things up occasionally. 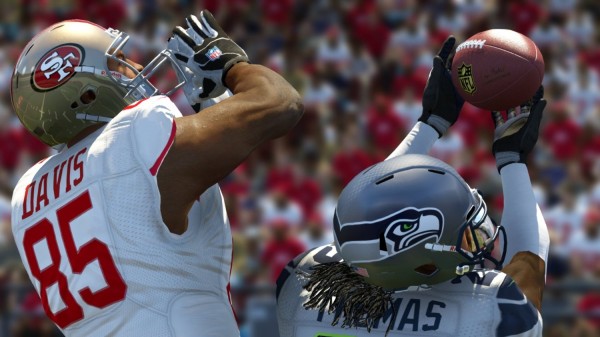 It is also worth noting that, while this is a mode that few may want to use, it is possible to use the SmartGlass App through any capable device to activate ‘ChoachGlass’ which is a useful little tool which tracks the tendencies of the opposing team and recommends certain strategies based on the opposing team, giving the player helpful plays for when they are in trouble. Interestingly enough, the Xbox One’s Kinect also seems to be a lot more responsive than the 360 version, allowing for easier audible calling. However one has to be careful about post-play calling as the Kinect really seems to like picking up the word ‘Challenge’ a lot even when there is obviously nothing to challenge on the play, resulting in a loss of a time-out.

Visuals
The biggest change that any player will find in Madden NFL 25 on the Xbox One is the graphical upgrade between the old version of the game and the next-gen version. Thanks to the fact that the original Madden NFL 25 fixed the numerous issues with the physics engine which featured players awkwardly flopping over one another, often causing a dogpile of people falling over after a play ended, the Xbox One version is mostly free of these issues with most players reacting realistically to being hit, though there are still issues where a player will bend in into an impossible bone-breaking position after a hit and get up like nothing happened. 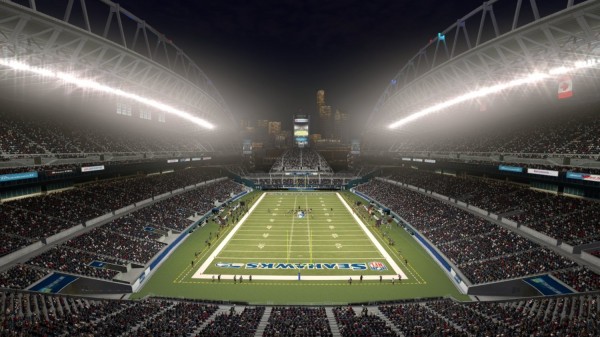 There are a number of tiny nuances that have been refined for this next-gen experience as well, and most of it involves the look of the players, stadiums, turf, and weather patterns. Each player still looks a bit odd, but they have a more detailed appearance than before while the stadiums feature a better looking crowd and the canned side-line animations have also been varied up this time around. The grass stains sticks to the uniforms of players better and snow/rain looks much better in this version of the game, allowing for a more realistic looking field.

Audio
Outside of the various grunts of players, collisions of bodies, crowd reactions, and the calling of various change-ups before hiking the ball, nearly everything that the player will hear as they play the game comes from the commentary of Jim Nantz and Phil Simms. While the voice work does sound a bit better in the Xbox One version  of the game, for the most part the commentary tends to be completely off the mark. After only playing a few games it is clear that the commentary is triggered simply by basic actions on the field which means that they can do everything from call a player the wrong name or completely miscall the situation, such as admonishing a defense saying they can’t stop the run game when the opposing team only has around ten rushing yards in the fourth quarter or calling it a close game when it is a blowout. 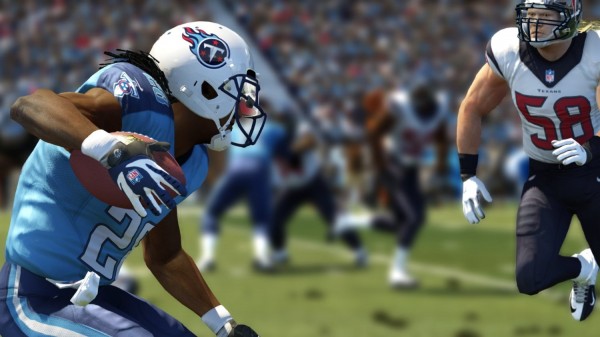 In most stadiums there are always your classic songs that are played to rev up the fans in the arena or simply are so familiar with the game that they are impossible not to include. The music found in the Xbox One version of the game either has been revamped or simply works better with the game as it is audible on the field occasionally in-between plays and the crowd can actually get behind the game with loud cheers or boos and even chants.

Overall
While there have been a few tweaks under the hood and a few new methods of control have been added to the Xbox One version of Madden NFL 25, most of the improvements come from a new sheen of paint that helps make the game look better on this next-gen console. Other than that, Madden NFL 25’s Xbox One version feels and plays almost identically to the 360 version, which felt disappointing but at least this time around it is a fancier looking disappointment in a yearly franchise that doesn’t break anything but adds very little of note. That being said, Madden NFL 25 still delivers an excellent football title with tight controls and more than enough to do to keep NFL fans busy between games.