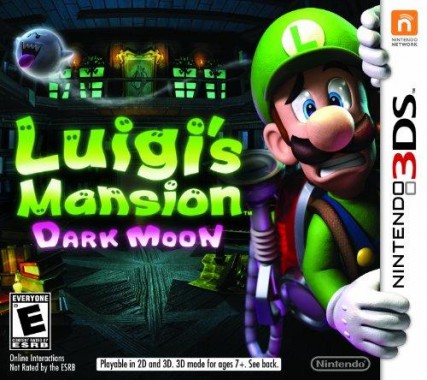 Overview
Luigi has been around for nearly as long as Mario, playing second fiddle to his famed brother. Over ten years ago, Luigi got his time to shine in Luigi’s Mansion (I don’t count Mario is Missing, if you’re wondering). The game is to this day considered to be one of the strongest titles that hit the platform, and has garnered a hungry following that have begged for more for years. That day to feast has come, Luigi fans. Luigi’s Mansion: Dark Moon is everything we could have asked for in a sequel, with five mansions to explore, a brand new multiplayer mode, and all of the charms of the original. The question is, can this shunned brother prove himself on a new platform, or does this follow-up prove to be too late to the party?

Story
Professor E. Gadd is at it again. It’s another peaceful day in Evershade Valley, and Gadd is thrilled to have the mysterious Dark Moon obtained – which brings peace to all of the ghosts and makes them friendly. After King Boo comes in and shatters the into six pieces, this odd little Professor summons the help of his old friend with the green hat to make things right. 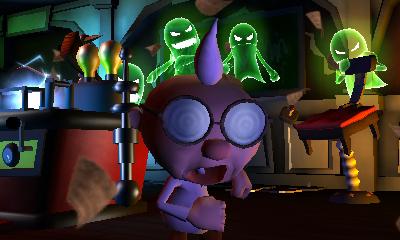 Compared to the first story, this narrative in my opinion is more charming, as there has definitely been a lot of development of Luigi’s character since the original, and it shows in a greater manner through this sequel. Luigi is clumsy, frightened, and shows a ton of uncertainty as you track down ghosts, and that and the colorful cast of foes come together to make one experience that is made to make you laugh and smile as we see the ultimate anti-hero progress. E. Gadd has much more dialogue this time around as well, and while the tutorials can be a bit much at the beginning, I must say it’s good to see a character that could have been an afterthought or even dropped make such a blossoming return.

Gameplay
Ever since it was announced at E3 in 2011, I have been excited for Luigi’s Mansion: Dark Moon. I mean, the promotion made the gameplay look like one smooth experience that would rival what we had on the GameCube. That was also a big worry I had as well. Making the transition to a portable platform is a big jump, and due to the 3D rooms of the first title, it was hard not to doubt how solid the controls would be. Thankfully, Dark Moon delivers when it comes to control as the every mechanic is built for the 3DS, taking advantage of the unit entirely to give us what feels like a full console experience in the palm of your hand. 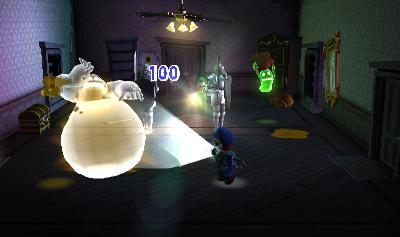 Before we touch on the topic on controls fully, you would have to understand the concept. For those unfamiliar, the main objective of the game is to go on missions throughout various mansions, gather loot, and suck up ghosts with the Poltergust 5000 (Luigi’s handy vacuum). It isn’t all about snagging ghosts however, as rats and bats cause damage upon touch, and there are plenty of traps to avoid as you cautiously proceed into the next room. In minor ways, this game is a survival horror romp – as the aspect of living through the mission is just as important as ghoul collecting. To capture a ghost, the player first has to stun one with the stroboscope (which is a fancy name for flashlight). This same formula was a big part of the original, but now the player must charge their light by holding the B button, and then blind the enemy to begin the whole sucking up sequence. Boos and other supernatural foes put up quite a fight, so the player must hold down the switch of their vacuum and hand on by controlling Luigi with the Circle Pad. Not a ton has changed, but everything works beautifully and these controls are cleverly mapped – ensuring comfort even in the most tense situations. 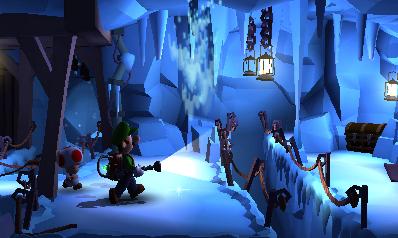 While I would best classify Luigi’s Mansion: Dark Moon as an “action-adventure”, the entire game plays like a giant puzzle when it comes to exploration. For instance, early on in the game, E. Gadd gives you a dirty task of cleaning up all of the cobwebs in the first mansion. To do this, you are assisted with a Nintendo DS to communicate with – which gives hints on where your next objective is located at. Every room with webbing has a “!” on the map on the bottom screen, so Luigi must figure out how to get into each room by collecting keys and trapping ghosts, and then search every crevice of the place in order to do discover the web. That example was used to prevent much talk of spoilers, but even while just cleaning up the place, Dark Moon’s mansions are so cleverly designed that it’s hard not to want to turn that next knob and progress forward. Tracking ghosts also uses the same mechanic, but since ghosts can move on the fly- things can quickly get difficult as you try to figure out where they may be hiding. This will leave the player poking and prodding at every piece of their environment, and that scale of interactivity is what makes Dark Moon feel so grand. 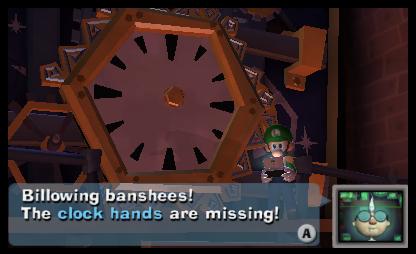 At the end of each mansion lies one big boss that holds a piece of the Dark Moon. Boss battles, like a good portion of the main game present an imaginative formula that gives each large foe a sense of individuality and power compared to the little Boos, and ensures the player is on their toes as they trigger switches and fire projectiles out of their Poltergust. The game doesn’t rush to these points either, as the pacing is rather slow, and allows the player the take the time to move at their own speed preference. Not only does this make boss battles feel greater when they do appear, but it also lets the player enjoy the rich worlds in front of them. I know most of you already know that Luigi’s Mansion is incredibly different from any of the Mario platformers, but this element of relaxed pacing sets it apart even further – placing Luigi’s Mansion: Dark Moon in a league of its own. 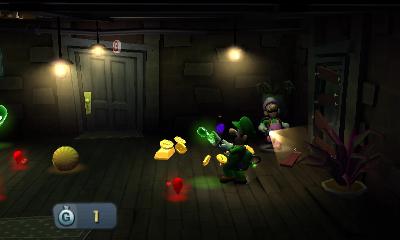 You beat the five mansions, obtain the great number of collectibles, upgrades, and entries into the bestiary compendium. What is a ghost hunter to do? Well, Nintendo thought of that and have developed both Online and Local multiplayer by the name of “ScareScraper”. The way this works is that up to four players can go in and participate in one of four objectives – online, locally, or solo, and up to an infinite amount of randomly generated floors to hunt on. I can not put into words how much replay value alone this multiplayer has, as each experience is completely different from the next, and new tools are offered to assist in the interactivity between players. You can use the touchscreen to ping locations of objectives, informing the other colored Luigis that they need to head in that direction. It doesn’t replace a headset, but this idea is the kind of thinking Nintendo have been needing to utilize when it comes to their rather limited online resume as it just feels fresh and unique, and no other game could replicate the fun you and your buds will have as you hunt, play hide and seek with a ghostly mutt, and rack up rewards in the process.

Visuals and Audio
You may be looking at the screenshots within this review and thinking to yourself the game looks good, but not as crisp or smooth as the GameCube version. Well, that is because screenshots are not properly replicated on a screen to show what the true experience actually appears as. Luigi looks fantastic and the detail in his model and equipped gear shine on the 3DS. Environments are even more detailed, adding a ton of old, creaky atmosphere to give the player a sense of unease and wonder as Luigi shivers through each mansion. Ghosts themselves make the most of the subtle 3D, popping as the burst out hiding with their bright colors and charming animations. 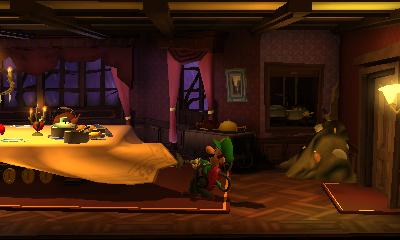 Soundtrack wise, Nintendo didn’t really do a lot to change up the music. For an IP as young as Luigi’s Mansion, they really didn’t need to. The main theme of the original game has been remixed a bit to add some nostalgia and keep the mood, while some new yet still familiar sounding beats can be heard as you tip-toe around each room. Ghosts of course sound over-the-top and cartoony, and that is a good thing as Dark Moon isn’t meant to take itself seriously – it just wants to put on a good show. Luigi has no more voice work this time around, but the same elements of charm still apply. Players can still press a button to have Luigi call out to the unknown in his shivery voice and Luigi still enjoys humming to the in-game melodies, which in my opinion is one of the trademark traits of this series.

Overall
This year is deemed the Year of Luigi for good reason. Mario has had his time and we love the red guy to death, but there is nothing like Luigi’s own little experience. This entry into what we hope is a continuing franchise adds a ton of new elements, an enjoyable plot and main game, and throws in a giant punch with it’s revolutionary multiplayer. It’s so good to see that Nintendo still handle their first party fare with such love, and if you are looking for a smile topped off with one of the best experiences you can have on a portable, strap on your Poltergust 5000 and come see why this Dark Moon shines so brightly.