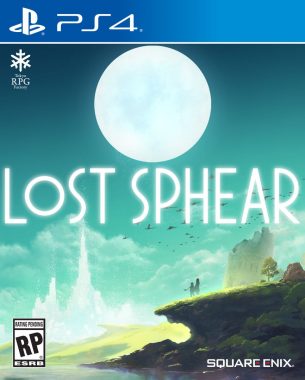 Lost Sphear is a modernized take on the classic JRPGs from Square Enix’s Tokyo RPG Factory. Building on I Am Setsuna, Lost Sphear uses the ATB 2.0 combat system that adds character positioning to the game’s strategy. New to the game are the powerful Vulcosuits which unlock powerful new abilities to assist characters in battle.

Lost Sphear follows the story of Kanata, a young swordsman living as an orphan in the town of Elgarthe. A mysterious plague that causes people and things to become lost in a white mist is worsening, along with the number of monsters wandering the world. Kanata soon discovers that he can use memories to restore what is lost. In usual JRPG fashion, Kanata sets off with his childhood friends to restore the world. 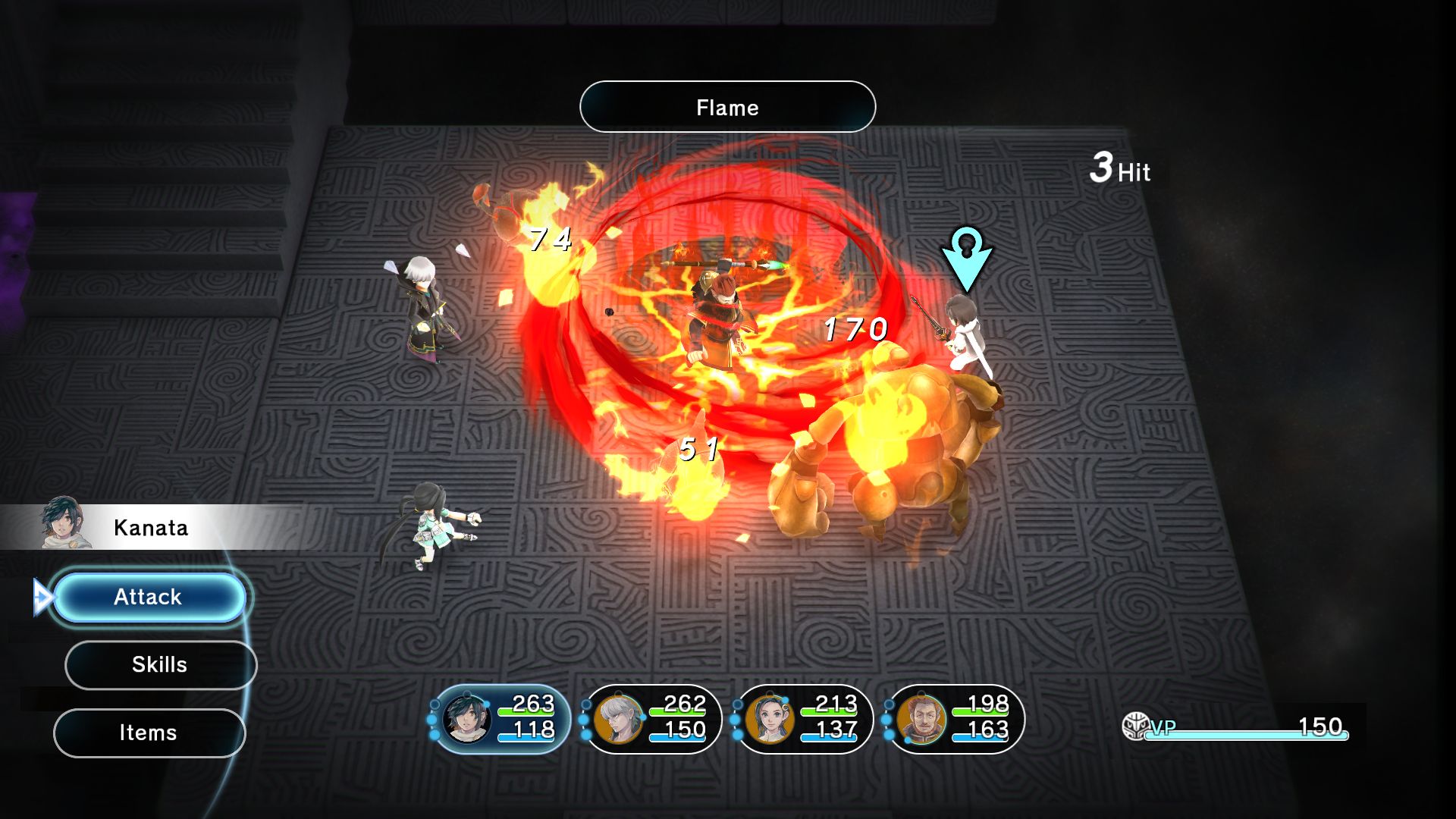 The weakest link in Lost Sphear is by far the story. The game uses almost every major JRPG trope out there. The writing is simple to the point of boring. Every twist and turn is easily predictable. Characters are generally dull and one dimensional. The biggest tragedy of all is how shallow the memory system is. There is so much potential for rich stories as players gather memories of what has been lost, but instead, players get a couple of sentences that home in on a key word or theme. An enjoyable story is absolutely necessary for JRPGs, given the normally long length of the game. Unfortunately, Lost Sphear falls short on this front.

Lost Sphear is a modernized take of the many titles Square Enix pumped out during the 8 and 16-bit golden era of JRPGs. The item mechanics are similar to Final Fantasy games. Equipment is a little less linear than the old school JRPGs, as players have the option of upgrading existing gear up to ten times each instead of purchasing new equipment all the time. The main difference is the memory system. These crystals can be found like any other piece of loot or absorbed during certain dialogues in game. Memory is used to unlock zones and items that have become lost, traded for magical abilities called spiritnite, and crafted into giant artifacts that provide global effects or buffs in battle.

The ATB 2.0 combat system is the next evolution of the classic Active Time Battle system. Every unit on the battlefield has an action bar that fills over time. Once the bar is filled, the unit can act. Depending on settings, the bars can either continue to fill in real time or the action will pause during targeting. The new 2.0 changes add an area of effect to all attacks and abilities plus the freedom to move around. As time passes or players attack and take damage, the Momentum meter fills. Once filled, a Momentum point is stored. When a character attacks, the screen flashes blue momentarily. If Momentum is triggered, players will either attack for a second time or the skill will also inflict its Momentum effect. In case of difficult fights, characters can also don their Vulcosuits. Players can either partake in combo attacks or cast a more powerful version of their spiritnite skills at the cost of Vulcosuit Points (VP). 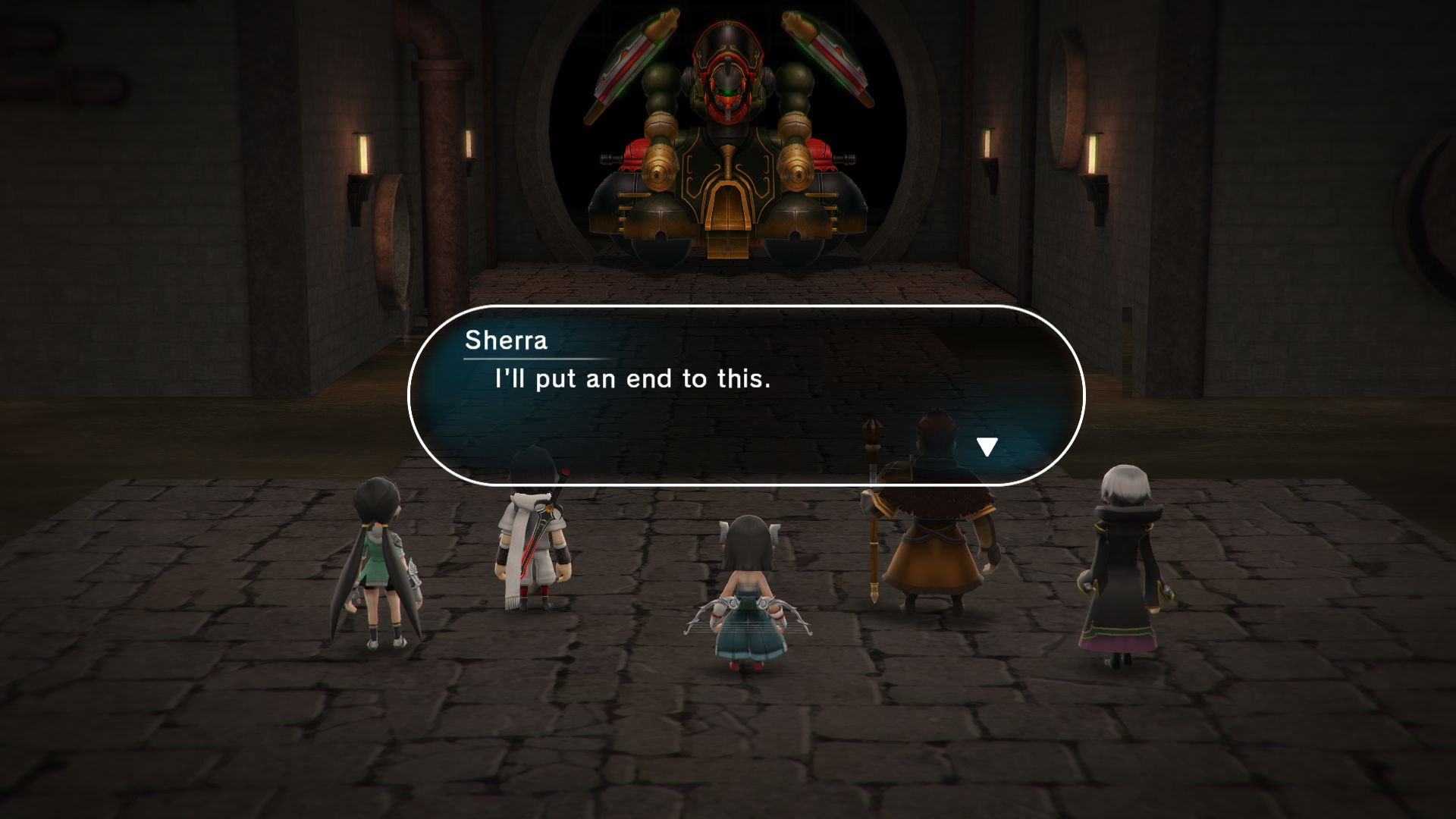 For the most part, Lost Sphear’s ATB 2.0 combat is an enjoyable mix of the familiar with some new ideas. The strategic element that character positioning adds in enjoyable, especially for boss fights where dodging high damage abilities is necessary for victory. I also like the fact using MP consuming skills grants bonus experience and that players can level within combat, immediately topping up HP and MP. It encourages players to use skills often, since level ups occur often. However, the Vulcosuit system falls flat. The game’s difficulty curve seems to be intended for players to save their VP until the boss battle, blow all the costly abilities on the boss, and then try to finish off the boss on foot. The highly limited usage dulls what should be an awe-inspiring experience of being an utter beast in a powerful mech suit.

The game provides quite a bit of customization options for players. The spiritnite system gives players a pool of abilities for each character and each ability can trigger an extra effect using the Momentum system in combat; however, players are limited to a set number of skill slots. In addition, players have a limited number of artifacts spots they can build to grant them global or regional effects. Effects range from utility buffs like faster run speed in the overworld map to in combat benefits. I really like the artifact system as it gives players a chance to highly specialize in a certain playstyle, while forcing them to make some tough decisions along the way. 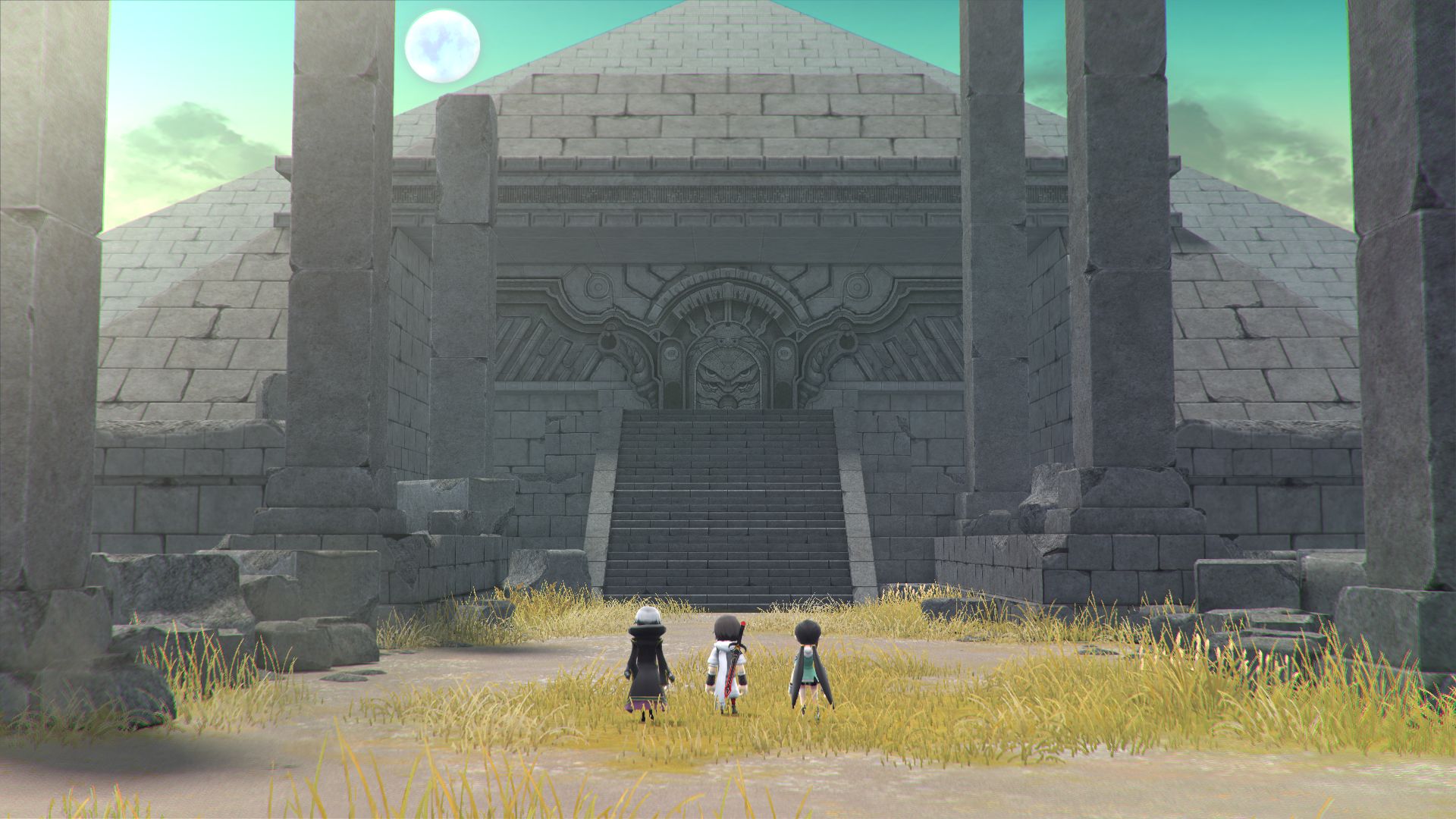 The level design is decent. The maps tend to be rather linear in nature, with only a few side paths for bonus loot. I like the simple stealth mechanics in the game, as they add a little extra spice to the game’s pace.

The PC controls for Lost Sphear as passable, but not great. The controller bindings are simply mirrored on the keyboard, and the keys that can be bound are limited. Since there is no mouse support in the game, players do not have the same level of fine control for targeting attacks compared to the controller. The controller support is excellent on the other hand, so it is highly recommended to plug in a controller instead of dealing with the keyboard only controls on PC. Just note that the only way to quit the game is to use the keyboard’s escape key as there is no controller option for quitting.

Lost Sphear’s visual design philosophy is very much in line with I Am Setsuna. Lost Sphear is a 2.5D game that uses 3D graphics with the a traditional 2D camera angle. The artists are by no means creating their own unique style, but they do a fantastic job updating the old 16-bit look. The animations evoke the old sprite animation style by keeping things simple and the number of animations on the low side. The textures and models of high quality, though I find the character design to be a bit on the generic side. I really like the colour choices for the game, as the softer colours give the game an ethereal, fleeting look that compliments the game’s theme of memory quite well. 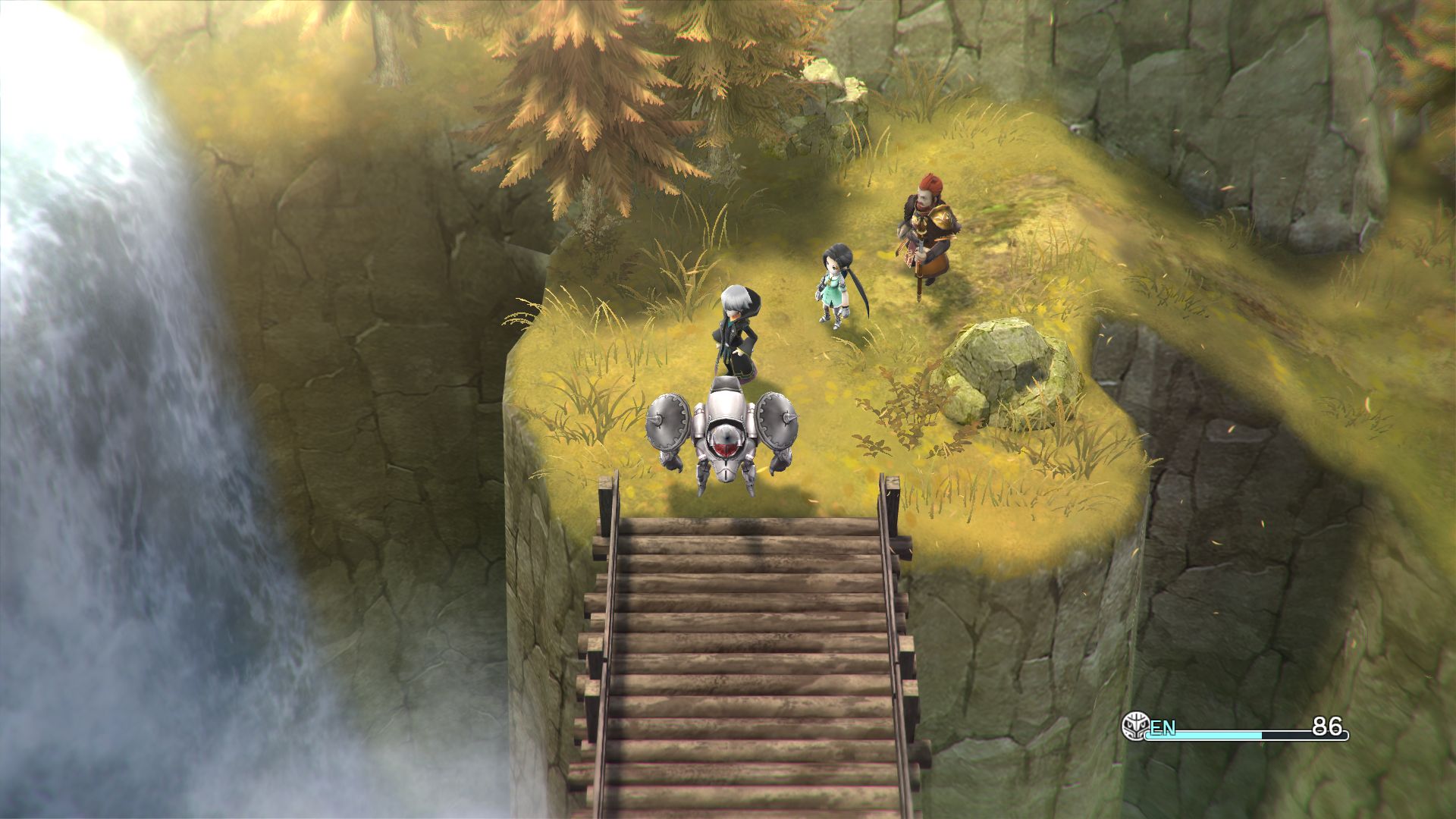 For PC owners, the port runs well enough, though it’s very bare bones. There are few settings to modify the game’s graphics. Lost Sphear does run at a capped 60 FPS, which is more than plenty for a JRPG.

Lost Sphear’s audio experience does a great job of replicating the classic JRPG experience but does little to set itself apart from the crowd. The sound effects are solid. The game has Japanese voice acting, but no English dub. I much prefer this set up than unnecessarily tack on an awful English dub for the sake of having one. The soundtrack is enjoyable, but it’s hard not to feel like I have heard this all before.

Lost Sphear is a love letter to the golden days of JRPGs. The excellent combat system with ATB 2.0 and Momentum does a great job dragging the dated system into modern times, although the Vulcosuits fall flat. The real problem with Lost Sphear is the game spends so much time paying tribute and emulating classic JRPGs that it never gets a chance to forge new ground to establish itself. The combat system just isn’t enough to cover up a dull, predictable story, audio that sounds like every other JRPG title, and luke-warm level design.

Lost Sphear is a loving memory of classic JRPGs, but lacks soul.
6.5