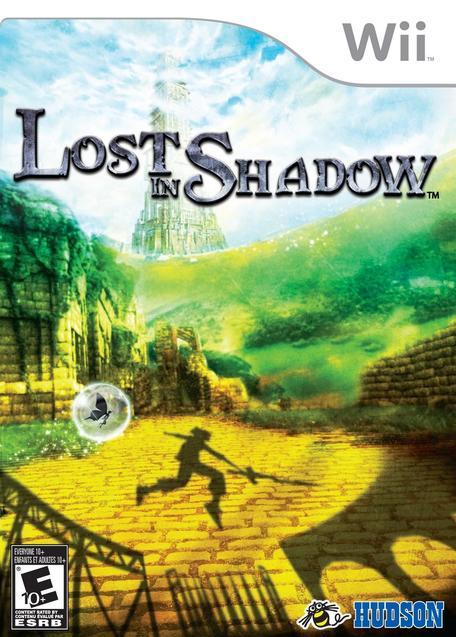 Lost in Shadow is one of 2011’s first big releases in North America and was developed by Hudson Soft as a fresh take on a platformer. The thing that makes Lost in Shadow interesting though is that while platforming in the game, many puzzle elements come into play. Both genres blend with each other with a visually and emotionally captivating setting to pack quite a punch on the Wii and open up the system’s new year with a bang. Here is my review for Lost in Shadow.

Story
When I first heard about Lost in Shadow last year, I was drawn to the visuals instantly, as this title seemed to pack quite an emotional story. After a full playthrough of the game though, the story was not all that deep plot wise but instead rather simple. You start out watching a cut-scene of a young boy who has his shadow severed from his physical body and quickly the shadow is thrown off a huge tower. Now you must make your way back up the tower and find answers.

I can’t really go into much more on the story as it could very well spoil the game, but what you do learn is very interesting about who exactly the lead character, known as simply “the boy” really is. You are accompanied on your journey by a creature known as “The Spangle” which is basically a sylph or fairy like creature that flutters beside you at all times (we will touch more up on this in a moment). 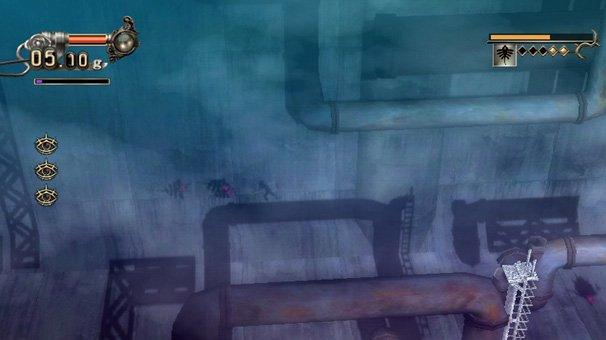 Without a huge overall plot and no voice acting as well as very few cut scenes, you would think it would be hard for Lost in Shadow to convey anything at all but that is truly what made this title stand out for me, as the game’s world mixed with the little bit of plot thrown in really paint a picture as you move through and can hit an emotional chord quite often. I could probably best compare this to Majesco’s remake of A Boy and His Blob or Ico, as the story may not be too complex but the gameplay, visuals and whole world in general give off a vibe where it is easy to use your imagination and actually engross yourself in the game itself, trying to uncover every last detail just to peel off layers to a mysterious world. It truly is that sense of mystery that kept me going in Lost in Shadow which makes it a superb example that you don’t have to turn a video game into a cinema to create a character that players can actually connect with.

Gameplay
The overall game of Lost in Shadow is mainly a 2D side-scrolling platformer but as I mentioned there quite a few puzzle elements mixed in as well. The game is made up of floors which you must slowly make your way up to get to the top of the tower. Each floor has three Monitor Eyes which you must collect to be able to break the shadow barrier blocking the path to the next level. The boy you play as has an HP gauge which is made up out of weight, which can be increased by collecting “memories” scattered throughout the floors of the tower. Equipped with a sword, you can also take out some of the mysterious creatures which block many paths as well. This formula is pretty much the main theme of the game throughout, collect the eyes, gather memories, move on to the next floor. Well, that is before we add in the puzzle elements of course. 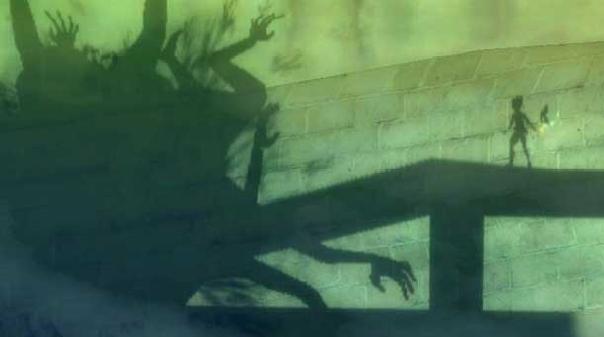 Remember “Spangle” character I mentioned earlier? The Spangle is pretty much follows behind you as you jump and platform with the WiiMote and nunchuck control, but you can also point the WiiMote at certain objects and it will quickly become a cursor, letting you flip or move certain structures in the foreground to create a new path in the shadows. The whole game of course is made up of moving around and climbing in the shadows of the foreground objects, but this method is actually a genius addition that adds a lot of strategy and thinking into the game. While you are jumping from one platform to the next, sometimes you hit roadblocks where you must Spangle to change up the stage to progress. Sometimes this method is as simple as moving one pillar, and other times it can involve quite a bit of backtracking to activate a full path in various ways such as pulling levers or smashing items which can activate doors and openings for you to fully progress. As interesting and well structured as this concept is, it can get tedious after time as backtracking through areas will have you meet enemies which you may have already battled, pillars and platforms you must move again and so on. 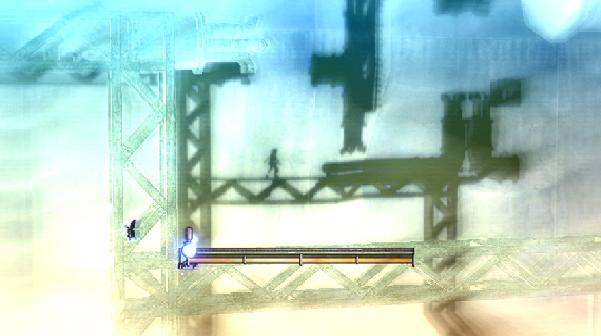 On each floor you will also find doorways known as “Shadow Corridors” which you enter usually about halfway through each level. These are kind of like a dream-like version of the standard stages and a bit more atmospheric, but with a different method of gameplay. The goal behind the corridors is to make it to the end by using the standard Spangle control but with the added element of points which let you flip the whole world horizontally, putting a new perspective of your whole environment to reach different areas. These were some of my favorite parts of the game as completing each held a sense of accomplishment and each one felt a bit different from the next.

Some points of the game actually possess a light source which can be seen and you can use your spangle to pull the source back and forth, which pulls the shadowy platforms closer to your character. Considering the setting and shadow concept, this further use of manipulating the light source was yet another perfect fit into the game’s overall offerings.

The game honestly plays quite smoothly and beautifully for the whole experience, but there was one gripe of how the overall layout was executed which added a bit of frustration. The first thing to mention of this would be the length of the overall game. Now there is nothing wrong with the game being long as there is well over 50 floors to explore, but things start feeling more of the same about halfway through due to the pacing. Each stage looks and feels different from the next, but with very few boss fights or moments of true completion when going from one area to the next, it can leave the game feeling like you are climbing up a ladder with no end in sight at times.

About a little over half way through the game though, an element is added (which I don’t want to go into detail too much about as it is a bit of a spoiler in my opinion) which changes the gameplay completely and makes that tedious climb worth every second. I almost wish this was added earlier on but I felt it was nice to have a brand new way to experience the game so far in and reaching this feature where the game hit it’s shining moment and kept me playing until the very end. This element of gameplay also opened up many doors and answers all the questions you may have had about certain areas which is of course why I think the developers introduced it so late. After you finish the game there is plenty for completionists to go back and collect as well as backtrack through so overall, many hours can be lost in the shadows and the overall experience as a whole is truly exceptional.

Graphics/Audio
Since environments are made up of shadows from foreground objects, it is important that the visuals actually weave all of the correct textures together to create perfect symmetry, and I can easily say this is done perfectly. At times just playing the game can make you sit down the controller and admire how it almost appears that you are running through a painting. The boy also flows in nicely with the environments, but the cursor or spangle can get a bit in the way at times. Creatures within the game also are all made brilliantly and retain the mysterious charm that pours in on each floor. 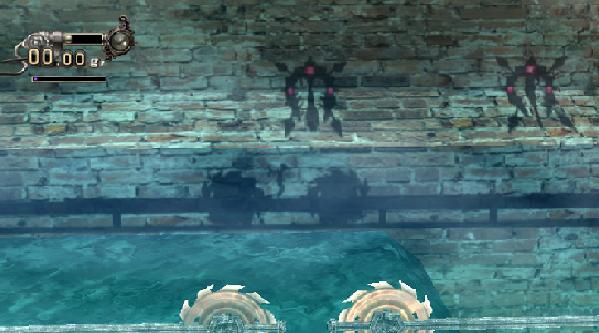 The music is also orchestrated wonderfully to each setting you come across which gives the graphics a soul and set the mood for whatever situation you are in. Sound effects are also well done with enemies each getting their own appropriate cries as well as the environment itself coming alive with creaks and grinding as you move platforms to progress.

Overall
Lost in Shadow is a brilliant concept that was executed correctly. The game plays smoothly and brings new life into the platforming genre while also getting the player to observe the beauty of each area by throwing in some puzzle elements which award you for further engrossing yourself into the setting. The only problem I encountered was the pacing, but the reward for patience is great and the game completely reveals it’s true self upon reaching this point. Throw in the feel of mystery that is very present from beginning to end and Lost in Shadow truly captures the essence and promise of it’s name and concept, which makes this title one not to pass up.

I Give Lost in Shadow: