Overview:
Often a game comes along, full of so much vibrance and life, that one can only wonder; is this from Japan? A large majority of the time, the answer is yes. Little Dreamer is one of these games. It is a vibrant lively game and it is from Japan. But is it only for the Japanese? Does it hold up for Western players? 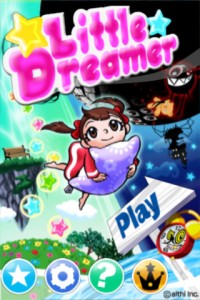 Little Dreamer is a simple game underneath all of the shiny colours and cutesy characters on screen. It is a platforming game in the vein of Doodle Jump or Icy Tower. You have to climb or bounce your way through the world to reach a goal. This is a game type that works perfectly on iOS.

The controls are easy to grasp, taking little time to become second nature. They are perfectly responsive and incredibly simple. You control the entire game with the simple slide of a finger. These are the type of games that should be on the iOS, simple pick up and play games, that don’t require mastering a complex control system that tries to do too much with the touch technology.

This game is simply a master class in what iOS gameplay should be – simple and fun. This is where Little Dreamer ultimately succeeds. It can be played by anyone and anywhere at anytime. That is the essence of iOS gaming.

Storywise, Little Gamer has a story you’d come to expect from the crazy folk in Japan. It tells the tale of a little girl named Amy, whose Teddy Bear is bearnapped by a Demonic Cyclops Bat from the Nightmare Realm. Amy decides to reclaim her Teddy Bear by flying into the world of dreams with her magical pillow. It is a story that doesn’t really matter to the game, but it’s a story full of quirky charm.

Charm is something that this game embodies. It is perhaps the most charming game on the iOS platform and for that alone is worth a look at. The gameplay is also charming in it’s own right and overall is just a game that is fun no matter how many times you pick it up. 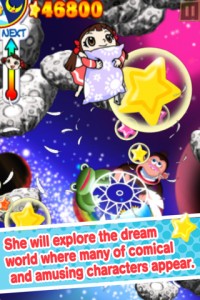 The graphics are well designed and very cute (or as the japanese say ‘kawaii’). You can tell a great deal of love and care was put into the games design and although it at times can be a little cluttered on screen, it never becomes a problem. Instead it becomes part of the games limitless charm.

In general Althi Inc. have done a great job with the visuals of this game, creating a memorable heroine and appearance of the game overall. For this memorable and visually pleasing imagery, Althi Inc. should be applauded. Not since Angry Birds and Tiny Wings has such a memorable character and world design hit the iOS. It’s simply a huge achievement.

Audio:
The music and sound effects of Little Dreamer are of incredibly high quality for an iOS game. They are well produced and set a perfect mood for the game. Whether it is a peaceful bounce through the dream world or a terrifying dash out of the nightmare world, there is a track waiting to encapsulate the right atmosphere and feel for what it is occuring on screen.

The sound effects are equally as good, with Amy’s gleeful squeals as she soars through the air being easily memorable alongside the Demonic Cyclops Bats dark cackle at Amy’s attempts to reclaim her precious Teddy. It is all so well done, like the visuals. Althi Inc. has invested a great deal of effort into this game and it really shines through brightly through-out the game.

Conclusion:
In closing, Little Dreamer is one of the best games available on the iOS with little to fault it upon. Althi Inc. have done an amazing job here, bringing a very Japanese styled game to Western audiences. I can safely say that Little Dreamer is worth every cent and is indeed a must have for the iOS.

I give Little Dreamer: