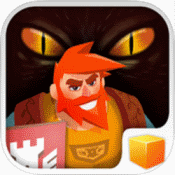 Overview
People may not be well aware of it, but the Fortix franchise has been saving kingdoms one line at a time for several years. Developer Nemesys Games graced the world with the original tale of the Line Knight in April of 2010, following it up with a well received sequel the following year. Now with the help of mobile publisher BulkyPix, Nemesys is bringing their baby to iOS devices. How does it stand up? Does Line Knight Fortix claim victory or should it be cordoned off from the world? 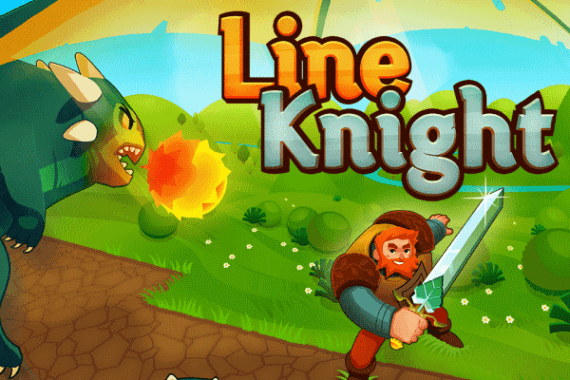 Story
You are the renowned knight Sir Fortix. The evil wizard, Xitrof, has cursed the islands of Artalom and now trolls, dragons, and more control the lands. Can you win back Artalom, vanquish your foes, and unravel Xitrof’s curse? 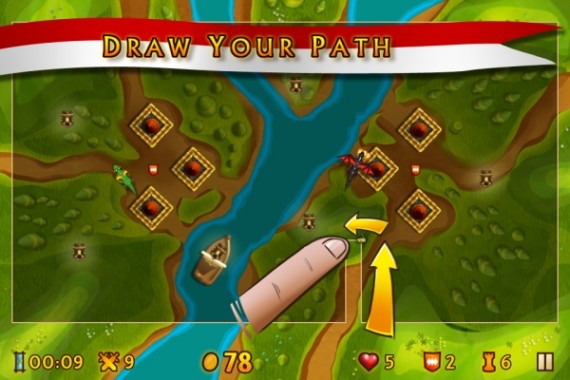 Gameplay
As the name implies, Fortix is Line Knight and thus conquers his foes with right angles. Much like the classic game Qix, you are tasked with taking over territory by enclosing as much of it as you can within the lines you form.

Fortix starts each level on the “base line.” Using your fingers to control directions, you can have him leave the base line to run around. When Fortix returns to the base line, everything he surrounded becomes conquered land, and the lines he formed become part of the base line.

The game very quickly becomes much more than simply conquering territory. Dark, dangerous foes roam the lands and will take you out any chance they have. Trolls, dragons, and more will go after Fortix any time he leaves the base line. Cave bats  patrol the base line, ensuring you’re constantly on your toes. 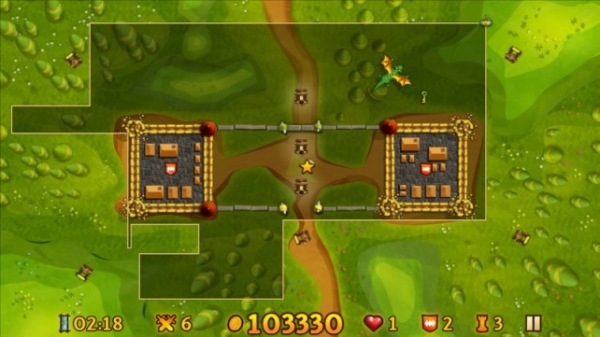 Beyond foes, the structures and lay of the land both work to keep Fortix from achieving his mission. Stone walls will prevent your passage and turrets all over the world will fire cannons when Fortix tries to make his move.

Though Fortix himself is a small target, a single strike to the line he’s creating will send a surge toward our hero, killing him if he fails to reach a base line in time. This creates a fantastic push-and-pull mechanic, encouraging you to be thoughtful as you maneuver through cannon fire and enemies. Utilizing your anticipation can be a powerful weapon for our hero.

Fortix is not entirely alone in his fight to save the world. He’s able to capture cannons to destroy enemy turrets, take keys to unlock doors, and take power-ups that can turn the tide of desperate conflict. 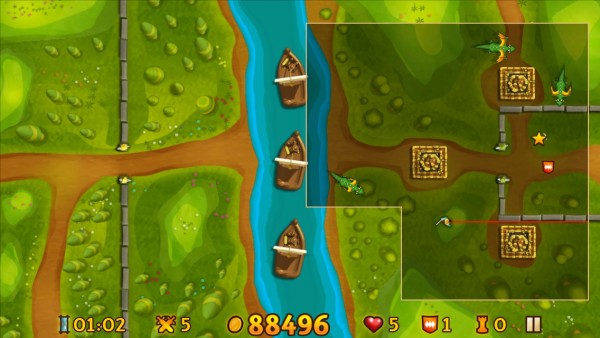 There’s quite a lot to play here. The current release of the game gives you three worlds, each containing 15 levels that will take you a few hours to work through. It also appears that they plan to support the game post-launch with even more levels (much like Angry Birds or Cut The Rope did).

Line Knight Fortix is a fun experience, but it’s not without its flaws. On older hardware, the game sometimes became slow and unresponsive, ignoring input and causing deaths that could have been otherwise avoided. With the camera zoomed in, this seemed like less of an issue, but it was a significant annoyance nonetheless. Loading times can also take a few seconds, which is miniscule in the grand theme of things, but jarring when so few games seem to be plagued by it in this day and age. 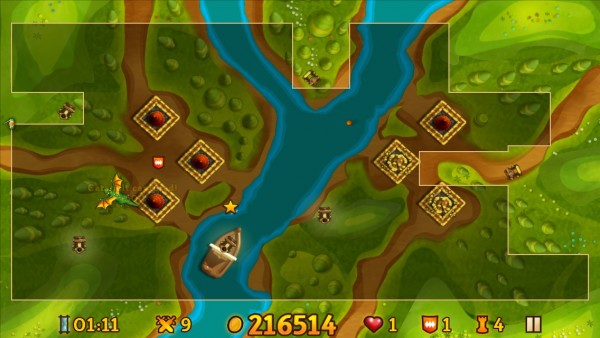 Visuals & Audio
Line Knight Fortix is a fun, colorful game. It’s bright, simple graphics do a wonderful job conveying the puzzling landscapes you’ll have to conquer. The animation is simple but effective as well. Each world has its own unique aesthetic to keep things interesting as well. The sound design in Line Knight Fortix can go largely unnoticed. The music is upbeat and adventurous, but little more is of note.

Overall
Overall, Line Knight Fortix is a fun, challenging strategy puzzle game. The visual style is simple, but serves the game well. The game also boasts a wealth of content with the promise of even more to come. The mobile port of the franchise has a few problems, especially on older hardware, but the gameplay is tight and entertaining.  Fans of puzzle games, strategy games, or the Fortix franchise will find it well worth the time and money.