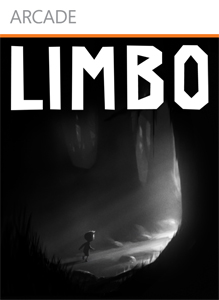 Story
“Uncertain of his sister’s fate, a boy enters LIMBO.” [Via Xbox.com]

I don’t like starting out with something bad about a game, but since I start out describing the story of a game in all my reviews it is going to be inevitable. Limbo literally has no clear story. Seeing as how the Xbox.com excerpt is one line long and completely sums up the entirety of the game, you shouldn’t be expecting much of a story. If you want to jump straight to where I talk about the rest of this awesome game skip this section.

Let’s take a look at the story of the game from someone starting out. The game throws you straight into a strange world, which is assumed to be Limbo based on the title of the game. The player must then progress forward and solve puzzles to keep moving through this strange world. There is no clear reason for doing what you are doing unless you read the Xbox.com description.

Not knowing the purpose of where you are going isn’t a bad thing though. The mystery adds to the overall feeling of the game. The problem lies when the story is never actually explained. I went through the entire game waiting for something awesome and deep to be explained, and the game just cuts out without any real explanation at all. The ending is awesome and short, but still doesn’t explain anything. There might be some possible meaning behind the entire game that people will philosophize about, but if there is then I completely missed it.

Gameplay
The entire gameplay of limbo is linear with obstacles blocking you way every minute or so. A good way to look at the game is to view it as a whole bunch of small puzzles all connected together in one single campaign. There is a checkpoint at the beginning of almost every puzzle, and then the entire game is split into a bunch of bigger chunks so that you can replay any puzzles you want by simply selecting the chapters.

There are a bunch of puzzles, and each one is quite unique. There are literally no two puzzles that are solved the same way. There are tons of different elements in the game, and each puzzle will combine other puzzle elements. Once they are out of elements a new one is thrown in, and others are taken out. Later in the game older puzzles are brought back in combination with newer ones. A lot of the puzzles have to do with timing everything right, while others have to do with using certain items that you wouldn’t expect to use. There are a huge amount of puzzles and I don’t want to ruin the game by giving them all away, but I could make a pretty massive list of all the types of puzzles.

There is a lot in the game that will kill you. The first time I started playing I continually died at almost every new obstacle because I didn’t know it was dangerous. Since everything kills you, exploration in the game is extremely limited. This tends to hurt the game, but after you get passed the inability to explore anywhere the game becomes more of a puzzle game and you go from one puzzle to the next to solve them. The first time through the game it is easily expected that everyone will die a lot. Trying to figure out a lot of the puzzles requires a lot of trial and error.

Since the game only uses the joystick to move and then has a jump button and a use button the game is easy to pick up for anyone. The easy controls also force the puzzles to be more abstract in order to remain fun. Every puzzle you know what to do, the problem lies in needing to find out how to do what you need to do. A lot of the time you even know what to use and in what way to use it, but getting the job done is challenging and may take a lot of players a while to do. The direct solution is usually not the correct one.

Audio & Graphics
The audio and the graphics are where this game shines. While the story is almost nonexistent and the gameplay linear, you will continue playing this game simply to see what you get to look at next. Each new area is beautiful. The artwork is simple but it creates an overall unique feeling that is quite satisfying. The game is also located in Limbo, so it creates a slight out of this world feeling.

Throughout the game audio is playing in the background. This audio is extremely quiet and slightly creepy. This audio effect almost forces the player to play in the dark and in an extremely quiet environment. I don’t know if it was intentional, but by creating that effect the game is able to pull the player into the game quick and then keep them there. Throughout the level the audio will increase in volume, tone, or speed. These moments signify an increase in some aspect in the game. Many times it will signify a need to speed up due to some danger, or an increased risk to your health. There are also nice little “body mutilation” sounds whenever you die. Depending on how you die, the game will use a corresponding sound which makes many deaths real ugly the first few times you die that way.

The graphics in the game are also brilliant. Although it is extremely simple, the black and white scheme helps create mood and remove the player from reality. Since the game takes place in Limbo it helps place the player in the location to better experience what is going on. The black and white scheme also helps hide many traps and is actually what creates a multitude of the puzzles. Deaths are also extremely nice. Since death is abundant in the game (and you will die a lot) it is a nice touch to have such a nice looking death. I even began feeling sorry for the poor guy after he died for the 10th time in the exact same spot.

Achievements
The achievements in Limbo are flat out brilliant. There is one story based achievement worth 100g and is a pretty good reward for simply playing the game. The others are based on miscellaneous tasks throughout the game. These tasks actually put much more replay into the game. Aside from the achievement that requires you to beat the game in one sitting while dying less than 5 times, the rest are decently easy to get but really hard to find. Scattered throughout the game are these egg things that you must break in order to unlock the achievement. Finding these eggs are extremely difficult and are on the path but hidden very well. Sure, you could look up every single location for easy achievements, but where is the fun in that?

There are also 2 avatar awards that can be unlocked.

Overview
While the overall game is pretty short and a majority of the puzzles can be solved after about 5-10  minutes of pondering, Limbo is still an extremely beautiful and enjoying experience. The Audio and Graphics absorb the player into the game and create a beautiful and compelling game to traverse through. The puzzles themselves are interesting and quite fun to solve. Based on skill level the games puzzles could be difficult or easy, but even if the puzzles are easy for you Limbo is a very fun game and an even better experience to partake in.
I give Limbo