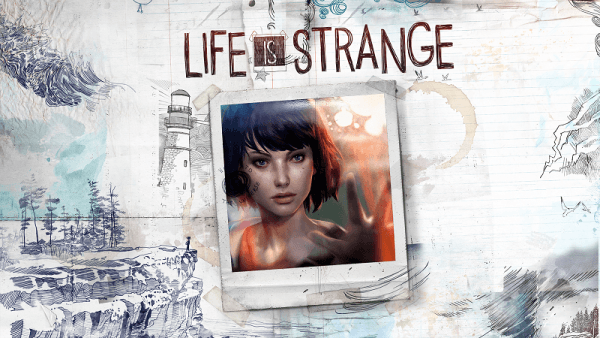 The first episode of Life is Strange (full review here) was a pleasant surprise in the episodic narrative genre, focusing on relatable issues such as bullying and friendship with a touch of supernatural elements in an awesomely detailed world. Episode 2: Out of Time has now been released and I’m happy to say it manages to continue the fine example set by the first game as well as throw in some shocking surprises and fun gameplay twist. This review contains no spoilers. 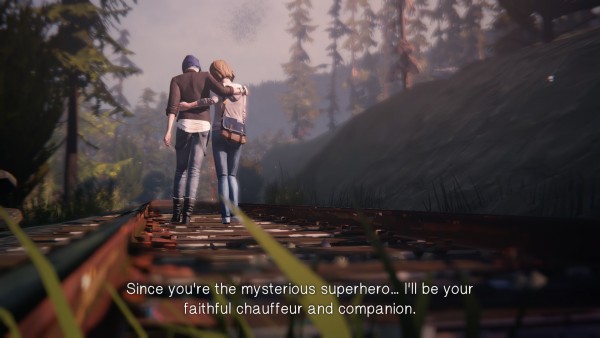 Episode 1 introduced us to the ‘small town’ vibe of Arcadia Bay, the school of Blackwell and Max Caulfield’s new time bending powers. Episode 2 expands on everything established in the first episode, delving deeper into the lives of other students as well as Max, your best friend Chloe and even the town itself. This world is so full and lovingly crafted and really feels lived in, a very important aspect of this game to help ground it and make the world feel believable. The game world is also littered with intractable objects you can make, all accompanied by Max’s thoughts, literally giving you insight to how Max thinks and interprets the world in her head.

Max is a very fleshed out character and best of all, she’s your character. The choices you make in this episode have some pretty big impacts on the world around you and the choices you made in the last episode really seemed to matter here, especially during character interactions. It might be the whole illusion of choice thing but it does seem like some parts of the game you hear or play through would never have taken place if you didn’t make some of the choices you did earlier in the game. 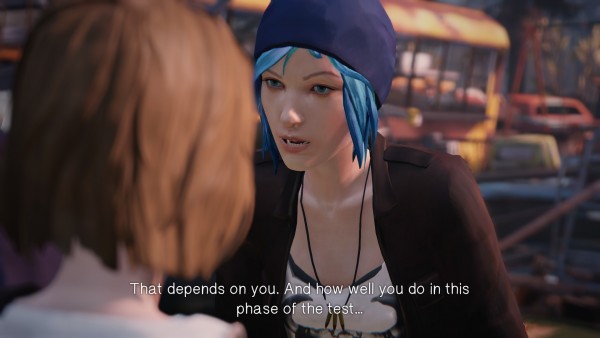 It’s hard to talk about the story further without spoiling it but there is an excellent, relatable tale to be told in Life is Strange. Themes many people have experienced in their life such as friendship, bullying, fitting in etc. are present here and it’s great you get to call some of the shots as you might not have had that ability in high school. Episode 2 doesn’t further the main threat we learned about at the end of the first episode or delve much deeper into Rachel Amber’s disappearance, but it deepens character relationships, expands on Max’s character and powers while also setting up a few more mini story lines that will most likely come to a head over the coming episodes. There’s also some big moments that bring the whole episode to a close.

The dialogue isn’t perfect as there are a few times that lines don’t really make sense within the context of the conversations they are spoken in or the writing seems out of place for that character however these instances are pretty sparse within all the dialogue in the game. 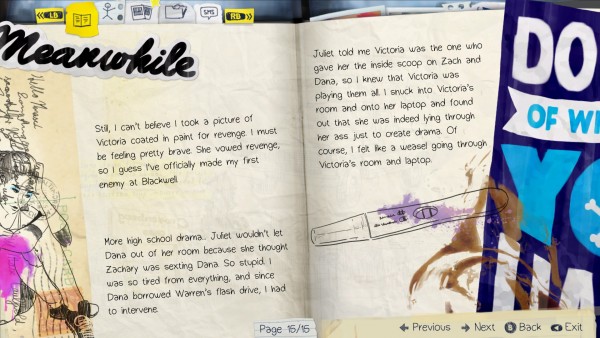 Like in the first episode, a fantastic addition to Life is Strange is all the optional story you can read up on through text messages, diary entries and character biographies. The game does a great job at providing you with the necessary information to understand the main story upfront, but for those who are interested in really delving into character histories and past events and Max’s thoughts on everything you can do just that. The journal is presented in this cool scrapbook style, really making it feel like an art students diary.

Life is Strange will rightfully have many people drawing comparisons between itself and Telltale games, as well as titles like Heavy Rain and Beyond: Two Souls. Life is Strange and those games are for the most part very similar, perhaps being more similar to the latter titles as you can freely move around your environment to interact with objects, people or move on to a new area. A small appreciated touch in Life is Strange is the ability to perform a light jog to help you move faster as opposed to being stuck in a slow walk all the time. 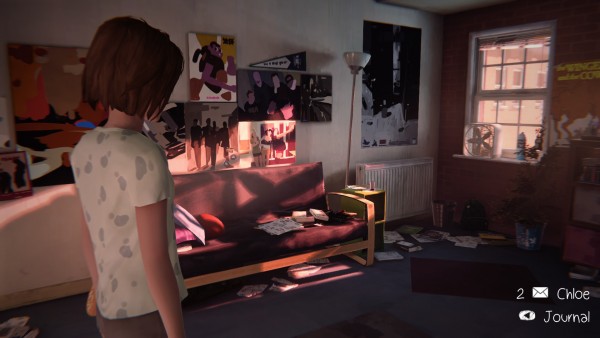 You make choices from up to four options in conversations (normally just two), some of which look like they will have a major impact on the story. The options you have in these conversations often change depending on past actions and you can often rewind them if you are not happy with your answer. While there are a lot of smaller decisions that simply alter dialogue or make your tree grow instead of shrivel (which are still fun in there own right), there are also some big decisions to make here and this is where your emotional investment comes into play and you get to feel like a big shot making all the calls.

When you’re not walking around interacting with the world, you’ll be using your time powers to solve puzzles that are well implemented into the story. There are a few of these sprinkled throughout episode 2 and I solidly enjoyed them. Some are challenging and will require you to rewind to remember something or pay more attention to a specific detail you may have glossed over earlier. There is no limit to the amount of times you can rewind time in these instances and some puzzles have multiple solutions allowing different approaches. There are also moments your powers will fail you and these moments are some of the most tense as you can’t rely on retrying. The game does a great job of making you become dependent on your time powers, so you really feel it when it isn’t there. 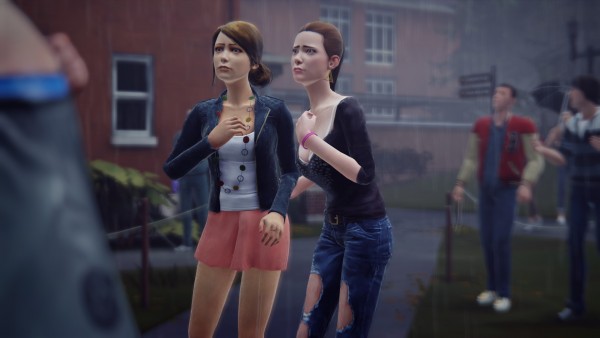 The time functionality has been implemented excellently by Dontnod. It is not only used to solve puzzles but allows players to reverse decisions they may wish to take back (within reason). People that love to see every possible dialogue option play out will love this feature. If you do rewind through a conversation, next time you have that conversation you can simply use the skip button so you don’t have to listen to the same line again. Another nice touch is an auto rewind for your most recent function you can activate with a simple button press. Also there is a big scene in the game where this feature is really fun to play with but I won’t spoil that for you.

The visuals in this game are kind of like a 3D water colour painting with lots of soft tones and visible brush strokes. It looks great and details on characters and the environment are impressive for an art style that appears simplistic on the surface. Environments are incredibly detailed and have just as much personality as the characters within them. The PC version has plenty of options for visual settings and my version suffered no performance issues with my time in the game. 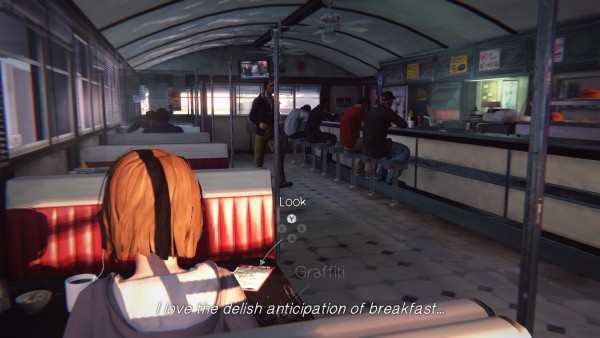 The interface is very clean and has this whole ‘Juno’ feel to it for those familiar with the film. White squiggly line drawings pop up to represent objects you can interact with and also when the game is saving or you have made a consequential decision. When you perform a rewind the visual effects used are really powerful, user friendly and aren’t slow or clumsy. The same can be said about performing a fast rewind or skip and put polish on the already near perfect time control system. The freedom of the camera movement is fun to play with and allows you to set up screenshots in lieu of a proper photo mode which seems like an odd omission for a game based around a photography student.

One big negative that is not easy to overlook however is the lip syncing. It does seem slightly better (or maybe I just paid it less mind this time around) than in episode 1 but is still a big issue for the game, especially as there are a lot of moments where the camera is focused on someone’s face a lot of the time. This is a ‘budget’ title but it doesn’t stand up to the standard set by similar story based titles such as Heavy Rain. 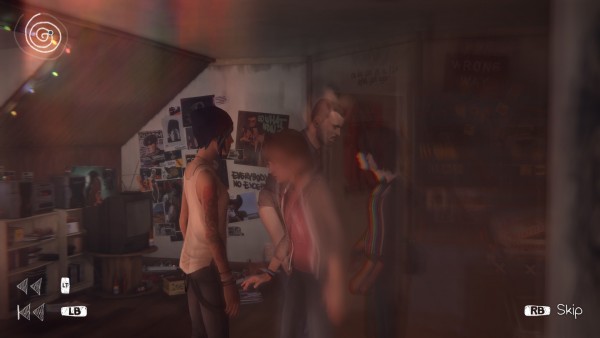 The game doesn’t have a big soundtrack, with most of the games music being diegetic and playing through headphones or a CD player, however the licensed tracks that accompany the games opening and closing scene as well as some parts in between is perfectly melded to the visuals. I mentioned Juno as a reference before and the audio here also takes some inspiration from the film, with the indie acoustic songs heard here giving off a pleasant, relaxing vibe that compliments the game perfectly. 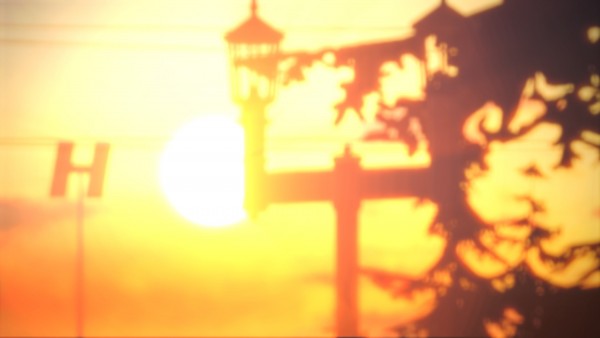 The voice acting is really good for the most part, with lines delivered well and character’s voices matching their personality from the shy Max to the hard ass veteran security guard or creepy janitor. No sound effects are out of place and complete the wonderfully detailed world.

Episode 2 takes the great world and characters established in Episode 1 of Life is Strange and continues to expand upon them. The story has a great balance between intense moments and exploration with the highlight of the story definitely coming with this episode. The choices you make feel impactful to crafting your own story as well as the character of Max and the time bending tasks the game lays out for you are both challenging and fun to complete. Complete with beautiful graphics and a perfectly fitting soundtrack, Life of Strange manages to place itself right up there with some of the best of the episodic narrative genre. If you liked Episode 1 definitely pick up this one.