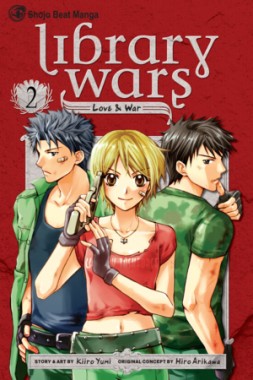 Overview
Library Wars started out slow and calculated, introducing us one by one to the line-up of potential princes for our feisty protagonist Iku, all the while laying foundations for things to come. The early goings had a great deal of potential to make for what could be a very special shojo manga. Now here we stand with volume two of Library Wars and little has changed. It remains a promising series, but one that has yet to find its footing or direction.

Story
Volume two begins to start the engine on the plot, with Iku and the rest of the Library Forces finally engaging in actual combat, making the ‘War’ part of the title have a sense of purpose that it didn’t have in volume one. While the first volume spent the majority of its time introducing us to the cast and the world they live in, volume two lets us get to know them more, exploring their relationships to one another and the world around them in greater detail.

Of particular interest in this volume is the connection formed between Iku and Tezuka. In volume one Tezuka was little more than a bad boy that had an irrational sense of jealousy towards Iku. This volume expands upon Tezuka in some interesting ways, giving his character more depth and personality. His relationship with Iku is likewise further developed, marking Tezuka as a potential prince for Iku, the girl who is trying to find her prince that touched her face (that is her goal in life it seems).

The combat sequence in this volume, while long-awaited came off as amateurish at best. Yumi is clearly out of her depth when it comes to action scenes. The raid chapters were far from engaging and lacked the punch that it needed. The framing was not handled well and the pacing of the action was far too slow. This is a shojo manga and it is understandable that action is not always a big part of this genre, but Library Wars marked itself as a series with action from the very concept alone. This is war? I don’t think so. There needed to be greater emotional stakes to the battle, but there was never any doubt that Iku wouldn’t be just fine. There is a possibility that Yumi can improve her action scene writing over the coming volumes, but for the first real battle of the titular war, it rang hollow.

Artwork
Much like last volume, Library Wars is a solid job in terms of artwork. It never takes any risks, instead opting for the very safe shojo aesthetic that has been done to death now. It isn’t a bad thing, but for a series with a high-concept like this, it couldn’t have hurt to try something a little more daring. It is worth mentioning that while the action sequences are poorly written and paced, they are well drawn. However there is the unfortunate sloppy framing that can confuse what is happening at times. All in all it is a middle-ground that I hope Yumi can move away from. She needs to go all in with Library Wars, but there is just far too much hesitance of her part to do something radical, which is a shame in every single way.

Extra Content
Volume two of Library Wars comes with a pleasant amount of bonus content. This volume features in-between chapter 4koma gag strips (a type of four-panel mini chapter), bonus chapters at the end of the volume and of course the author comment at the end. Yumi comments in this volume about her friends playing a prank on her in the guise of Dojo from the series. It was a humourous little spot in the volume and definitely a change of pace from her nerve-riddled ramblings in the first volume about whether she was up to task of adapting Library Wars into manga. This volume features less extra content than volume one, but that is bound to continue on as we dive deeper into the series.

Overall
Library Wars volume two is ultimately a mixed bag. It still shows the potential of volume one, but it has yet to do anything with it. The concept of the series is quite interesting but Kiiro Yumi doesn’t dare to do something different in terms of art and story telling structure. It is a by the book shojo manga, that needs to commit itself more to its high-concept and have the confidence to take some risks creatively. There is a long way to go for Library Wars. There is a lot of room for improvement. It is a long road ahead, but one I will continue travelling with Iku and her would-be princes. It looks like the war has just begun.