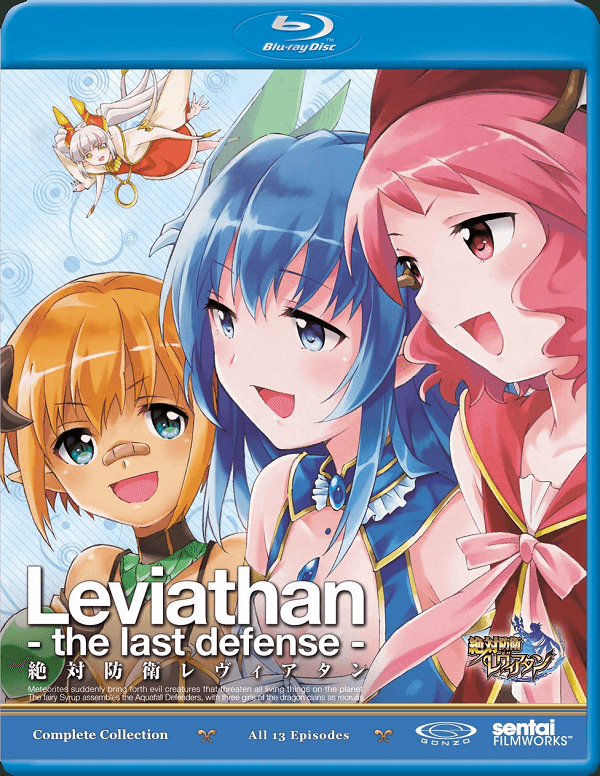 Overview
When an anime is created to help promote a game, it can range become something memorable, even anime based around card games. Sometimes these series stand out on their own; other times they are simply an advertisement used to advertise a game. The case of Leviathan – The Last Defense is a bit unique however as the game it is based off of was a digital iOS game by GREE in Japan that actually was released as the anime aired. As such, is Leviathan – The Last Defense more than promotional material?

Story
The world of Aquafall has been a prosperous land where fairies, dragons, dragon-girls, and other magic beings have thrived for years. When meteorites begin falling on the world, strange creatures called Lucasites began pouring out of them with a mindless intent to destroy anything they come across. However in the town of Haruna, very few are preoccupied with the thought of this danger, choosing to send scouts out to investigate, and most of the residents continue to live out a peaceful life. 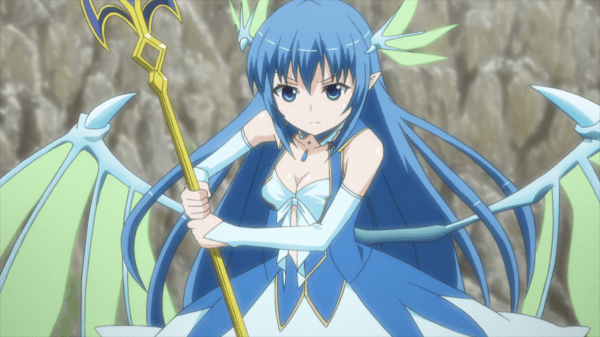 A girl named Leviathan is one of the few affected by this threat as her beloved older brother left one day and has never returned, though his spear appeared reappeared and is now her only memento. While out practicing her water magic, Leviathan accidentally blasts a fairy named Syrup out of the sky and the tiny fairy takes it as fate. You see, Syrup is trying to rally forces to fight against the threat the world is now facing by organizing an Aquafall Defense Force and thanks to Leviathan’s magic powers, she seems like a great fit.

When the incredibly strong and athletic Jörmungand and pampered but skilled with fire Bahamut also meet with Syrup, the group is assembled. Or so it would seem, but the story of Leviathan – The Last Defense is about as heavy as a feather. The first few episodes of the series serve as a way to introduce viewers to each of the three girls as they go about their days generally ignoring what Syrup says and any effort in actively trying to fight against the Lucasites. 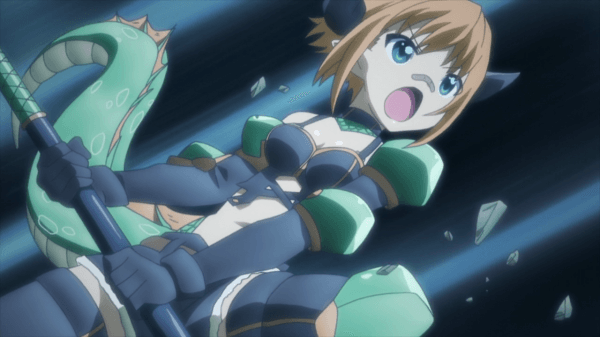 In fact the first actual battle they intentionally fight against these creatures is attempting to retrieve Jörmungand’s battle axe from inside of a swamp dragon’s stomach. For some time after that every fight is mostly a matter of circumstance as the girls encounter a creature while trying to do something else instead, such as have a barbecue on a beach.

There are some moments that the story takes a bit of a serious tone, but Leviathan – The Last Defense never becomes anywhere near as dramatic as it may look. A cave-in with trapped family members may seem as serious as it can get in a show like this, but even then the tension is sapped away from the cutesy attitude of Syrup and the dimwitted nature of the other girls as the danger becomes an afterthought and success is always a given. 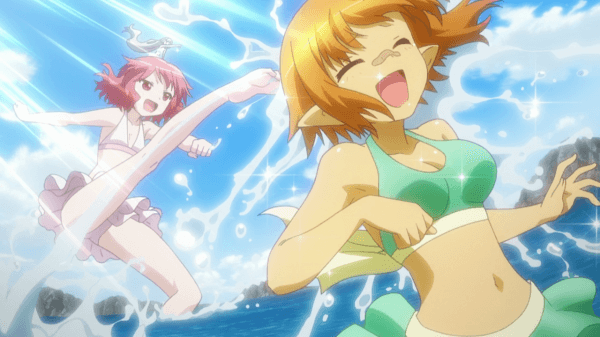 It is interesting that the fairy of the show is called Syrup mainly because that is the best way to define Leviathan – The Last Defense, since it is a show that is sugary sweet with little consistency but just enough to keep some form of a premise held together by adorable, albeit one note, characters. These characters are what make the show worth watching for those who want something simple to enjoy as the plot is far from the best aspect, though a few RPG style elements used later on are a nice little touch.

By the end of the series, Leviathan – The Last Defense does find itself with a very simple resolution, which is more than one generally gets for a series based off a game, but it still is lackluster considering the problem with the Lucasites is far from over and as the girls learn, the danger they pose to the world is a reality that needs to be faced, even if there are plenty of threads left hanging when the credits roll. 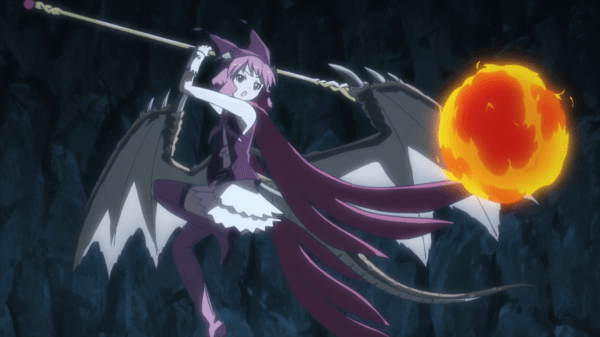 As mentioned each of the characters in the series are overly cute with Leviathan being a quiet and solemn girl who loves barley tea and her missing brother, Syrup, the happy go lucky fairy with a bottomless pit for a stomach, Bahamut, the pampered princess who is always having tantrums about the girls’ situations, and the energetic Jörmungand who is ready for anything. Bahamut and Leviathan go through a few small developments in the show but nothing ever goes deep or dark in this light-hearted fluffy series.

Visuals
This is a series that thrives on color and moe girls being one of the selling points of the show and Leviathan – The Last Defense pulls that off quite well. The environments that the girls travel through vary decently enough and have some detail, but the highlights are the girls themselves as they are all designed to ooze cuteness at every turn. Of course this does bring with it some problems with odd looking limbs and it is pretty clear from the onset that the show had a low budget and the animation mirrors that fact. The cute aspect of the show also helps eliminate any concern for overt fan-service since, despite there being a beach and hot spring episode, the girls always have scale underwear that randomly appears and disappears depending on their clothing. 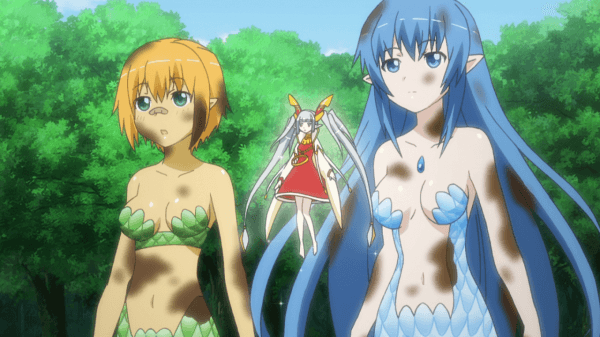 There are also magical girl style transformation sequences for each of the three girls as they assume their more powerful dragon-girl forms and these are presented nicely, although they seem to be used to pad an episode’s length at times. It is worth noting that Gonzo has used a decent amount of 3D CG for the series as every Lucacite creature is presented in this form, as well as the larger dragons, making them look incredibly out of place, and at times even the girls are shown in 3D CG while fighting the creatures.

Audio
It is worth noting that Leviathan – The Last Defense has been released with English subtitles accompanying the original Japanese voice track. This isn’t much of an issue however as the voice work from the Japanese voice actresses work well for the series and fit fantastically with the cute character designs. 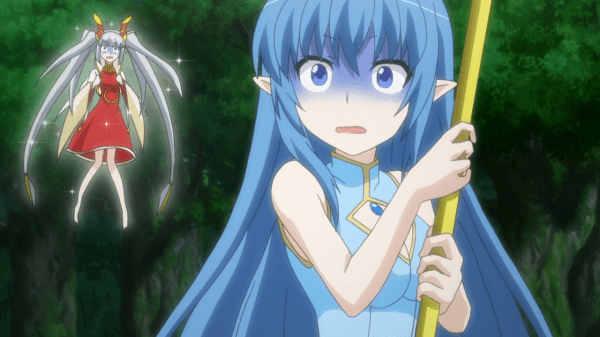 The background music throughout the series is fairly simple and airy which fits the series, but also makes it forgettable at times. That being said, the opening theme “Hajimari no Resolution” by Yuki Kanno is a very impressive sounding opening theme that tries to present the show as a more serious series than it really is. The closing theme, “Truly,” by PASSPO☆, is a fairly standard ending theme for a fantasy series such as this.

Extras
Leviathan – The Last Defense: Complete Collection is a very bare bones release as far as special features are concerned. The only bonus content on the disc are clean versions of the opening theme and ending theme as well as trailers for a few other Sentai Filmworks releases.

Overall
Leviathan – The Last Defense is a cute light-hearted story that provides some nice brainless entertainment. It asks very little of its viewer and provides a good time all around with nice doses of comedy and just enough story to hold itself together. Unfortunately this isn’t enough to really make it stand out in anyway but those looking for an airy series to simply enjoy will probably find Leviathan – The Last Defense to their liking.