Have you played Doodle Jump? Then you’ve played Let’s Jump. Simple as that.

Oh, fine. I guess I should elaborate on that. Let’s Jump functions as a decent enough iPhone app, and has the potential to be addictive, although I didn’t feel it myself. It’s a polished game, and it looks distinctive. The problem is, it’s a fairly shameless clone, unmistakably cut from the same cookie-cutter as Doodle Jump, just decorated with different coloured gum-drop buttons. 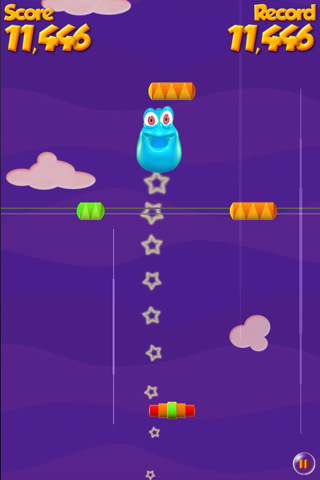 In theory, every game should be judged on its own merits, ignoring any (obvious) influences. Unfortunately, the nature of the games industry is that for every super successful game, there are dozens, if not hundreds, of lesser titles that swarm out of the woodwork soon after, trying to feed off the crumbs. Let’s Jump is, unfortunately, one of the swarm, and despite emulating the simple gameplay of Doodle Jump rather well, it will likely not see anywhere near the same level of success.

But relentlessly comparing it to another title isn’t entirely fair. I’ll let you make up your own mind. The gameplay consists of guiding your little blob creature up an endless tower of small platforms. Miss one and fall, and the highest point you reached is saved as your high score. So, you get back up there and try to beat it. Simple. The controls are intuitive enough, utilising the gyroscope of the iOS devices well. The blob will bounce repeatedly on its own; all you need to do is tilt the device to direct it left or right.

Sounds ok so far, right? But replace the word “blob” above with “doodle” and I’ve described Doodle Jump as well. Oh, see? I’m doing it again! I really can’t help it. 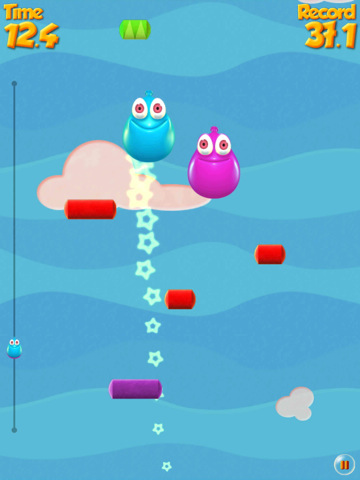 Let’s Jump has no enemies, which in Doodle Jump could be dispatched with a tap on the screen firing a projectile of some kind. In fact, apart from platforms that will break on contact, Let’s Jump has no obstacles. The main point of difference between the two is Let’s Jump‘s implementation of a multiplayer component. The two player Race mode is an interesting feature, but seems like something Doodle Jump would include in a free update or a second version of the original game, and doesn’t seem to warrant a new IP. Basically, two players can race to a set height, either by passing the one device back and forth, to race against ghosts of each other’s last session, or connecting via Bluetooth or online to race simultaneously. Unlike the single player mode, which is endless and keeps score based on the height reached, the multiplayer scores by who reaches a certain height faster. If you have a friend with the game on their device, this could be what sells the game to you; there is some fun to be had here. If you’re on your own, the Race mode won’t hold your attention long.

The too-familiar gameplay could be excused if Let’s Jump had an interesting new setting or art style. Unfortunately, there isn’t much here either. The blob creature is quite cute, looking like a water bomb with expressive eyes and mouth, but other than that, the game doesn’t have much in the way of personality. Its colour scheme is bright and basic, with a blue background and character, and mostly red platforms. This gives the game the appearance of targeting a very young audience. Doodle Jump at least had a unique setting, as the character bounced his way up someone’s notebook, complete with ragged edges, drawn-on enemies, and rips in the paper to avoid. It wasn’t too childish, and even hinted at the kinds of times you would play it –when bored at school, for instance.

The sound is also nothing to write home about, with rather forgettable music and nothing more than simple bouncing sound effects. The only unique sound seems to be when your blob guy falls – his little scream is kind of funny. 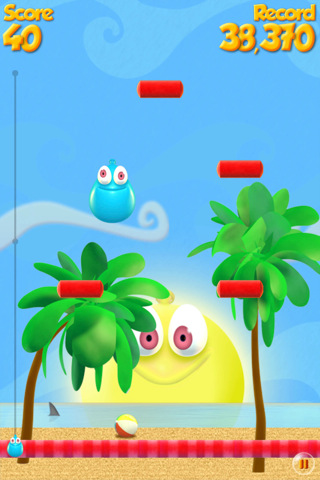 As is the nature of the medium, games are always drawing on previous formulas. Doodle Jump itself isn’t an entirely original concept, owing elements to the old freeware game Icy Tower and indeed, almost any high-score-chasing 2D platformer. But it made an effort to present itself as a new interpretation of an existing concept, with its interesting setting, clever use of the iPhone’s gyroscope, and by being the first major game of its type on the App Store.

So yes, I know it’s not fair to keep comparing Let’s Jump to a classic iPhone title, but when a game is this clear about its influences, it would be a huge oversight to not draw comparisons. Their marketing strategy seems to be based on the hope that inattentive customers will mistake their product for the more well-known one. But while Doodle Jump will be remembered as a classic app for a long time to come, Let’s Jump, like so many other shameless clones, will be forgotten by most in the very near future.

I give Let’s Jump: