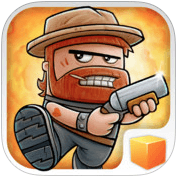 Side-scrollers are possibly one of my all time favourite video game genres. From “Metroid” to “Castlevania”, “Kirby” to “Metal Slug” and from “Megaman” to “Mario”, I love them all! Luckily for some one like me the mobile stores have an abundance of side-scrolling titles to wet the appetite but not all of them do as good a job as they boast. “Lethal Lance” is a game that I feel fits that description, with what seems like some brilliant visuals and an “old-school” gameplay style it’s kind of hard to pass this one up. Thanks to developers “LL Team” and publishers “BulkyPix” I’ve been given the chance to review “Lethal Lance”. Let’s just see how well it does. 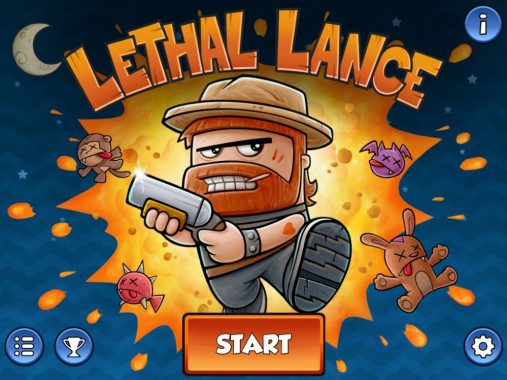 “Lethal Lance” is, for all intents and purposes; a pretty basic game to play. It’s your typical side-scrolling shooter that can be best described as a mix between “Mario” and “Megaman” on an extremely fundamental level. The player is given four buttons; left, right, jump and shoot. That is all, which isn’t bad, as I mentioned; this game is basic. Players are tasked with shooting their way through levels, collecting coins and doing their best not to get hurt while racing against the clock.

Reaching a lamp indicates the end of a level and your score is decided by just how well you did: Having lost no lives (with the game giving you three), having collected all the coins and having reached the end of the stage within the time constraints a player will earn three stars which, may I just add, is a system that a great deal of mobile titles have decided to implement for no reason apart from, what seems like, “Angry Birds did it so I guess we’ll do it too”. 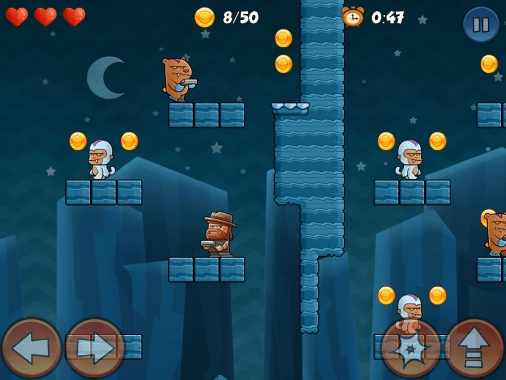 Fully completing stages with three stars does nothing within the game, yes you can choose to share your score on Facebook or Twitter but that’s the fast track to losing online friends so I doubt anyone will dare boast about it to their “virtual” friends. The game really has nothing else to offer apart from exactly what you see on screen; there are no rewards for doing good and there are really no consequences for doing bad apart from a bad score which I’m not sure many people hold in high regard. While it executes the basics of your typical side-scrolling/shooter well…it does become monotonous quite quickly and I believe it is because the developers chose to stick only with the basics instead of mastering and then building upon them. 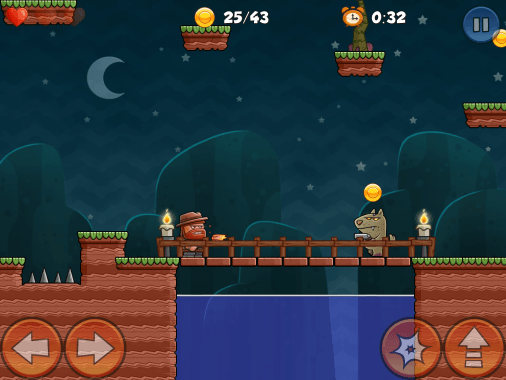 I’ll always give credit when credit is due and I think “Lethal Lance” deserves it for the high quality aesthetics featured within it. While I did go pretty hard on the title gameplay-wise, I really enjoyed the way it look and it was one of the aspects (alongside the audio) that actually kept me playing the game for as long as I did. Not only are each of the levels well-designed but the colour schemes for the different locations are great! With beautiful vibrant colours and crisp animation it’s hard to look at such a title and say it DOESN’T look good.

I’ve seen far too many mobile title developers that put minimal effort into the visuals of their games, luckily “Lethal Lance” does not fall victim to that, instead the developers clearly put a great deal of effort into the games aesthetics and, as a man who enjoys the beauty in life, I can really appreciate that. Animation-wise this game is perfectly smooth like top-shelf peanut butter, honestly the way the background moves in accordance to lance himself as well as the foreground is only comparable to that of running water, it’s fluid in motion and makes for a very nice looking game. 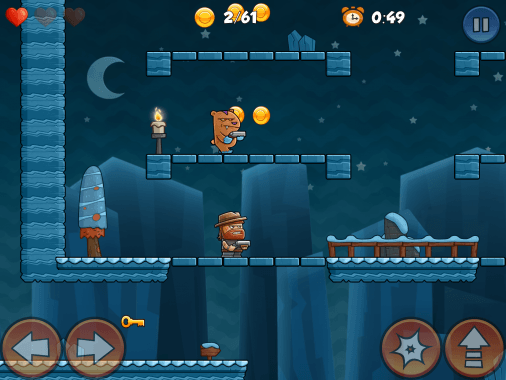 I found myself being quite surprised at just how brilliant the soundtrack for this game was. While many of the tracks did tend to repeat themselves, my love for them did not diminish. The best way I can describe the musical theme for “Lethal Lance” is that it’s mostly “synthpop”. Most of the music was made up by bubbly synthesizer tones and notes which made for some seriously funky tunes that I really couldn’t get enough of.

Not only did it fit the game well but the tracks were just great! You really got a sense for the type of game it was. Even the sound effects were well-made, each and every auditoral aspect of this game was perfectly done, no individual sounds got annoying or lost their hold on me and that’s a massive feat for any game, especially a mobile game of this kind. 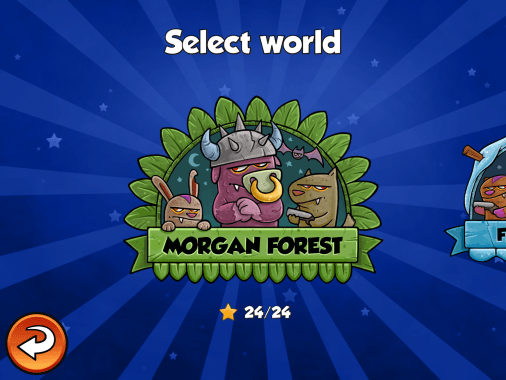 I feel as though the developers chose to keep gameplay mechanics basic so that they could instead focus on both the visual and audio aspects which actually turned out fantastically though it would have been a much better game had they just taken some more time to build upon what they had mastered. Illustrators don’t just master drawing the outlines of different images, once that talent is perfected it’s built upon, unfortunately something the developers of “Lethal Lance” did not do.

In saying that I do honestly believe the audio and visual aspects to have been done perfectly but, at the end of the day, this is a game and a game also needs to have engaging gameplay mechanics. If you’re in need for a simple, good-looking game to play than “Lethal Lance” is for you but don’t jump into this thinking it will scratch all of your side-scroller itches. In end; it’s a brilliant title with some smooth visuals, a fantastic soundtrack but a super basic gameplay style that leaves a little to be desired.