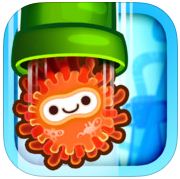 Chillingo is a fantastic publisher that has a lot of great games under its belt, it is one of the very few publishers that I would consider to make almost perfect mobile games. Their attention to detail alongside their attention to the simplicity of a game is what makes them great and their latest title, Let Me Loose, is no exception. The adorable and bubbly aesthetics of the game blend well with the easy way in which the game is played,  it makes for a fantastic “pick up and play” title yet can keep you occupied for hours. 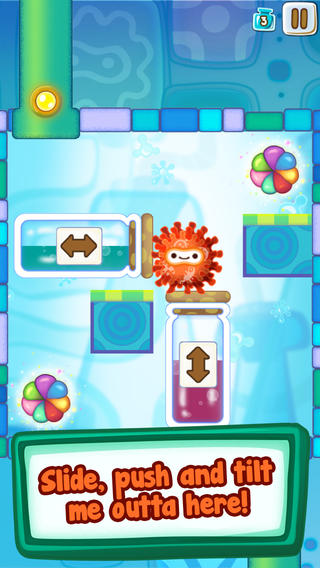 Let me loose does exactly have a fleshed out story, I actually wouldn’t consider it to have much of a story at all but it does have a small intro that pretty much gives you the idea of what’s going on and it just so happens that I’m a big fan of that kind of thing. The beginning of the game is very cute, we’re shown a little amoeba with a silly face and a squishy body, the little guy is trapped in what looks to be a test tube and yearns for the outside world.

That’s basically where your story begins and although it never really comes up again you do get the feeling of adventure and you do get the feeling of progression, the more you go on in the game the more you feel like you’ve almost escaped into the outside world. I suppose the story is in the name, it’s very cute and very quirky and basically gives you just enough of a back story to connect with this little critter. The different environments you play through do reflect the story in some ways, it takes you through different labs which have different obstacles for you to get through and it’s nice to be able to feel adventure rather than adventure being forced upon you. 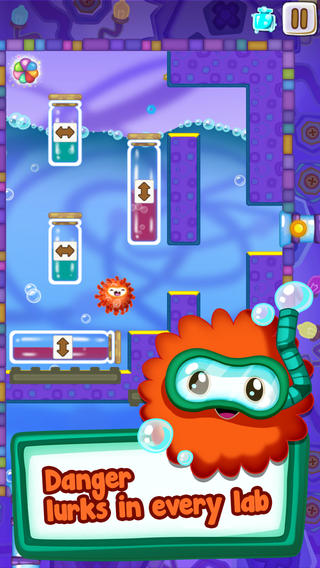 The gameplay is very basic, very easy and very accessible. You play as the amoeba and your only real mission is to collect these rainbow orbs and make it to your destination at the end of the level, collecting the orbs later allows you to unlock the next lab to play through which gives you enough incentive to perfect a level as you play. Controls are also very basic though, once again, they work perfectly for what it is: You start off at the top of the screen and you use the motion controls of the mobile device to tilt the playing-field and to roll the amoeba left or right, alongside the motion controls you also must move obstacles on the screen with a flick of the finger to open up a clear route to the exit and to collect all the rainbow orbs along the way.

The simplicity of the gameplay allows for literally anyone at anytime to play it which makes this a perfect mobile game, you can play levels while on the bus or train, while taking a break at work or even do what I did and play a level while waiting for another game to load, it is literally THAT accessible. I like the fact that the rainbow orbs don’t go to waste, they don’t make you collect them for no reason, they give you an optional task and they make it so that the better you are at completing a level the faster you can access the next one. It makes sense on such a fundamental level and it’s a pain to see that other games don’t seem to have this worked out, Let Me Loose does though and that’s so nice to see.

One would think the constant tilting and flicking would get annoying over a period of playtime but it actually doesn’t, the tilt feature is also very sensitive so you don’t find yourself turning your mobile device almost horizontal just to get our little friend to one side of the screen, it’s very exact and I feel as though it uses the motion aspect of mobile devices extremely well. 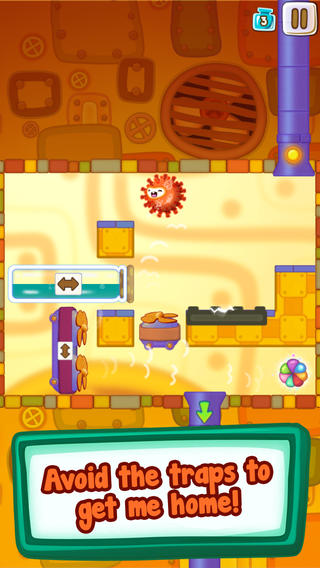 Let Me Loose is an incredibly vivid and colourful game that sometimes seems as though it will literally pop out of the screen. The bright, conflicting colours make for an beautiful, cartoon-like style that I think appeals to both small children who enjoy the bright colours and adults like myself who enjoy a basic yet thought out game, clearly the intention of the developers was to make the game look as warm and inviting as possible and they did it perfectly.

The animation in the game is also extremely good. Something that impressed me above all else is the way that the amoeba character and the liquids on screen move and jiggle as you move the mobile device, they slosh up and squish up against walls in a very realistic and all around adorable way. The layout of some levels make it look difficult yet, once you sit back and have a little think, you realise it’s actually doable. That spit second of doubt is what makes a puzzle game great! 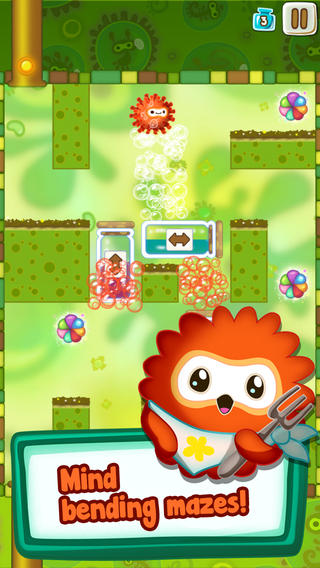 The music tracks throughout the game are all very soft, almost inviting, it welcomes you to play the game and while I may be looking into this too much that is honestly how I feel about it. You play as this goofy, little, orange blob in a colourful world with different liquids in different shaped vials and tubes and the music it just pushes you along to continue playing the game. The music is all electrically made, there’s no real signs of actual instruments and any intruments that are used are very mush played with to turn them into what we hear throughout.

The fact that it is set in a lab also warrants the use of electrically made music, it fits perfectly and for a game to fit together the way this one does is down right brilliant. When I look to the audio of a game I look for how it fits in and, to certain degrees, how suits the game but in some cases, much like this one, it is almost like it slides through the cracks of a game and binds it. It really is the icing on the cake. 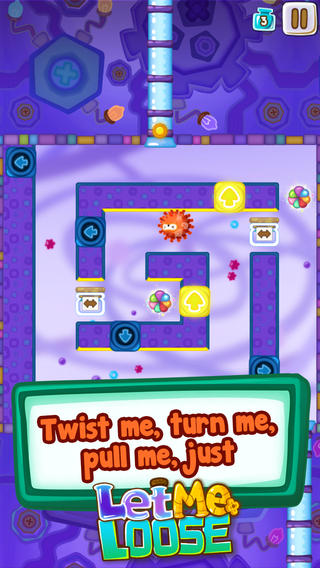 The game is simply great! It is enjoyable for both a young and old audience, it gives you the ability to play for a long stretch of time yet also allows for you to pick it up and put it down almost whenever it is that you please. The way the colours are throughout the game look great and, to a certain degree, feel great. The music isn’t cheesy, corny or annoying in any way and the sound effects are as cute as the little character itself. It comes together fantastically and there really is nothing wrong with this game both on a fundamental level and on a general level. It’s mobile gaming at its finest and another great title for Chillingo to add to its, already great, catalogue. 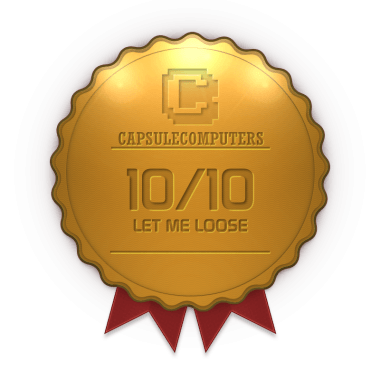